Exhaust 101: Moving Up By Moving Out Skip to content
Top Stories
​

Turbo exhaust manifolds, headers, downpipes and cat-back exhaust systems are all designed to increase performance by improving the exhaust flow out of the engine. On “all-motor” applications, the proper header and cat-back exhaust can reduce pumping loss, increase scavenging and improve cylinder filling to maximize volumetric efficiency, torque and power. On turbocharged applications, a well-designed turbo manifold, downpipe and cat-back exhaust can dramatically improve boost response and power output. Overall, performance can definitely be moving up when the right strategy is employed to get the exhaust moving out.

Ask a group of tuners and you’ll get a host of different answers. No one seems to agree on the merits of tubular exhaust manifolds for turbo applications. Some believe they are the only way to go. Others believe that they work as long as they are a certain length. Still others believe there is no performance benefit compared to a good cast exhaust manifold. We plan to shed a little light on the subject by explaining the logic behind the arguments and then putting an actual vehicle to the test. Proponents of tube headers believe performance can be gained on turbocharged applications by building a header of the proper shape, size and design. A tubular exhaust manifold or turbo header offers a host of advantages including equalization and optimization across the cylinders. 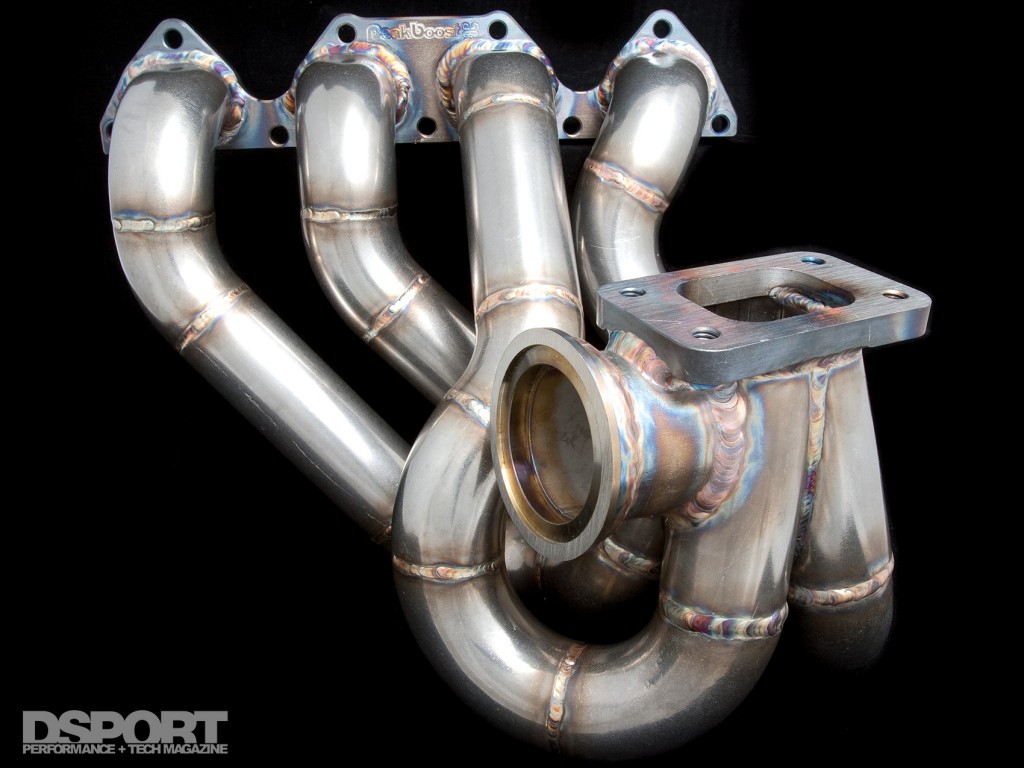 On the equalization front, a turbo header can match the flow and pulse timing between each of the cylinders. If the port area of the tubes and the lengths of the tubes are of equal length with a like number of bends, each cylinder will have a port to expel its gasses under that provides the same velocity, wave and pressure characteristics. As the piston rises on the exhaust stroke with the exhaust valve open, the same resistance from back pressure will be seen from cylinder to cylinder. The amount of work required by each piston to clear the spent gasses from the cylinder will be the same. As witness by many dyno operators, engines that deliver equal power from each cylinder tend to run smoother, stronger and longer than engines with varied output per cylinder. Of course, engines need to be optimized on the intake side also to achieve these benefits.

As for the optimization of power, the designer of a tubular header can vary runner diameters, runner lengths, collector styles and even incorporate stepped designs to maximize the flow of exhaust gasses through the turbo header.

Get SET (Short, Equal and Tubed)

There is one group of tuners that believes that turbo headers have merits but also believe that the shorter the runner, the better the performance. This argument is also supported by the “Go Fast with Cast” contingent of tuners. The Get SET camp believes that longer runners tend to lose too much energy through heat loss. Extremists of the Get SET camp may even place minimizing runner length ahead of equalizing tube length in some instances. This group finds itself sharing beliefs between the extremes of the “Totally Tubular” and “Go Fast with Cast” groups. 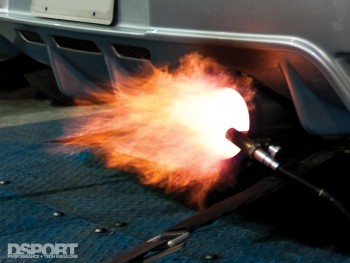 It was our belief going into the test that the tubular exhaust manifold would probably improve low-end and mid-range response. Since the Pro 1 header had equal length tubes, we believed this equalization would make the exhaust pulses more consistent going into the turbine. As for peak power increase, we didn’t expect any major gains on the top end. Our rationale was that the primary exhaust restriction was more likely to be the T28 turbocharger (an upgraded Turbonetics T28 sport turbo) rather than the factory exhaust manifold.

Our pre-dyno theory was half right and half wrong. The turbo header did pick up on the low end and midrange portion of the powerband. However, the header also made significant power increases on the top end. We picked up an honest 20 horsepower and 15 lb-ft of torque on an engine that we assumed was maxed out in power production due to the relatively small turbocharger size.

While this test only represents the results that we encountered on this particular application, we have a new found respect for the power potential of a turbo header. If it worked on this application, it may just be the hot ticket on your turbocharged application.

Making power is always a chief concern, but it is not the only concern that should be addressed. Tubular exhaust manifolds or turbo headers offer both pluses and minuses in the total performance puzzle. In the real world, your engine compartment may not give you a choice in the matter. Other times, improper support of the turbocharger’s weight can lead to extensive cracking of a turbo header. This can add more headaches than the performance gain is worth. If you choose to run a tubular exhaust manifold on a street-driven vehicle, be sure that the weight of the turbo is not supported by the exhaust manifold. Relying on the exhaust manifold to support the turbo will apply significant stress to the runners that can cause the turbo header to fail. For street applications, there may be a better investment to improve performance without a potential sacrifice in reliability. Never overlook the obvious, a set of tires that hook up may make you quicker than an extra 20 horsepower at the wheels.

While you might’ve had the time of your life rocking out at an AC/DC concert, your engine won’t be having...

With the original small block Chevy engines, priming the oiling system was an easy affair. A priming tool was sent...