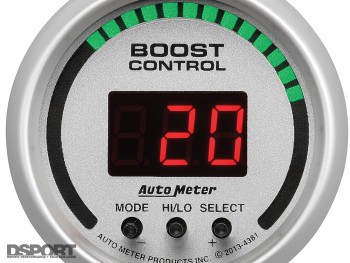 The function of an internal-combustion engine is simple. The engine feeds on an air-and-fuel mixture and, through a process known as combustion, it produces power to propel the vehicle. From a physics or thermodynamics standpoint, this process is nothing more than an energy conversion process. The chemical energy stored in the gasoline is turned into heat and pressure through the combustion process. The design of the reciprocating engine allows it to take this heat and pressure and convert it into mechanical energy (kinetic/motion energy) at the flywheel. Of course this basic understanding leads us to the enthusiast’s most important question “How can I make my engine produce more power?” 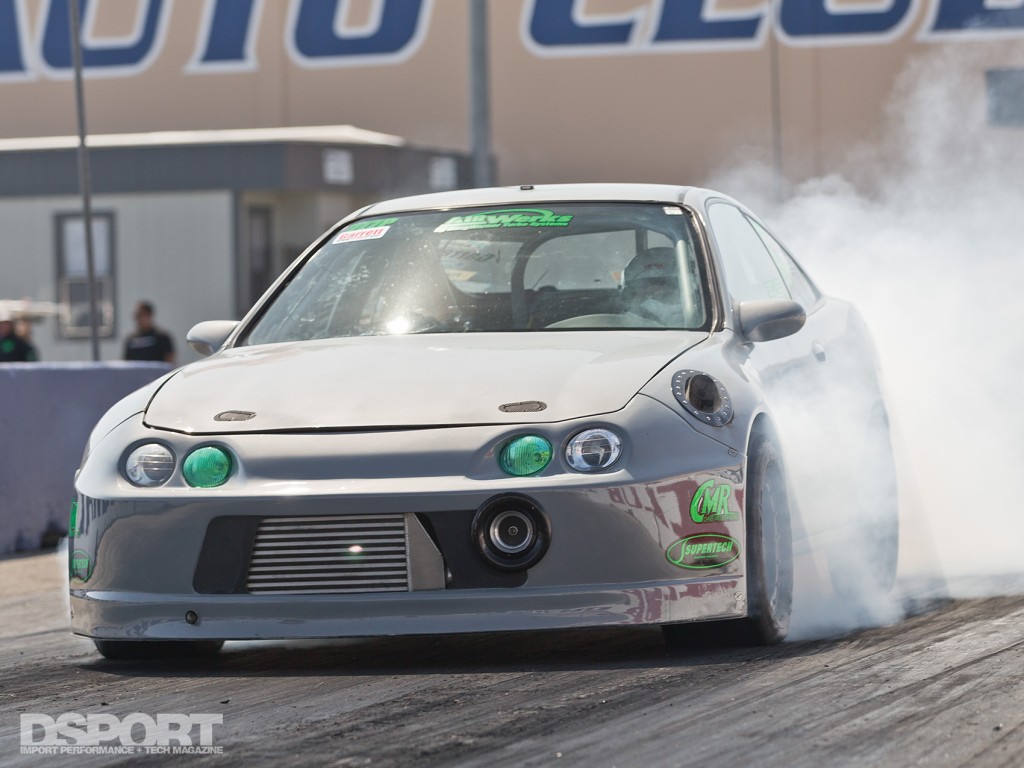 Since energy is neither created nor destroyed but changed from one form to another, the answer lies in figuring ways of getting an engine to ingest more air-and-fuel for combustion. Every engine has a fixed amount of displacement. The displacement represents the total volume of all of the cylinders in the engine. The volume of each cylinder is determined by the bore and stroke of the engine. If modifications can be made to increase the bore size or increase the stroke of the engine, the displacement of the engine can be increased. Unfortunately, increasing the bore and stroke of an engine is not a “bolt-on” affair. This process is generally quite expensive. It is usually undertaken only during engine rebuilds or if the power target is more than double the original output of the engine. This leads us to ask, “What are the bolt-on solutions that produce significant power increases?”

All mechanisms designed for forced induction have the same goal—to force a greater mass of air and fuel into the engine so more horsepower can be made. All types of superchargers and turbochargers have a compressor section that raises the pressure of the intake charge to force more air and fuel into the engine. The major difference between a turbocharger and supercharger is the power source for the compressor. A supercharger uses horsepower from the engine’s crankshaft to turn (power) the compressor while a turbo uses the energy in the engine’s exhaust gas to spin the compressor. Superchargers fall into two major types of design (positive-displacement and centrifugal), while 99.9-percent of turbochargers all incorporate the same basic fixed-geometry design.

No matter the design, all positive-displacement superchargers share a common characteristic. They pump out a fixed volume of air, regardless of the blower’s RPM. Many times this displacement of air becomes part of the supercharger’s name. For example, the Eaton M42 or Eaton M60 have a displacement of 40 and 62 cubic inches, respectively. The TVS1320 has a displacement of 1,320cc for every revolution of its compressor shaft. The result of this design is that boost response comes on in an instant. 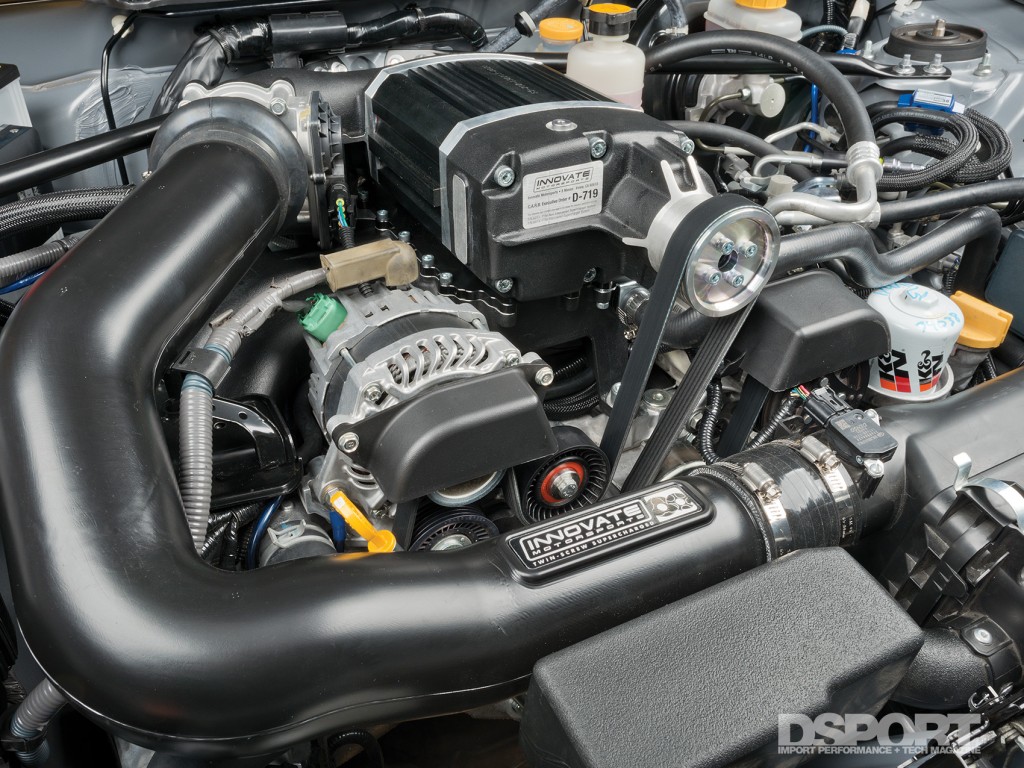 With positive-displacement superchargers, the amount of boost pressure produced at the engine’s intake manifold is dependent on the blower’s displacement, the blower’s adiabatic efficiency, the displacement of the engine, the engine’s volumetric efficiency and the pulley ratio between the crankshaft and supercharger (also referred to as the percent of over-/under-drive). If someone upgrades to a larger displacement supercharger on the same engine with the same pulleys, the boost pressure generated will also increase. This results because the blower is pumping a greater volume of air than the engine can ingest, so the air not making its way into the engine is put under more pressure. 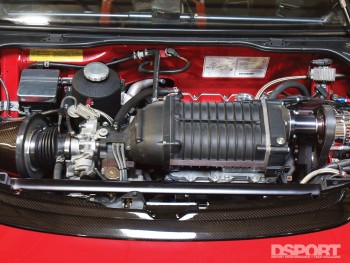 The size of the engine also affects the boost level. As an engine’s size is increased, boost pressure will drop because a greater percentage of the air displaced by the blower can make its way into the larger engine. On positive-displacement blowers, boost can also be adjusted by varying pulley sizes on the engine and blower. In addition to the already mentioned factors, the breathing ability (volumetric efficiency) of the engine also affects the boost level. Engines with ported cylinder heads, healthy camshafts and aftermarket intakes will register a lower boost level than a stock engine. This is because the modified engine breathes as if it were a larger stock engine (from what we already know, a larger engine lowers the boost level). In general, positive-displacement superchargers are unmatched in the area of boost response. As for limitations, positive-displacement superchargers typically trail the adiabatic efficiency of centrifugal superchargers or turbocharger. As a result, charge air temperatures for a particular boost level on a given engine are typically higher than the same engine with a centrifugal supercharger.

NEGATIVES: Generally delivers less peak power than a comparable centrifigual unit. Limited in boost to pulley sizes available. Will rob power from engine when not in boost.

Originally introduced by McCullough (which is now Paxton) centrifugal supercharger systems are the most popular bolt-on-boost solution found on domestic performance vehicles. Today, Vortech, Kraftworks, Power Enterprise and HKS offer centrifugal supercharger systems for imports. These centrifugal blowers have a substantially different boost and performance curve compared to a positive-displacement supercharger. Unlike positive-displacement units which provide the same airflow regardless of RPM, centrifugal units provide airflow proportional to the supercharger’s speed. The effect is usually characterized by not realizing full boost redline. If a centifugal supercharger uses a pulley combination to generate four psi of boost at 4,000 RPM, it will produce eight psi of boost at 8,000 RPM (assuming the volumetric efficiency of the engine is the same at both engine speeds). Critics of centrifugal superchargers consider this gradual boost curve to be the biggest drawback or limitation of a centrifugal supercharger. On traction-limited cars, this isn’t necessarily a problem—in fact, it can be a solution to tire-spinning problems. In the real world, the gradual boost curve could translate into better traction on traction-limited, front-wheel drive street applications. This may also result in better elapsed times. On a positive note, centrifugal superchargers benefit from high adiabatic efficiencies and are easier to be configured with an intercooler system for additional performance and increased reliability.

If you’re interested in building a custom supercharger system around a centrifugal supercharger, give the manufacturer a call to see which supercharger is needed to generate your target horsepower. Also, you need to let the supercharger manufacturer know which way the supercharger will spin when mounted on the engine since the rotation direction of a Honda D/B/H engine is unconventional (counter-clockwise). We’ve seen a number of centrifigual superchargers available for the FR-S/BRZ and expect to see more boost and power as people begin to build the internals of the FA20. 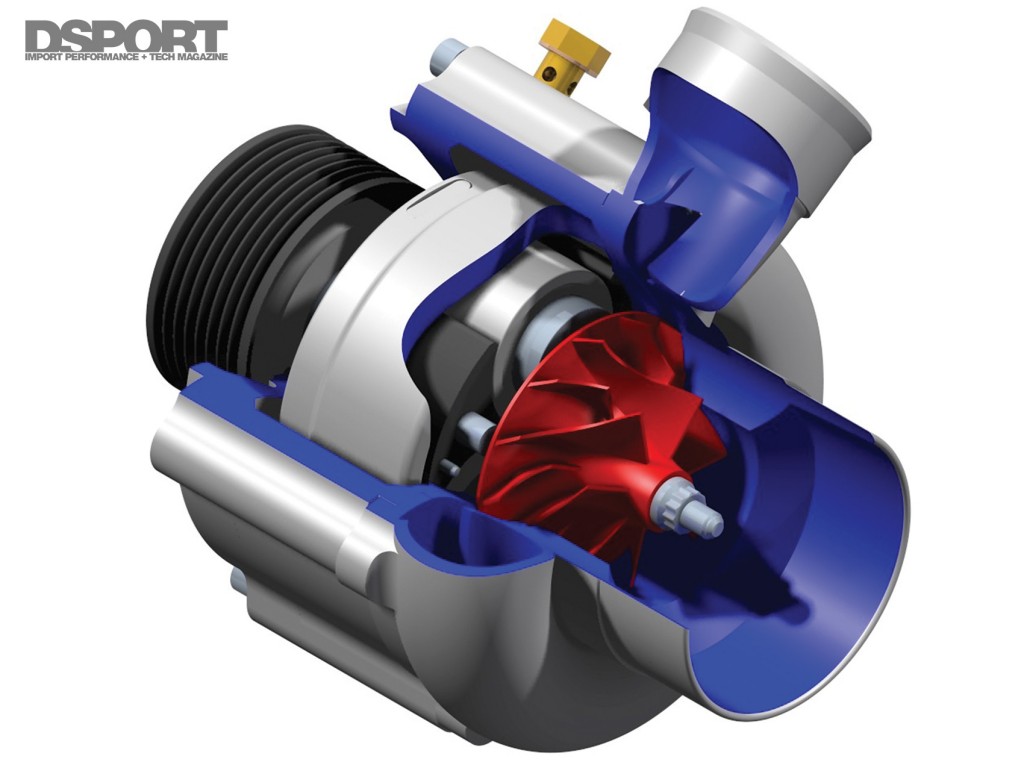 Although a centrifugal supercharger also works to deliver boost by way of a pulley, its use of a compressor wheel makes the boost gradual and dependent on RPMs.

POSITIVES: Generally higher peak power than a comparable positive- displacement unit, high adiabatic efficiencies, and is easier to be configured with an intercooler system for maximum performance and reliability.

NEGATIVES: Gradual boost curve doesn’t permit the same “instant” response power as a positive-displacement unit. Still causes parasitic drag on the crankshaft when not in boost.

Nearly-all turbochargers used for automotive applications feature the same fixed-geometry turbine design. This design incorporates a nozzle in the turbine housing of a fixed size that helps to establish the velocity of the flow of exhaust to the turbine wheel. In effect, it works in a similar fashion to the pulleys that are of a fixed ratio on a supercharger to determine its compressor speeds. 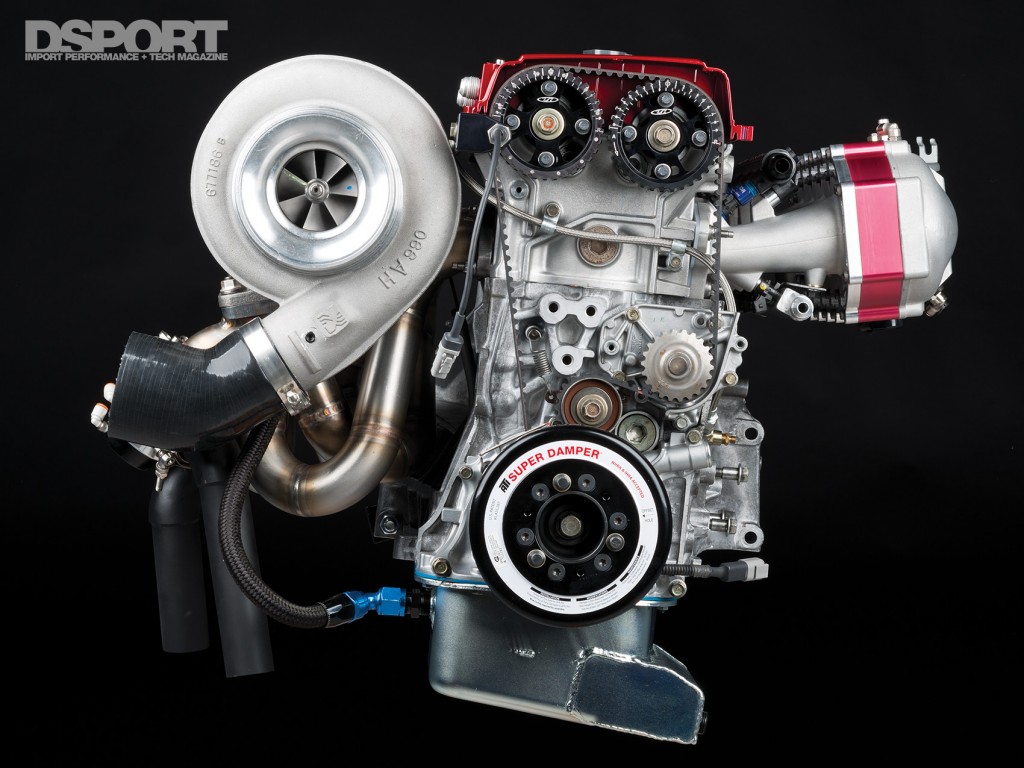 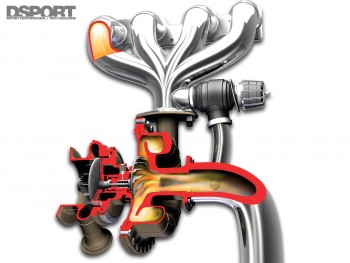 What’s a turbine? Long before steam engines, people harnessed Mother Nature’s energy resources to help do the work. By placing a paddle wheel in a flowing river, the wheel could be used to spin a shaft coupled to other mechanisms to mill grain. A turbine wheel works in the same way as a paddle wheel. In fact, think of a turbine as a paddle wheel for hot gasses instead of a flowing river. Instead of flowing water, a turbine uses the hot exhaust gasses that flow out of your engine on the exhaust stroke. The hot gasses are channeled through the turbine housing to speed up the flow, acting like a nozzle shooting the flow of gasses against blades of the turbine wheel. This causes the turbine wheel shaft to spin. Since the same shaft mounts the turbine and compressor wheels, the compressor wheel spins at the same speed on the compressor side. Rather than relying on pulleys that control the speed of the compressor, modern turbocharger systems use a wastegate to regulate boost pressure. The wastegate reads the boost pressure at the intake manifold and opens its valve to maintain boost at a constant level. The valve channels exhaust flow away from the turbine wheel to regulate the shaft and compressor speeds.