For about a year, AEM electronics has wanted us to get the word out about its X-Series Wideband UEGO AFR sensor controller and gauge. This new series is promoted as being the world’s “fastest responding wideband” in independent testing. AEM Electronics asked if we would publish the results of this third party testing and we politely answered “no.” The reason was simple; we weren’t the third party conducting the test and we weren’t the company paying for the test to be conducted. A laboratory contracted by AEM Electronics conducted the testing. As the advocate for performance enthusiasts across the world, we could not simply republish results that we had nothing to do with. However, we also wouldn’t be serving our readers if we completely ignored a potential great product just because we don’t trust anyone. Ultimately, a compromise was struck. We’d conduct our own test with the X-Series and a few of the more popular wideband UEGO AFR sensor controllers to see if the X-Series was the quickest of our test lot. Before we get into our test procedure and results, let’s first take a look at the advantages of faster response time and how a faster wideband UEGO AFR sensor controller can be used to improve an engine’s throttle response.

Unless you are an engineer of control systems, talking about sensor response time in milliseconds may seem pretty incomprehensible. So let’s take a different approach. Just about everyone has received a burn from touching something hot. The severity of the burn is always related to the amount of time your skin is in contact with the hot object (and the temperature of the object). If you react slowly to contact with the hot object, you get a more severe burn. In this example, your skin is the sensor. The skin’s pain and heat receptors sense the hot object and send a signal through a network of nerves to your brain. Your brain processes this information and sends signals to your muscles to react and pull away from the object. Imagine if the sensors in your skin were slow to react. They would send a message later and the reaction to pull away from danger would also be delayed. The slower the response, the more you get burned. 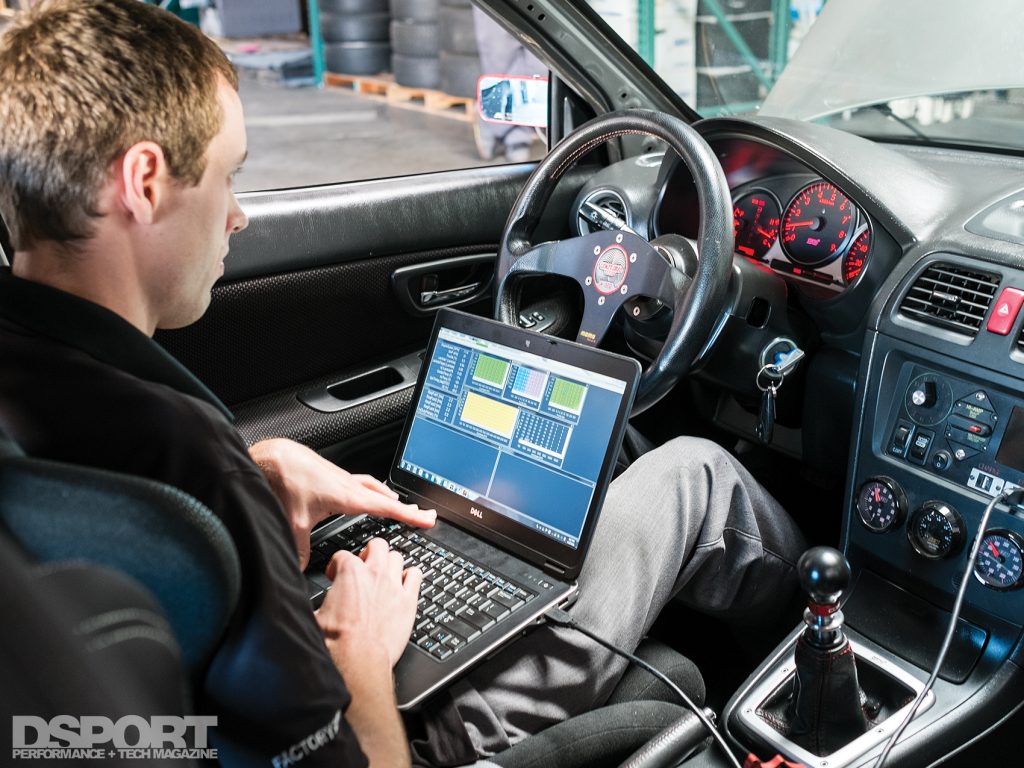 CNS of the EMS

An engine management system and its sensors are the brain and nervous system of a modern automotive engine. Just like in real life, some brains and ECUs are quicker and more powerful than others. What makes one ECU more powerful than another? The more powerful ECUs will often be able to listen to a greater number of sensors, check on what the sensors are saying more often, make faster and more thorough calculations with the data from the sensors and then send the signals to the injectors, coils, camshaft or valve controls, fuel pumps and electronic throttle bodies to do the right thing. Regardless of the ECU’s capabilities, it cannot speed up the response time of any sensor. If you have a sensor that has a 200ms response rate (very slow), the best that you can hope for is getting five unique values from the sensor every second. It doesn’t doesn’t matter if the ECU or datalogger is checking that channel 1,000 times per second (1,000hz) or only 10 times per second (10hz), that slow sensor is only going to be delivering five distinct values every second.

Citing a third-party test, AEM Electronics touts this product as the World’s Fastest Wideband. Since other “reviews” on the products, were nothing more that regergitated press release information, DSPORT decided to do its own testing. Could this wideband actually be measurably quicker than some of the most-respected and popular widebands in the market? 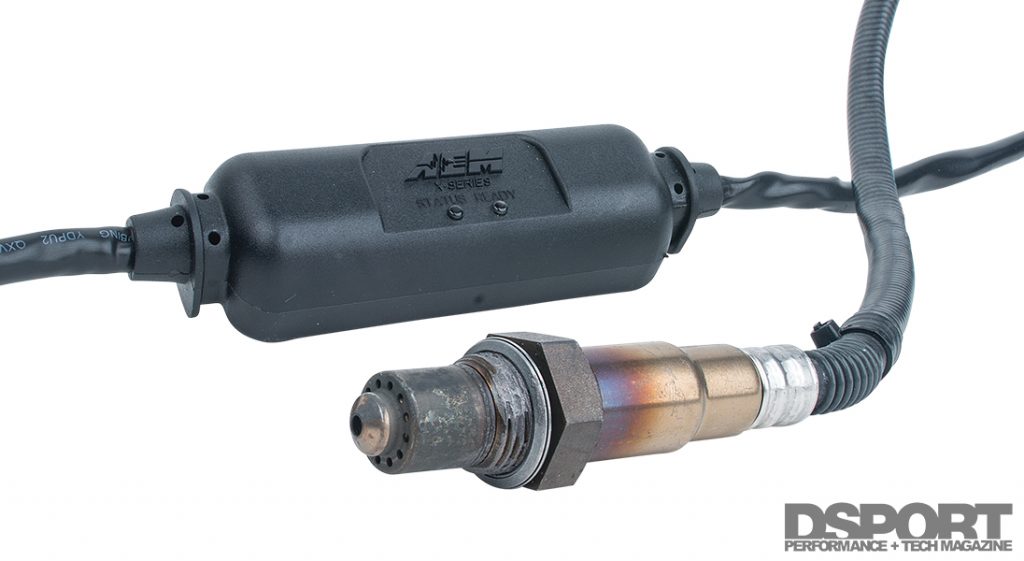 With regard to wideband AFR sensor controller outputs, the test performed by AEM Electronics’ contracted third-part laboratory showed average response times for the 18 products tested ranged from about 20ms to 130ms. Based on those results, the number of unique readings that this range of sensors could deliver would be from as slow as eight readings per second to as fast as 50 samples per second. In other words, the quickest wideband AFR UEGO sensor controller was 6.5 times faster than the slowest in that testing.

We created a dramatic and sudden AFR event by turning o acceleration enrichment and slamming on the throttle. The throttle position is identified by the blue line. The X-Series (light blue line) identified the lean condition first while the WB1 (green line) picked it up about 35ms later while the LC2 (pink line) responded about 60ms after the X-series in this instance. 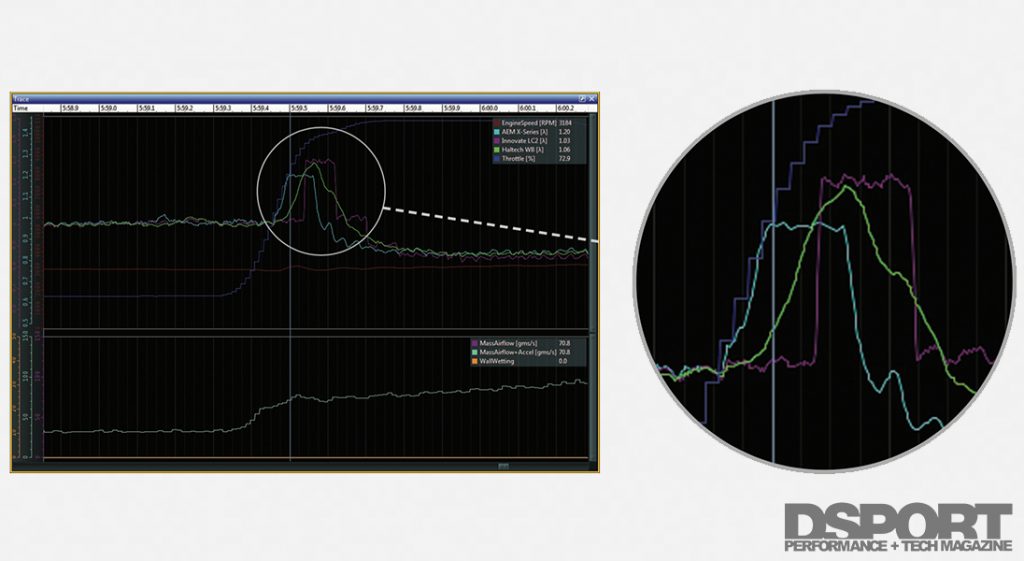 As we began to make the event less dramatic by dialing in the acceleration enrichment, the X-series continued to be faster responding and more sensitive. The WB1 still showed the lean spot, but the LC2 missed these less dramatic events. It appears that the LC2’s output is potential overfiltered to be useful for this type of fine tuning. 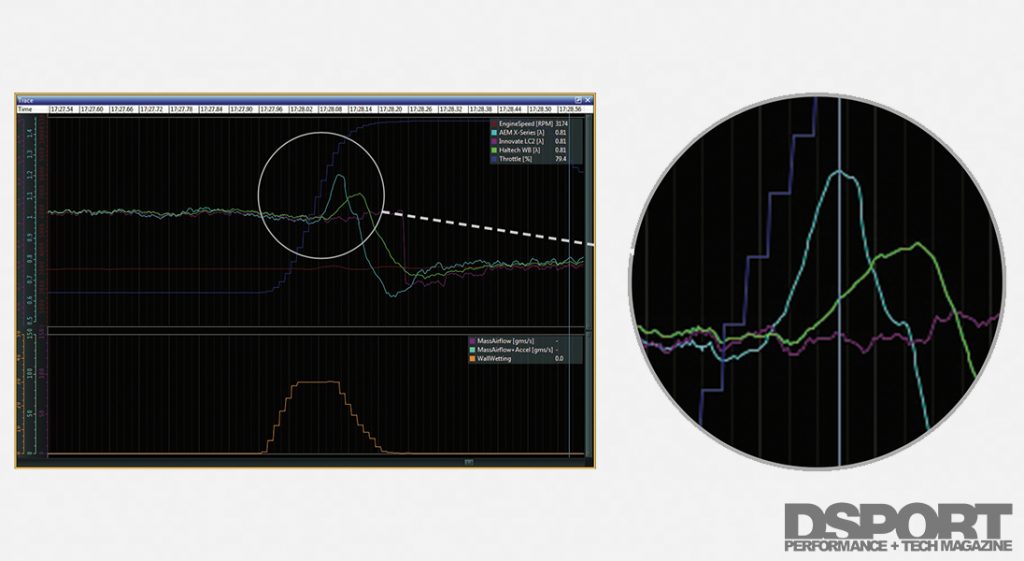 So what is the advantage of having the AFR values being updated at 50 times per second instead of eight times per second? The short answer is the ability to optimize throttle response and to identify light misfires that may go undetected with slower sensor controller combinations. When the throttle is rapidly opened, an engine will hesitate if a shot of additional fuel isn’t added within an instant. In the days of carburetion, an acceleration pump was used to squirt a set amount of fuel when the throttle was quickly floored. Double- pumper carburetors tended to deliver even better throttle response by doubling the amount of fuel by using two accelerator pumps. Modern ECUs use acceleration enrichment or wall wetting tables to deliver additional fuel when the throttle is rapidly opened. Because the initial lean spot resulting from rapid throttle transitions occur so quickly, a slower sensor won’t pick it up. Tuning for what cannot be picked up in a datalog due to sensor lag is a challenge to say the least. Without a fast sensor controller combination, many tuners try their best to set the acceleration enrichments blindly. Sometimes a tuner will get lucky and get the acceleration enrichment fairly dialed. More often, it simply takes too long for a tuner to blindly play with the settings to make it happen. As a result, this is a part of “the tune” skipped over by many tuners. If it doesn’t show up on a dyno pull, it’s not an issue is the rationale. 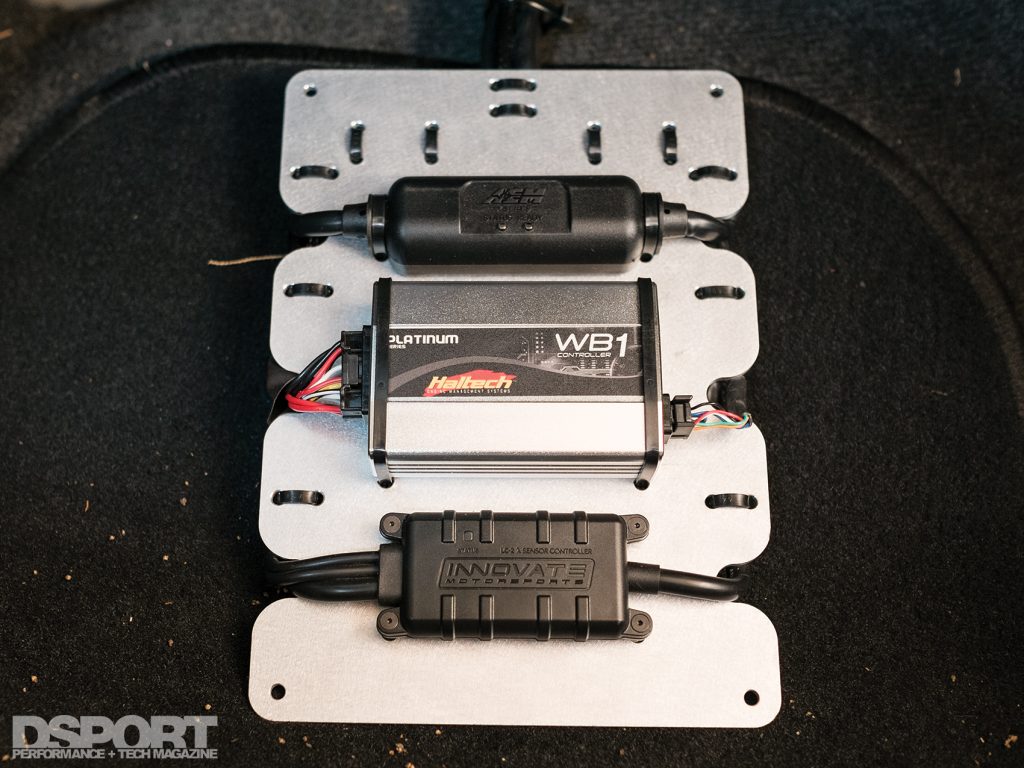 Our goal was to see if some of the trends outlined in the third-party testing could be repeated in our own test. We decided to test the AEM Electronics X-series AFR Controller along with the Haltech Platinum Series WB1 Controller and the Innovate Motorsports LC-2 AFR Controller. We selected the WB1 and LC-2 due to their high popularity and our positive experience with the controllers in the past. The Haltech uses an earlier-generation Bosch LSU 4.2 sensor while the Innovate Motorsports uses the newer Bosch LSU 4.9 sensor (as does the X-Series). The Bosch UEGO sensors were all installed inline with the Innovate Motorsports sensor closest to the engine, followed by the Haltech and finally the AEM Electronics. The difference of two inches per sensor shouldn’t affect response time measurably, but in case it did (or some forum idiot wanted to claim it would without proof) we wanted to make sure the AEM Electronics X-Series had no advantage so it was last in line. Our test would involve seeing how long it would take controllers to witness a radical yet brief event. This event would be a fast mash of the pedal with the acceleration enrichment turned completely off. This incident would cause a temporary lean spike that would eventually be addressed when the AFR normalized at wide open throttle. We would log all three controller outputs 100 times per second to ensure that all readings were recorded. A fast controller would show the lean event while a slow controller would miss it. After gathering enough data on response speeds, we would then use the fastest responding controller to properly tune the acceleration enrichment for optimized throttle response. In turn, we’d return the vehicle to the owner to get his input on the drivability improvement with a properly tuned acceleration enrichment.

When the acceleration enrichment is properly tuned, there should be no lean spot on any throttle changes. An absence of lean spots will keep the engine from hesitation. This will result in crisp and responsive throttle response. Crisp and responsive throttle response will result in improved drivability and smiles so big that they will hurt and distort your face. 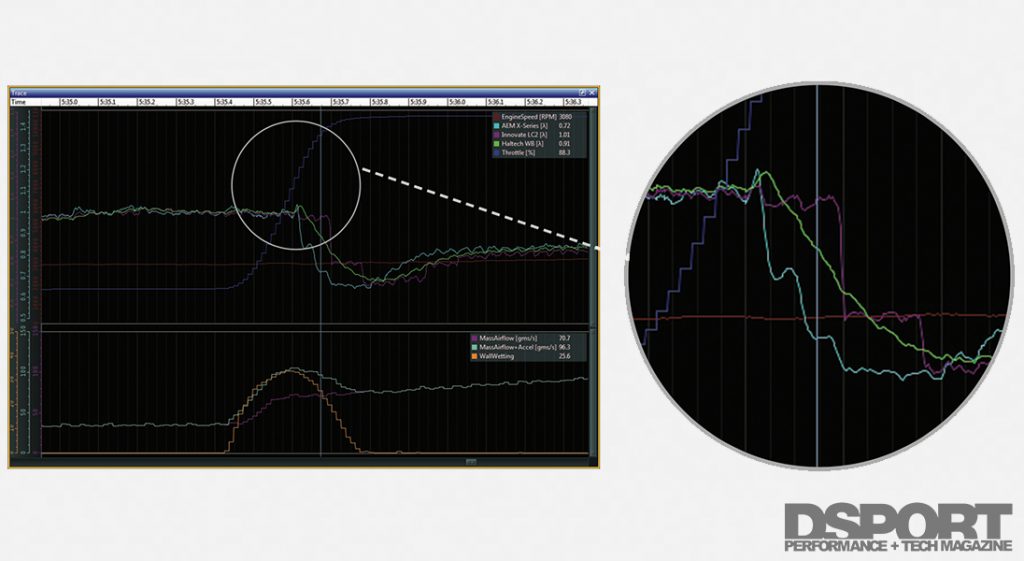 During steady-state operation (when the throttle was not being changed), all three AFR sensor controllers delivered nearly identical readings. At idle, during a fixed part throttle or at wide-open throttle, all three controllers reported the same AFRs. However, when the throttle was blipped, stabbed or stomped on, the AEM Electronics X-Series rarely missed detecting the lean spot. The Haltech caught many of the lean events about 30-to-40 milliseconds after the X-Series, but missed a few completely. The Innovate Motorsports controller was about 60-to-70 milliseconds behind the AEM X-Series, but it seemed to miss more of the lean events than it should have. It was almost as if the output from the Innovate Motorsports was filtered. 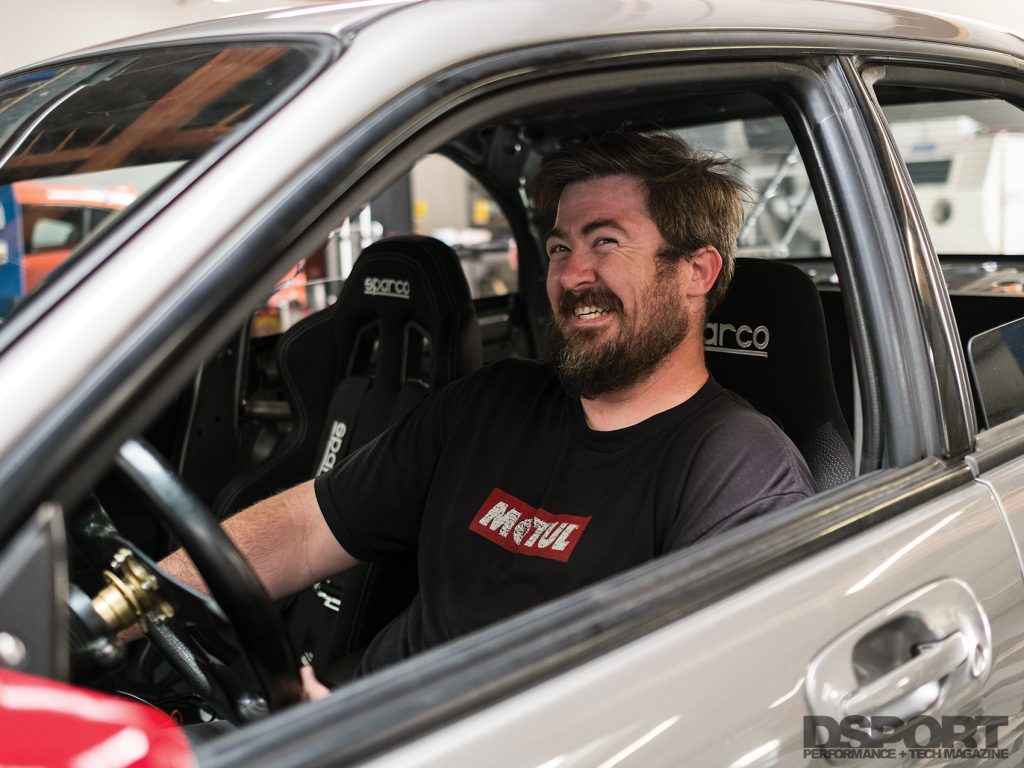 While we didn’t have an opportunity to test all 17 of the controllers tested by the third-party, the AEM Electronics X-Series was the quickest reacting controller of the three we did test. The speed of the X-Series “X-Digital” technology allowed us to see what we may have missed during large, quick changes in throttle. Using that data, we were able to improve the drivability and response of the engine. For anyone that elects to purchase an X-Series AFR controller and fine-tune the acceleration enrichment, you won’t be disappointed with the result. Having an engine ready to crack the whip at a crack of the throttle is a wonderful thing.
On September 8, 2016