When you hear the term “Kamikaze”, you’d probably think of the Japanese World War II special attack units. However, when translated from Japanese, kamikaze means “Divine Wind” or “Spirit Wind”. For a machine to move as if driven by a divine wind, it’s going to need some power, be able to slice through the air and keep the tires planted down the straights and through the turns.
Text by Richard Fong // Photos by Rob Shaw 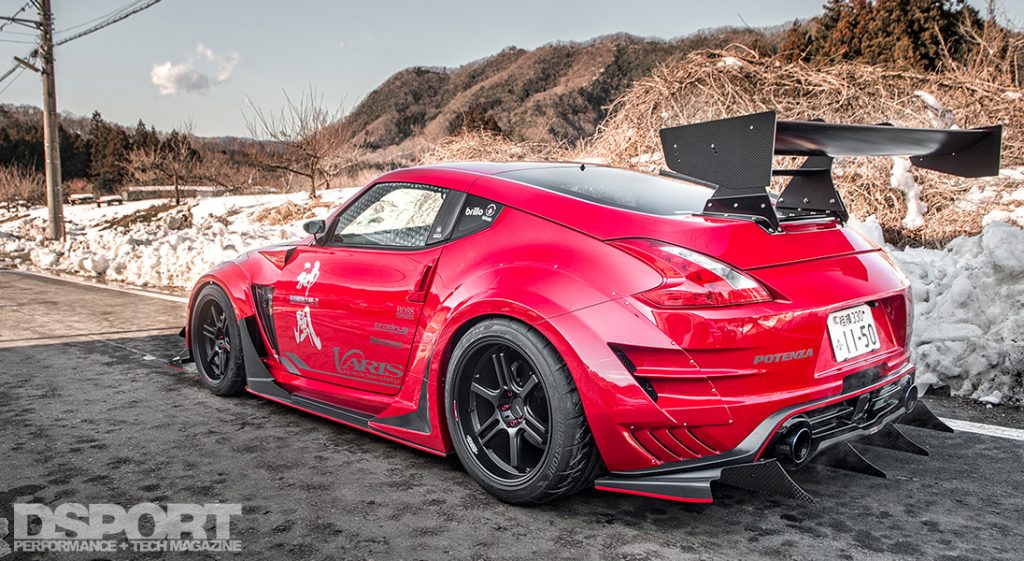 In Sagamihara City, Kanagawa Prefecture, the aero parts specialists at Varis have been busy designing some of the most aggressive and functional aero kits to come from Japan. They started a line of demo cars they called “Kamikaze,” implying the vehicles were motivated by a divine wind. The first was a 1,000-plus horsepower R35 GT-R, dubbed the Kamikaze-R, which went on to set a track record at Fuji International Speedway in 2014. The aggressive yet functional design of the Kamikaze-R added to its universal appeal. 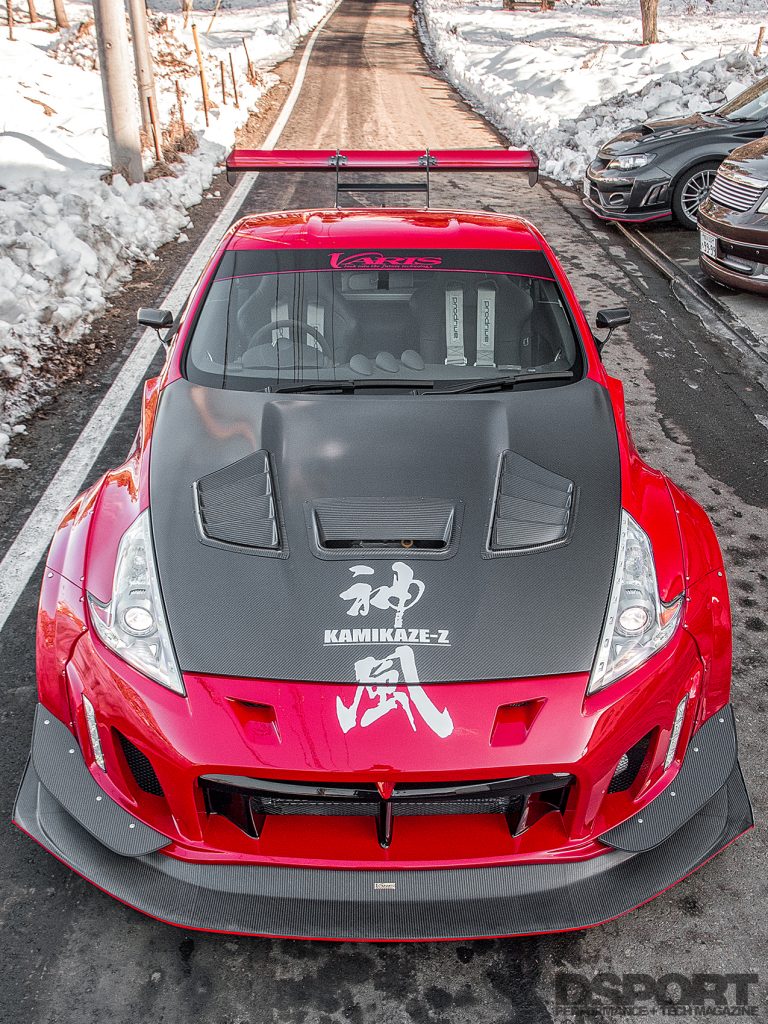 Defining the Next in the Line

In October of 2014, the Varis staff began contemplating the next vehicle in the Kamikaze line. The success of the Kamikaze-R as a time attack and circuit vehicle made choosing the Z34 Nissan Fairlady Z a logical choice. Since the Fairlady Z, like the GT-R, has also enjoyed a storied history as a Japanese sportscar, it seemed the right platform to build up next. 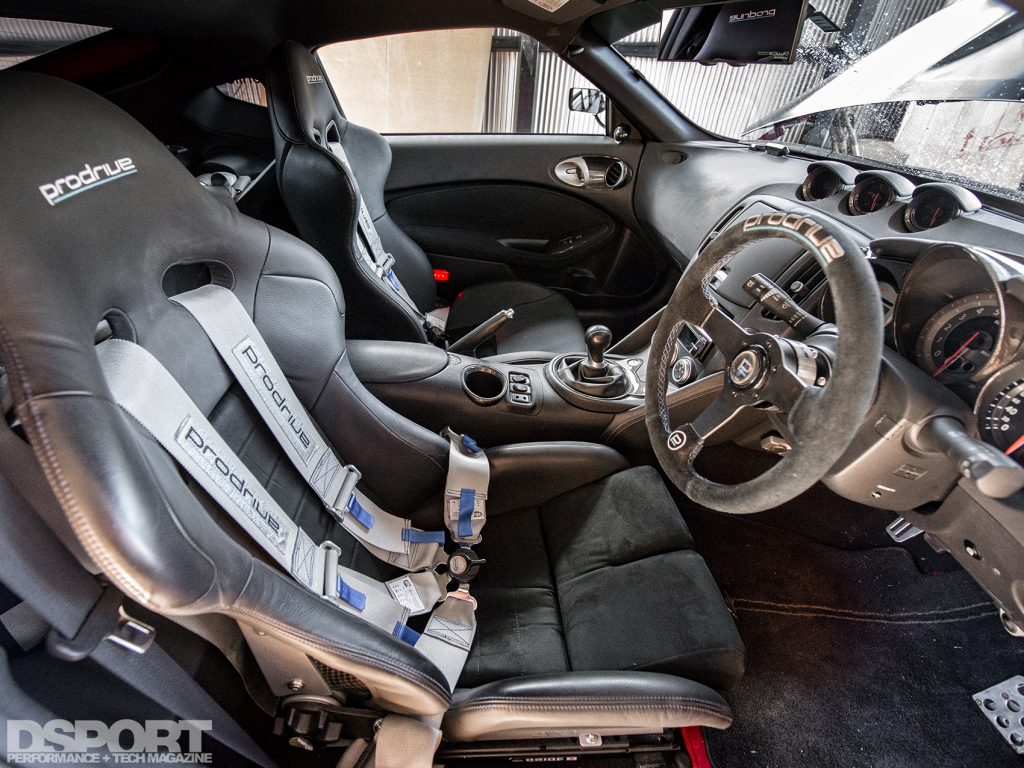 Varis already had a company demo car in the stable flaunting its existing aero kit. However, for the Kamikaze-Z, Varis decided to build upon one of its customer’s cars instead. According to Varis’ overseas liason and sale person, Tadashige Chiba, the Z34 test vehicle belonged to a loyal customer of four years. This customer often stated, “Someday, my Fairlady Z will be a Varis Demo Car!” When Varis offered to work with the customer on the new design, his decision was quick and predictable. 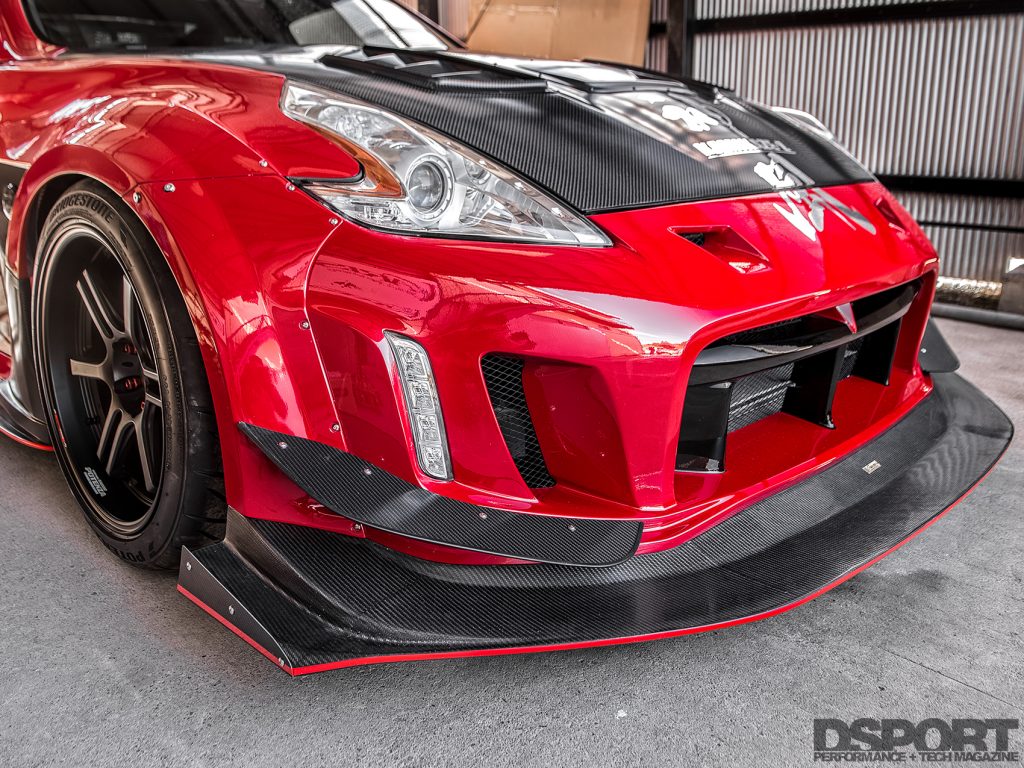 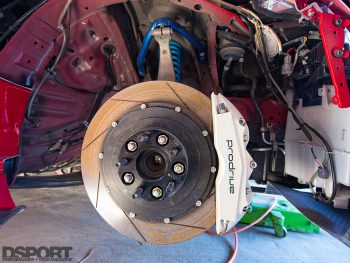 It came as no surprise that Varis employed a simple set of criteria for the next in the Kamikaze lineup. The aero kit would need to exude a sense of speed and aggression while retaining a “cool and sporty appearance.” Varis designed the Kamikaze-Z with similar elements proven successful on the Kamikaze-R. The Z34 build started with Varis’ new Arising II wide-body kit. To further distinguish the Kamikaze-Z, generous use of carbon fiber at the front and rear make up the splitter, canards, rear diffuser and wing. These components work together to help direct airflow and generate downforce. Vented, wide fenders help to relieve pressure built up in the wheel wells by the 19×11-inch wide Potenza RW006 wheels mounted with 285/35R19 Bridgestone Potenza RE-71R rubber at each corner. Behind the spokes of the RW006 wheels, one can see the Prodrive big brake kits composed of larger calipers and two-piece rotors at each corner. Prodrive’s Sport Suspension System drops the chassis over the square wheel and tire combination to give the Z an aggressive stance to go with its equally menacing appearance. 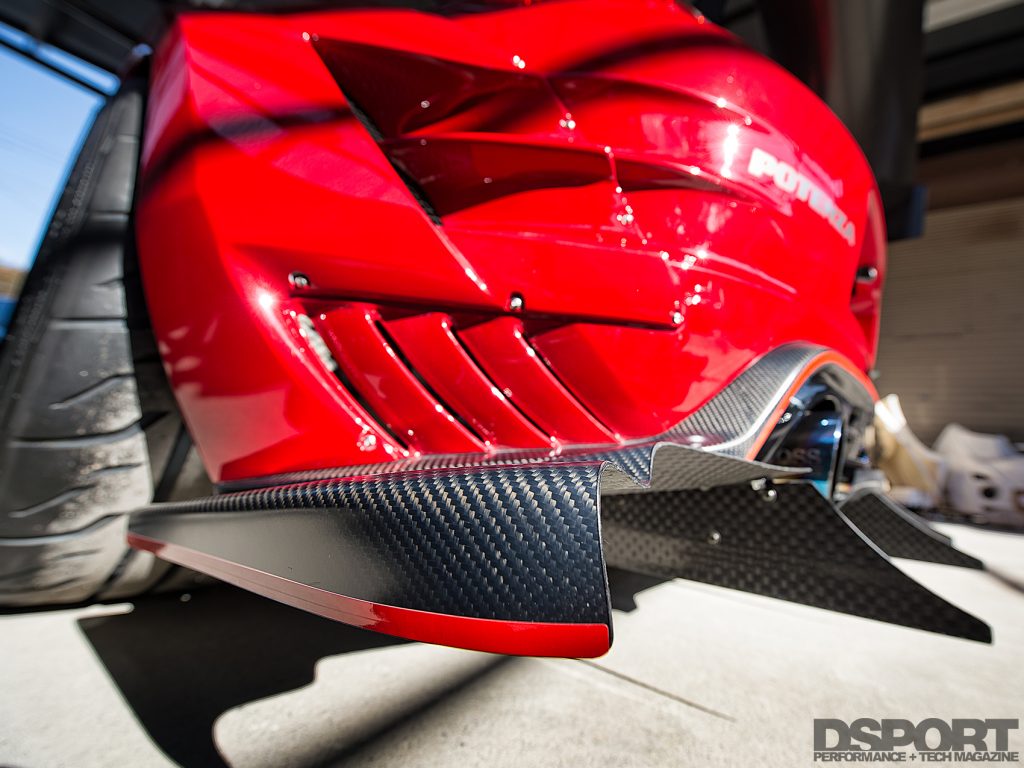 Increased downforce, improved handling and better traction work together to enhance the Z34 chassis. However, with a factory curb weight of 3,300 lbs, additional horsepower would also be necessary for quicker lap times. Under the vented, Varis carbon-fiber hood resides the heart of the Fairlady, a VQ37VHR V6 engine with just over 300 horsepower to the wheels as measured on a Dynojet dynamometer. Although this is a respectable power level from the factory, few would say that more power is bad. When evaluating the methods of increasing the VQ37’s output, Varis elected to retain the naturally-aspirated induction system and enhance the engine’s horsepower and torque levels by way of higher compression and increased displacement. 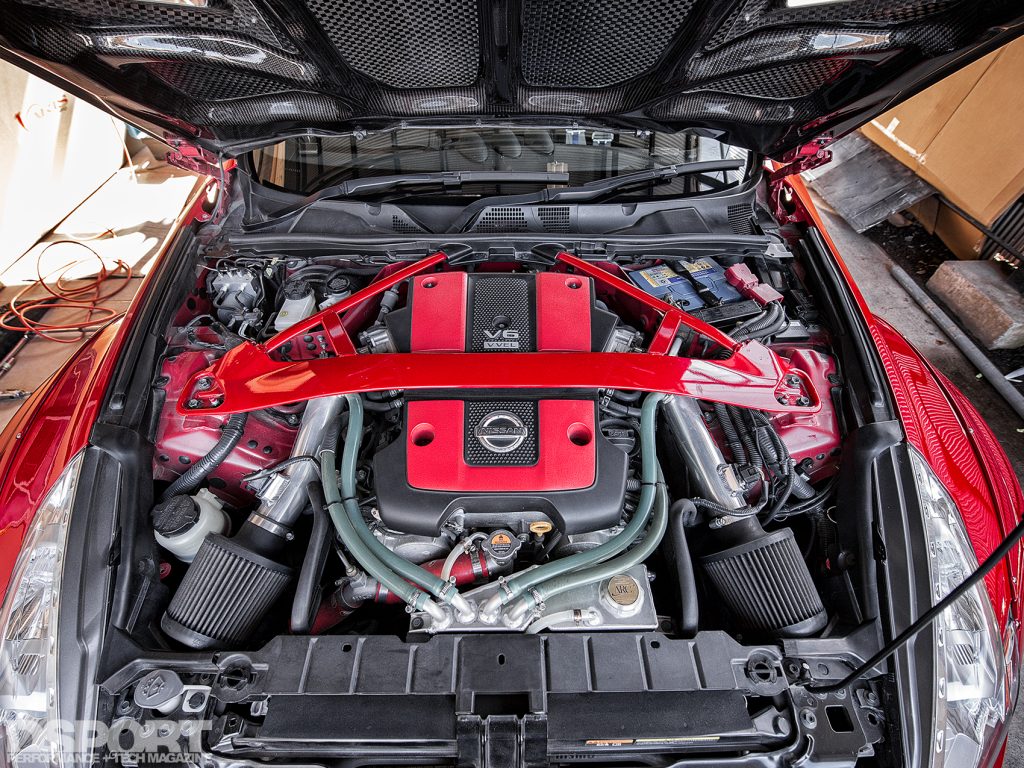 Varis sent the V6 block to NAPREC by Nagoya Precision to be disassembled and refreshed with a new rotating assembly. After applying a fresh hone to the cylinder walls, NAPREC slugged the block with higher 13.0:1 compression CP Pistons. BC Brian Crower connecting rods make the connection between the pistons and the 92mm BC Brian Crower stroker crankshaft. The new rotating assembly gives the engine a seven-percent displacement increase to a total of 3,955cc and a higher compression ratio over the factory 11.0:1 setup. NAPREC upgraded the factory bumpsticks with a set of TOMEI Powered 272-degree camshafts to help improved the engine’s volumetric efficiency.

(Left) STILLEN intake pipes with filters draw incoming ambient air from behind the headlights. (Right) An ARC air/oil separator with coolant over flow sits neatly in front of the engine

Optimizing airflow into the engine was the next focus of the build. A pair of STILLEN intakes filter the ambient air going into each of the factory throttle bodies. A er each combustion event, spent gasses leave the cylinders by way of Altrak long-tube headers feeding into an AP Boss exhaust system. The longer, equal-length runners of this type of exhaust manifold offer more horsepower and torque in the mid-to-high RPM ranges, where this engine expects to spend majority of its time as it runs laps around the track.

(L) A NISMO oil cooler sits in an opening behind the bumper. (R) An AP Boss exhaust directs exhaust gasses to the back of the chassis.

Once the hardware for the engine was in place, it was time to calibrate the engine management system that would be governing the now 4.0-liter engine’s combustion cycles. An AP Boss LAP engine management system replaced the factory ECU as the controller, regulating fuel delivery and the spark timing being sent to the TM Works ignition system. Once optimized, the engine produced 395.5 ps and 41kgm torque to the hubs of a Dynapack dynamometer. This equates to 390 horsepower and 297 lb-ft torque.

Varis finished the Kamikaze-Z in time to display its creation at the 2016 Tokyo Auto Salon at the Makuhari Messe. Shown alongside its big brother, the Kamikaze-R, the Z caught plenty of attention at the show. But this is only the start for Varis, who have a few more plans for the Kamikaze-Z before making a few trips to test at the track. The goal is to be dialed in before racing it at the HKS Premium Day scheduled in April. There, the Kamikaze-Z will challenge the clock on Fuji International Speedway’s racing surface. Will it move like a swift wind? Check back with DSPORT to find out. 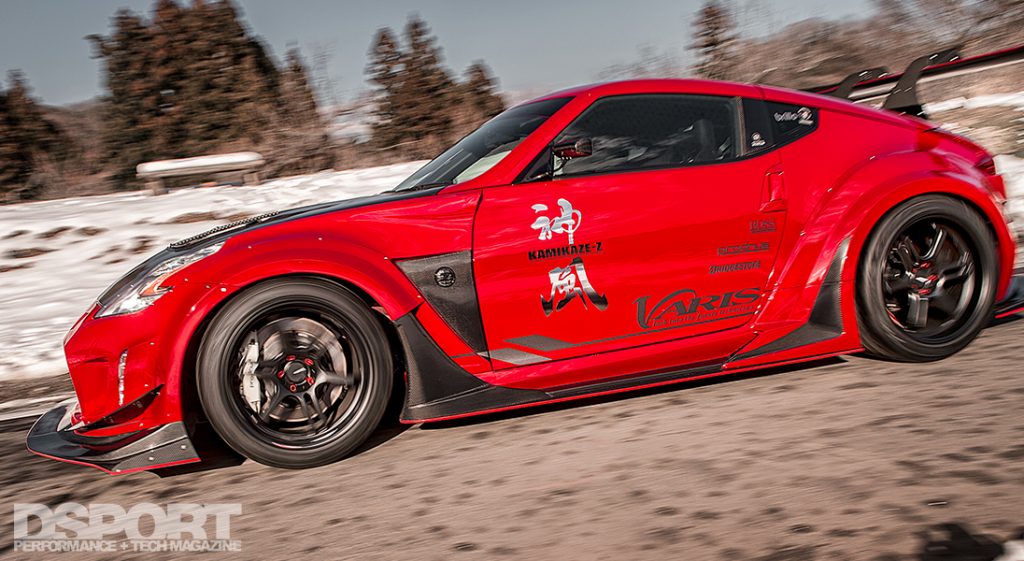