When it comes to Ohio, weather can be a fickle friend. Anyone watching the forecast leading up to the weekend of August 19-21, 2016, the long weekend of the 24th Annual Shootout presented by Buschur Racing, would agree that the outlook changed quickly and frequently. Fortunately, the early predictions that thunderstorms would saturate all three days of the event did not come true, as thousands began to pour into the Village of Wakeman and neighboring Sandusky, Norwalk and Milan. Text by Richard Fong // Photos by Richard Fong, MaryBeth Kiczenski and Jake Schipper 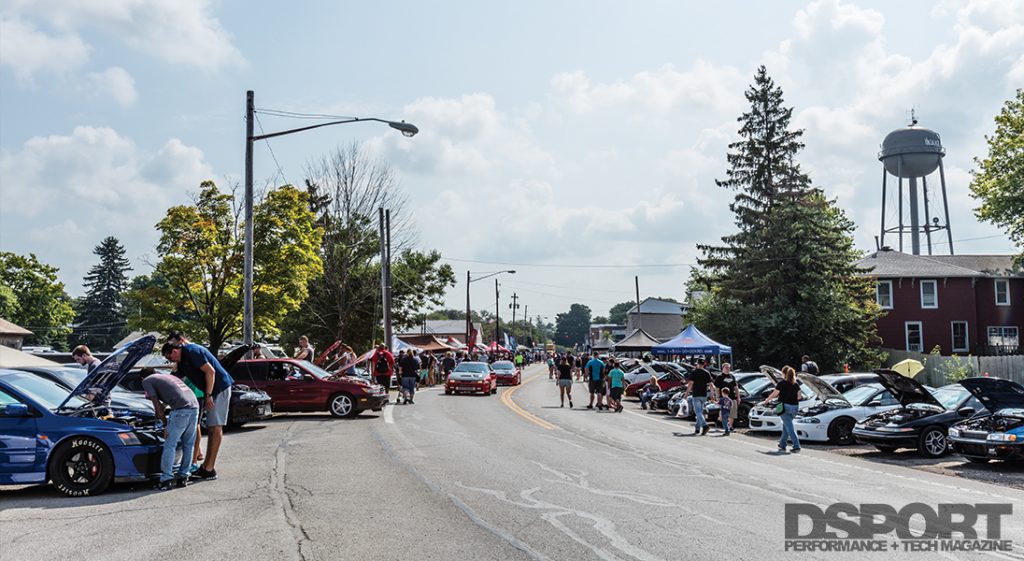 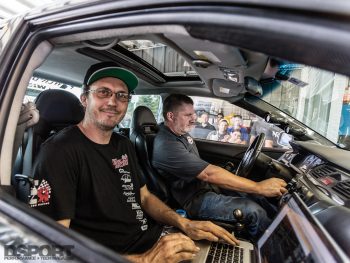 Wakeman, Ohio has a population of just over 1,000 residents. On the first day of the Shootout, that population more than tripled as the primary street through town (Main Street) was closed to traffic and served as the staging area for attendees of the Buschur Racing Open House. The day kicked off with warm, humid and clear skies, as more than a dozen vendors set up their booths along Main Street. Later in the morning, the first car was strapped down to Buschur Racing’s AWD Mustang dynamometer as the Dyno Challenge began. The early lead went to Atif Awan, whose white EVO VIII put down 850 horsepower to the rollers. It appeared that this number would certainly be the benchmark to beat. It held onto its position at the top until AG Motorsports brought its EVO up to the dyno. Its loud but unassuming green hue gave no indication of its abilities. Once strapped down to the dyno, it handily stole the show putting down an impressive 935 horsepower, winning the challenge by a clear margin over Awan. No one else came close that day. 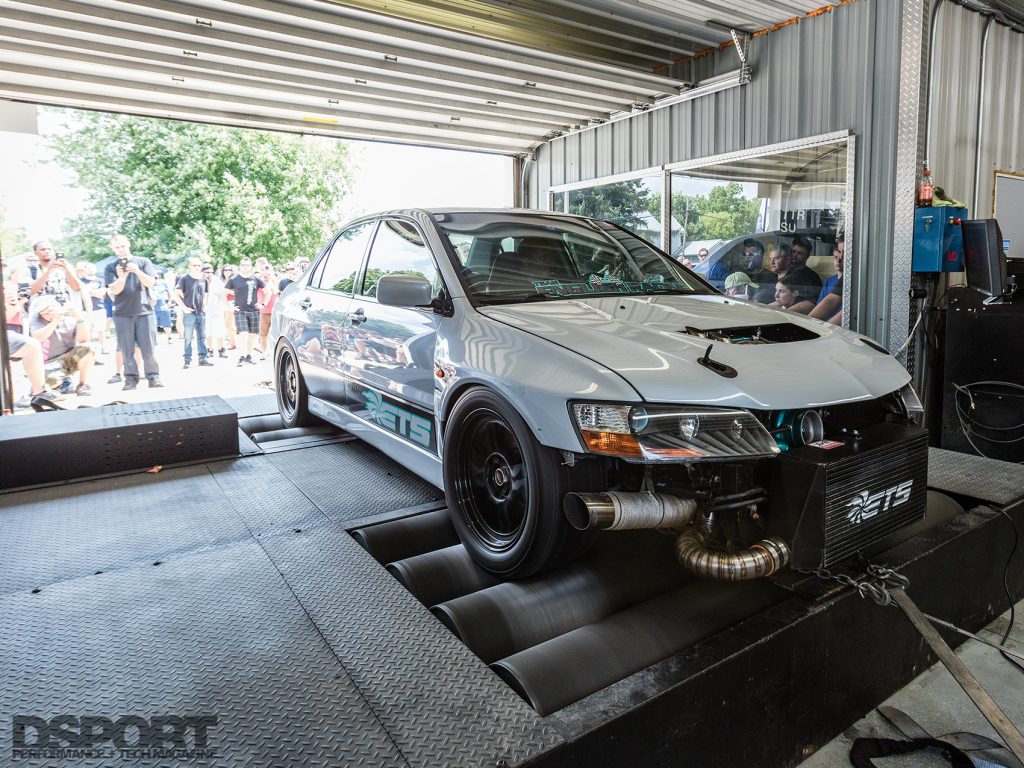 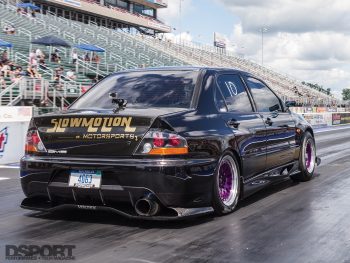 Later that afternoon, the masses began the migration from Wakeman to Summit Motorsports Park in Norwalk for the first round of qualifying for the weekend. The popularity of the Shootout has pushed competitors to make more powerful machines in the quest for quicker passes and victory. Unfortunately, a good number also discovered the next weak link in their racecar builds, as numerous breakdowns slowed the qualifying process on the first night. Boostin Performance’s Red Demon suffered a broken half shaft at the launch and narrowly escaped a potentially devastating crash. Fortunately, the skillful driving of Devin Schultz saved the world record holding 2G DSM from hitting the K-rail. 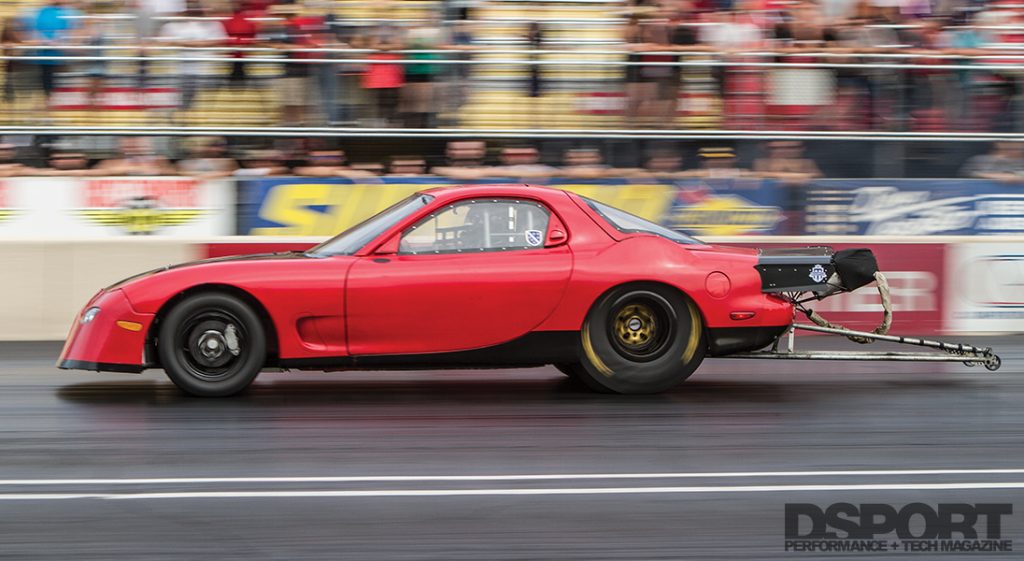 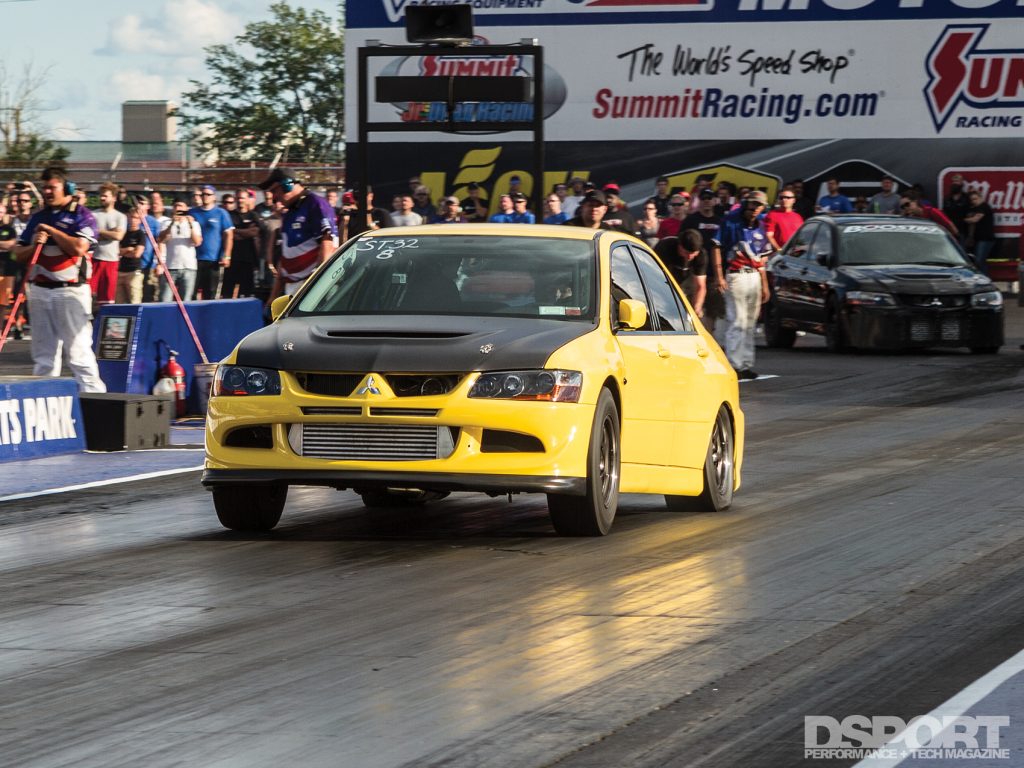 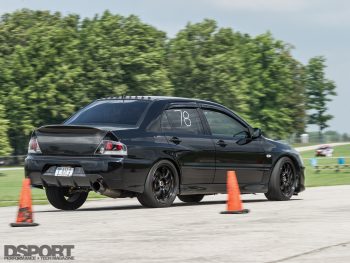 Since the main lot on the East side of the drag strip had quickly filled to capacity, the autocross and Max Effort events were conducted on the West side of the track. Unfortunately, these events were not without their fair share of breakages either, which delayed the move back to the drag strip for the quarter mile portion of the Max Effort competition. Once the track went hot, Max Effort drivers made consecutive passes down the drag strip to finish the competition. Afterwards, a test and tune session gave drivers the chance to practice. Unfortunately, this session would get cut short as the call for the second qualifying session was moved up from 7pm to 6pm in an attempt to beat a storm that was headed toward the track. Heavy rains arrived at 5:50pm, sending everyone scrambling for cover. Multiple attempts were made to dry off and restart the race, but a second and third storm system came through and kept the track from being dried. By 7:30pm, everyone agreed to shut down and kick off the second qualifying round on Sunday morning. 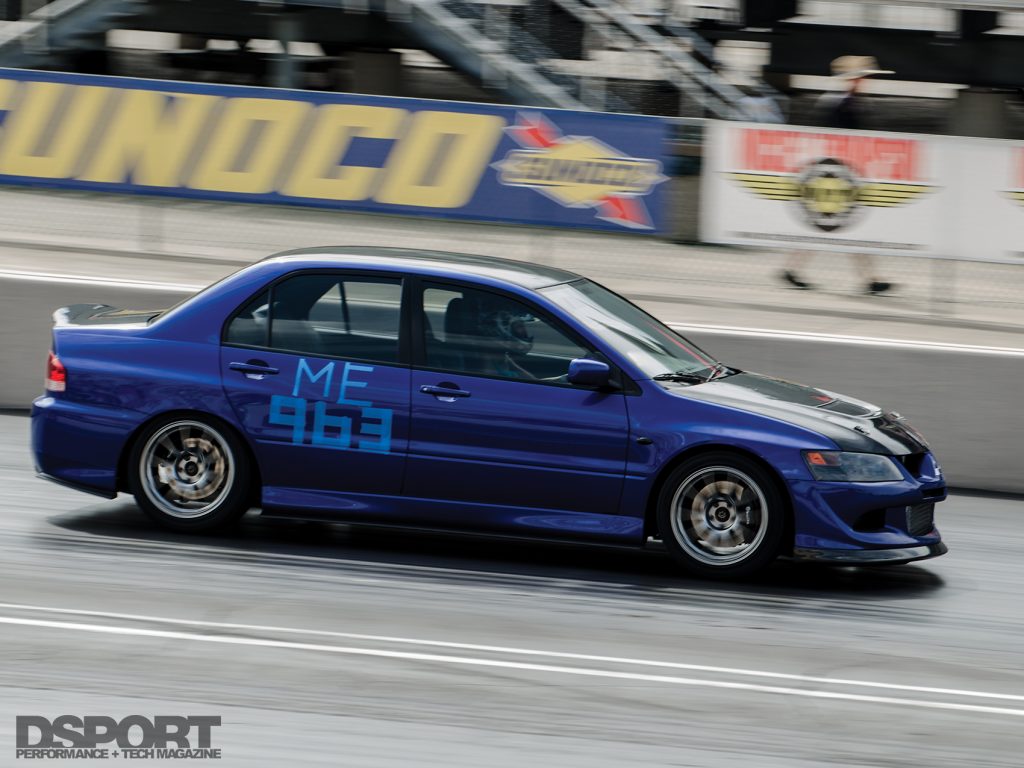 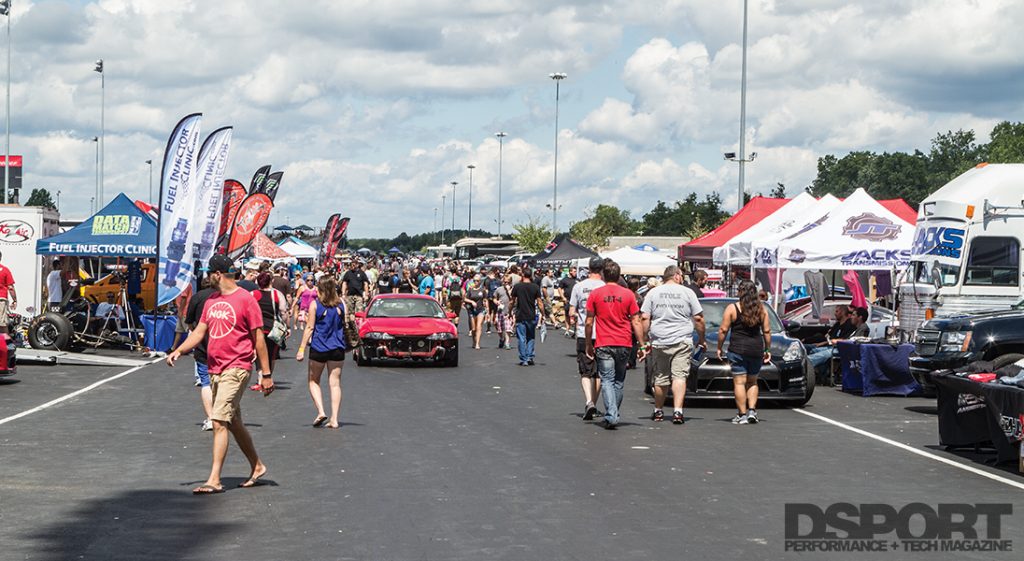 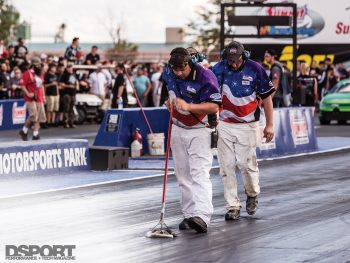 The forecast for Sunday could not be more ideal as it was slated to be dry and moderate in the mid 70s. The second qualifying round was set to start at 10am and racers were ready for the action. Once the round started, the breakdowns and perpetual delays ensued. There were terrible clean up delays due to debris, oil and water downs. The second qualifier barely finished by 2pm, prompting organizers to skip the third round of qualifying. Eliminations began at 3pm with a prayer followed by the American and Canadian national anthems. Soon after, the racers began the eliminations. Numerous oil downs compounded by broken drive lines and power trains plagued the eliminations, but that didn’t slow the quickest drivers and machines from making a huge impact on the drag strip. 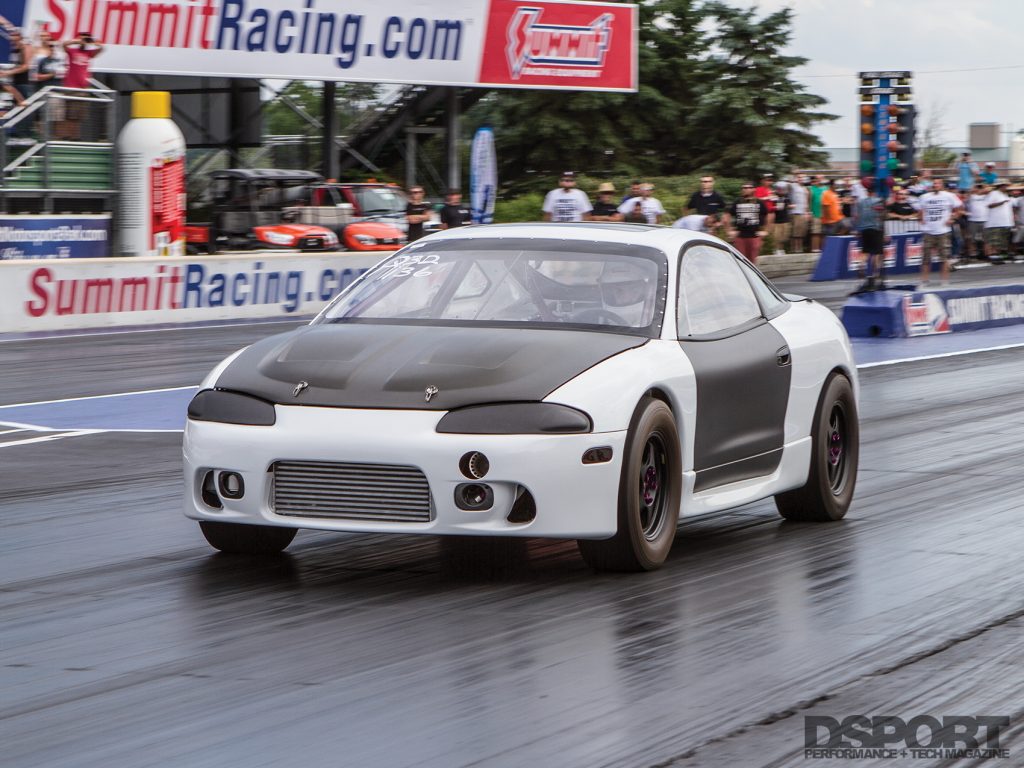 Quick GT-Rs have become a hallmark of the Buschur Shootout alongside the already numerous Mitsubishi DSM and EVO competitors that have attended and supported the event for 24 years. At the 21st Annual Shootout in 2013, David Buschur decided to add the GT-R to his stable of vehicles and to the Shootout. Attendance by some of the quickest machines built by Sean Ivey, Tym Switzer, John Shepherd and ETS soon built up the GT-R racing classes and captured the attention of more competitors than ever before. At this year’s event, 35 GT-Rs distributed across four classes gathered to compete, with three of the world’s quickest and fastest GT-Rs among them. Lucas English returned once again behind the wheel of the ETS GT-R, while AMS Performance brought down Gidi Chamdi’s new Alpha G GT-R from Chicago. Tony Palo and the T1 Race Development crew brought their GT-R to compete as well. Top Speed out of Georgia was also in attendance, bringing out a 6-pack of R35s to compete. Straight Jacket Motorsports made its first appearance at the event and also put forth a solid showing in the competition. 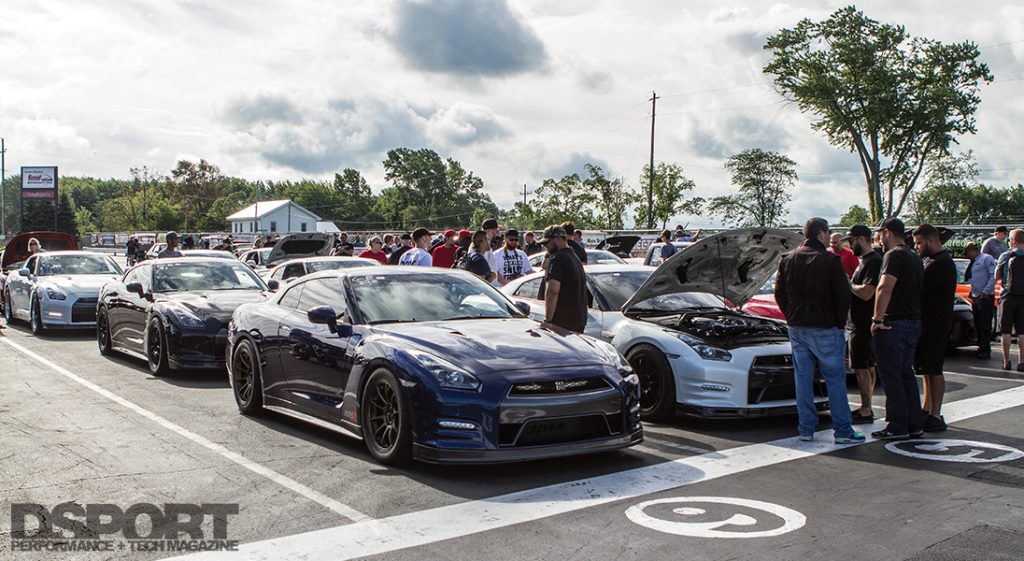 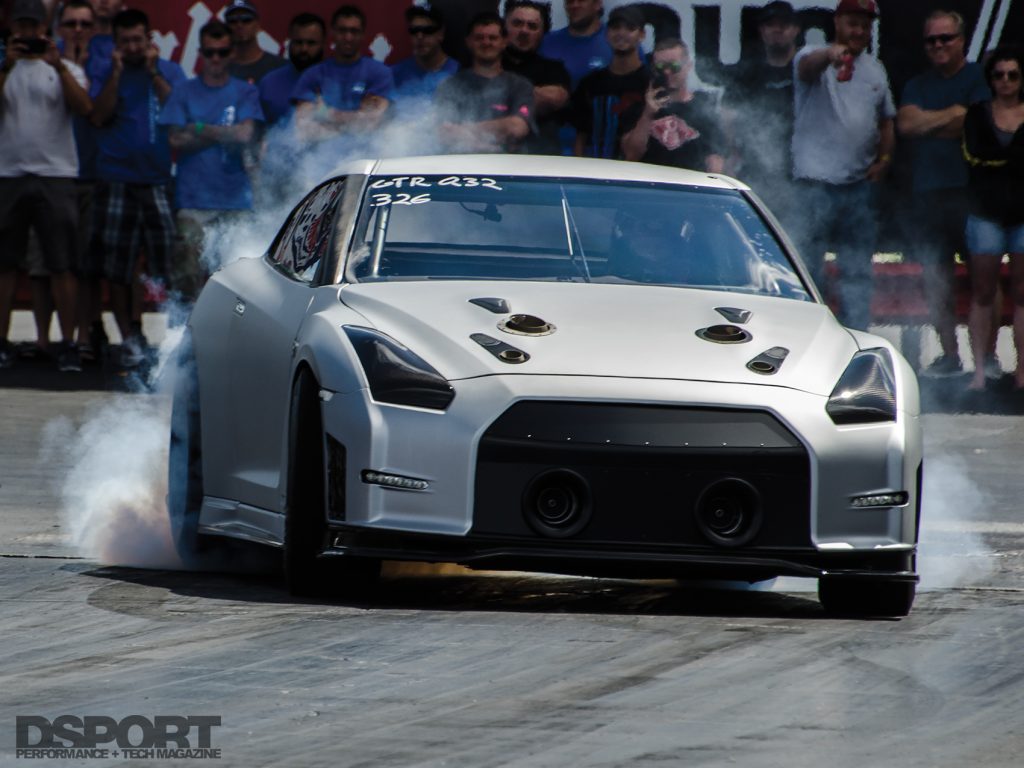 Fluid downs and broken drivelines continued to plague the competition as eliminations seemed to drag on. Nonetheless, the racers made waiting worthwhile. ETS had been very busy this summer, moving the turbochargers of its record-setting GT-R to the front, like many of the world’s top R35s. During the second qualifying session, ETS came close to its USA record pass with a 7.354 second e.t. at 202.21 MPH. Then, during the GT-R Quick 32 eliminations, English and ETS set the world record as the fastest GT-R with a 7.518-second elapsed time at a blistering 207.62 MPH. However, English and ETS were unable to improve on their elapsed time as the title for world’s quickest GT-R remained with Ekanoo Racing of Bahrain. 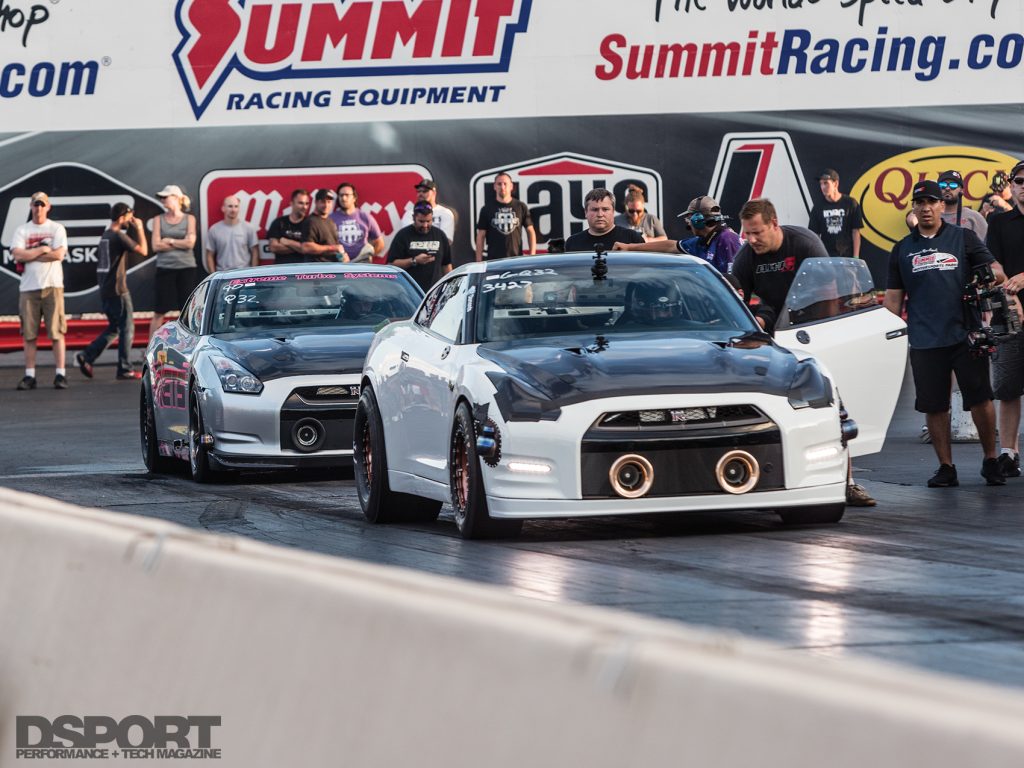 At the 2015 Shootout, Chamdi survived a terrible crash in his blue GT-R. Undaunted, he had AMS build his white street GT-R into a world class contender known as the Alpha G. This machine soon became latest addition to the list of top GT-Rs in the world, climbing into the 6th spot in the Magnificent 7 list with a 7.547 second pass at 195 MPH in late May. After qualifying second in class behind ETS, Chamdi could hardly wait for the chance to race the quickest and fastest GT-R in America. In the second round of eliminations, Chamdi ran a scorching pass of 7.363 at 200.26 MPH, establishing a new personal best and rising to 4th in the standings of the world’s top GT-Rs. Chamdi got a bye in the next round, advancing into the Finals against English and the ETS GT-R. As the night dragged on, everyone waited anxiously for the battle between the two quickest GT-Rs in America. As misfortune would have it, the ETS GT-R suffered a breakdown and could not be repaired in time to meet Chamdi in the finals. Chamdi hated winning by default and decided to race the clock for a record that night. Unfortunately, gremlins hindered his attempt as he could not get a clean pass. 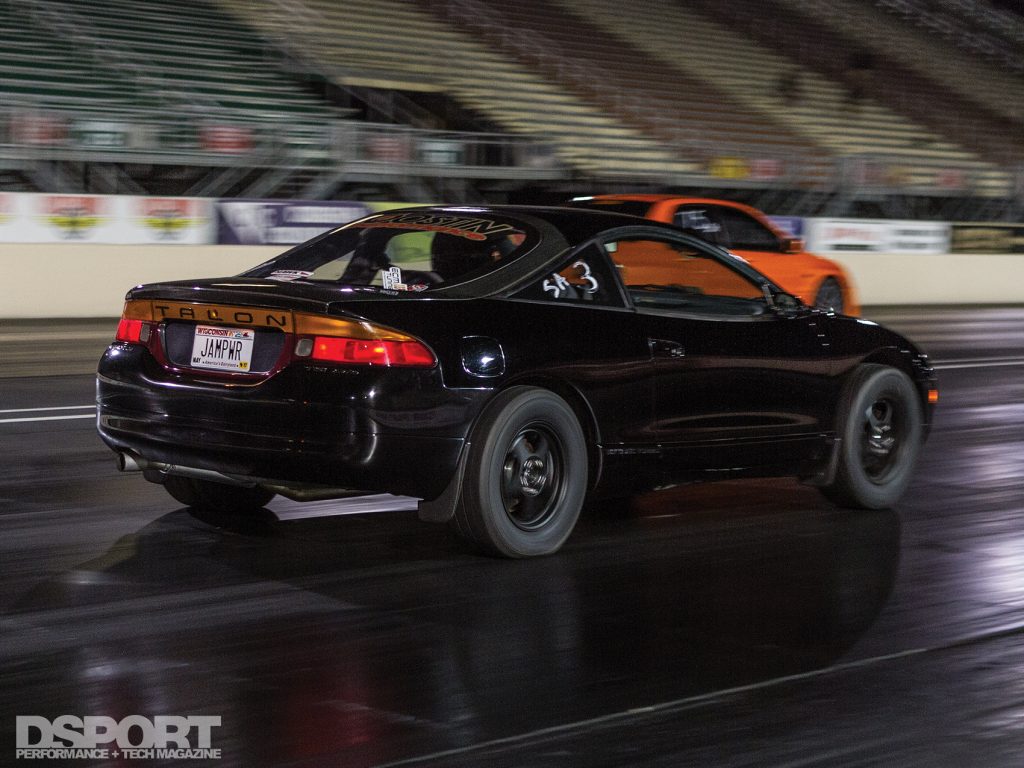 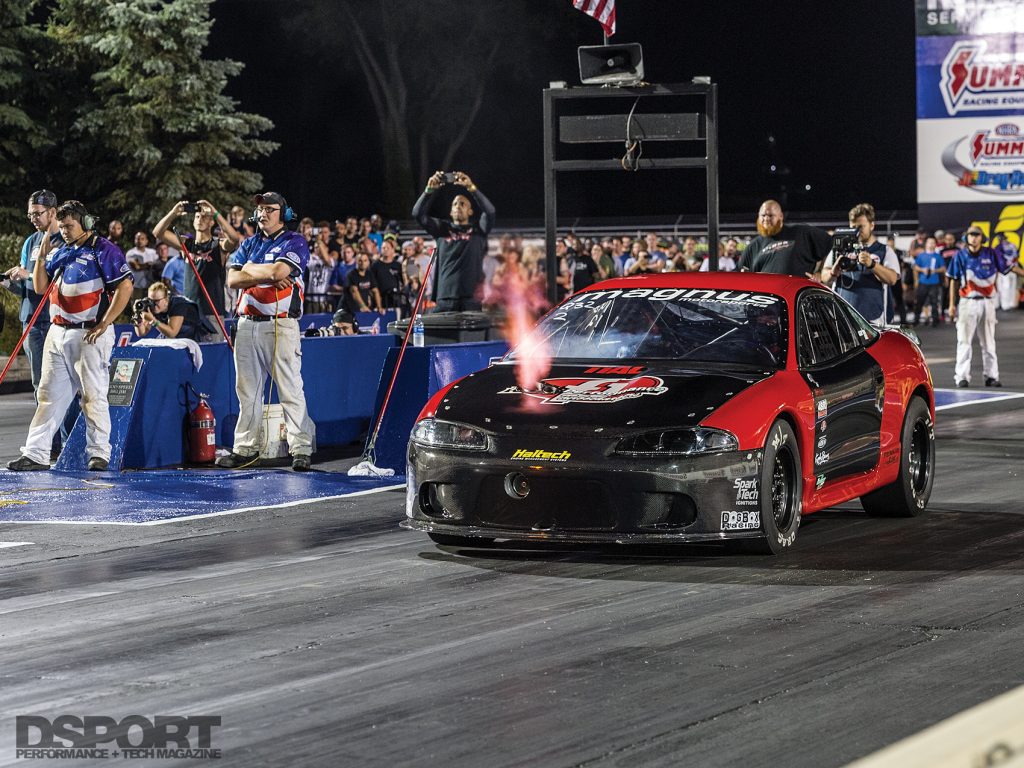 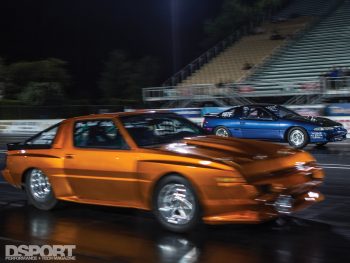 At just after midnight, the 24th Annual Shootout presented by Buschur Racing officially ended. Despite the uncooperative weather and numerous breakdowns, this Shootout set its own records that weekend. Despite being the longest running and latest ending Shootout in history, this event also set a record gate attendance with 9,148 total attendees over the course of the weekend. The racer count of 428 was also an event record, indicating that the Shootout is still growing with each passing year. We’re looking forward to the next event as the 25th Shootout should be an especially memorable one next August. Stay tuned. 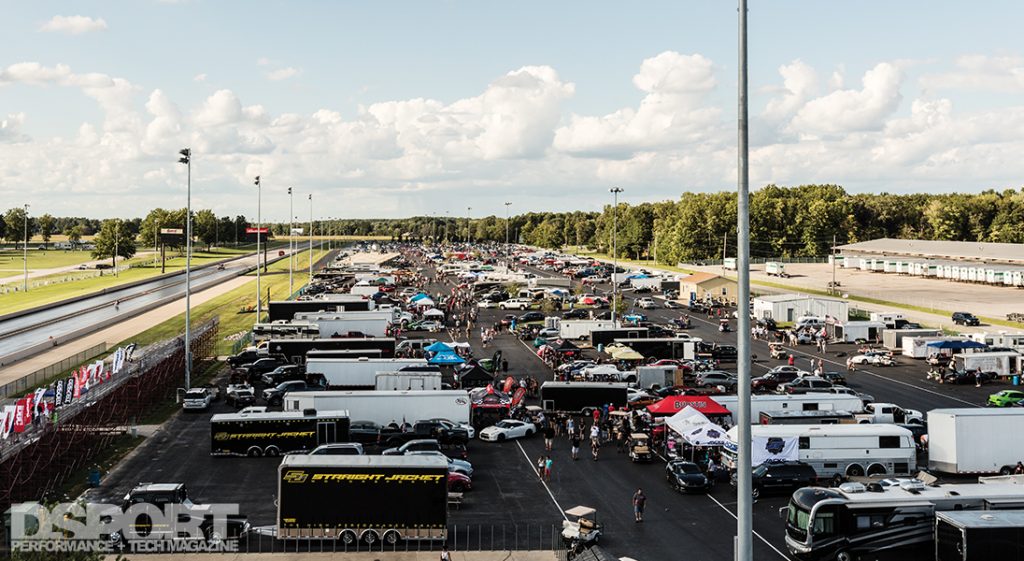