We’ve all seen videos of race leaders stumbling over the last drops of fuel in their tanks, their engines sputtering and misfiring as fuel flow sporadically cuts out. Sometimes they are lucky enough to coast past the checkered flag in first place, other times the competition catches up and blows past them at full tilt, watching their victory get snatched away at the last possible second. Text by Stanley Yee // Photos by Joe Singleton and Courtesy of Holley In racing, fractions of a second in lap times can make the difference between winning and losing. Teams don’t waste any weight carrying extra fuel, as doing so can compromise speed, and spending extra time in the pits can be even more costly. In trying to stretch a single tank as far as it will go, many teams run a fuel cell as close to empty as possible. With the heavy g-loads of racetrack duty, standard fuel pickups sometimes struggle to keep normal fuel pressure due to starvation at the hand of fuel slosh, leading to engine hiccups at the least opportune times. Holley’s HydraMat fuel reservoir was designed to combat fuel starvation without the need for expensive or complicated fuel tank modifications. 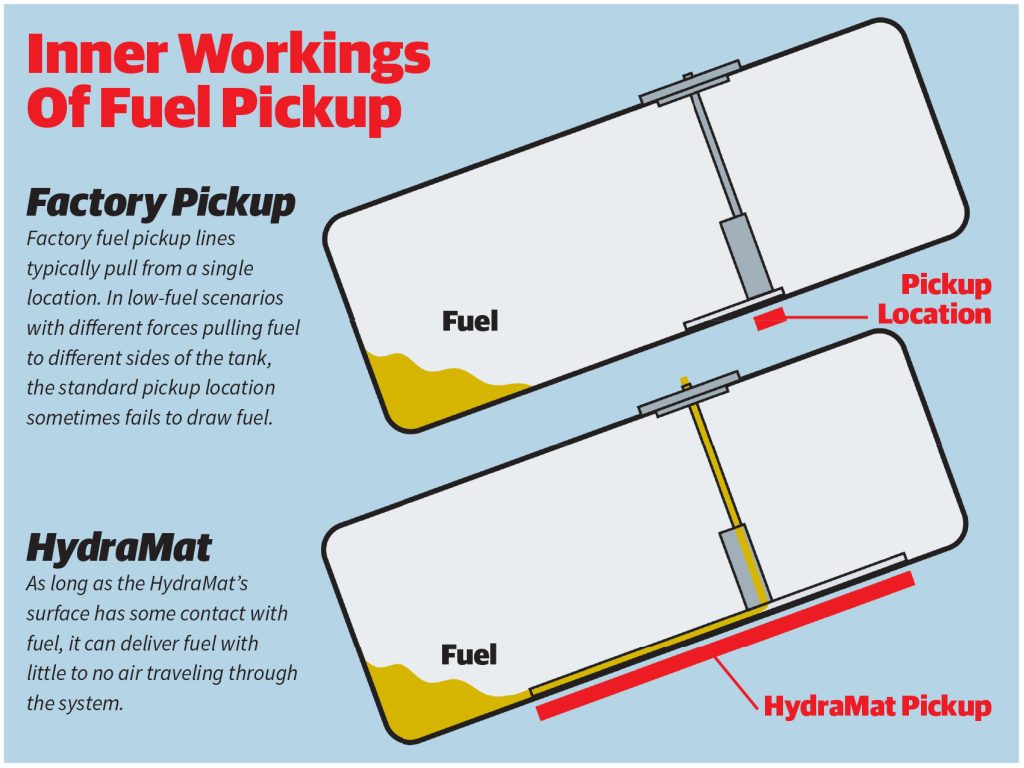 Holley’s HydraMat was specifically designed to mitigate fuel starvation until the entire fuel tank is emptied. Its fuel reservoir system can draw fuel from almost any section of the mat itself, effectively expanding the fuel pickup point to be the entire surface area of the HydraMat. This delivers stable fuel flow through the system, especially when running low amounts of fuel.

The downward force of gravity is a constant we’ve learned to understand in great detail, but fueling challenges arrive when introducing lateral g-forces and axial rotation into the equation. In a dynamic environment like inside a racecar, fluids can slosh around during hard cornering, acceleration or braking. This can pull fuel away from the pickup point, especially when running close to empty. Without fuel to draw, the fuel pump will pull air into the system. Inconsistent fuel delivery can disrupt the combustion cycle causing engine performance to drop, sometimes even stalling altogether. Traditional solutions to solve fuel delivery issues include fuel surge tanks, modified pickup pump reservoirs and interior tank baffling, but these are often cost prohibitive for all but the most serious race setups. HydraMat, on the other hand, offers a simple drop-in solution to minimize starvation issues in both fuel cells and factory fuel tanks.

HydraMat can be used in factory fuel tanks, or in racing fuel cells with foam inserts. Mats vary in shape and size to best match the fuel tank being used.

It might look like an oversized Band-Aid, but the HydraMat is a simple solution to a potentially race compromising issue. Unlike a standard fuel pickup which typically pumps fuel from a single centralized location, the HydraMat has an expanded footprint from which to draw fuel. By taking advantage of fluid behaviors, it can pull fuel from virtually any area of its surface. In essence, if any part of the HydraMat is in contact with fuel, it should provide uninterrupted flow. As fuel enters through small holes in the mat’s surface, it travels toward the pickup location. If fuel passes over an uncovered pore on its way to the pickup, the liquid surface tension effectively seals it closed, allowing the mat to continue to draw fuel from submerged areas. The pores act as a 15-micron filter, eliminating the need for a pre-pump fuel filter. Furthermore, fuel inside the media of the mat acts as a reservoir, minimizing the amount of air traveling through the fuel lines and allowing nearly all of the fuel in the tank to be used. In fact, the HydraMat works more effectively in fuel systems with return lines, as the fuel return can be positioned to help saturate the mat and keep the reservoir filled. 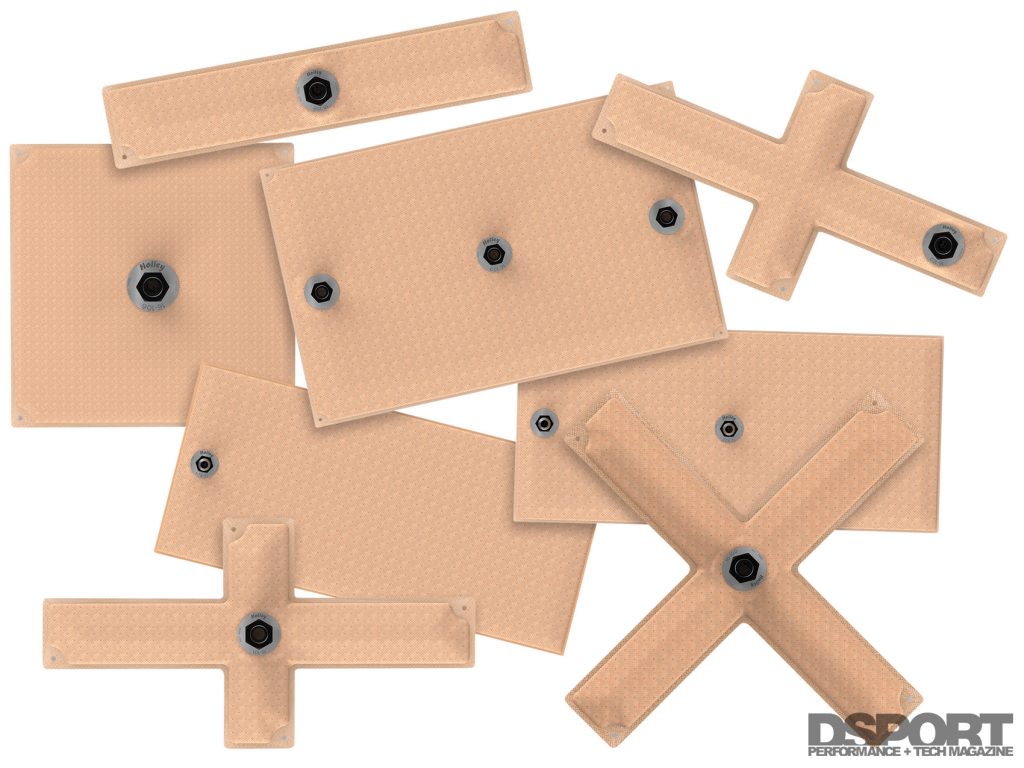 Variations of the HydraMat include different locations or multiple fuel pickup points, some of which are designed specifically for certain style fuel tanks or cells.

HydraMat is available in different shapes and styles to suit different tanks. Shapes include variations of rectangular, cross and square sizes, with selection dependent on vehicle needs. Each has been designed to fit into small cover plates or sending unit access holes without suffering any damage from being folded. Among the various shapes and sizes, Holley offers different locations for pickup fittings, particularly important for circle track racers who spend prolonged periods of time on high banking turns. Some of Holley’s larger mats include centralized pickup fittings plus additional fittings on either side in order to pull fuel from multiple pickups. Since the mat sits flat on the bottom of the tank, foam inserts for fuel cells can still be used. Holley designed the HydraMat to conform to the variables of racing, adding compatibility and accessories to minimize complications. To secure the HydraMat while inside the fuel tank, the mats feature specially designed corner mounting tabs. Depending on the type of fuel tank, magnetic or adhesive attachment nodes hold the tabs firmly in place. Most styles of HydraMat use -AN or NPT threaded pickup fittings. Numerous adapters are also available for different fuel line applications. The HydraMat material is compatible with pump gas, alcohol, ethanol, methanol, E85 fuel and with 2-cycle oil blends up to 20:1. Depending on fuel quality, driving frequency and environment, the recommended service life of each unit is 5-10 years. Holley recommends regular inspections for racecars using the product under more strenuous conditions. 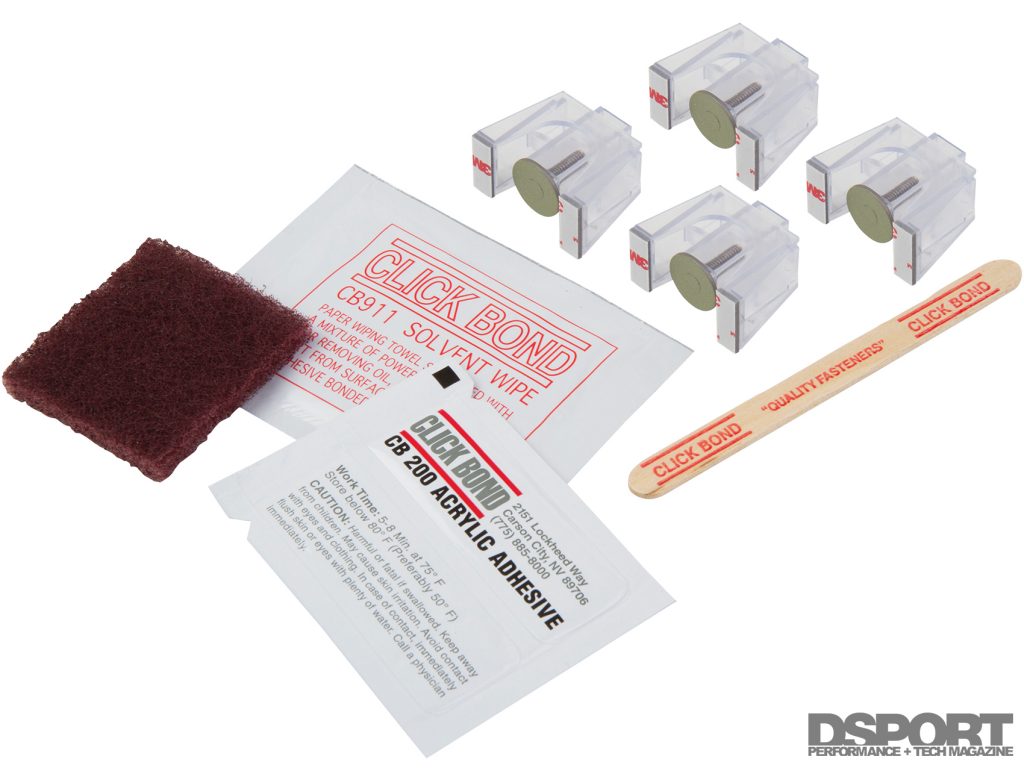 Holley and the ARCA racing series have built a partnership in which the HydraMat is used as a spec part. To demonstrate the functionality of the HydraMat, the ARCA series race director set up a test by running the mat in a 22-gallon fuel cell with only one gallon of fuel inside. After running the car on a 33 degree banking for five minutes, the team saw zero drop in fuel pressure. Testing continued by running several more laps before pulling into the pits, once again without any loss of fuel pressure. A 15×8-inch cross-shape HydraMat (P/N 16-102) will soon supply fuel to the D’Garage Fiesta ST. With its ability to pull heavy cornering loads, HydraMat can be the key to reliable fuel delivery on the racetrack. Once the mat is installed, should be able to maintain stable fuel pressure even with low fuel levels, saving weight and improving lap times.
On March 22, 2017