Racing runs in the blood, and for some families it runs deep and to the core. In the case of the late rally driver Roger Clark, it started when he passed his driving test at age 17 and joined the Leicester Car Club. Clark competed in a variety of platforms including Ford Escorts, Porsches, Mini Coopers and Triumphs, to name a few. He focused on rally, competing for over 20 years in his native England. He and his co-driver Jim Porter campaigned successfully in the 1970s, capturing three British Rally Championships and two wins in the UK’s biggest rally race, the RAC Rally. He was also Britain’s first competitor to win a World Rally Championship event in 1976. Before his passing in 1998, Clark shared his triumphs, competitive spirit and passion for racing with his sons Matt and Ollie. Forging their own path, the brothers have poured their passion into some of the fiercest Subarus on Earth. Text by Richard Fong // Photos by Chris Wallbank 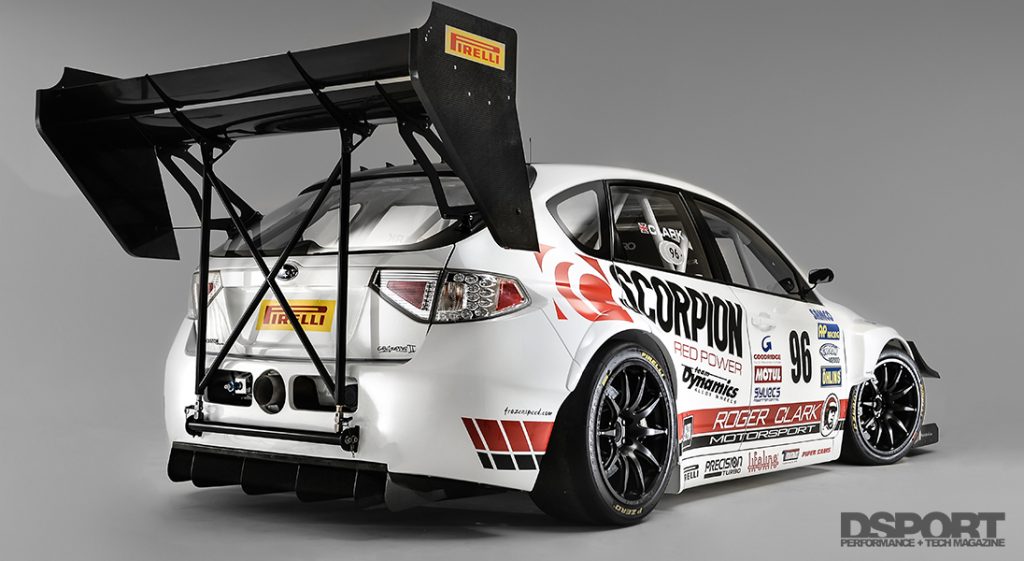 Carrying on a Tradition 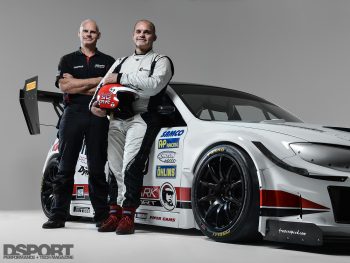 Clark Senior’s legacy lives strong in his sons, who carry on the tradition of competition and vehicle tuning services at the family business, Roger Clark Motorsport (RCM). While Matt handles the engineering side of the business, younger brother Ollie carries on the Clark racing tradition with his own exploits behind the wheel. Under the RCM banner, the Clark brothers have built and raced several extreme Subaru platforms. An early RCM time attack build, aptly named Gobstopper, was based on a 1999 GC8 Impreza STI chassis. Although the term gobstopper is synonymous with “jawbreaker”, it can also mean “a punch to the jaw.” To the competition, it’s an appropriate name given that this extreme coupe made 780 horsepower at the flywheel and won the overall “Ten of the Best” event at Elvington (in the Northern part of the UK) consecutively from 2007 through 2009, in addition to the Time Attack Pro Champions event in 2008 and 2009.

The Next Generation: Gobstopper II

The next year, the Clark brothers returned to the garage to start on a new project, aptly dubbed “Gobstopper II”. Based on a 2008 Subaru WRX STI WRC shell acquired from ProDrive, the Clarks put the GRB chassis through an even more comprehensive build program than they had with the GC8. The objective was to build a Pro Class Time Attack machine, which by UK standards implies that there are few, if any, restrictions holding the build back from being built on the cutting edge of automotive racing technology. 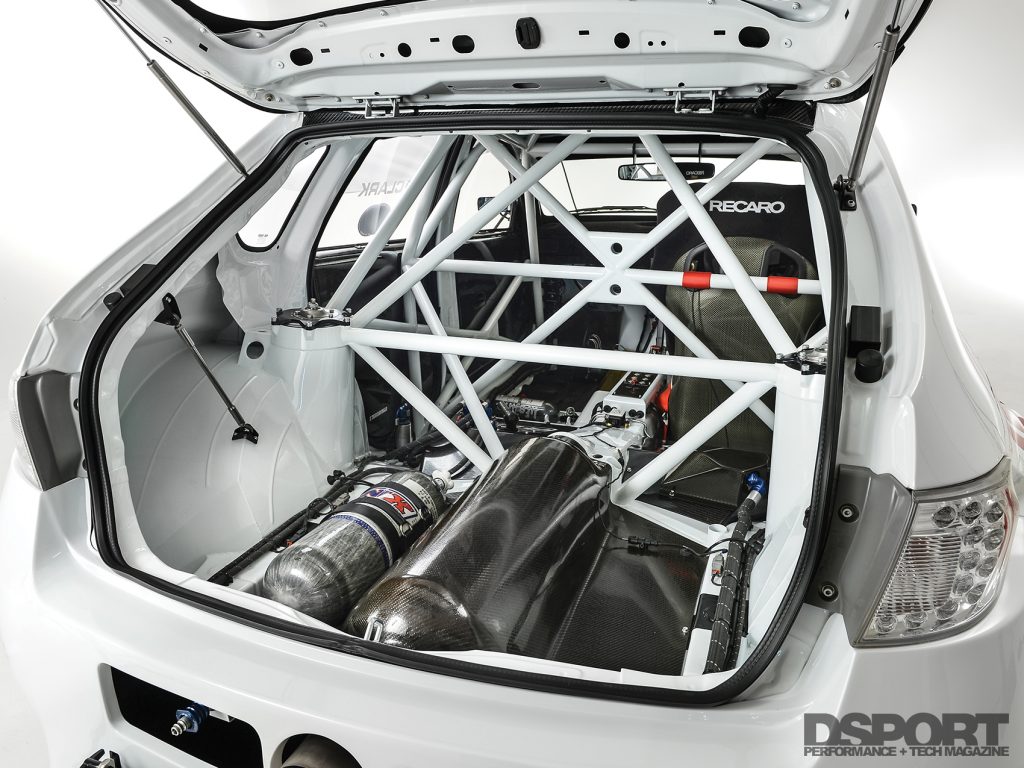 Once the GRB shell arrived at RCM, work started on the chassis. The craftsmen at Custom Fabrication fortified and stiffened the stripped shell with a custom cage composed of T45 tubing. The complex lattice design of the cage offers both increased rigidity for improved handling and a stout protective barrier for the driver in the case of an incident. During this time, the trunk lid, hood, roof, doors and bumpers were modeled in CAD and proven using CFD software. Afterwards, Formula 1 aero and body parts manufacturer, KS Composites, fashioned the components out of dry carbon-fiber. These pieces were affixed to the chassis and supplemented with a dry carbon-fiber wing, canards and a splitter. To be sure that all of the additional aero enhancements functioned as intended, the chassis was brought to the UK’s only full-scale aerodynamic wind tunnel, the Horiba Mira wind tunnel facility, where the aerodynamics could be validated. 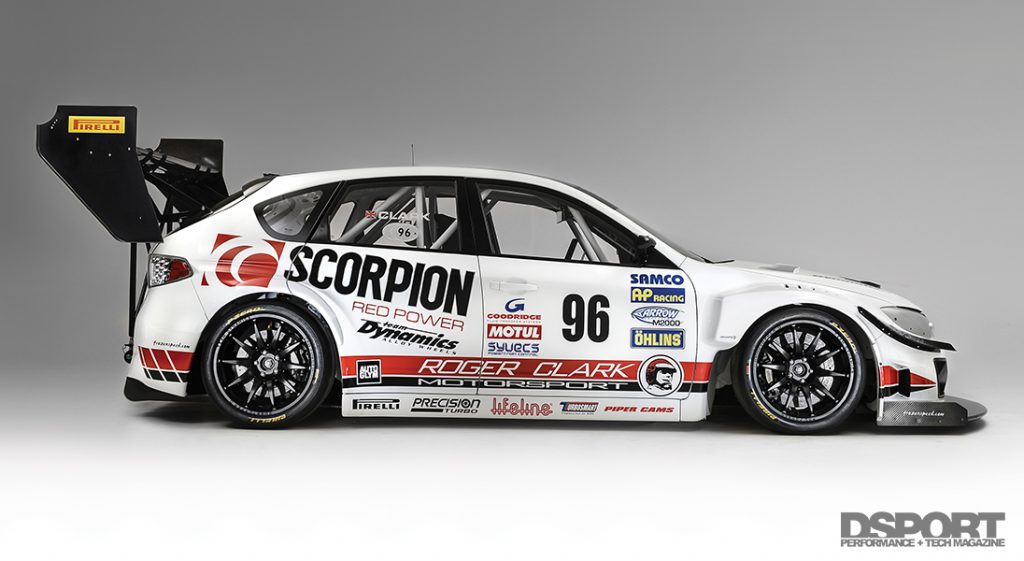 Employing wind tunnel tested aerodynamics ensures that the 18×11-inch Team Dynamics wheels mounted with Pirelli P-Zero racing slicks stay planted to the tarmac with maximum downforce and as little drag as possible. However, the suspension must also be optimized to push back against the downforce to ensure that adequate travel is maintained for proper handling. To this end, a set of Öhlins TTX46 adjustable dampers absorb the bumps and undulations on track while Eibach springs suspend the chassis and resist the downward pressure of the aero. To optimize for the lower ride height, RCM custom tubular subframes with adjustable pick up points help to correct for bump steer and improve suspension geometry. 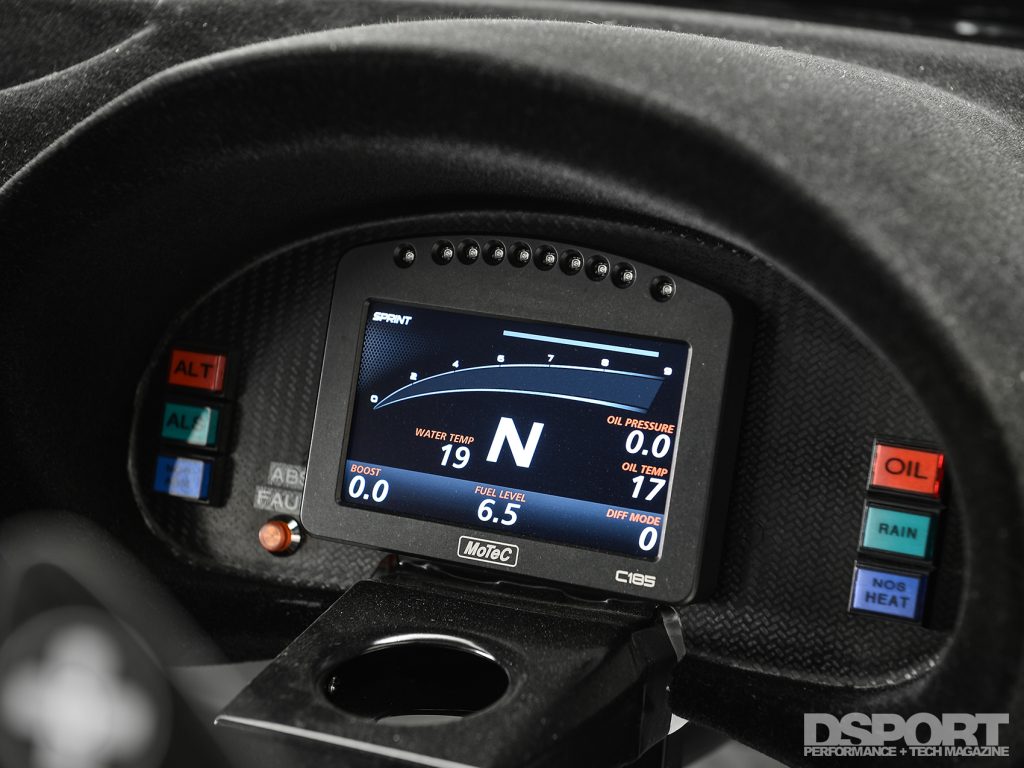 Once the Gobstopper II returned from the wind tunnel, RCM continued its preparation of the chassis. Built around Ollie’s stature and dimensions, a carbon-Kevlar Recaro Hans racing seat offers a comfortable position behind the Reverie carbon-fiber steering wheel. To relay engine vitals and other data to the driver, a MoTeC C185 display replaced the factory gauge cluster in the dash. The absence of a passenger and passenger seat exposed a vast space in which the build team could balance the chassis with functional ballast. On the floor of the passenger space, a Lifeline fire suppression tank and removable fire extinguisher take position alongside air lines for the air jack system. A secondary switch panel positioned on the tunnel supplement the primary controls mounted in place of the head unit on the dash. 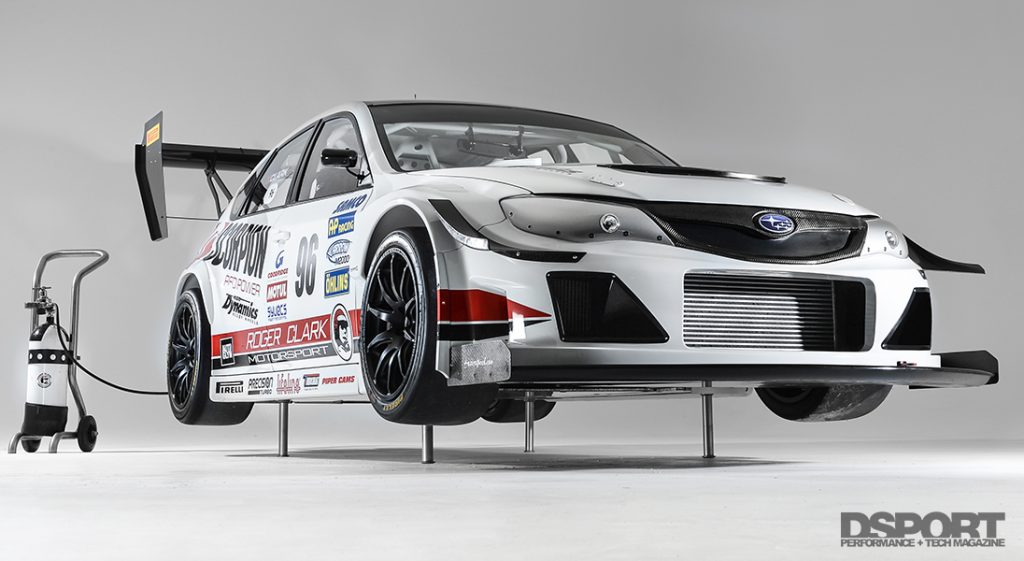 As work progressed on the chassis, Matt focused his attention on the EJ207 engine that would propel the GRB in competition. RCM prepared the block, applying a Mahle-developed Nikasil coating to the cylinder liners. RCM favored coating over the installation of iron sleeves since it retains the factory aluminum cylinders and their corresponding heat transfer properties. Once coated, RCM filled the cylinders with Omega 10.0:1 compression pistons. The 92mm slugs make the connection to the 75mm billet steel Arrow crankshaft by way of Arrow connecting rods, retaining the factory dimensions and 1,994.5cc displacement. At each end of the block, beryllium valve seats and bronze valve guides replaced their factory counterparts in the cylinder heads before RCM +1mm valves, bee hive springs and titanium retainers were installed. To lift the larger valves, a set of Piper camshafts replaced the stock bumpsticks in each head. 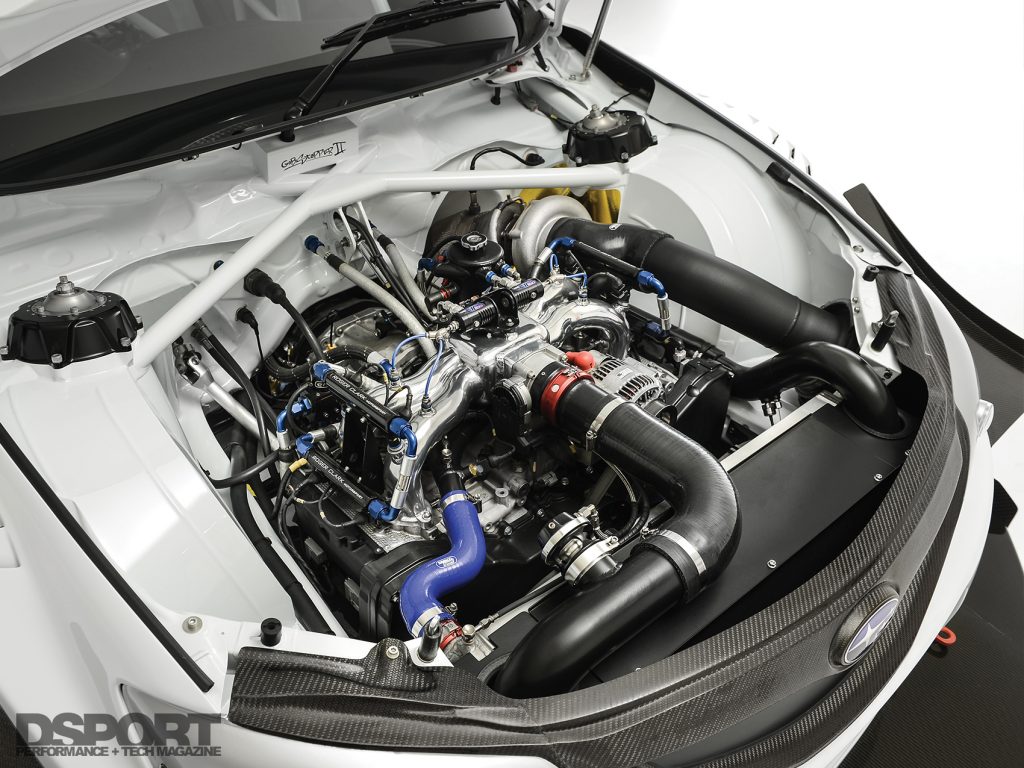 With the longblock assembled, RCM fabricated a manifold to position a PT&E PT6466 turbocharger in the engine bay. The turbo sends compressed air through custom piping to a BMR front-mount intercooler. Once the air charge exchanges heat with the atmosphere, it distributes to the intake ports by way of a Subaru WRC intake manifold. A quartet of ASNU 700cc/min injectors deliver VP Racing’s VP Import race fuel to the intake ports, while four additional ASNU injectors plumbed into the intake runners doubles the fuel delivery to the cylinders. At only 2.0-liters, it might be easy to dismiss this engine as modest in output. But don’t be fooled by its humble displacement, as Gobstopper I employed a similar setup and produced upward of 700 horsepower. Relying on a Syvecs S8 engine management system to meter the fuel delivery, control ignition timing and regulate boost pressure, the humble 2.0-liter boxer generated 880 horsepower and 670 lb-ft torque to the flywheel. Assuming a 15-percent driveline loss puts the Gobstopper II at 748 horsepower and 569 lb-ft torque at the wheels. 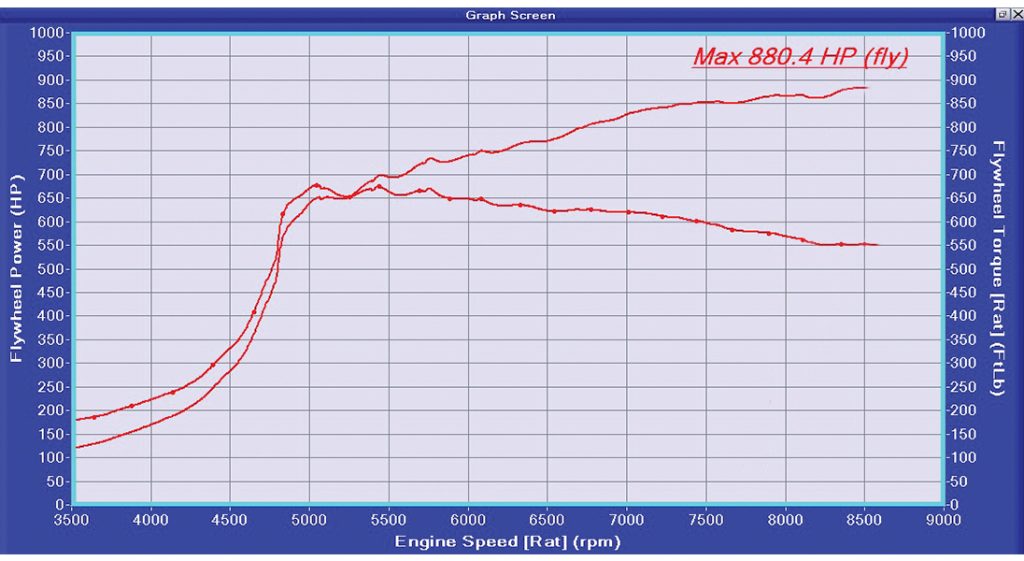 Nikasil is short for nickel silicon carbide. Silicon carbide is a very hard ceramic (that is much harder than steel) that can be dissolved in nickel. The nickel solution can then be electroplated onto an aluminum surface. It was developed by the Mahle Corporation and introduced in 1967. Although it was originally used on rotary engines to permit the apex seals to make contact with the aluminum rotor housings, it soon replaced chrome as a cylinder bore plating material in aluminum engines since it permitted tighter tolerances and dissipated heat more efficiently than an iron or alloy cylinder liner. Nikasil was used widely in race engines, especially Formula 1 and Champ Car.

On Top of the Hill 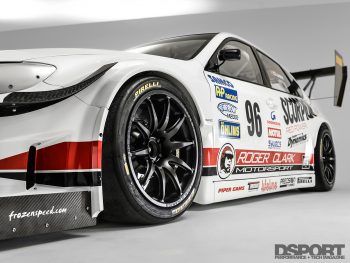 In 2014 at the completion of a rigorous three-year development process, Gobstopper II was ready to challenge the competition. With Ollie at the wheel, the RCM team campaigned in the Pro Extreme class of the UK Time Attack series. At the finals, the Gobstopper II came out on top by a 70-point margin. The next year, at the 2015 Goodwood Festival of Speed, Ollie Clark established a new record with a 0:44.91 elapsed time on the 1.16-mile hill climb, putting them in sixth place on the all-time leaderboard. For comparison, this was 3.31 seconds behind the time that Nick Heidfeld ran in 1999 in a V10 Formula 1 racecar. In 2016, despite the unrelenting wet weather conditions at Goodwood, Ollie’s best efforts to improve on his previous record were thwarted, yet he finished the day on top with a 0:46.23 elapsed time. This was enough to win a second consecutive victory at Goodwood. The Gobstoppers were intended to represent Roger Clark Motorsport at the track and demonstrate the capabilities of Matt and Ollie as well as carry on the family racing tradition. Given the successes that the Clark brothers have garnered in the past decade, it’s safe to say that they’ve done well by their father’s legacy. 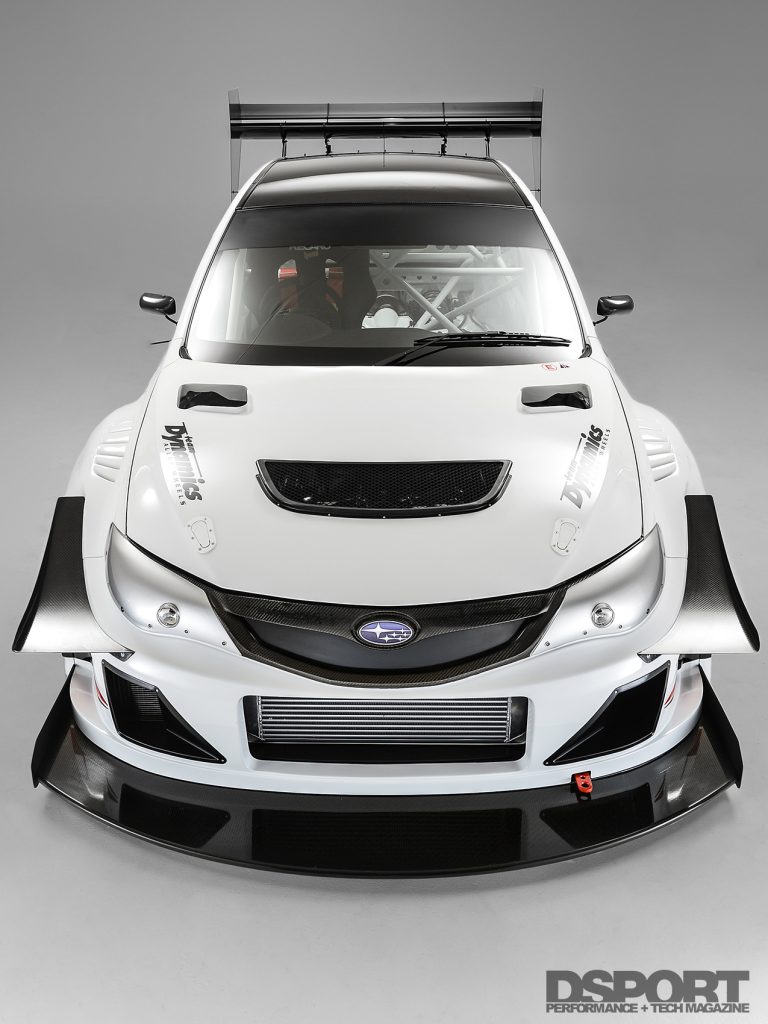