This Acidic Trio Is No Acid Trip 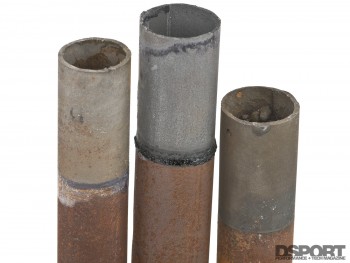 Using acid to remove anything and everything is an age old solution, but isn’t really ideal for the average consumer due to the specialized handling and disposal requirements. Nonetheless, acid-based products developed specifically with rust removal in mind offer just the results that certain consumers desire. Some products even leave a prepped surface ready for fabrication or paint. Unlike the specialty solutions, the old-fashioned over-the-counter acid, muriatic acid (used for balancing the pH of your swimming pool) can also do the job. However, in the hands of the inexperienced, this chemical is an accident waiting to happen. Potentially hazardous byproducts can almost always be expected when working with an acid, so be sure that your workspace is well ventilated and that proper safety precautions are taken when handling these chemicals.

Rust Removal and Paint Prep in One 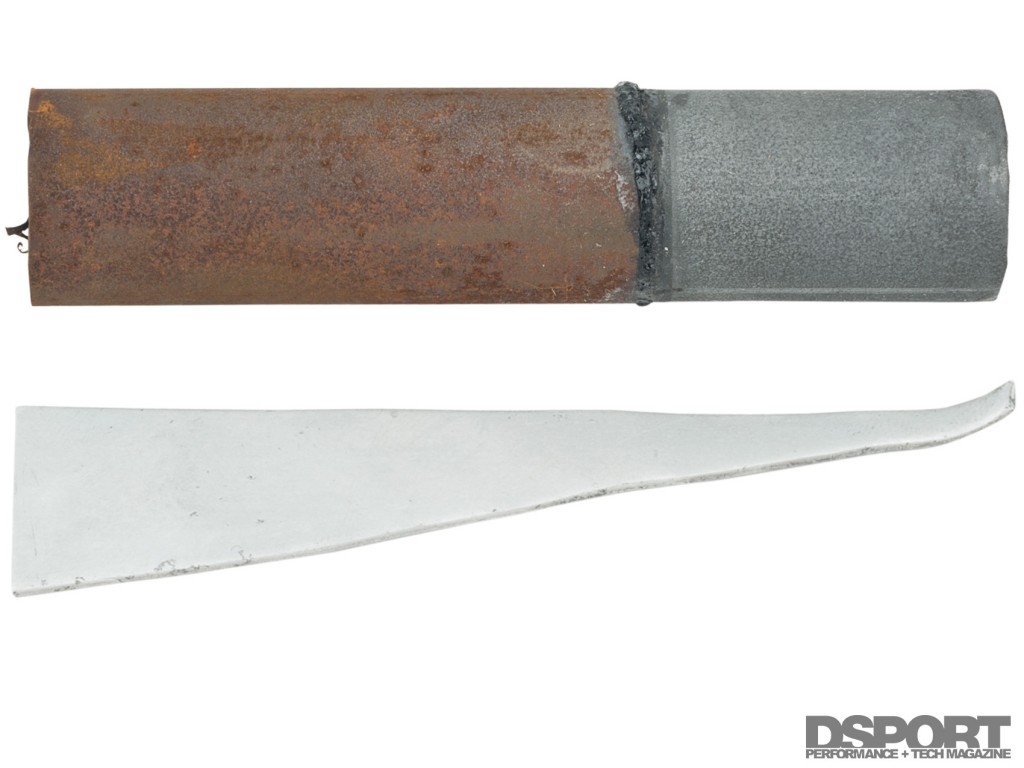 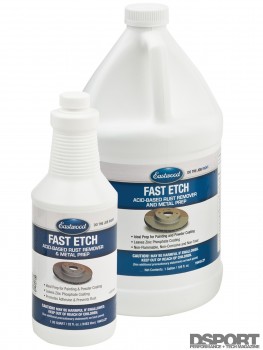 Eastwood’s Fast Etch acid-based rust remover and metal prep is a phosphoric acid-based chemical designed to not only remove surface rust but also leave behind a rust inhibiting zinc phosphate coating on the treated surface. As one might expect, Fast Etch worked pretty quickly once the sample had been placed in the Fast Etch bath. Within fifteen minutes, all of the oxidation was gone and the zinc phosphate coating began to form. After thirty minutes, over 80 percent of the submersed area was covered with zinc phosphate and in just over an hour, complete coverage had been achieved.  For the sake of experimentation, the sample was left in the Fast Etch container for an extended period of time (48 hours), forming a thick ring of zinc phosphate at the fluid line. This practice is not recommended by Eastwood, as they caution that extended exposure to Fast Etch could weaken the metal. Some of the hazardous byproducts that could result from using Fast Etch include hydrogen chloride, chlorine, hydrogen selenide and organoselenides. Once allowed to dry, the sample can be prepped, primered and painted. 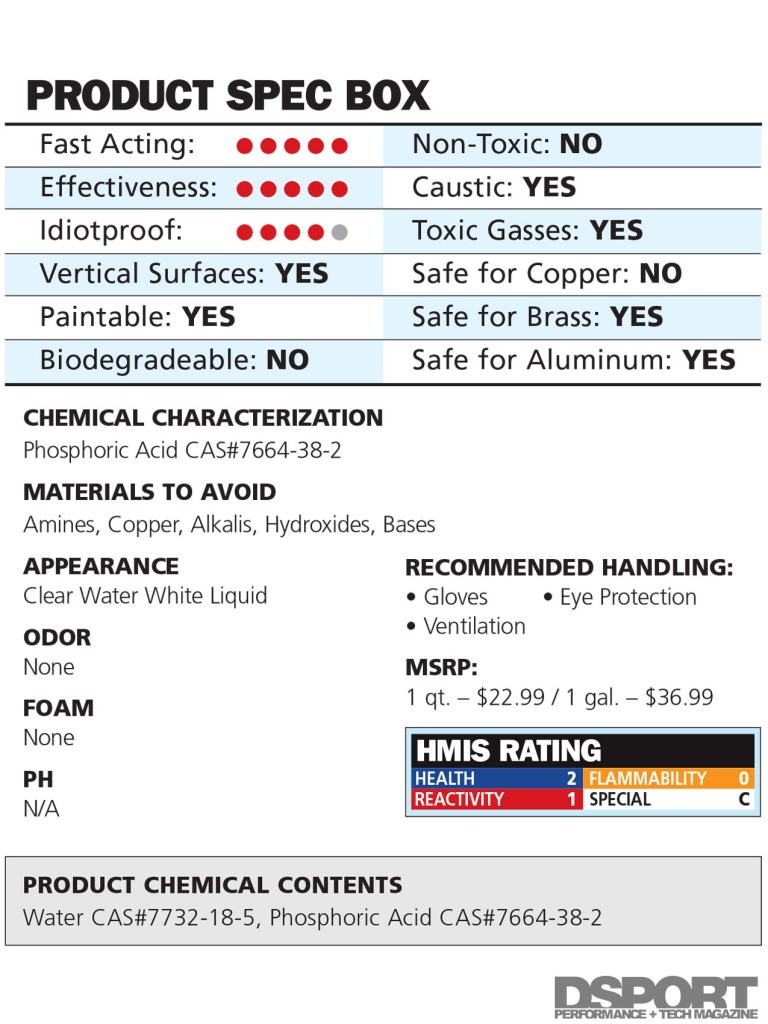 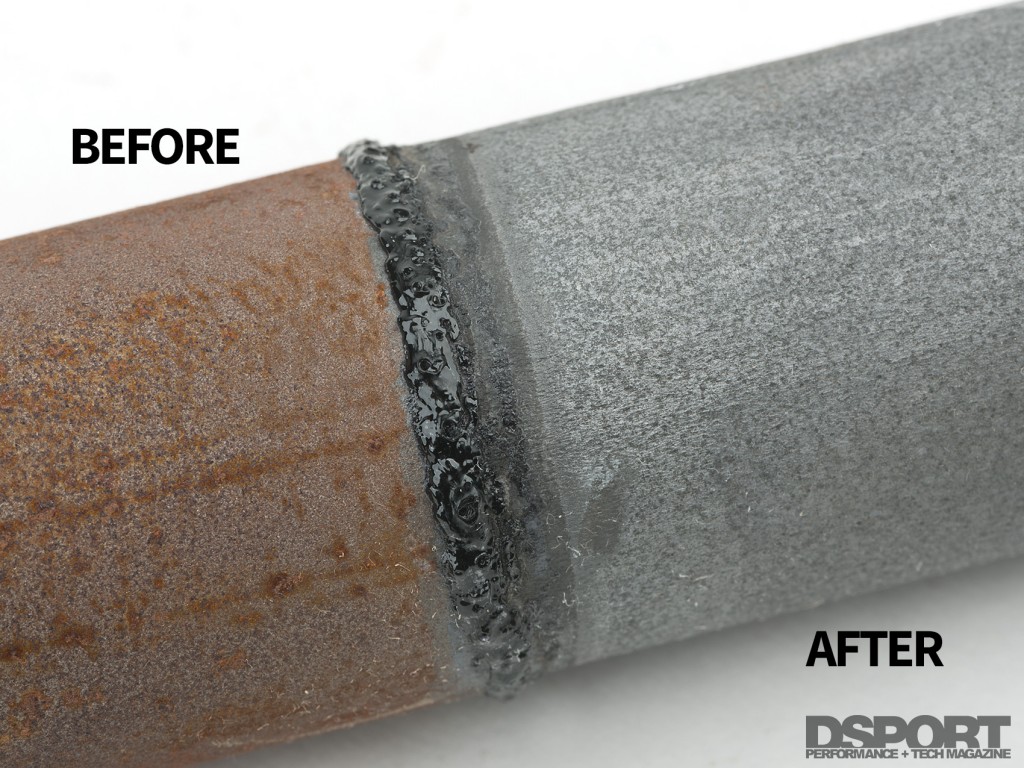 Fast Etch lived up to its name. Not only was it one of the quickest tested, it left a paintable zinc phosphate coating, as advertised.

Pink Power Is Over 40 and Still Working 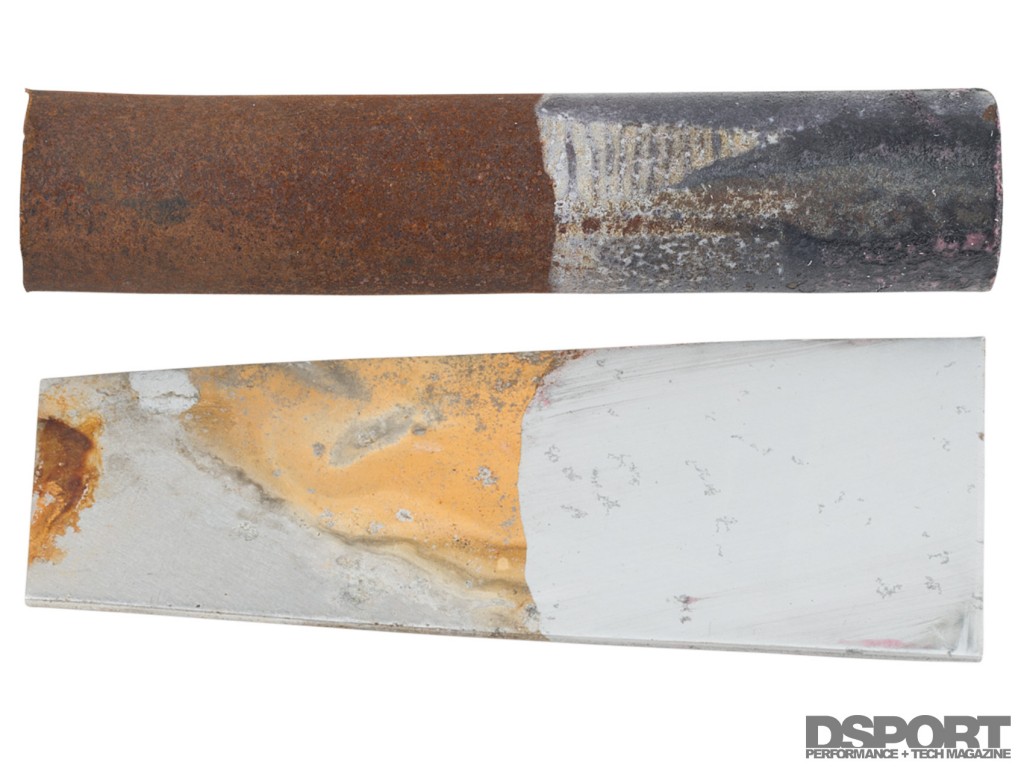 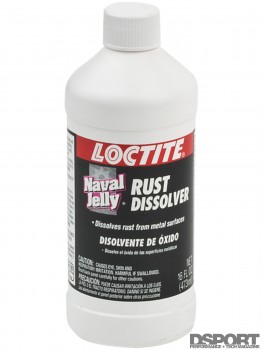 Naval Jelly (does not have anything to do with belly buttons) has been a rust-removing staple for well over 40 years and could be found in the toolboxes of most do-it-yourself handymen. Today, Naval Jelly continues to be a popular rust removal solution. Naval Jelly’s unassuming pink, viscous appearance hides its potent base chemical, phosphoric acid, along with a cocktail of other chemicals including 2-propanol, sulfuric acid, silicon dioxide, diiron trioxide, magnesium oxide and aluminum oxide. Intimidating as its contents might make it sound, Naval Jelly can be simply rinsed away with water.  Within the first fifteen minutes of application, the pink gel already began foaming and dissolving the light surface rust. After an hour, all of the surface rust had been eliminated and bare metal remained. Despite its age, Naval Jelly proved its chemical makeup still capable of taking care of rust. However, the manufacturer cautions against using Naval Jelly on aluminum, chrome, stainless steel, cement, fiberglass, marble, plastic or painted surfaces. After an hour, we observed no signs of negative effects on the copper and brass samples. The aluminum sample, which had some iron oxide stains, was cleaned and showed light signs of etching. Follow the manufacturer’s recommendations, keep it off of aluminum. 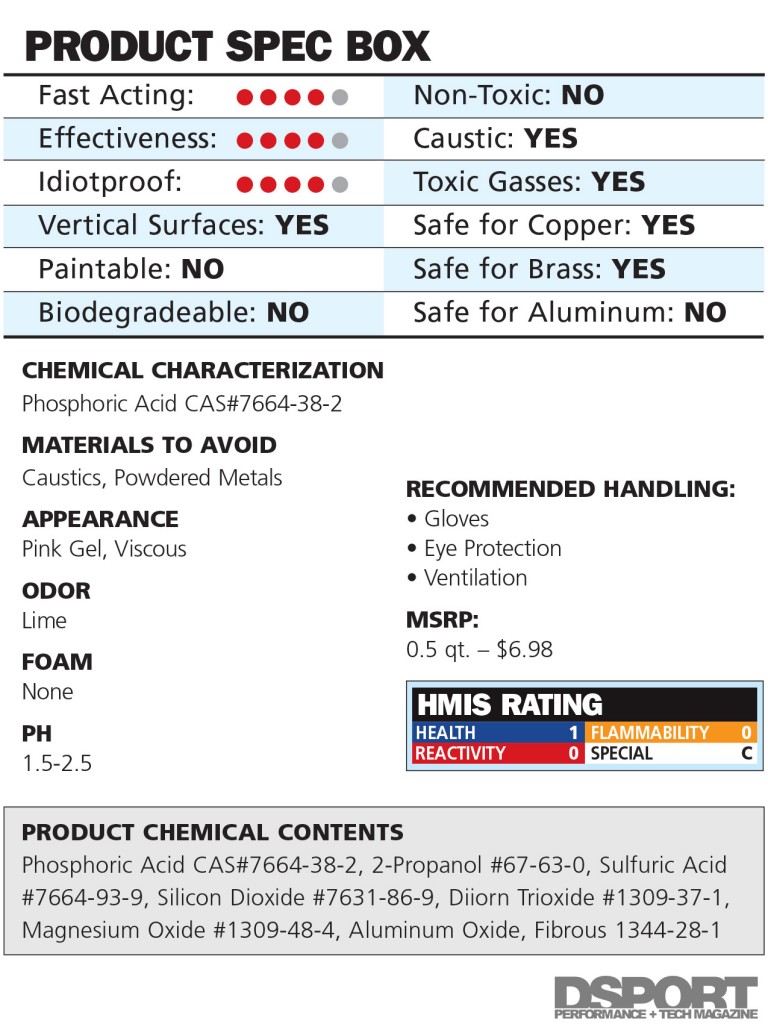 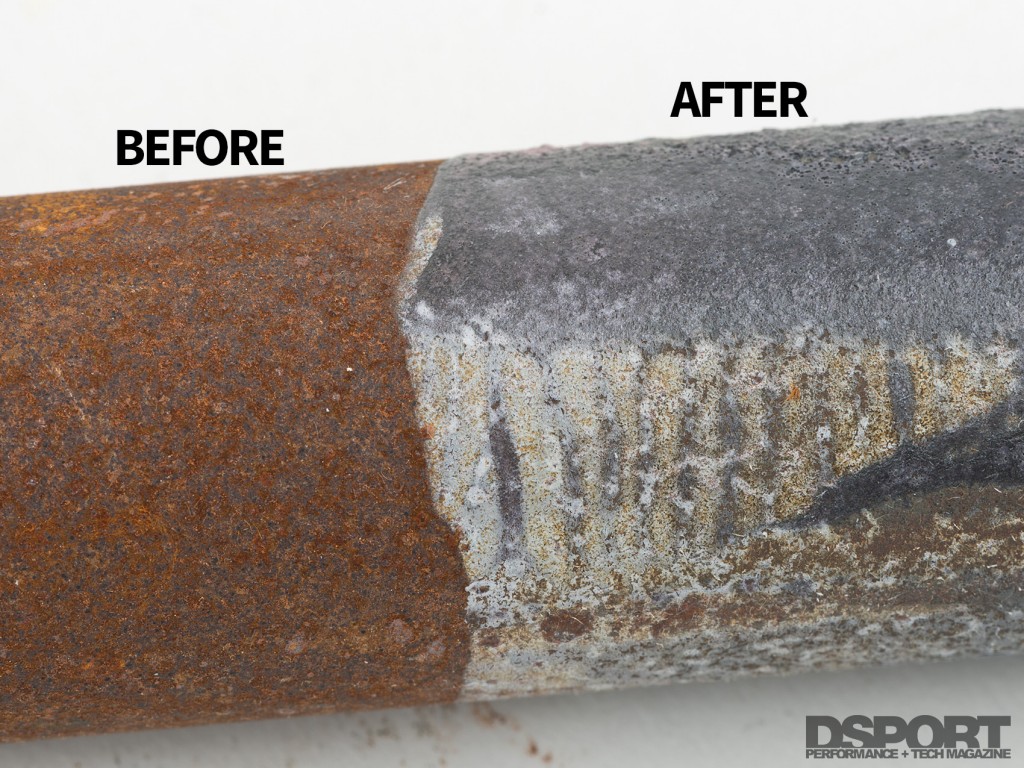 This Is As Toxic As It Gets 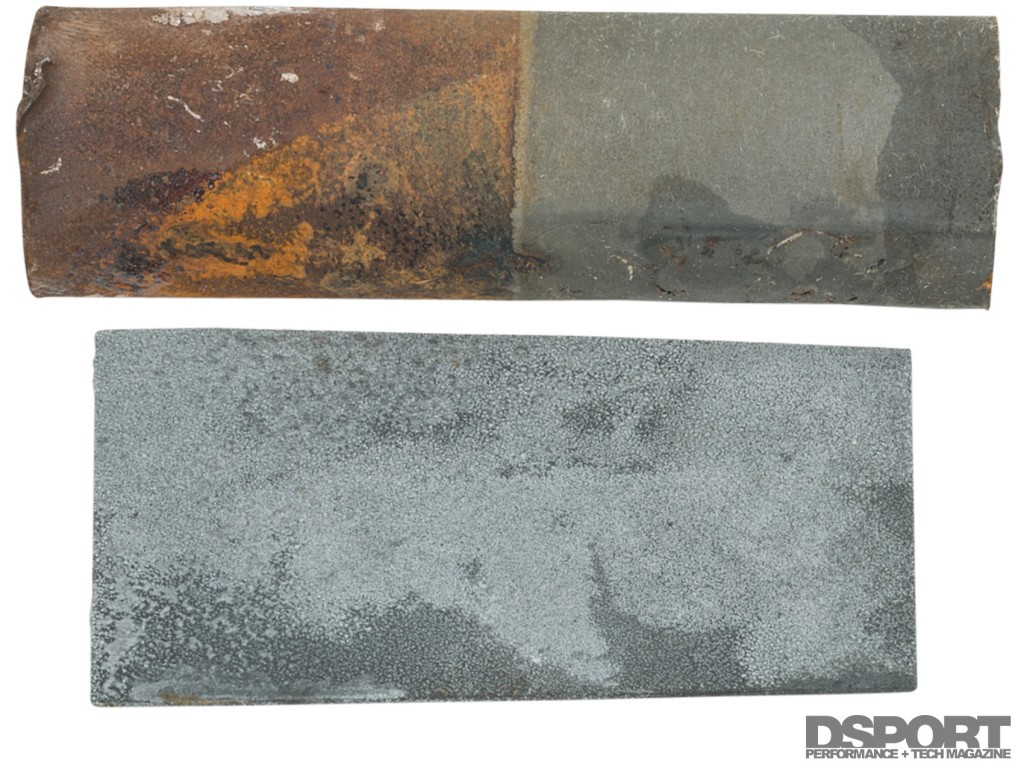 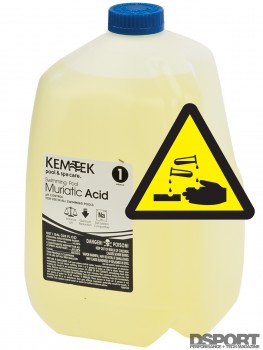 Muriatic acid is as untamed a chemical as one might expect. Its use should be accompanied with the utmost care, as it can cause skin irritation/burns and produces irritating vapors. When it comes into contact with most metals, it releases hydrogen and if in contact with oxidizing materials, it can oxidize into chlorine gas. Now, with all of the hazards, cautions and frightening warnings out of the way, muriatic acid was the quickest rust-removing chemical that we tested. Within the first fifteen minutes, the sample was completely clean of rust, making extended soaking of the material unnecessary.  For the sake of example, a sample was left to soak in the muriatic acid over a 48-hour period. We found that the toxic fumes released by the acid bath actually eliminated all but the most pitted surface rust of the non-immersed portion of the sample. Muriatic acid also proved its caustic nature when a test sample of aluminum was immersed in the bath. Within minutes, the aluminum was corroding and released noxious and likely, toxic fumes. Does this imply that ferrous metals are strong enough to resist this acid? A brake rotor soaked for 48 hours proved that even iron couldn’t resist the strength of muriatic acid. The rotor surface became soft as satin, sharp edges became rounded and parts of the edge of the rotor broke off over the weekend. When used for short durations of time and with a proper neutralizing bath waiting for the parts cleansed of rust, muriatic acid could be a very effective means of rust removal. However, the downside of this chemical and all of the hazards that accompany it put it low on our list of recommended solutions. 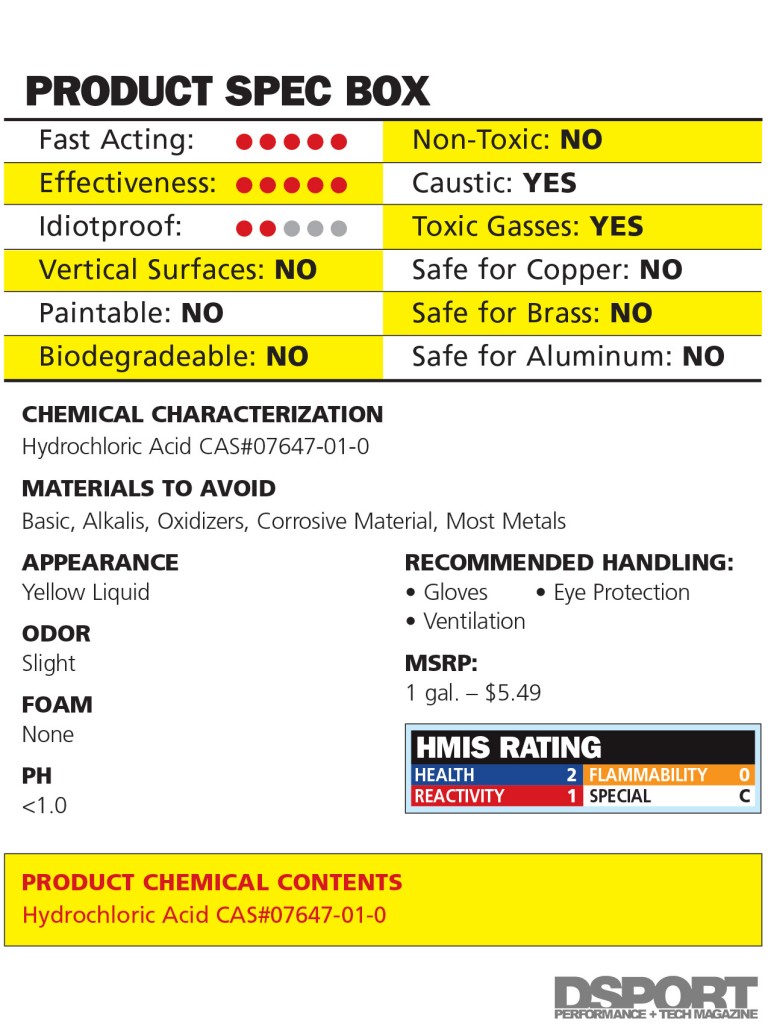 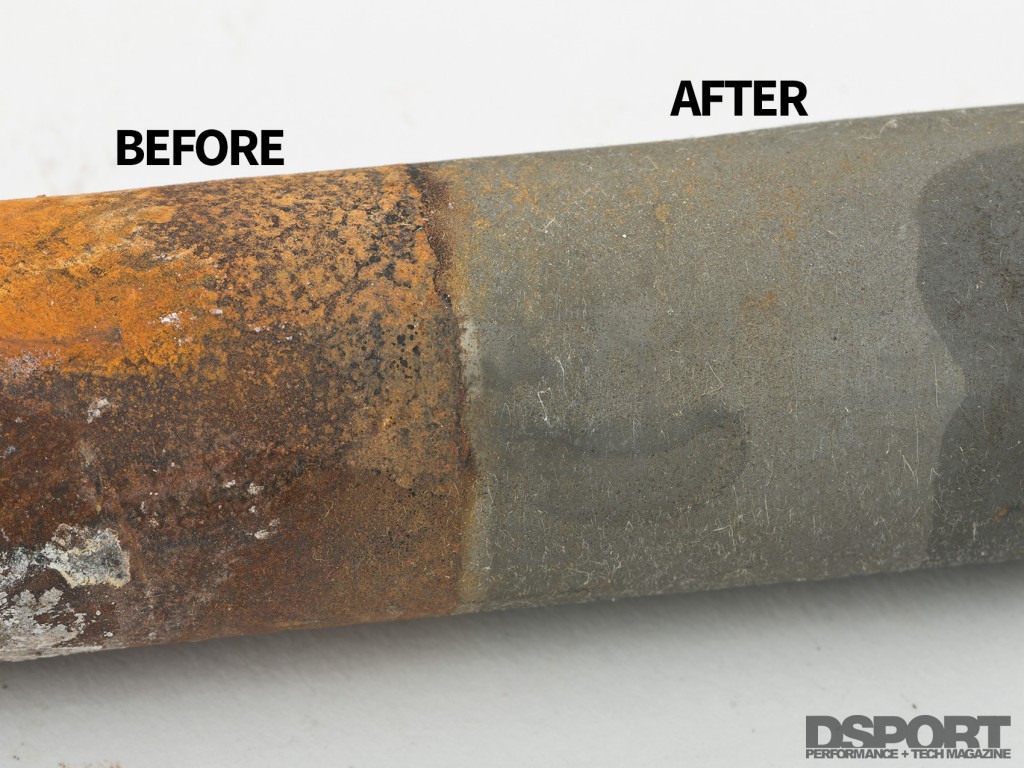 Muriatic acid required the shortest soak time in the bath but releases noticeably toxic fumes. Also, it is not safe for all metals.

While Southern California residents enjoy the weather year-round, the search for high-octane fuel is near impossible. The same struggle can...