Some 4,000-miles East of the United States, Honda engineers from the Swindon U.K. factory were tasked with the design of the Honda Civic Type R (FK8) fuel system. The engineers equipped the vehicle with an efficient fuel system with very little headroom, allowing for only a 10-percent increase in fuel flow before it maxes out. If the K20C1 was a port injection engine, upgrading the fuel system would be a simple affair. However, the K20C1 engine relies solely upon a direct injection fuel system. Finding upgraded parts for a direct-injection fuel system is no easy task. Fortunately, Hondata did the engineering to put together a complete fuel system upgrade for the FK8. With the Hondata fuel system upgrade, an additional 24-percent fuel can be supplied beyond the factory fuel system’s limits. To provide a complete evaluation on the merits of the upgrade, we performed the installation, testing and even custom tuning of the vehicle through the Hondata FlashPro interface. Both 91 octane and a 45-percent ethanol content mix of 91-octane and E85 were tested. Maximizing the performance from the stock turbocharger can be a reality. 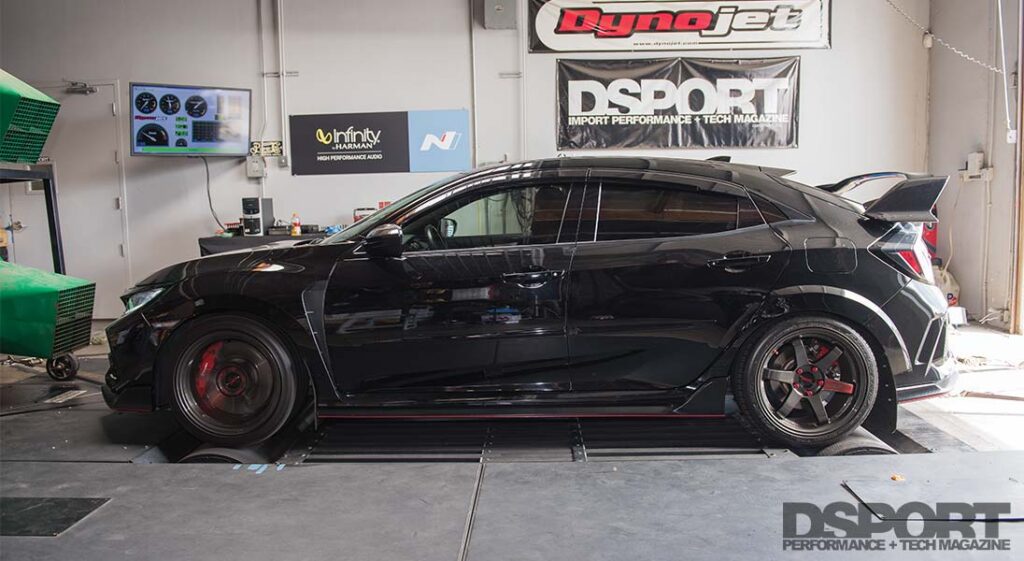 After a long hiatus for a Type R badged offering in the United States, Honda finally released the FK8 Civic Type R powered by a 2.0-liter turbocharged direct-injection engine (K20C1). From the factory, the Type R is conservatively rated at 306 peak horsepower and 295 lb-ft of peak torque. On our dyno, the FK8 put down 296.72whp and 290.63 lb-ft. Back in issue 203, we conducted a Test & Tune installment evaluating some popular bolt-ons. The results showed us that common bolt-on upgrades offered almost no performance increase to this platform. To see performance increases from the Type R, the factory ECU must be jailbroken and reflashed with a Hondata FlashPro or fooled into raising boost levels via a signal conditioner like the DTE Systems Power Control X unit. Going either route, the tuner will soon find the limits of the fuel system and 91-octane performance with the factory turbocharger. While a proper intercooler upgrade is about the best bolt-on part investment to be made early on, substantial power gains require a fuel system upgrade and a change from 91 octane to an E45+ blend or race gas. 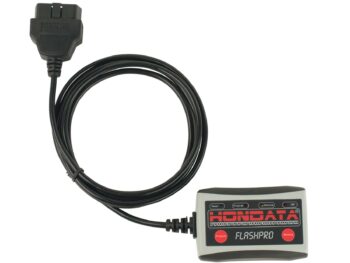 With a bone-stock Type R, we loaded a Hondata off-the-shelf tune. Uploading the map requires no brains. You simply connect the FlashPro to your laptop, load the map you want, then connect your FlashPro to your car’s OBDII port, and reflash it using your laptop. The Type R delivered 318.88whp and 334.96 lb-ft of torque. This is a 7.5-percent gain in peak wheel horsepower (22.16whp) and 15.3-percent in peak torque (44.33 lb-ft). Just like that, we were approaching the danger zone where we will start running out of fuel. That’s when the Hondata FK8 Civic Type R fuel system upgrade comes in place. Before trying to find out the maximum power we can achieve on the stock turbocharger using ethanol mixture, we wanted to see how much of a difference a fuel system upgrade can offer with just 91-octane pump gas. 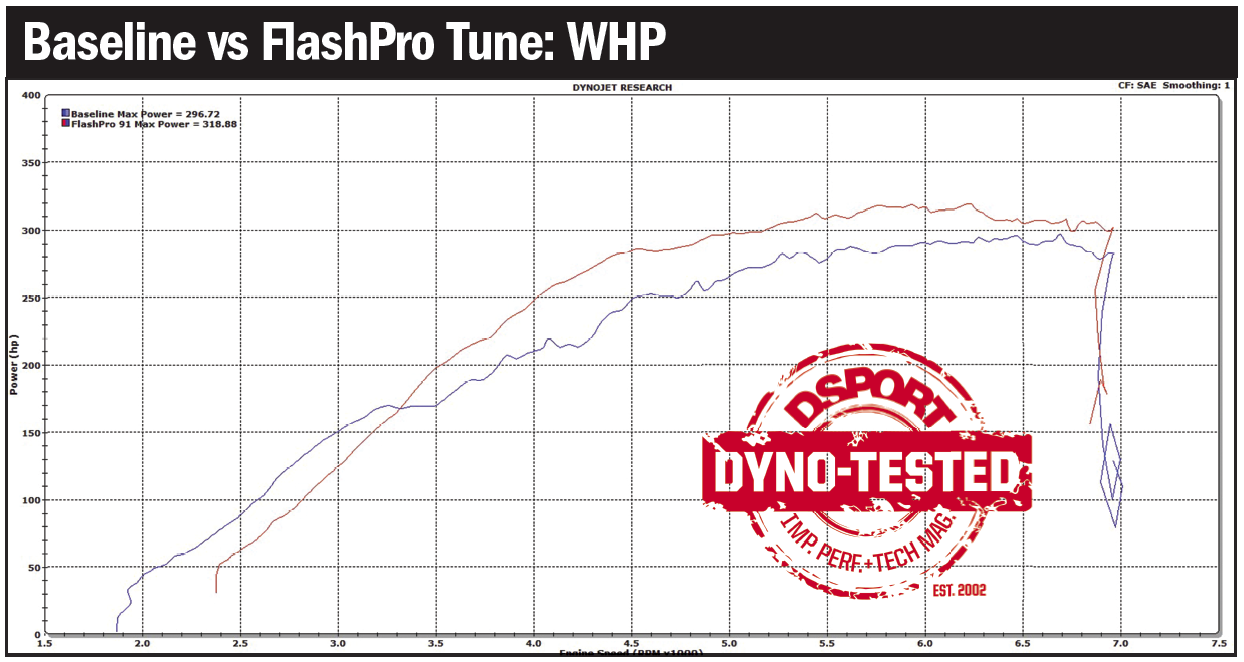 After jailbreaking the OEM FK8 ECU and installing an off-the-shelf reflash with the Hondata Flashpro, significant gains were realized. Peak power was increased by 22.16 horsepower at the wheels while peak torque increased 44.33 lb-ft of torque. However, direct-injector fuel pump duty cycles were reaching the limits. 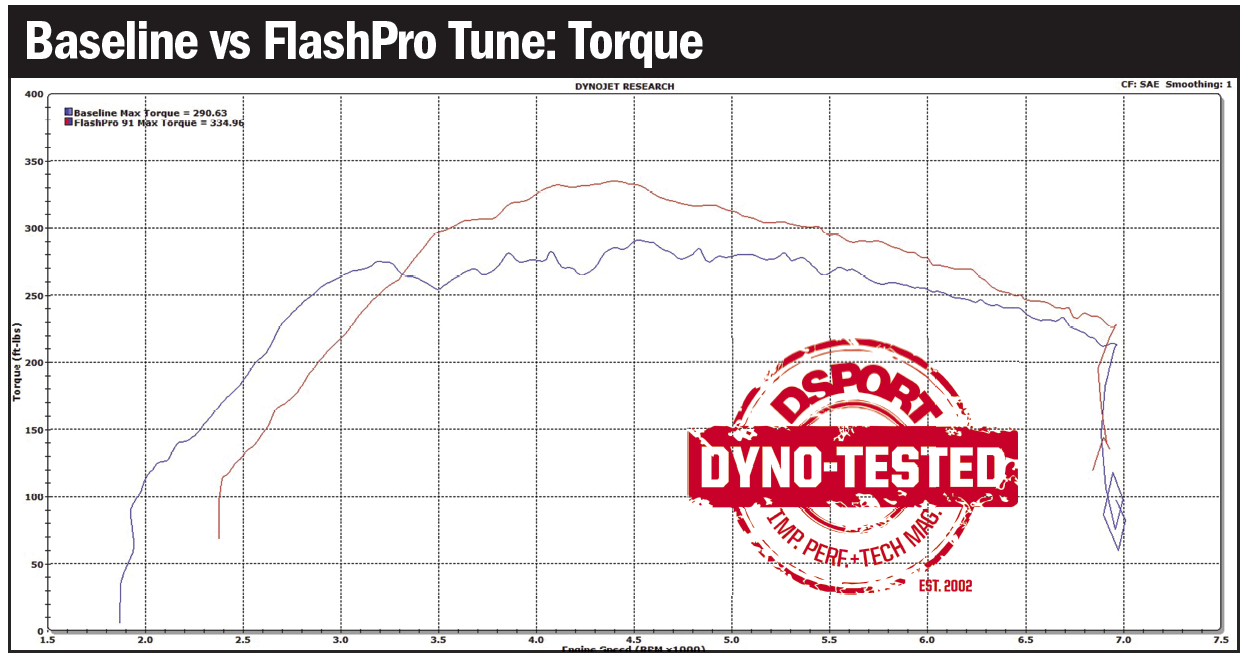 Both the horsepower and the torque curves were smoothed out with the Hondata reflash. Less spikes and more gains throughout the entire RPM range were the result. 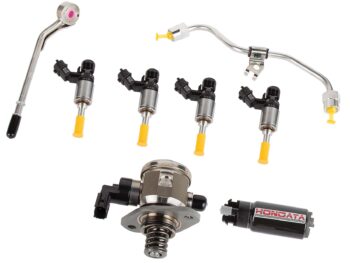 Hondata’s FK8 Civic Type R fuel system upgrade comes with everything you need to completely upgrade your fuel system. This system will replace your components with an upgraded direct injection fuel pump, a higher flow-rate ethanol-compatible-in-tank low pressure fuel pump, higher flow-rate direct injectors, and the proper high-pressure lines. Installation is relatively straightforward, but some specialized tools will make the job easier. You will need to remove the charge pipe, throttle body, and intake manifold to get to the injectors. You will also need to bleed off the pressure in the fuel system before removing the in-tank and the high pressure fuel pumps. If you follow the directions closely and the recommendation in our video, you should get it done in four-to-eight hours. 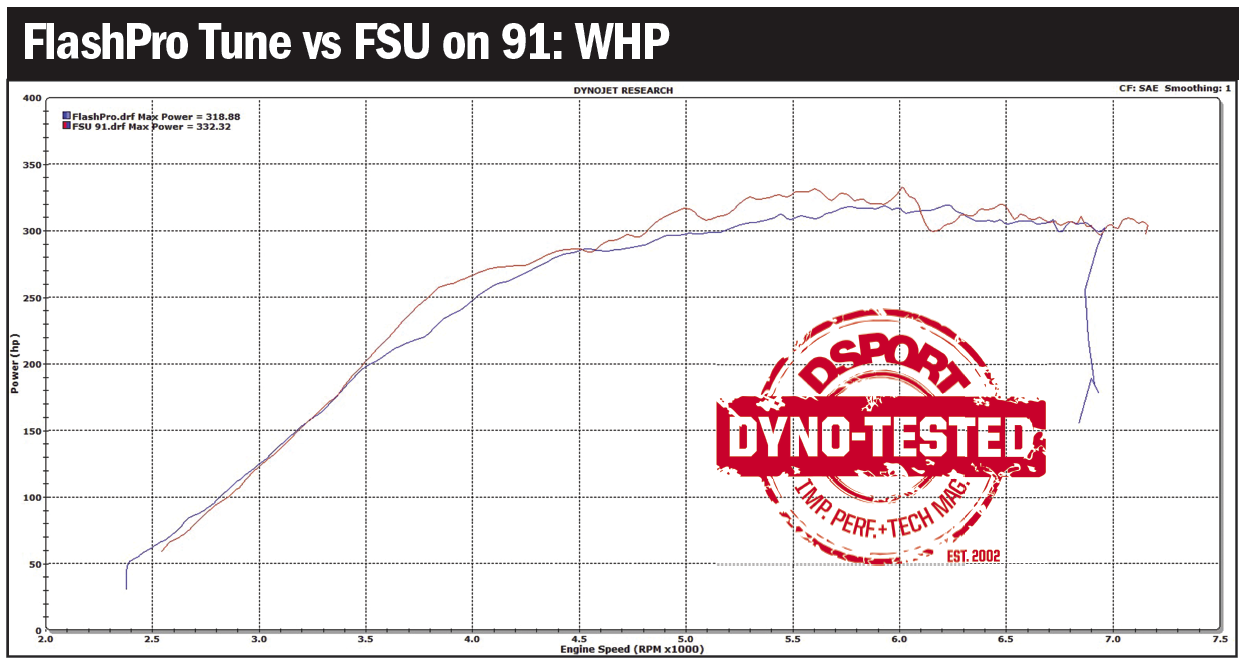 Using the Hondata FK8 Fuel System upgrade, the dyno showed that the factory fuel system was already restricting us. The upgraded system allowed for 13.44 additional wheel horsepower and 16.5 lb-ft of torque while still on 91-octane pump gas.

Using a SiriMoto flex fuel kit, we blended a mixture of E85 and 91-octane. The result was E45 fuel. This is the target mixture for maximum performance with maximum range at this modification level. Hondata’s testing indicated no significant power gains at higher ethanol content levels with the stock turbocharger in place. We used a Hondata flex fuel off-the-shelf map designed specifically for this system; the Type R now put down a peak 362.21whp and 357.36. The E45 rewarded us with a peak gain in wheel horsepower of 29.89, a 9-percent increase and 22-percent gain from stock. The dyno graphs showed tremendous improvement from 4,000 RPM to redline with over 90whp gain in some areas compared to stock. Running E45 would also allow the engine to run cooler combustion temperature. We could run E85 fuel, but it wouldn’t add any power with the stock turbocharger in place. 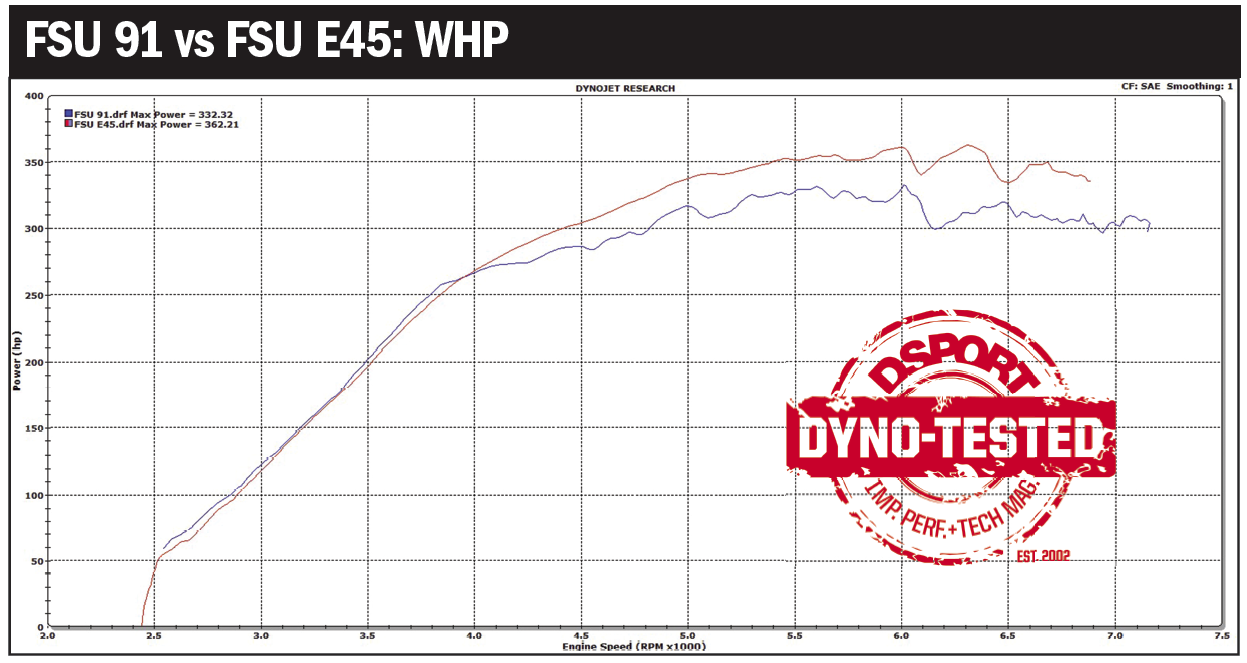 Switching to E45 fuel showed significant difference and improved the curves. An additional 30whp gain was realized, and 22-percent increase compared to stock power. Higher ethanol percentages provide no significant benefits at this performance level with the stock turbocharger.

After reaching the limit on the off-the-shelf map, Publisher Michael Ferrara decided to dive into the FlashPro software for some fine tuning. Michael noted it was very easy to navigate and he squeezed an additional 21.54 peak wheel horsepower and 13.92 lb-ft of torque in less than an hour. This took the total to 383.75whp and 371.28 lb-ft of torque while using about 83-percent of the capacity of this fuel system. 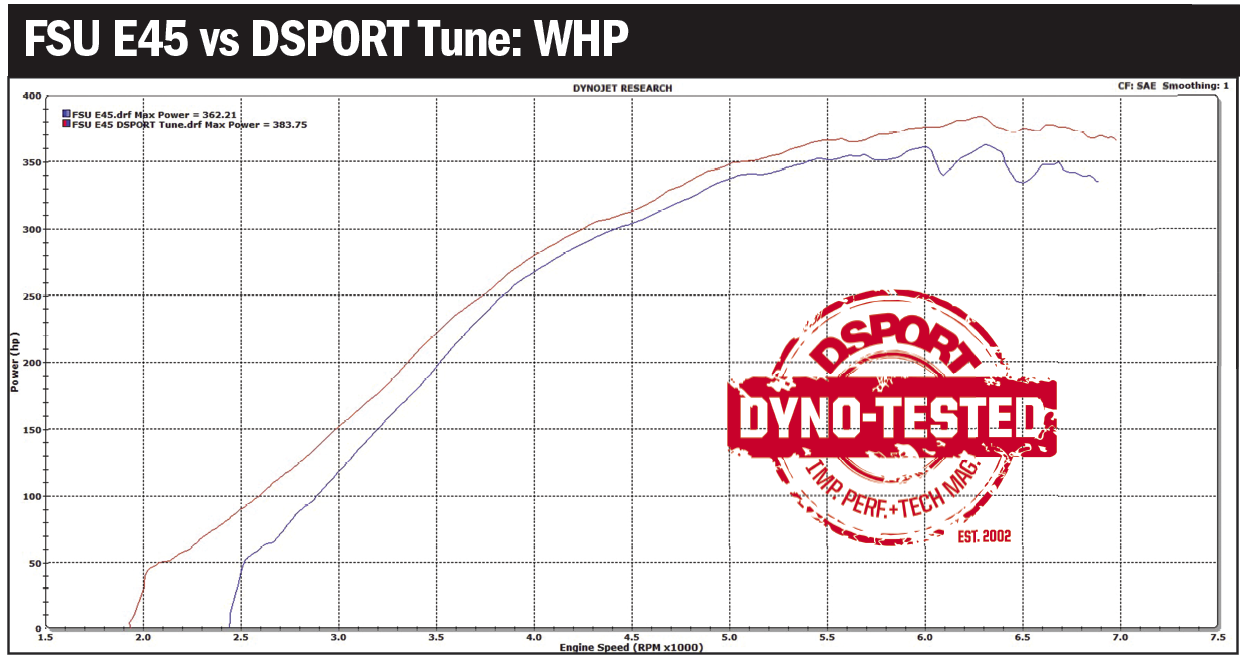 Michael Ferrara is no stranger to tuning; however, he had never played around with the FlashPro. With some custom tuning through the software, he was able to squeeze an additional 21.52whp and 13.92 lb-ft of torque, calling the software extremely easy to use. 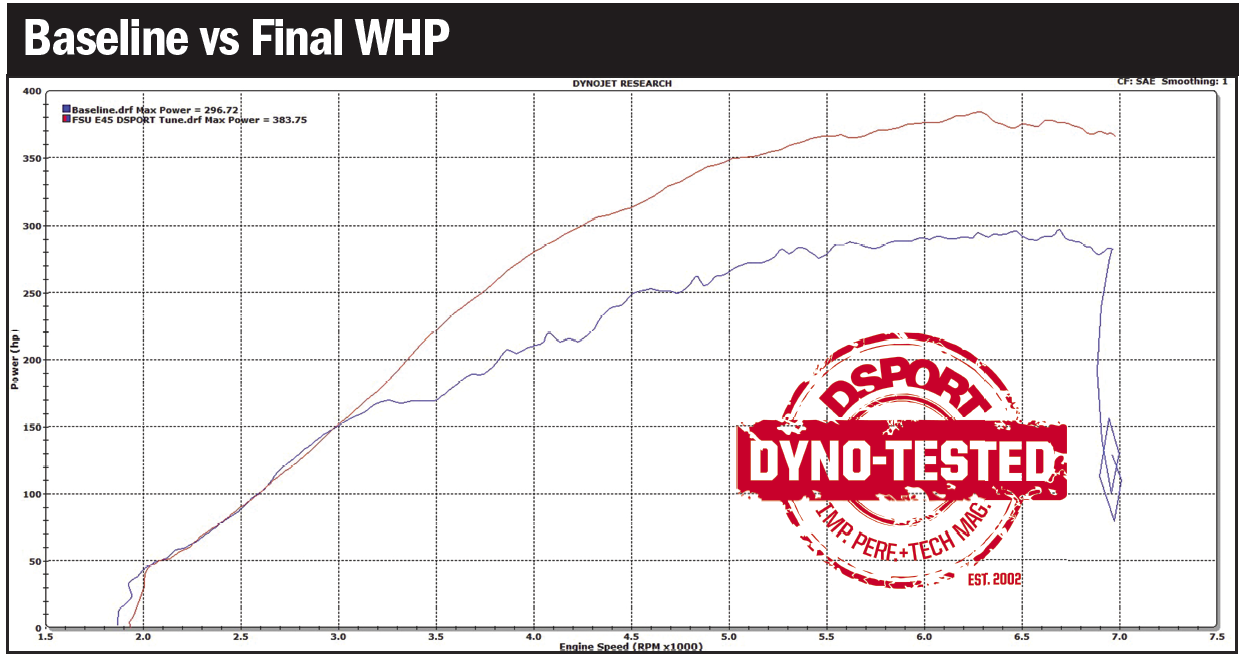 The final horsepower result using the Hondata FK8 Fuel System upgrade was 383.75whp, with over 90whp gain in certain areas. With this setup, we are running the fuel system at 83-percent capacity. The factory turbocharger is giving all it can and an upgrade would be next to see more power. 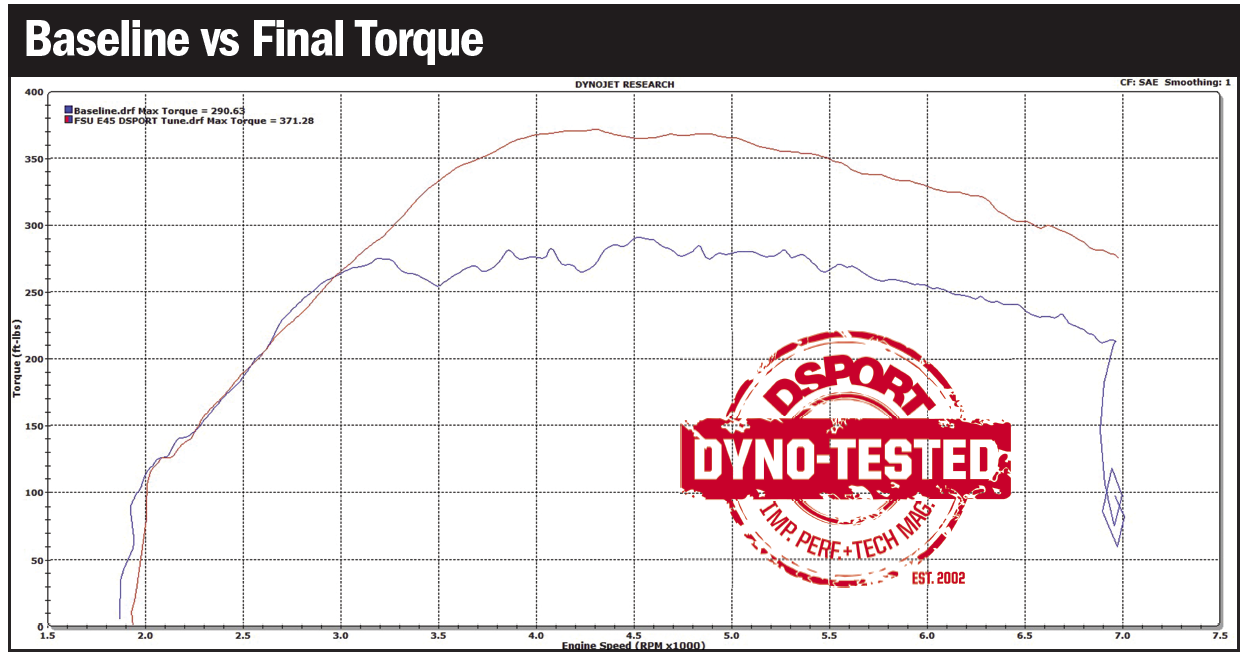 A final 80.65 lb-ft of peak torque was the result of the testing, a 27.8-percent increase in peak torque. Drivability is much smoother  at part and full throttle according to customers running this system; however, we didn’t have time to evaluate it ourselves on the road. Massive gains start at 3,000 RPM all the way to redline.

If you want to make power in your Honda Civic Type R, you have to tune it, and if you want to make a significant gain, you have to upgrade its fuel system. The Hondata FK8 Fuel System upgrade resulted in a total of 86.03 peak wheel horsepower gain and 80.65 lb-ft of torque on E45 fuel. With this performance level and turbocharger, there won’t be any merits going to an E85 ethanol mixture, which works out in your favor in terms of fuel consumption. Both power and torque improved throughout the entire RPM band, with a torque gain in excess of 90whp at 5,500 RPM and 105 lb-ft at 4,200 RPM. From here, a turbocharger upgrade will be your only outlet to make any additional power. On E45 about 430 wheel horsepower will push the fuel system upgrade to the limit while it could support over 550whp on race gas. The FK8 fuel system upgrade will set you back $2,850, but you will get a non-compromise, stock appearing solution that will deliver OEM reliability. No OEM parts are modified, so returning to stock is always easily achievable. Stay tuned as we continue to explore this platform and test a sport turbo type upgrade to maximize power on the stock engine.