Considered to be one of the first go-to upgrades, choosing the right aftermarket catback exhaust system is an important step in every car enthusiast’s upgrade path. Each exhaust system on the market offers a unique sound character, hardware, looks, and affects the car’s performance differently. You simply can’t choose one exhaust for everyone. While OEM technology has reached an extremely efficient level, providing almost no restrictions after the downpipe when using the stock turbocharger, replacing the factory system is almost a must for every car enthusiast – especially on the Civic Si. The Si is one of the quietest performance vehicles on the market today, with nearly no character in terms of sound. We gathered 10 of the most popular exhaust systems on the market and put them through vigorous testing. This will give you the data you need to make a purchase whether you’re looking for sound, looks, power, or build quality out of your new exhaust.

Results are only as good as its repeatability. Any test we do, we have to be able to repeat it. Most OEM vehicles today use a controlled strategy that makes it difficult to get repeatable results, especially in the 2019 Honda Civic Si. Before jumping into testing 10 exhaust systems with this platform, we had to assess the obstacles and find solutions that would allow us to get real, accurate results. 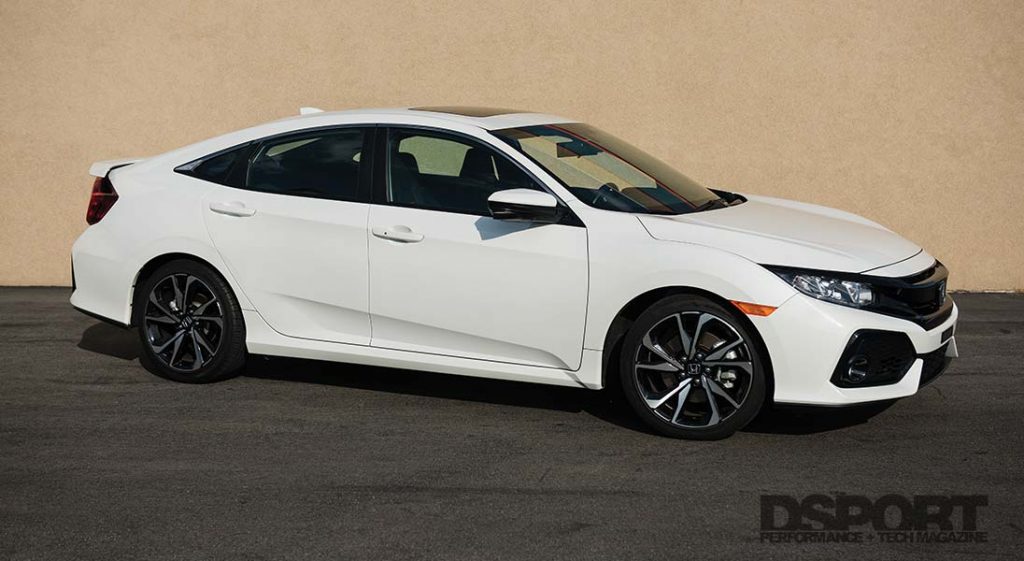 Problem 1: The 2019 Honda Civic Si has a torque request/limit ECU. This means that it’s set at a torque level, and regardless of the upgrades you do, the ECU will adjust accordingly to hit that specific torque number, preventing you from making any power or torque. This would stop us from seeing any potential results when testing our exhaust systems, or any other bolt-on upgrades.

The Solution: In order for us to get accurate results, we had to change the factory tune. We opted for a Hondata FlashPro tune. This would allow us to raise the roof on the maximum torque and see what each exhaust actually does in terms of power and torque.

Problem 2: When using California’s poor fuel quality, we tend to experience knock. Even the 91-octane fuel we use has proven to cause detonation, putting our car at risk and our testing in jeopardy.

The Solution: We opted for a Flex Fuel Kit from SiriMoto that would allow us to run E85. The mixture of 85-per- cent ethanol and 15-percent gasoline serves as knock/detonation resistant, all while keeping the engine significantly cooler, making it a nice up- grade for any car enthusiast and a great solution to keep our test repeatable and accurate.

Problem 3: When running the car on the dyno time after time, heat soak becomes an issue. This reflects on the dyno results and provides us with inaccurate num- bers. Maintaining cool air is crucial for repeatable results.

The Solution: We opted for an upgraded intercooler from GReddy to replace the factory unit. This will ensure we are maintaining cool temperature throughout our testing and removing one more variable that could hurt our results.

Problem 4: Having the factory air box could be a reason for

air flow restriction since it is the first stop that incoming air has to go through. It could also present an issue with keeping the incoming air into the engine cool.

The Solution: We replaced the factory air box with an MAPerfor- mance cold air intake with a Green Filter. This will eliminate potential restrictions and ensure all incoming air stays cool enough to provide us with repeatable dyno results. 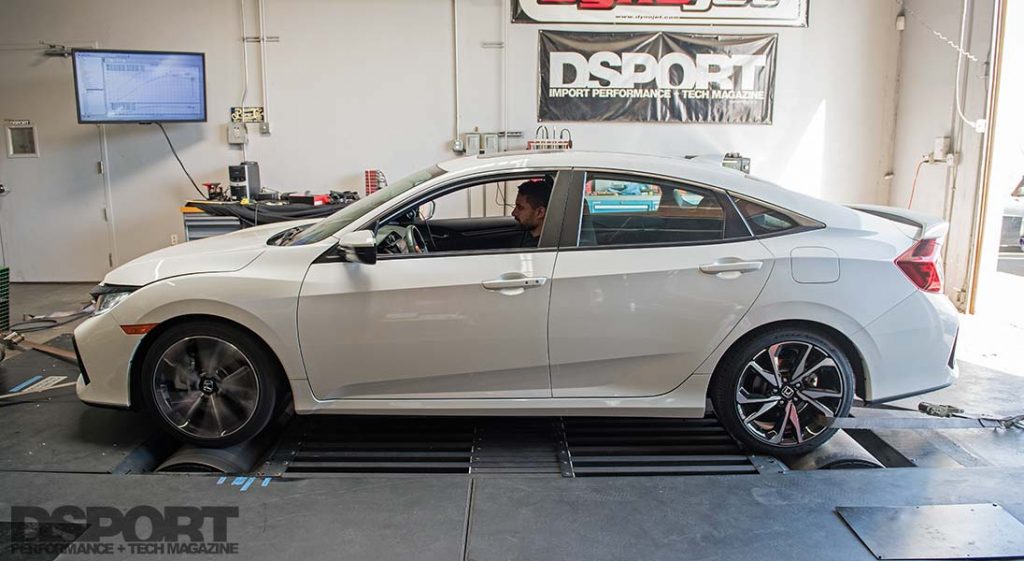 To get the most accurate results in the test, we evaluated each exhaust on the same vehicle, with the same testing equipment, and in the same environment and conditions. Each exhaust system starts on the dyno using a Dynojet 424xLCs Linx AWD Dynometer. The dyno portion consists of at least three runs to ensure we have a good, clean graph.

To conduct the sound test, we use a Radio Shack Sound Level Meter (33-2055). The sound meter is placed 20-inches away from the exhaust at a 45-degree angle as per the California Vehicle Code Section 27151. This section states that the maximum decibels sound limit is 95dB at 75% of the RPM redline. Each test highlights the sound level at Idle, 2,000 RPM, 3,000 RPM, 4,000 RPM, and 4,500 RPM. To capture the in-cabin sound levels under load, we performed a driving sound test at a cruising RPM, then a decibel reading under aggressive driving conditions in second gear.

Finally, using a collected opinion from DSPORT Editors and Staff, we rated each exhaust from 1-5, five being the most favored, to assess the sound quality, appearance, construction, and overall fit and finish.

Click the links below to view more information about each exhaust.

Easy Power is Not so Easy

If you own a vehicle that’s only a couple of years old, the days of bolting on a cat-back aftermarket exhaust system on your turbo car and seeing a 20-40whp gain are over. As our testing of the Top 10 aftermarket exhaust systems for the Civic Si Sedan have shown, many OEMs no longer equip turbo vehicles with an exhaust system that chokes away the power. The factory exhaust system on the Civic Si doesn’t seem to be a restriction when you are maxing out the factory turbo at 240whp (approximately 283bhp at flywheel). We never expected it to do so well. In fact, we designed our test to be run at a higher horsepower levels than stock so that any limitations in the factory cat-back exhaust would become apparent. This also made sure that an aftermarket system would also fare well at higher horsepower levels and not just factory power levels.

The ECU in the Civic Si has a control strategy that has become standard on many newer vehicles. This strategy employs torque request/torque limit tables based on throttle input and engine speed. If the ECU calculates that the engine is not making the requested torque, it can open the throttle or raise the boost until the requested torque is made. That all sounds great. However, the flipside is that the ECU can also close the throttle or lower the boost pressure when the torque request target is hit. This means you can put on a performance part that should allow a vehicle to make more power, but the ECU simply lowers the boost or closes the throttle once the torque number in the factory table is reached. The only way around this is to get into these torque tables and raise these limits. This can only be done by reflashing the ECU. On today’s vehicles, this is the first step on any performance journey. For the testing of these exhaust systems, we filled the torque request table with numbers higher than could ever be reached. In doing this, we made sure that throttle and wastegate duty numbers were maxed out during the test. We expected this to result in all of the exhaust systems being run at the same boost level. Instead, the maximum boost level achieved varied with the different exhaust systems. In order to provide a set of results that compensated for the differences in boost, we did the math to produce a table showing the theoretical power output if all the exhaust systems had identical boost pressures. In this table, some of the exhaust systems that delivered seemingly average numbers excelled in theoretical power output.

Boost Corrected Horsepower…How Correct is it?

So which horsepower figures should you rely upon? That’s up to you. There is the one school of thought that the raw dyno numbers tell the story. Under these same test conditions, some exhaust systems did better than others running on the exact same tune. If you are a believer in real-world results, use these numbers for comparison. The other school of thought is that the exhaust systems that delivered the highest boost-corrected horsepower are the best in terms of performance. In theory, if there aren’t other factors at play, these exhaust systems should deliver the most performance IF the boost could be turned up to the same level as the systems that managed higher boost levels. But, with the factory turbo, it can’t be turned up anymore. We maxed it out. Which leads us to our last point. Why would some exhausts cause the engine to run at higher or lower boost levels? In some cases, a major exhaust restriction can create so much backpressure in the exhaust system that the difference in pressure before and after the turbine isn’t enough to drive the compressor any faster. We experienced this on our Project RH9 GT-R a long time ago when an extremely restrictive exhaust silencer was inserted into the muffler. In these cases, the wastegate never even opens. Looking at the logs on the Civic Si dyno pulls, this was not the case. What did cause the difference in measured manifold boost pressure? There are two possibilities that are the most likely. First, atmospheric conditions may have been different on the different runs (temperature and barometric pressure). If the pressure going into the turbo (compressor inlet) increases, the pressure coming out also increases. If atmospheric conditions are the same or not different enough to cause the difference in recorded manifold boost pressure, a second reason might be the cause. If one exhaust system is recording a lower back pressure than another, the boost pressure is going to drop by that same amount. What many people fail to realize is that the intake manifold boost pressure is the pressure of the air not making its way through the engine. Improving the airflow through the engine with better cylinder head porting and camshafts drops the boost level at a given horsepower all other factors being equal. To truly determine what factors were at play, we would need to have recorded exhaust back pressure and all atmospheric conditions. At the end of the day, additional performance gains are going to be minimal on the Civic Si. This means that the looks, sound and construction of the system should probably be prioritized over performance.