You are at:Home»The Tech»Education»The Automotive Valvetrain and How It Works

The Automotive Valvetrain and How It Works

“Nobody gets in or out unless I say so,” said the camshaft to the valves. The valves represent the doors into and out of the cylinders of the engine. How wide these doors are opened, for how long they’re open and when they open and close are all dictated by the camshafts. While the camshafts conduct the valvetrain, springs, retainers, and valves themselves are all players in the orchestra.

When it comes to building a high-performance engine, the valve springs must be matched to the camshaft and application. The springs must have enough pressure to close the valves and keep them closed at high boost levels. On the flip side, excessive pressure must be avoided or premature lobe wear of the camshaft and follower can occur. Retainers must be matched to the spring to keep the spring located properly and locked in place on the valve. 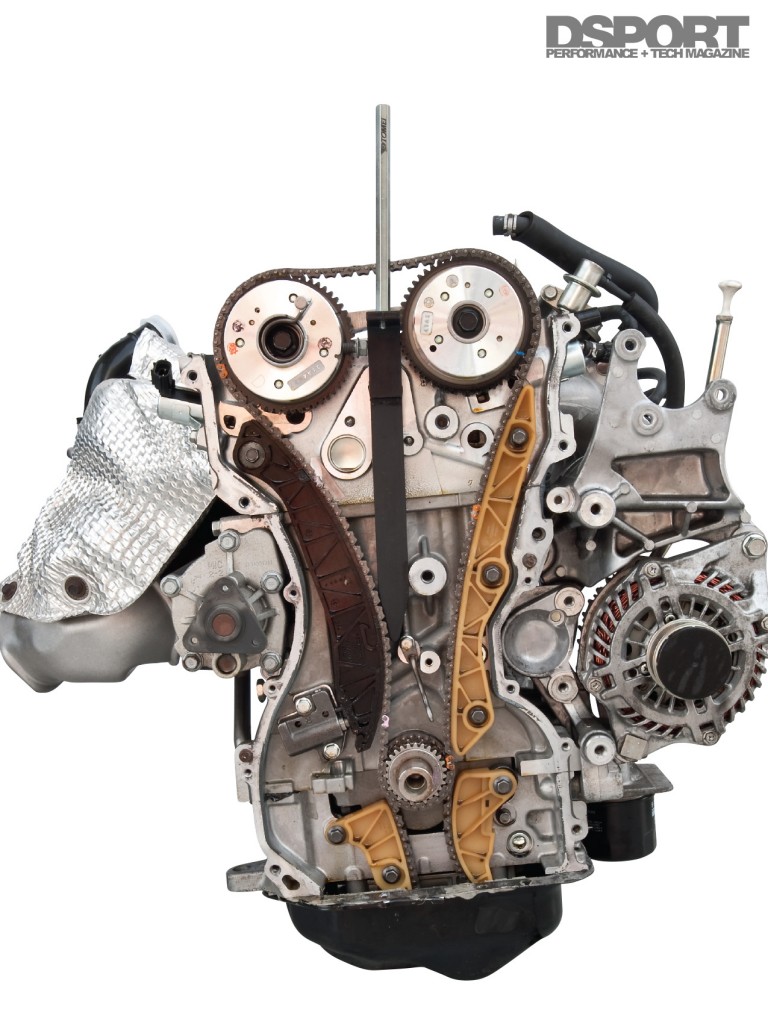 Lightweight materials in the springs, valves and retainers reduce the likelihood of undesirable valve float in the valvetrain. As for the valves themselves, special-alloy exhaust valves can survive the torture of boosted applications while stainless-steel alloys are the material of choice for intake valves. On some cylinder heads, oversized intake and exhaust valves (usually +1mm) can be installed to increase the flow potential of the cylinder head.

Among all the components that make up an engine, the camshafts play the most significant role in determining the behavior and character of the engine. Most OEM camshafts offer idle characteristics that are smooth and polished while allowing an engine to meet emission requirements. A radical aftermarket full-race camshaft may produce an idle that is rough and raw. A mild camshaft may regulate an engine to produce massive low-end torque, while a slightly different camshaft profile in the same engine may soften up power production at the low end while allowing the engine to pull strong up to redline. Understanding the function, design and limitations of the camshaft will allow you to maximize your performance experience.

Function of the Camshaft

The four-stroke process that occurs in your car’s engine is as follows: intake, compression, power and exhaust. While the crankshaft’s position, crankshaft’s stroke and the connecting rod length ultimately determine where the piston will be in the cylinder at any given degree of rotation, it’s the camshaft that determines the position of the intake and exhaust valves during all four strokes.

In the performance symphony, the camshaft is the conductor of valve events. It orchestrates which instruments play (intake or exhaust valves), when they play (opening and closing events) and how loud they play (valve lift). Whereas OEM conductors (cams) offer a classical sound, aftermarket cams can really make your engine rock. 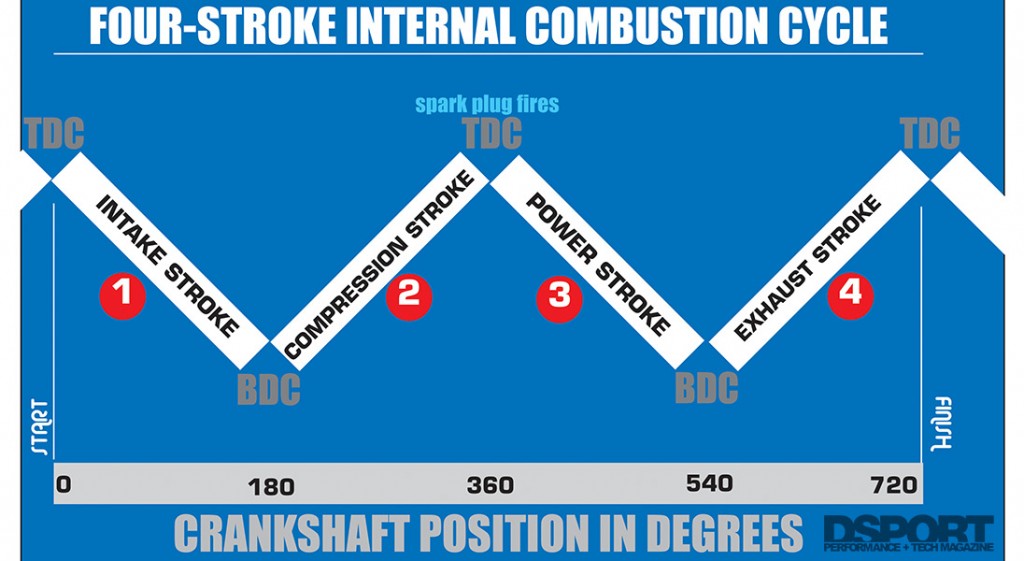 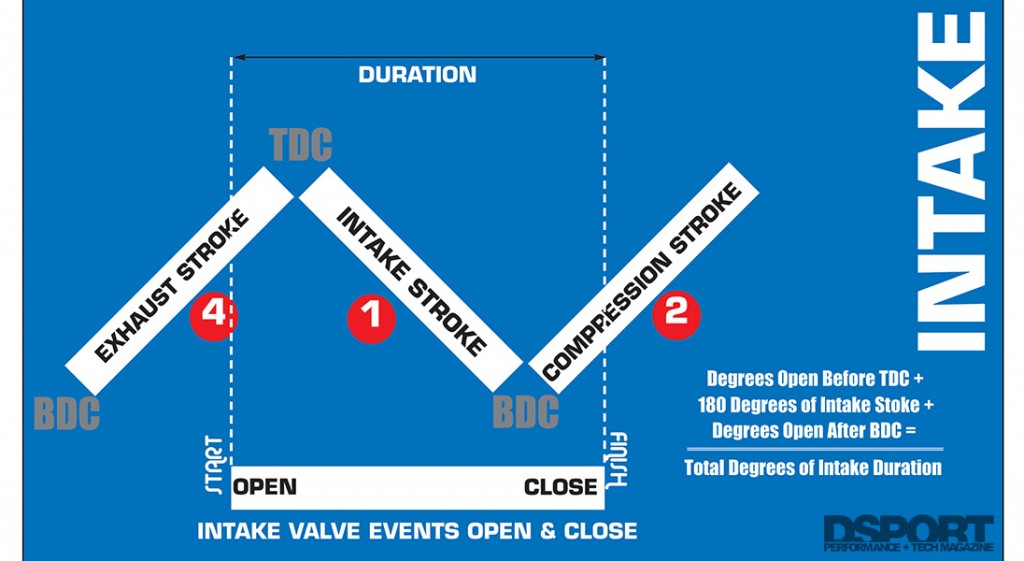 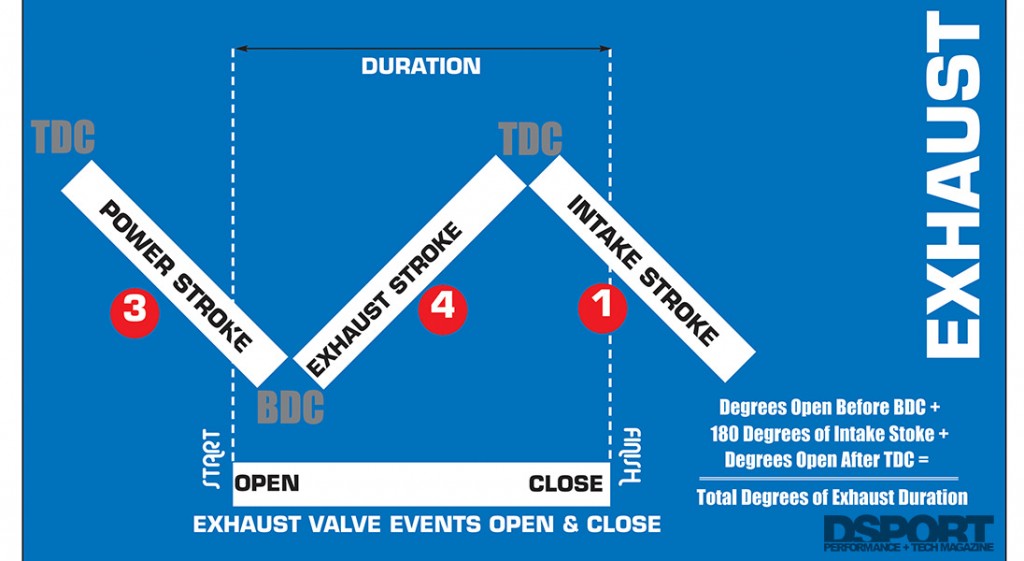 The Band of Power

As mentioned earlier, the camshaft will determine an engine’s character. The engine’s character in terms of power production is often termed the “powerband.” Where does the engine begin to make power? Where does the engine begin to fall off in power production? Is the power delivery flat and consistent or aggressive and peaky? These questions are answered in the description and understanding of the engine’s powerband. Some powerbands are narrow in range, while other are deemed broad. An engine that makes appreciable power from only 6,000 to 8,000 RPM (a range of 2,000 RPM) would be considered to have a narrow powerband. A comparable-sized engine that makes power from 3,000-to-7,000 RPM (a range of 4,000 RPM) might be considered to have a broad powerband. Some powerbands have several small ranges of significant power gains and drops (these are considered peaky powerbands) while others continue producing relatively the same amount of torque throughout the rpm range; these are generally considered to be flat powerbands. The camshaft and its complimentary valvetrain components will establish the powerband of the engine more than any other internal components of the engine.

So how do you get the perfect cam? A cam that has tremendous low-end torque, a 10,000 RPM redline, an idle like mom’s car and a broad powerband from idle to redline doesn’t really exist. In many ways, cams can be compared to turbochargers such that each component may significantly influence the character of the engine. Just as there isn’t a turbo that will provide instant response and 1,000 horsepower on your four-cylinder engine, there isn’t a camshaft that will maximize power at every engine speed and provide smooth idle characteristics.

Fortunately, choosing the right aftermarket performance camshaft for your particular combination will deliver big performance rewards. Increased power, increased torque, increased rpm potential and a broader powerband are just a few of the benefits that could result from choosing the right cam. While a quality set of cams requires a nominal investment, there is a good chance that aftermarket cam(s) may be the best performance investment that you make. 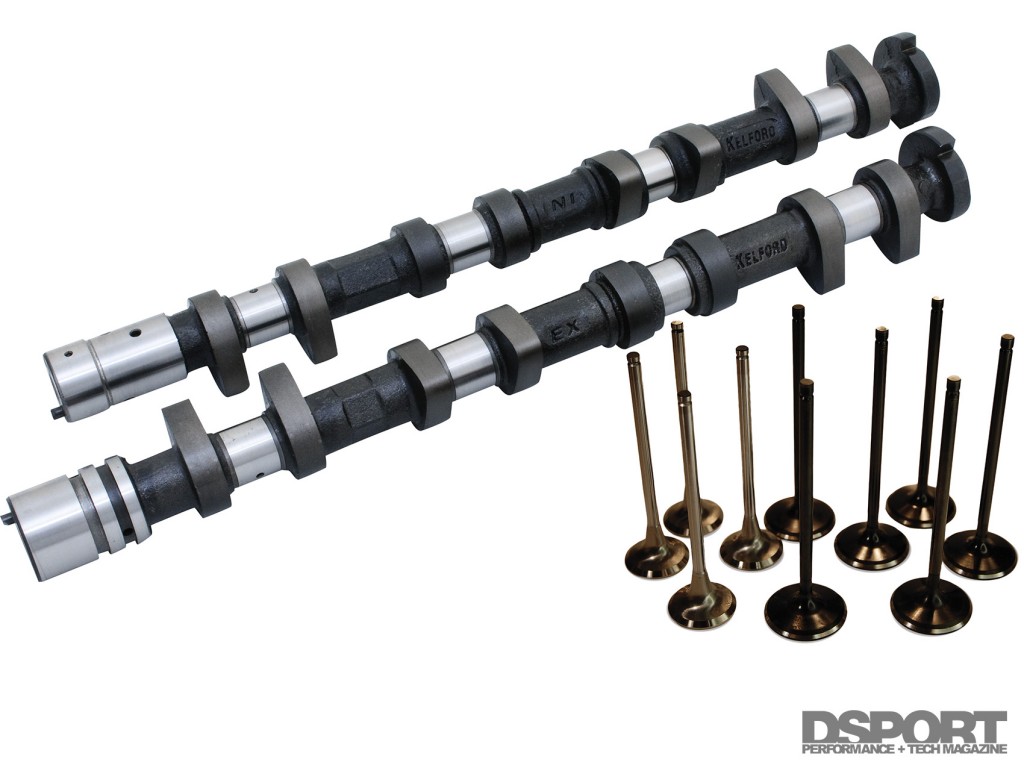 Aggressive cams should be teamed with upgraded valvetrain for performance and reliability.

For every action, there is always a reaction. From a performance standpoint, the faster a valve opens and reaches full-lift, the better. Why? Horsepower is directly related to how much air and fuel can be stuffed into the cylinder. Air and fuel can’t get into the cylinder unless the valves are open. Camshafts that quickly open the valves are said to have an aggressive lobe profile. Unfortunately, the laws of physics govern the maximum amount of possible valve acceleration or “aggressiveness.” If the camshaft profile tries to accelerate the valve too fast, excessive wear or valvetrain problems can occur. Subsequently, a camshaft cannot return the valve to its seat too quickly or it may damage the valve or possibly cause the valve to “bounce” back open.

Most modern cam designs optimize valve acceleration rates by designing camshafts with asymmetric lobes. This style of lobe lifts the valve faster than it lowers the valve, offering a good compromise between performance and longevity. Simply put, asymmetric lobe designs can be utilized to maximize the performance potential while maintaining the durability of the valvetrain.

Since we have already explored the basics of camshafts, we will now attempt to unlock the mysteries surrounding camshaft specifications. Since the camshaft(s) influence (s) when an engine starts making power, when it stops producing power, maximum power output, fuel economy, idle quality, and engine efficiency, it is important to understand camshaft specifications. With this basic understanding, you will be better able to select the camshaft(s) that will keep you ahead of the competition.

At the most basic level, the function of a camshaft is to open and close the engine’s valves. On many applications, a single camshaft controls the opening and closing events of all the valves in an engine. Other applications may implement as many as four camshafts to control the valve events. Regardless of the number of cams, the rules that apply for single camshaft engines also apply to those with multiple camshafts. 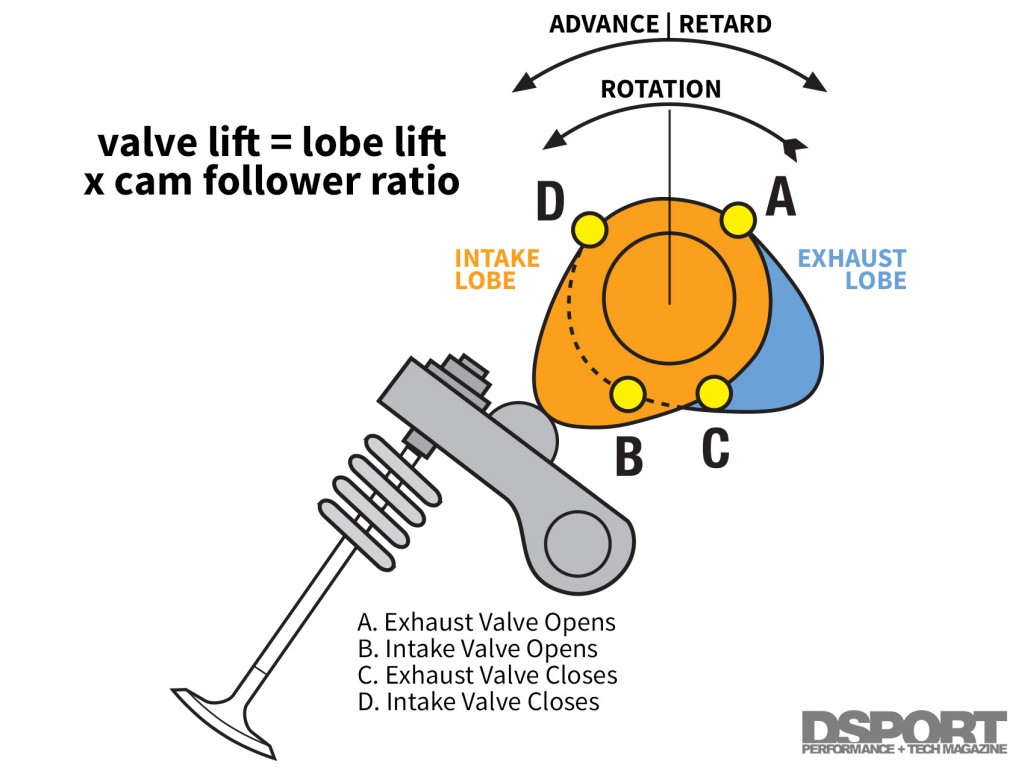 Lift is nothing more than a measurement of the maximum distance the valve is opened. Assuming all other specifications remain the same, choosing a camshaft with more lift will increase the flow of air and fuel into an engine and the flow of exhaust out of an engine. As a result, more power can be made. In many cases, camshafts that have increased lifts over stock specifications and near stock duration will offer increased performance without making measurable sacrifices in “driveability”.

Everything has a limit and cylinder heads are no exception. There is generally a point where airflow no longer increases with an increase in valve lift. Before you order that mega-lift cam, consider the following: when valve lift is dramatically increased, the possibility of valve to-piston contact, coil bind at the valve spring and valvetrain interference is also increased. To avoid bent valves, broken retainers and thin wallets, always use the necessary complementary valvetrain components and check valve-to-piston clearance when recommended by the camshaft manufacturer.

Along with how high a valve is opened, how long it remains open also influences the performance of an engine. If you are trying to fill a glass at the sink, how much you open the faucet or valve, as well as how long you have that valve open will determine how much water fills the glass. The faucet and glass analogy simply demonstrates the measurement of duration. The duration specification of a camshaft is measured in crankshaft degrees. Contrary to what might be expected, there are actually 720-degrees of crankshaft rotation in a single four-stroke cycle of your engine. However, the problem with camshaft duration figures is that different manufacturers measure this duration at different valve lifts. The Brand-A manufacturer might measure duration as from the time the valve is lifted .015 of an inch off its seat until it returns to that same position, while the Brand-C manufacturer might not start measuring until the valve is .050 inch off the seat. The result is that if we had both companies measure the same camshaft, Company-A might measure 306 degrees of duration (measuring at a minimum lift of .015-inch), while Company-C would measure 256 degrees of duration (measuring at .050-inch). In essence we have two completely different measurements for the same camshaft. Luckily, most camshaft manufacturers now provide duration figures at either a minimum lift of 1mm (Japan’s industry standard of measure) or a minimum lift of .050-inch (the traditional U.S. hot rod standard). When duration comparisons between two camshafts are being made, only compare the figures if the measurements have been taken at the same minimum lift.

More lift translates into more power and torque across the powerband in most cases. In general, increased duration will shift the torque and horsepower peak to a higher rpm. All other specifications being the same, increasing duration yields more top-end and mid-range power while sacrificing low-end torque. As a result of the shifting of the powerband upstairs to higher rpms, a longer duration camshaft, when used with the appropriate valvetrain components, will also raise an engine’s redline. One rule of thumb is that every 10-degree increase in duration (measured at 1mm or .050-inch) will shift the torque peak and redline up by 500 RPM. 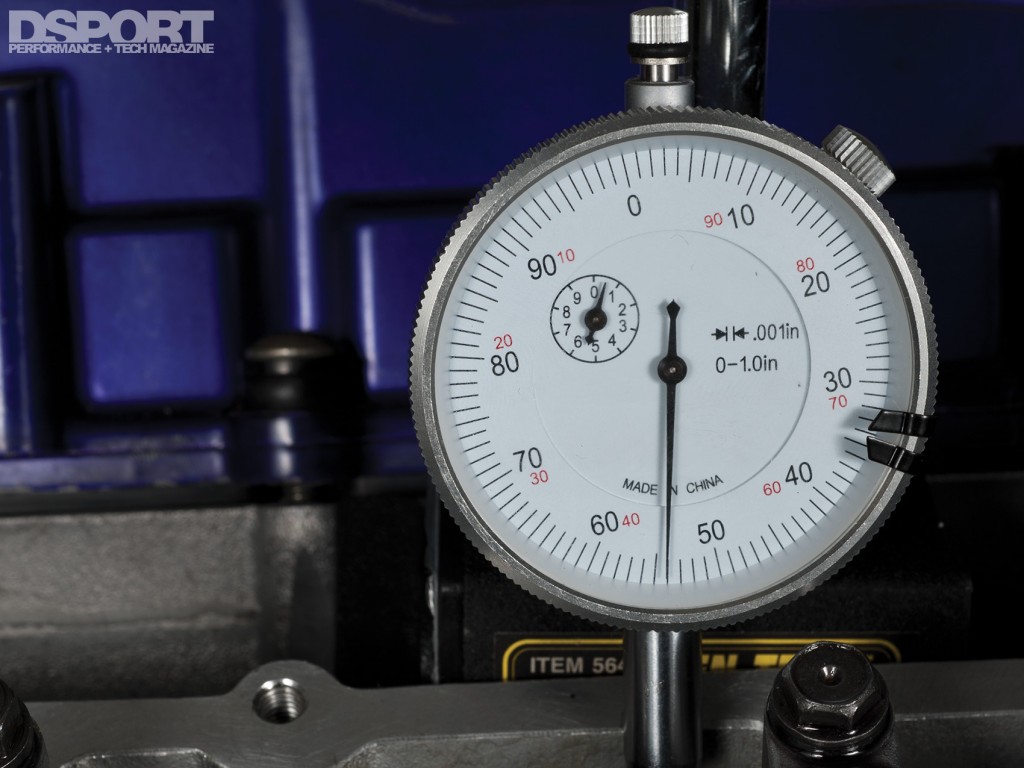 Use a dial indicator to measure valve lift when degreeing cams.