You are at:Home»The Tech»Education»Wraps, Coatings & Treatments | Getting the Extra Edge

Sometimes using the best parts made of the highest quality materials isn’t enough. Fortunately, specialized coatings and treatments can be used to increase performance and reliability from your engine and the components it contains. These new technologies not only allow additional power and torque to be produced but also increase component life. 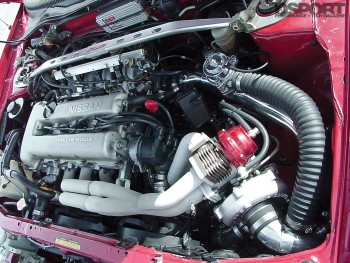 Over the years, DSPORT projects have used ceramic- based header coatings from HPC, Jet-Hot and Swain Technologies. Recently we treated the turbo headers, turbine housings and downpipes on our 1,300- horsepower RB26DETT build to a multi-layer exhaust coating from Swain called White Lightning. Based on our previous experience, White Lightning is very effective at keeping heat in the pipes. Reducing heat loss in the turbo manifold and turbine housing increases the energy available to drive the turbine wheel. As a result, boost response improves. Additionally, thermal-barrier coatings on the headers, downpipe and exhaust housing result in lower engine compartment temperatures. This results in extending the life of wiring, hoses and electronics under the hood, while potentially lowering intake air temperatures.

DSPORT has also used a number of thermal wraps from Cool It Thermo-Tec and DEI over the years. These wraps perform the same function as the specialty exhaust coatings. However, the wraps also provide an additional benefit of staying cooler to the touch in case you come in contact with a wrapped component on a hot engine. Doubling your exhaust heat containment by coating and wrapping exhaust components maximizes the desired effects.

The most obvious place for thermal-barrier coatings inside the engine is on the tops of the pistons but there are other areas that should be considered. Combustion chambers, exhaust ports and valve faces can also reap the benefits of thermal-barrier coatings. In these areas, the coating performs two functions. First, it protects the piston and valve surfaces from many of the effects of high heat. Second, it improves efficiency by helping put the heat of combustion to work, moving the piston instead of heating up the water jacket. 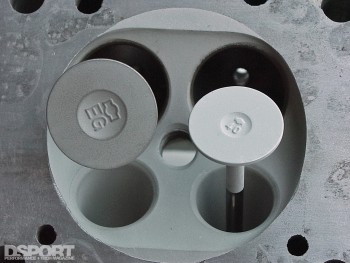 Thermal barriers reduce heat transfer to the head and valvetrain.

Thermal-barrier coatings are made of metallic ceramics. They are the most sophisticated of the coatings and are applied by plasma spray consisting of multiple layers. Plasma spraying is a process where the media is shot at very high temperatures and velocities so some bonding occurs at the molecular level, helping the material to bond better overall. Some piston multi-layer coatings have an insulating layer, a heat conducting layer and a barrier layer. The insulating layer protects the aluminum of the piston. The heat- conducting layer reduces detonation-causing hot spots on the piston crown and improves combustion. Finally, the heat-barrier layer helps keep the heat in the combustion chamber. More inexpensive coating processes involve a single layer of sprayed-on and baked metallic-ceramic coating, similar to the coating found on exhaust headers. This is not as effective as a multi-layer coat but is often better than no coating at all. In any case, it’s a good idea to talk with your coating manufacturer’s technical support staff to make sure you are getting what you want. We have found thermal-barrier coatings to be very effective on forced-induction engines and engines subjected to extended full throttle. These engines are most likely to encounter detonation or dangerously high cylinder temperatures. If you have been around modified engines for a while, you’ve probably seen the effects of slight detonation on some builds. Even with good tuning, slight detonation is hard to avoid completely, especially with low-quality pump gas. This damage can be seen as a rough sandblasted texture found on the outer edges of pistons, usually on the exhaust side and on the edges of the combustion chamber. These signs are a warning that you are one step away from doing some serious engine damage. Thermal coatings usually eliminate this sort of damage, giving the tuner a larger margin for error. It can also allow a tuner to push the engine a little harder by running a little leaner on the fuel, adding a touch more timing advance or a little more boost.

The reduction of wasted heat also gives additional power but this is more difficult to quantify as most people won’t tear down a motor for an A-to-B test to see how much more power coatings give. Some professional teams have done this and have found a 1.0- to-2.0-percent gain in power from the use of thermal-barrier coatings. Although this doesn’t sound like much, this can be a 2-20 horsepower gain on a 100 to 1,000 horsepower engine. Many engine builders have also noted lower water and oil temps and higher turbo-spooling exhaust temps (as much as 300 degrees with no changes in tuning) when using thermal coatings on the engine’s internals. Although thermal coatings are not an instant power adder like turning the boost up a few more pounds or adding a shot of nitrous, they can be thought of as a low cost insurance policy for the engine. Most of the value is not found in the additional power, but rather the greater efficiency and/or reliability from the engine.