Competition motivates. When the contest is between father and son, that atmosphere takes on an entirely new meaning. Doug Perera and his son Anthony love high- performance. After Anthony built a 1,041-horsepower EVO VIII, Doug was motivated to show his son that he could do a little better. Deciding to bring a canon to the gun fight, Doug chose one of the most horsepower-capable platforms to come from Japan, Toyota’s JZA80 Supra Turbo.

Being a lifelong car enthusiast, Doug was no stranger to making horsepower. To take the Toyota Supra into the four-digit horsepower range, Doug sought the help of horsepower experts at Titan Motorsports. The goal was to build a streetable dyno queen that would raise the horsepower record in the Perera family. Ninety-thousand dollars later, a big turbocharger backed with a shot of nitrous produced the contest-winning 1,067 horsepower. 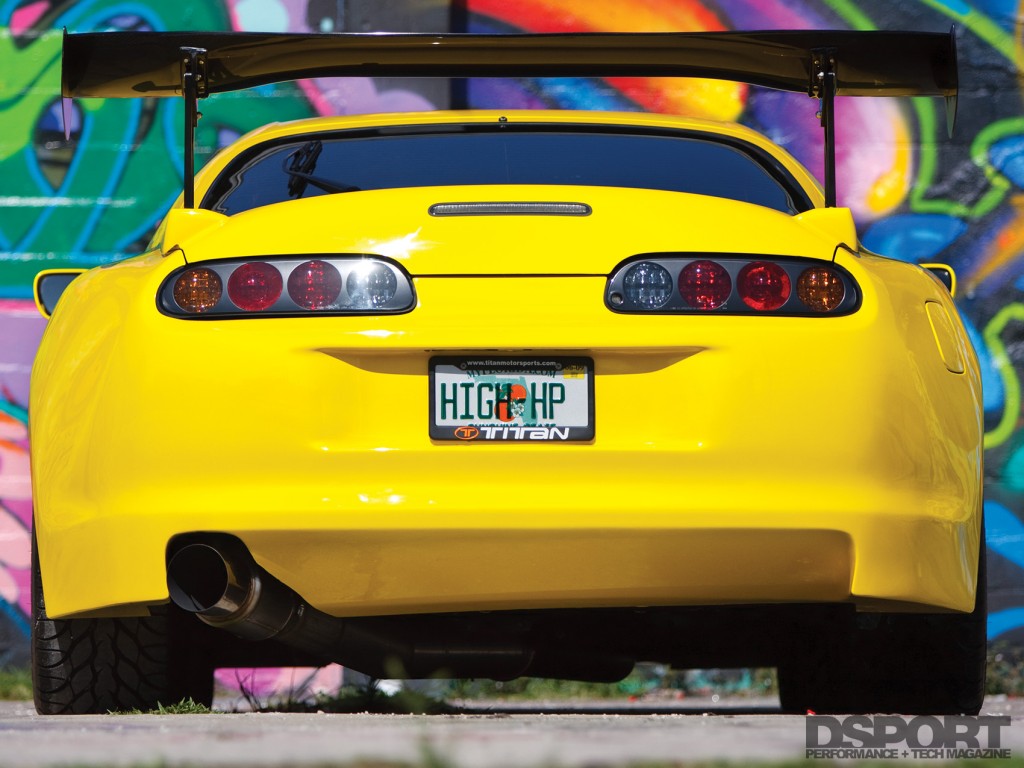 Titan dismantled the factory iron block before overboring the cylinders 1mm and honing them in preparation for the Titan 3.4-liter stroker kit. This stroker kit replaced the factory rotating assembly with 87mm CP pistons, Carrillo connecting rods and a custom billet-steel crankshaft featuring an 8mm longer stroke. This combination of parts results in a displacement increase of 355.5cc, taking displacement up to 3,353cc.

To make the best use of the larger, reinforced shortblock, the cylinder head was replaced with a Titan Motorsports race head. The Titan race head starts as a brand new core that receives custom port work before being filled with a complete Ferrea valvetrain. The 1mm oversized valves with stronger valve springs allow greater airflow while permitting greater engine speeds without valve float. The valvetrain is actuated by higher-lift and longer-duration HKS 272-degree camshafts. The porting, larger valvetrain and bigger cams increase the flow potential of the cylinder head to make best use of the added displacement. 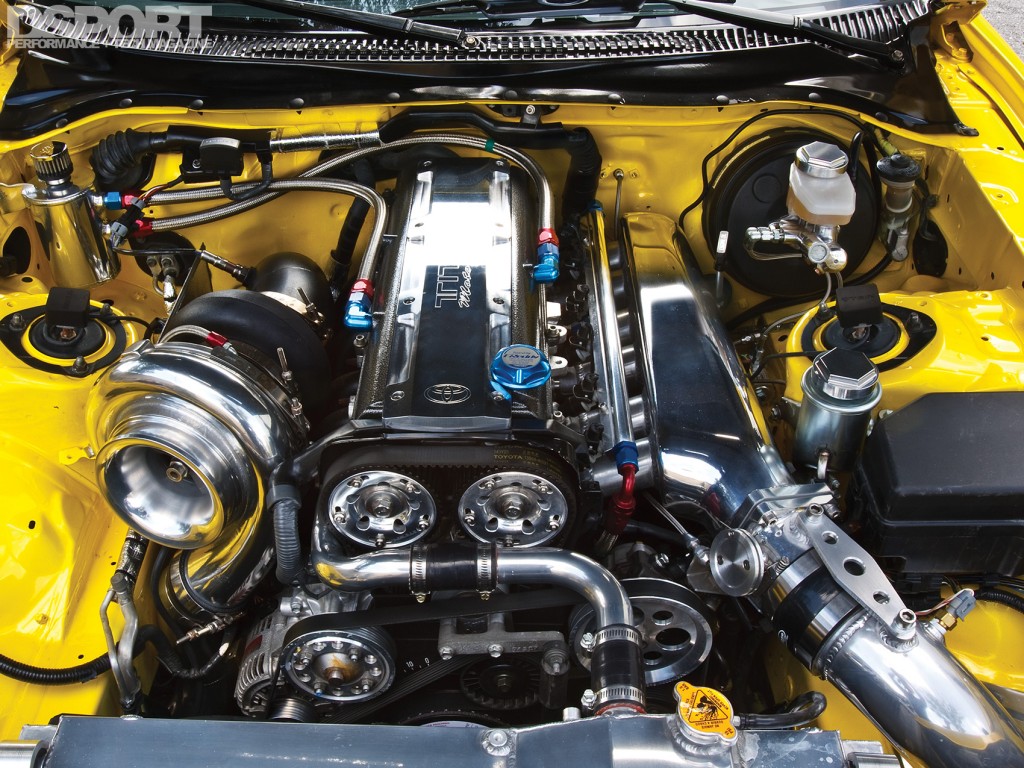 Pump Up The Volume 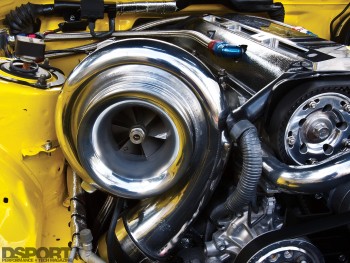 With a target over 1,000 horsepower; a larger turbocharger would be essential. The benefit to the increased displacement is realized when it comes to turbocharger sizing. The increased displacement produces the exhaust gas velocity needed to spin the Garrett GT47R mounted to the Virtual Works Racing (VWR) T6 exhaust manifold. Capable of supporting nearly 1,200 horsepower, the GT47R was the right size for Doug’s horsepower goals. While this would ordinarily be a lag-prone turbocharger, the additional displacement helps to generate boost pressure earlier. To further reduce lag, a Nitrous Express 75-shot nitrous injection system was incorporated. Adding nitrous oxide to a big turbo system significantly improves response, increases mid-range power and improves the shape of the power curve.

Custom piping links the compressor to the GReddy 4-row front-mount intercooler en route to the Accufab 90mm throttle body and VWR intake manifold. The larger throttle body accommodates additional airflow compared to the factory piece and complements the VWR manifold. Featuring a larger plenum and velocity stacks atop each of the runners, this manifold is designed to optimize power while ensuring even and consistent airflow to the individual cylinders.

As the aircharge reaches the intake ports, a six-pack of Titan 1,600 cc/min fuel injectors spray VP Racing C16 race fuel into the air stream. A MoTeC M800 stand-alone system was chosen to control the fuel flow as well as ignition timing.

Ensuring additional volume and consistent fuel pressure to the larger injectors would require a fuel system upgrade. While a variety of options were available, the simple, quiet and cost-effective option was Titan’s triple-pump system. Contained entirely within the factory fuel tank, the Titan system installs seamlessly, affordably and without complexity. Large, external in-line fuel pumps tend to be better suited for dedicated racecars as they require additional plumbing and are noticeably louder than in-tank setups.

Judgement Day for the Toyota Supra

Ready to be tuned, the Supra was strapped down to Titan Motorsports’ Dynojet 248C dynamometer. With boost set to a solid 45 psi, tuner Darin Dichiara adjusted the fuel and ignition tables for optimum horsepower. When tuning was completed, 1,067 horsepower and 739 lb-ft of torque was realized at the wheels. That was just enough to take back the title and prove that father knows best.

Putting down more than three times the amount of horsepower than the Toyota Supra delivered from the factory required driveline improvements. A Tilton Engineering carbon triple-disc clutch transfers power from the engine to the factory Getrag transmission. The transmission spins a Titan driveshaft that turns a TRD limited-slip differential. The TRD unit splits the power between the PIAA Rozza wheels mounted with BFGoodrich g-Force T/A KDW tires. 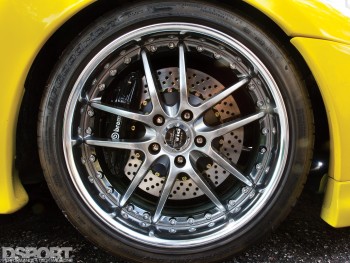 With his main objective achieved, Doug then began to evaluate the remaining elements in need of attention. Arresting a 3,800 pound vehicle equipped with over 1,000 horsepower requires additional braking capacity. Brembo six-piston calipers and 14.1-inch two-piece rotors take their place under the front fenders, while four-piston units with 13.2-inch rotors reside in the rear. Employing larger, multi-piston calipers distributes the pistons load more equally across the larger pads. This results in more consistent braking an better pad wear. The rotor size increases the heat capacity of the braking system, and, when a larger pad is employed, can also increase the area of the friction surface. The two-piece rotor design reduces unsprung weight and allows the rotor to expand and contract between heat cycles, minimizing the chance for warping. Stainless-braided lines ensure excellent brake response and pedal feedback to the driver. 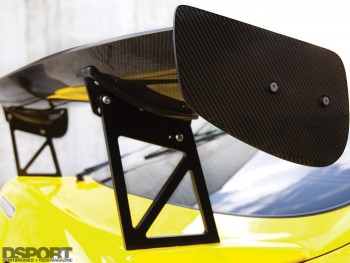 To complement the JZA80’s performance, a TRD wide-body kit now adds to the Supra’s already aggressive stance. TEIN Flex coilovers bring the chassis closer to the ground to take advantage of the improved aerodynamics. Fitted to the hatch-lid is an APR Performance carbon-fiber GT wing to add downforce over the drive wheels. Inside the cabin, a four-point roll bar stiffens the chassis while Sparco Milano seats and four-point harnesses secure the occupants into place.

Gladiators in battle rarely come out unscathed. Fortunately, when it’s a friendly competition between father and son, the competitors aren’t looking for blood. With 1,067 horsepower, Doug squeezed past his son Anthony on this round, but the young Perera is far from “over it.” He’s definitely going to keep his father on top of his game. In the mean time, dad’s going to enjoy wearing the championship belt. 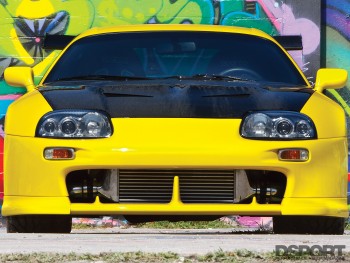 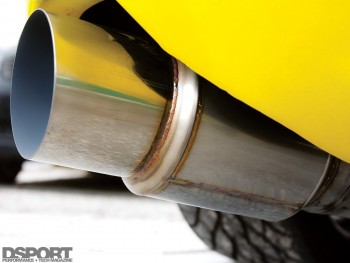