The thought of lofty horsepower figures come to mind whenever the words “Toyota Supra” are mentioned. The recipe is simple: a built bottom end, a giant turbo and a capable fuel system can easily push the power of the 2JZ-GTE into the 1,000-plus whp range. However those 1,000-plus whp engines are generally found on Supras set up for drag racing, top-speed or dyno contests. Trying to take one of those lag-monster setups around a road course is a fruitless endeavor. When turns and switchbacks are a part of the dialog, a fat and flat powerband is essential. That was just one ingredient in the recipe for this track Supra.

For Joshua Barnes, the horsepower bug bit early, taking him and his 1994 Toyota Supra through an evolution of changes. The incredible horsepower potential of the 2JZ engine made the progressive buildup toward more horsepower unavoidable. The first iteration of the build relied upon a GReddy T78 turbocharger to put power figures at the 800 horsepower marker. Generating excellent street and drag power made the Supra addictively fun to drive as fast as possible.

A Step Back To Leap Ahead 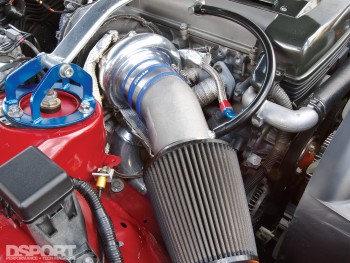 With a new focus in mind, Barnes began to rebuild the Supra for all-out circuit competition. Starting under the hood, the 2JZ went through an evolution. Barnes fell in love with the Supra in part because of the nearly inde- structible 2JZ-GTE engine. Leaving the longblock in factory form, it was time to find a turbocharger better suited for the road course. Replacing the big-power T78 turbocharger was a necessary one to gain a broader power curve for the track. The track setup consists of a GReddy stainless-steel exhaust manifold mated to a Garrett GT3582R ball-bearing turbocharger. The GReddy manifold received a Swain Tech thermal-barrier coating to serve several benefits to performance. By insulating the high-enthalpy exhaust gases inside the manifold, under-hood temperatures are reduced and exhaust gas energy is increased, resulting in improved turbocharger response. Boost Logic’s turbo blanket insulates the turbine housing to further promote responsive spool up and reduces engine bay temperatures. The gases then leave the turbine housing and flow through a custom downpipe and GReddy titanium exhaust system. On the cool side of the turbocharger, the compressor draws air through a Titan Motorsports (Titan) air intake system and forces the air through custom intercooler piping en route to the HKS GT-R front-mount intercooler. Once chilled, the air flows to the factory intake manifold and throttle body. 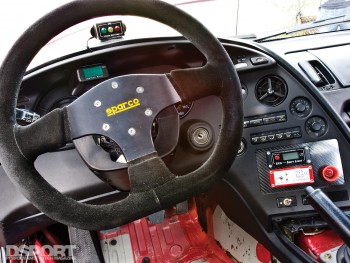 Turbo upgrades require additional fuel and tuning beyond the capabilities of the factory equipment. Fuel starvation is one of the fastest ways to destroy an engine and improving the fuel system allows the engine to perform optimally while insuring against lean air-to-fuel ratios. On this Supra, the improvements start in the fuel tank. A Titan triple-pump fuel delivery system replaced the single factory fuel pump in the tank. This system is comprised of three 255-lph Walbro fuel pumps that direct fuel to the Titan fuel rail. The rail then distributes fuel to a six-pack of Titan 720 cc/min fuel injectors. To regulate the injector duty cycle, a plug-and-play AEM Engine Management System (EMS) replaced the factory ECU to enable boundless tuning possibilities to the tuning wizards at Titan Motorsports. With an EMS-controlled AEM boost-control solenoid regulating boost pressure to 22 psi, Titan got to work tuning the Supra for maximum response. Strapped to the rollers of a Dynojet dynamometer, the Supra generated an ultra-responsive power curve with 560 peak horsepower and 470 lb-ft of torque. Since the 2JZ now generates more power and must endure the rigors of the track, driveline improvements were a must. A Tilton triple-disc carbon-carbon clutch and lightened flywheel replaced the factory clutch to transfer the power from the crankshaft to the factory 6-speed Getrag transmission. The power is then divided between the rear wheels by way of a TRD limited-slip differential. 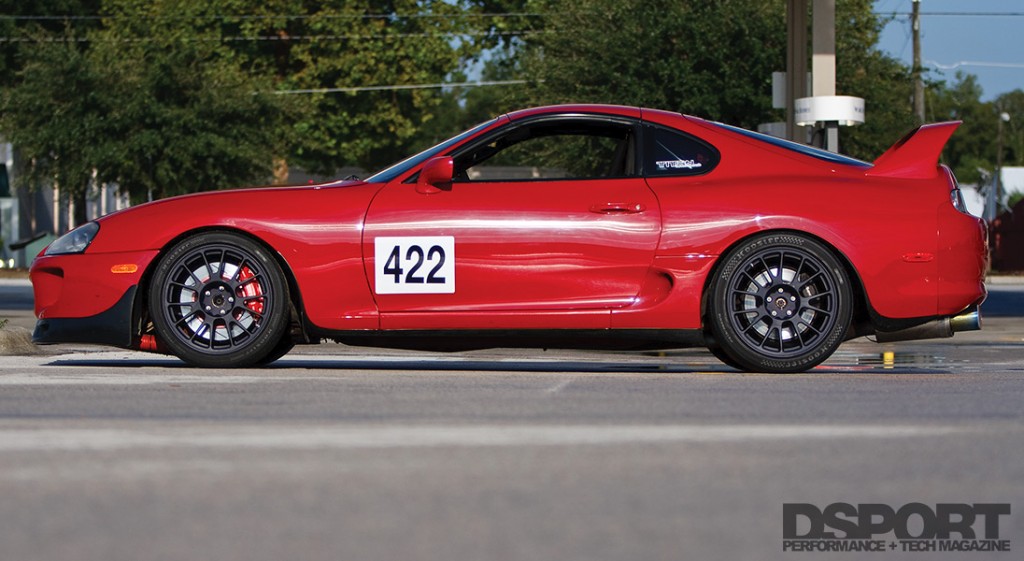