A strange thing happens to one’s mind and soul after driving a mega-horsepower car on the streets. The mind rationalizes the need for the power while the soul feeds on the performance. For Todd Allen, dominating the streets has become the norm. Recognized by some for his 1,300 horsepower twin-turbocharged Lamborghini Gallardo or his 1,307 horsepower JZA80 Supra Turbo, Todd has gained a reputation for well-executed, big-power street machines.

When a friend sought Todd’s advice on building up a serious street machine, Todd advised his friend that the Mitsubishi Evolution would be the ideal platform for his budget. The EVO’s all-wheel-drive configuration and stout 4G63 engine would now only allow for serious power production, it would also offer a serious traction advantage. Todd did such a great job selling the idea of building up an EVO to his friend, that he talked himself into getting one as well.

Todd purchased this Evolution VIII already equipped with a built almost-500-whp powerplant. At first, the plan was to just use the vehicle as a daily driver. Soon, it became apparent that going from well over 1,000 horsepower to under 500 was just too big of a step down. Seeking help from his usual list of suspects, Todd put another car under the blade. 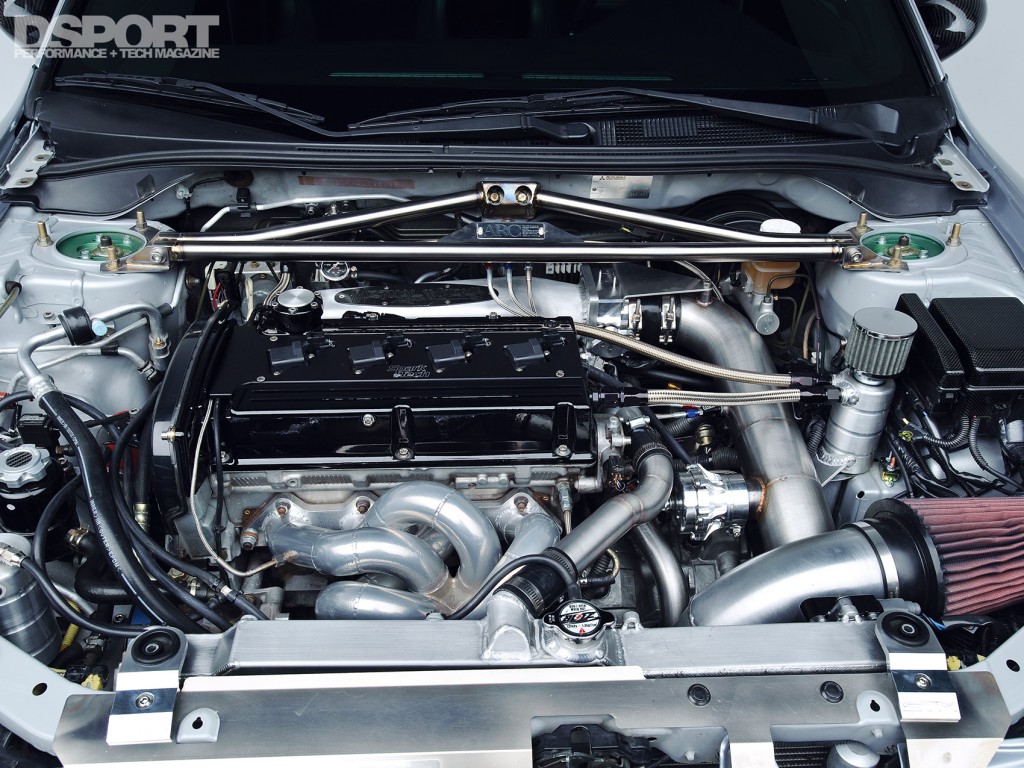 Not letting anything get in the way of big power, Todd had the engine pulled and delivered to LMS Machine Shop to be reworked. He discovered that the engine had already been sleeved once before, which for an iron block means that some serious damage had been done in the past. Taking no chances, Todd asked LMS to resleeve the block with a fresh set from Darton International. These sleeves were bored and honed to the factory 85mm spec. Since significantly greater horsepower targets were expected of this 4G63 engine, tremendous cylinder pressures would be involved.

HANDLING MORE THAN THREE TIMES THE HORSEPOWER THAN THIS MITSUBISHI MADE IN STOCK TRIM WOULD REQUIRE SIGNIFICANT IMPROVEMENT BEYOND THE CRANKSHAFT.
To secure the crank, LMS fitted a set of Pro-Gram Engineering billet main caps and ARP main studs . After the machining was complete, LMS filled the cylinders with forged-aluminum CP Pistons linked to the Crower 102mm stroker crankshaft by way of Crower Pro-Series billet connecting rods.

Up top, the head was ported and polished before oversized valves and improved vavetrain were put in place. Todd selected Supertech nitride-coated valves along with Ferrea dual valve springs, titanium retainers, locators and locks. The nitride coating on the valves minimizes valve friction while the springs and lightweight retainers keep the valves from “floating” at higher engine speeds. A set of HKS 280-degree camshafts orchestrate the valve events with increased lift and duration. The improvements made to the top-end allow for quicker turbo response and more power to be generated at a given boost level.

Before joining the head to the block, the sleeves received stainless-steel o-rings to assist the head gasket in sealing the combustion chambers and the tops of the cylinders. High-strength ARP L19 head studs provide the clamping force necessary to keep the gasket from failing at the extreme cylinder pressures associated when a little engine makes big power.

A Virtual Works Racing (VWR) equal-length exhaust manifold collects spent gasses and channels them to the turbine inlet of the Precision Turbo & Engine (PT&E) 6262 turbocharger. The PT&E 6262 features a billet compressor wheel supported by dual ball bearings. This setup was designed to provide quick spool up along with the air volume and boost pressure needed to make big power without sacrificing too much response. Boost pressure is regulated by a TiAL Sport 44mm wastegate and a GReddy Type-S electronic boost controller. A VWR downpipe and GReddy Ti-C exhaust system route gasses to the rear and out to the atmosphere. 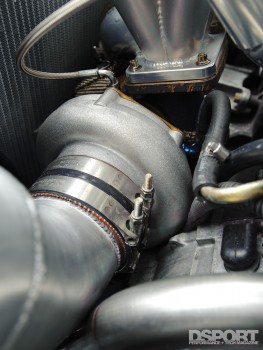 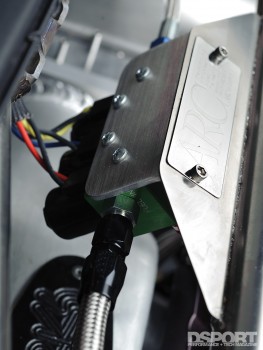 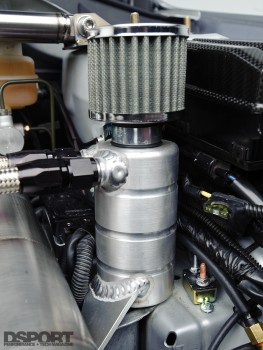 From the cool side, compressed air flows through custom piping and releases the heat generated by the pressure increase at the ETS front-mount intercooler. Once the heat is released at the intercooler, the denser aircharge flows to the Boomba 75mm billet-aluminum throttle body and VWR aluminum intake manifold. As the aircharge is distributed to the runners leading to the intake ports, 2,000 cc/min Bosch fuel injectors spray VP Racing Q16 racing fuel into the airstream leading to the combustion chambers. To ignite the air and fuel mixture completely, the 4G63 relies on Bosch Iridium spark plugs. The plugs receive ignition energy from a Spark Tech CDI Pro coil-on-plug ignition system. 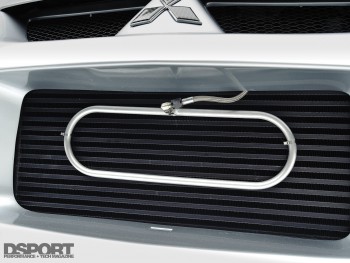 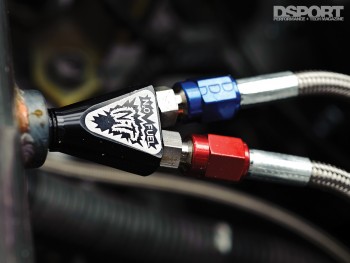 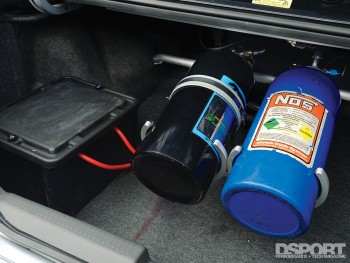 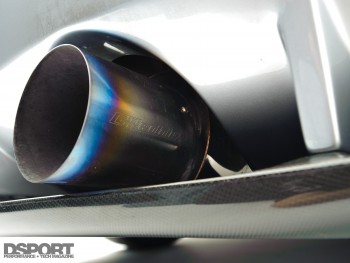