No, it’s not an actual taxi cab. it isn’t available for rides through Uber® or Lyft®, either. However, you can expect to see this yellow and black-themed, 813-horsepower Mitsubishi EVO VIII making single-digit passes down the quarter mile and representing at local car shows near Cheektowaga, New York. Text and Photos by Richard Fong 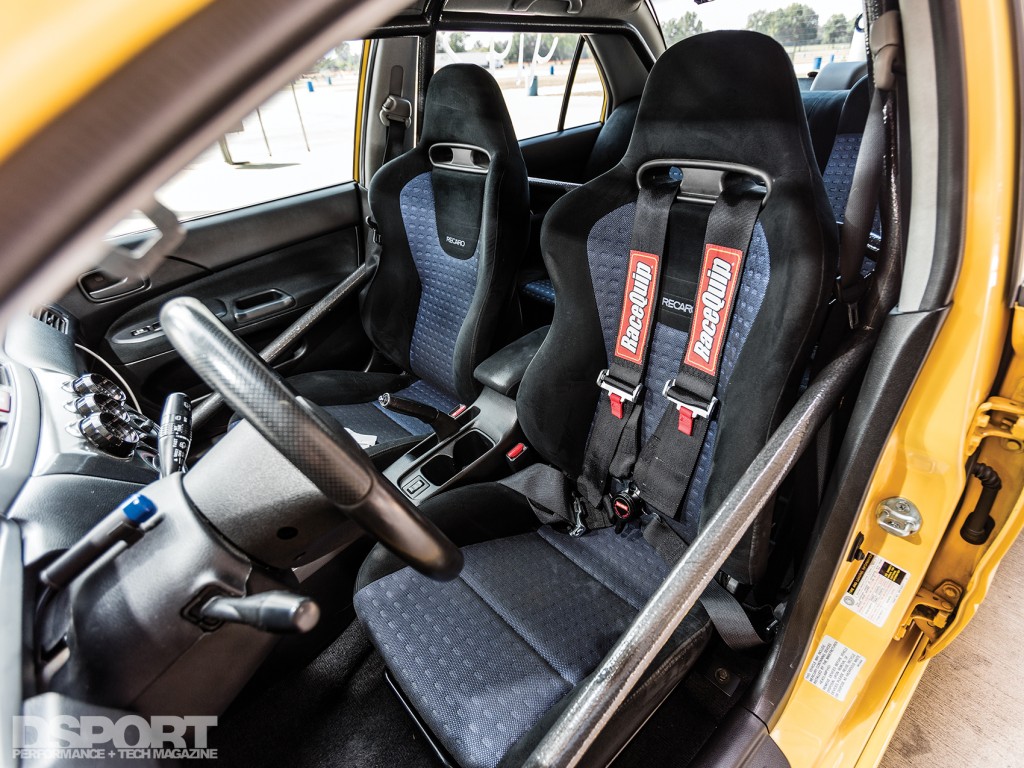 The tuning scene drew in Paul Wlosinski just as he finished high school. Like many young enthusiasts, the EVO VIII caught his attention because of its turbocharged performance potential, a big factory wing, all-wheel drive and its flashy yellow paint job. “My original goal was to simply build this car into a competent streetcar. I just bolted in a GT35R turbo kit, making the appropriate upgrades to the fuel, engine management and driveline to put down 500 whp and then just drove and enjoyed the car. It was really rewarding to do much of the work myself and to experience the performance improvements first hand. I thought I had found contentment until I met Emery Kapral and the crew over at STM Tuned.” 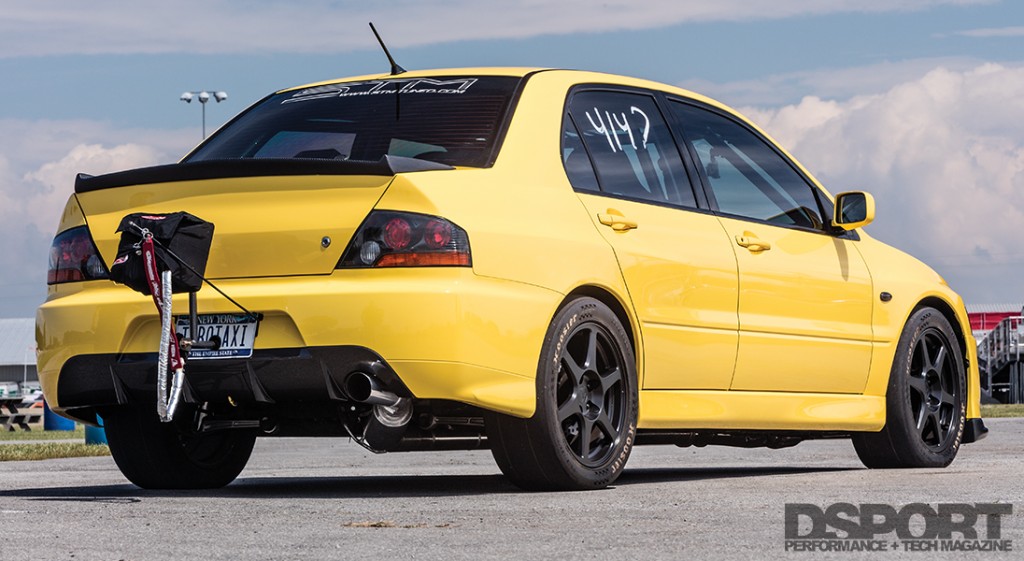 The Ricer and RS Legacy

Paul learned of the powerful Mitsubishis that STM had built over the years and was captivated by the shop’s project cars, “Ricer” and “RS”, and their accomplishments. He wanted to emulate the output and performance of those machines and to uphold the STM reputation in his own EVO VIII. This goal included big horsepower, quick passes down the quarter mile and a clean presentation. 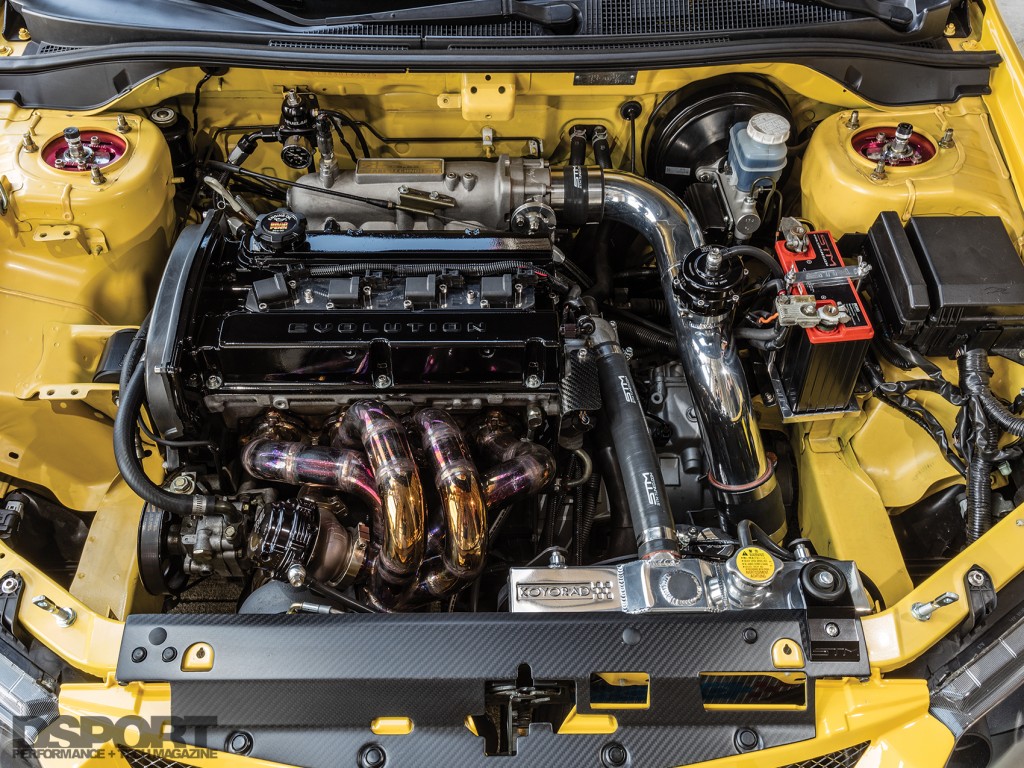 Following in the footsteps of STM’s projects opens the floodgates to a plethora of work. Fortunately, the ingredients and the formula had been track proven. The 4G63 engine took a trip to Ohio to be reworked by David Buschur at Buschur Racing. David disassembled the block and applied a light hone to the bores in preparation for higher compression 10.0:1 Buschur Racing-spec pistons. Lightweight GRP aluminum rods make the connection between the pistons and the factory crankshaft to complete the shortblock assembly. With the block finished, David reworked the cylinder head for improved volumetric efficiency. He then installed a complete Buschur Racing valvetrain composed of +0.5mm valves, springs and titanium retainers. ARP L19 head studs threaded into the block provide the clamping force to secure the built cylinder head to the block, to ensure a proper seal and to contain the higher cylinder pressures that result from higher compression and boost pressures. To provide more lift and a longer duration for the Buschur Racing valvetrain, a pair of STM 650 camshafts replaced the factory bumpsticks atop the head.

As David worked on the engine, one of STM’s fabricators, Austin Leatzaw, got to work on the CT9A chassis. Anticipating quick trips down the strip, he welded in a custom 10-point roll cage suitable for single-digit passes. In the trunk, a parachute mount ties in with the shock towers to help slow the chassis down after making 150 mph+ trips down the drag strip. Up front, the engine bay was cleaned up in preparation for the 4G63’s return. Harnesses were rerouted, the air conditioner and condenser were removed, and an STM power steering relocation kit lent to the tidy appearance of the engine bay. 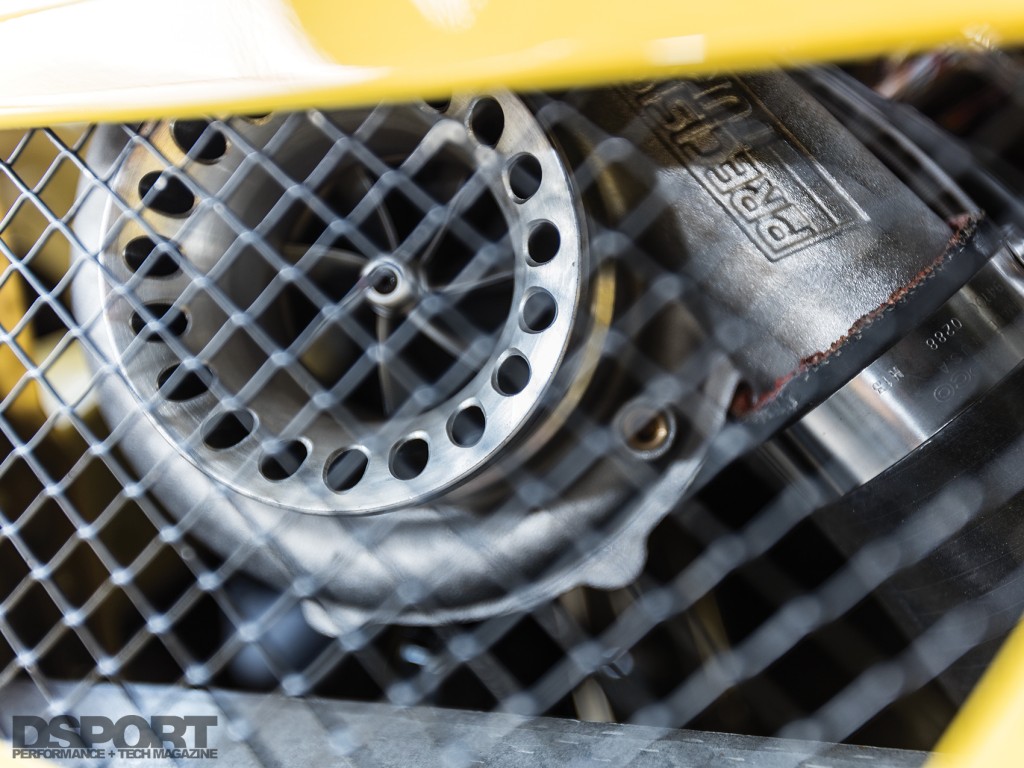 Once the engine was back on its mounts, Austin bolted an STM forward-facing exhaust manifold to the head, directing high enthalpy gasses into the turbine inlet of a Precision Turbo & Engine PT6466 turbocharger. The turbo’s compressor inlet points forward through the bumper grill to ingest and compress cool ambient air. An STM custom half-width Koyo radiator shared the space behind the bumper next to the turbocharger. Once compressed, custom piping channels the air through an STM front-mount intercooler to exchange heat with the atmosphere. The chilled air then makes its way through a Full Blown 70mm throttle body for distribution to the intake ports by way of an STM-ported Skunk2 Racing intake manifold. 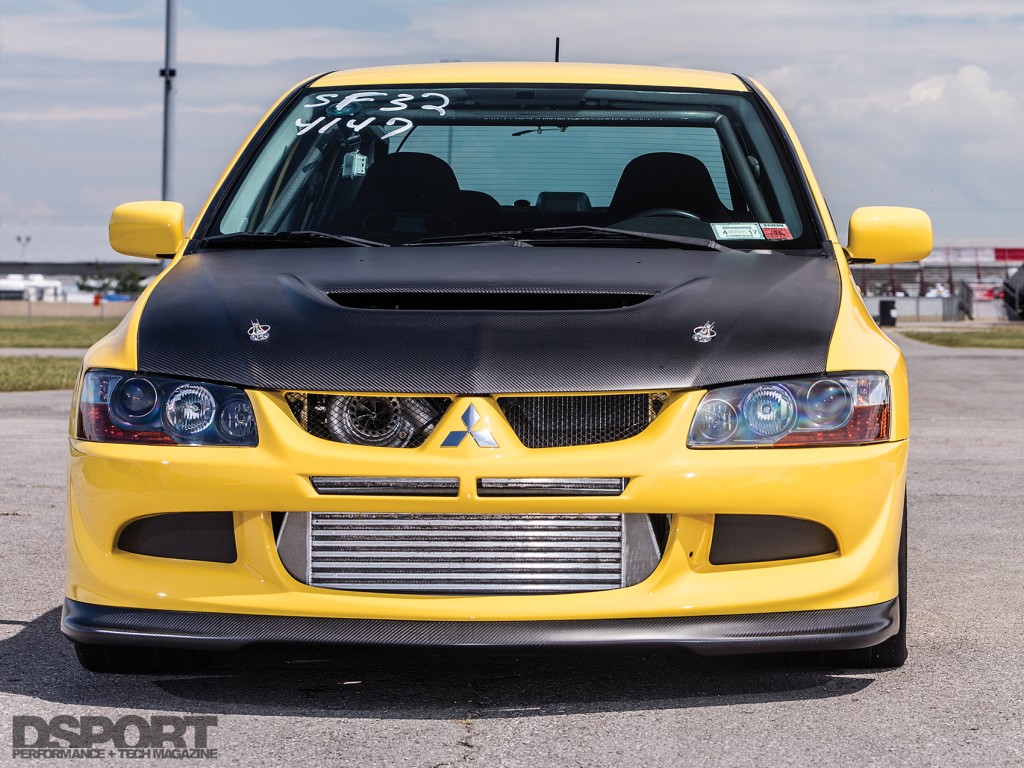 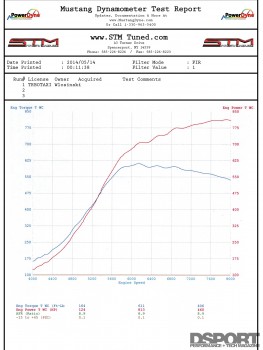 As the compressed air rushes toward the intake ports, a quartet of Fuel Injector Clinic 2,150cc/min injectors spray atomized E85 into the cylinders. An STM triple pump hanger equipped with a trio of ASNU 330-lph fuel pumps ensure a steady flow of fuel to the rail. With an AEM V2 engine management system regulating the flow of fuel and the spark timing, Emery refined the tables for a peak boost pressure of 53psi. Peak horsepower checked in at 813 with peak torque coming in at 610 lb-ft as measured on STM’s Mustang AWD Dynamometer. By comparison to a stock EVO VIII making 210 horsepower on this dyno, this is an incredible 287-percent increase in output. 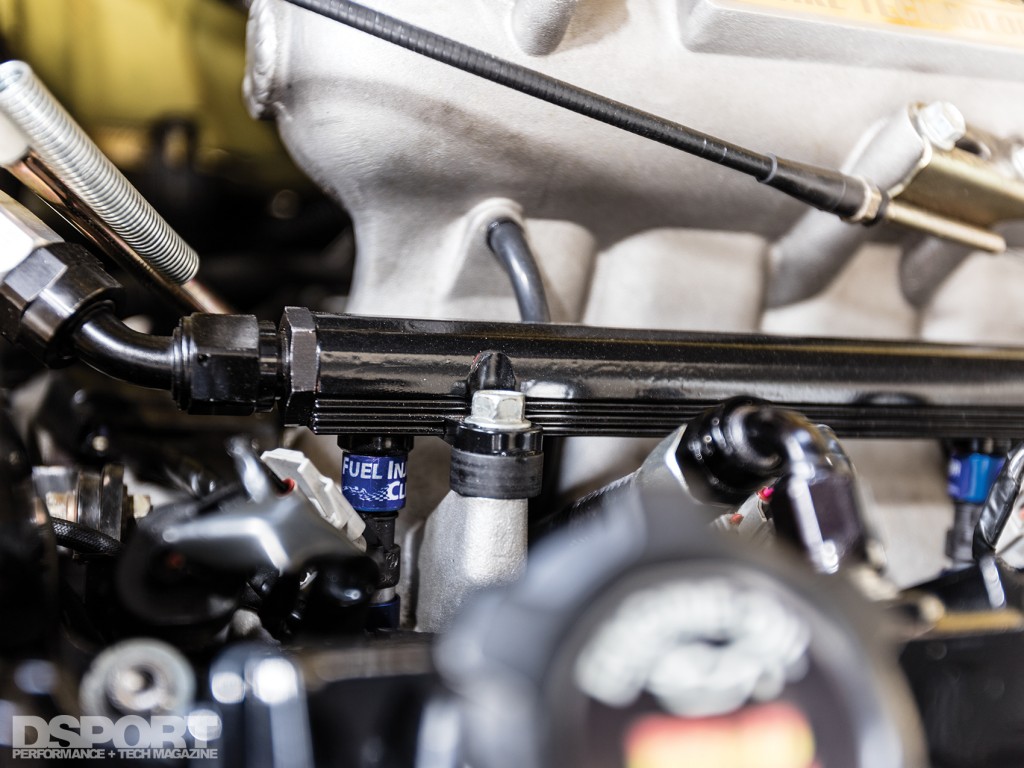 As durable as the factory driveline had been designed to be, it simply wasn’t meant to handle the more-than-800 horsepower being produced by the engine. At the crankshaft, the factory clutch got the boot in favor of a Quartermaster 8-leg racing clutch. The clutch transfers torque from the crankshaft to the input shaft of a Sheptrans-built 4-speed dog engagement transmission. Torque distributes from the transmission through the driveline and then splits between each of the Hoosier drag radial-mounted factory EVO VIII Enkei wheels by way of an EVO RS front LSD and the factory rear differential. 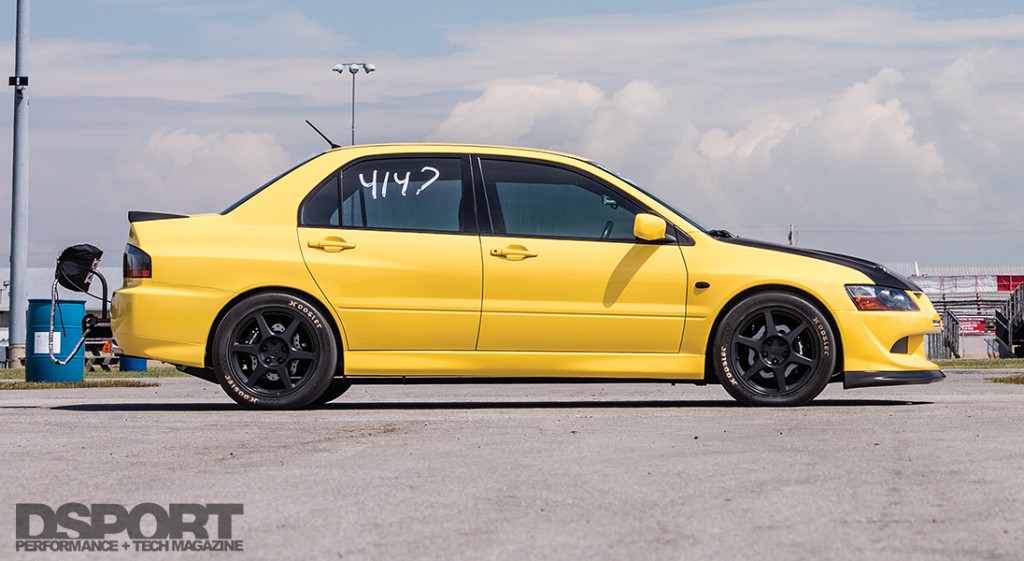 The sleeper style suited Paul for a short while before he felt compelled to make subtle changes to the exterior. Although the EVO was yellow, it wasn’t always referred to as the “Turbo Taxi” as it is today. The name didn’t actually stick until Paul made aesthetic changes that added a black theme to the yellow exterior. In an effort to further reduce the weight of the chassis, a carbon-fiber hood replaced the factory sheet metal up front. The trunk lid also lost a few pounds with the deletion of the factory wing and the placement of a Rexpeed carbon-fiber trunk spoiler. Add to this a set of factory Enkei wheels in a hue of black and the EVO suddenly seems to scream out “taxi cab!” 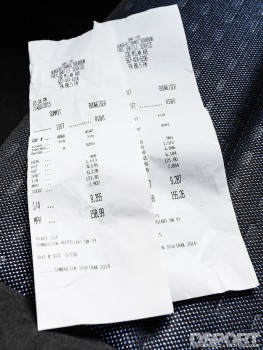 Even with more than 800 horsepower on tap, Paul finds great satisfaction that his EVO represents an ideal street car build. He stated that with full interior and car audio, it is comfortable on streets, highways and local roads. What made the effort even more rewarding was representing with STM at the 2015 Shootout in Ohio. Arguably the largest Mitsubishi racing and motorsports event in the world, Paul made his personal best pass on the quarter mile in front of an audience of more than 3,000 spectators. When he went to collect his time slip, he saw that he had run a 9.2-second pass at 163 mph. At the conclusion of the weekend, he finished runner up in the Street 32 class.

While this build represents Paul’s ideal street car, it almost didn’t get finished. Paul explained, “There are ups and downs with just about any project, and at one point I almost sold the car. I had just dropped in a built block when the oil pump failed after only 200 miles. It wiped out half the valves and spun a bearing in the process. I was so fed up that I put the car up for sale, but ended up taking down the ad and keeping it. I’m glad I did.” He is now beginning the next phase of his EVO’s progression. The car is returning to STM and going back under the blade. The plan is to Hard Bloc the engine before fitting it with a custom T4 turbo kit and a Precision Turbo & Engine PT6870 turbocharger. His ultimate goal is to break into the 8-second realm on drag tires. With the 2016 Shootout quickly approaching, the Turbo Taxi has no time to take Paul for a ride. 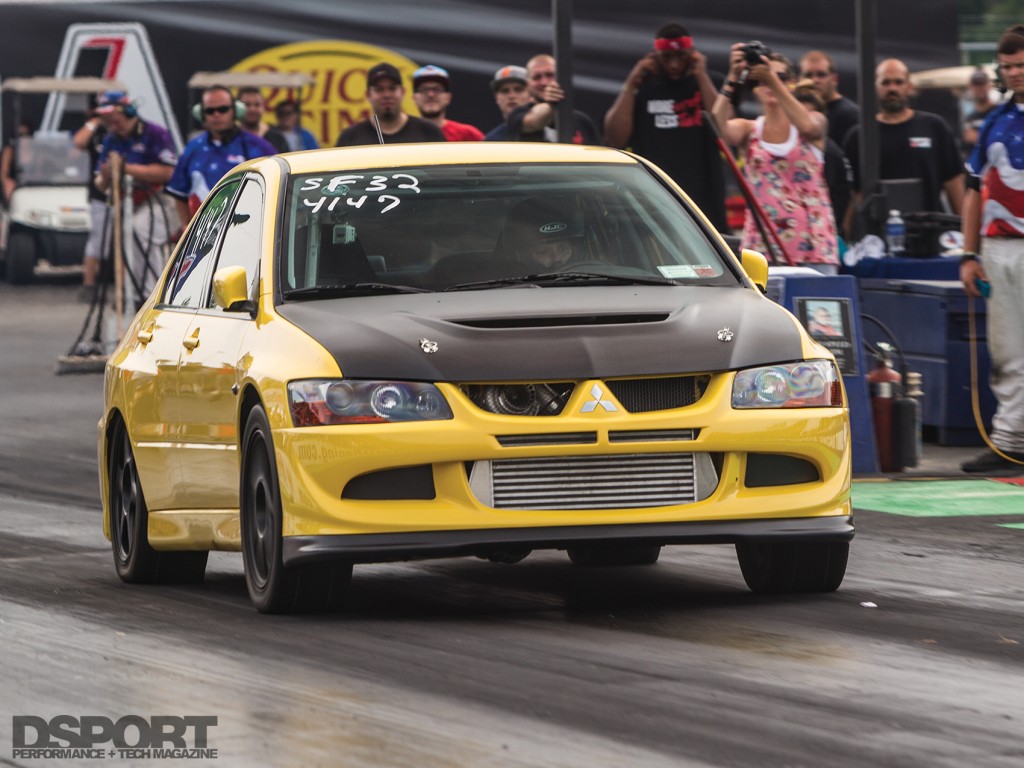