You don’t know what you’re missing out on in overseas markets. In the early 1990s, many enthusiasts had never heard of the GT-R, until mainstream and enthusiast publications began featuring it. The fascination with the Nissan Skyline GT-R gained even more momentum once the (now defunct) Motorex Corporation started importing them legally to the USA for a short time from the late 90s to the early 2000s. DSPORT’s publisher, Michael Ferrara, was among the first to buy one and his R33 GT-R became the flagship project car for the magazine and an inspiration to JDM performance fanatics. Text and Photos by Richard Fong 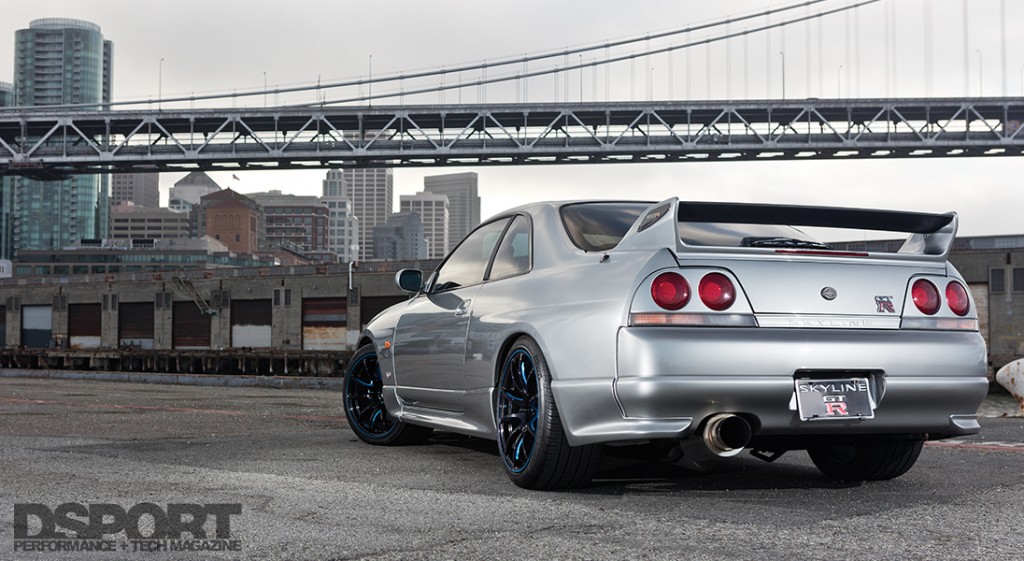 Digging Up a Gem

When Craig D. saw the GT-R in the pages of DSPORT, he became an instant fan, putting the R33 at the top of his want list. Unfortunately, the number of Skylines properly federalized were far and few between. This made Craig’s search an even more challenging one. His perseverance eventually paid off in 2010 when he became the fourth owner of this fully federalized and street legal Motorex R33 Skyline GT-R. 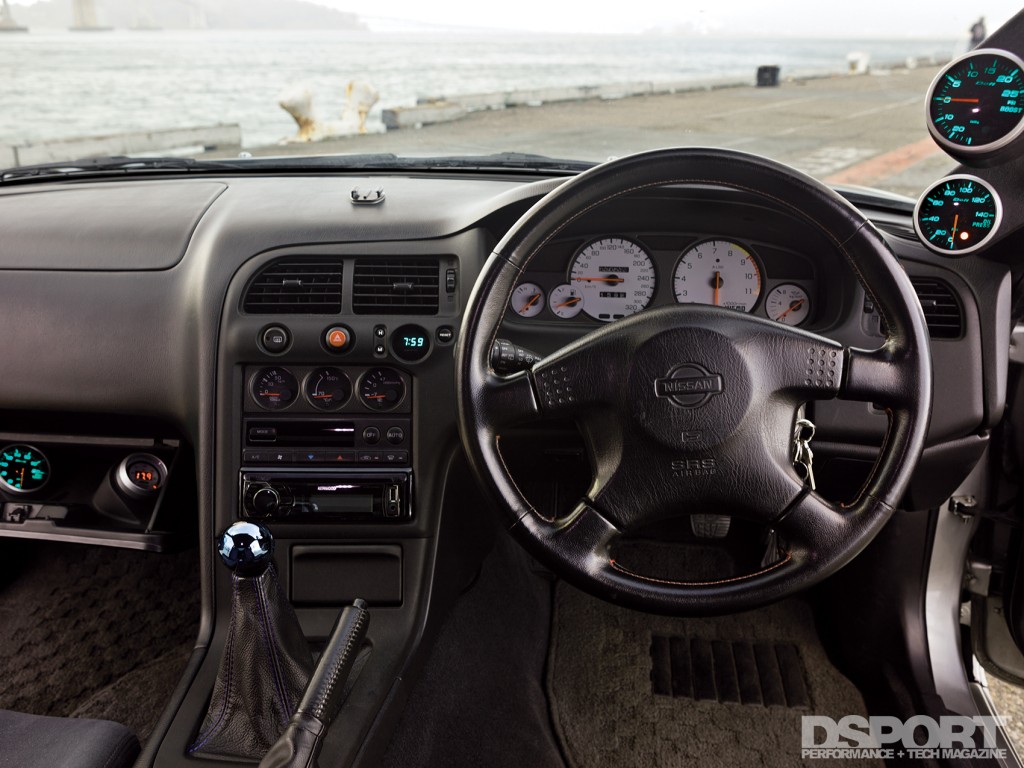 Years of tuning and development in the Japanese car scene have proven the GT-R’s performance potential. This fact is further characterized by the amount of support the aftermarket, giving owners plenty of options to choose from. Since Craig had followed the DSPORT R33 GT-R project from the beginning, he made use of this knowledge base to pave the path of his own build. Aiming to double his horsepower output, he began his quest for more performance. 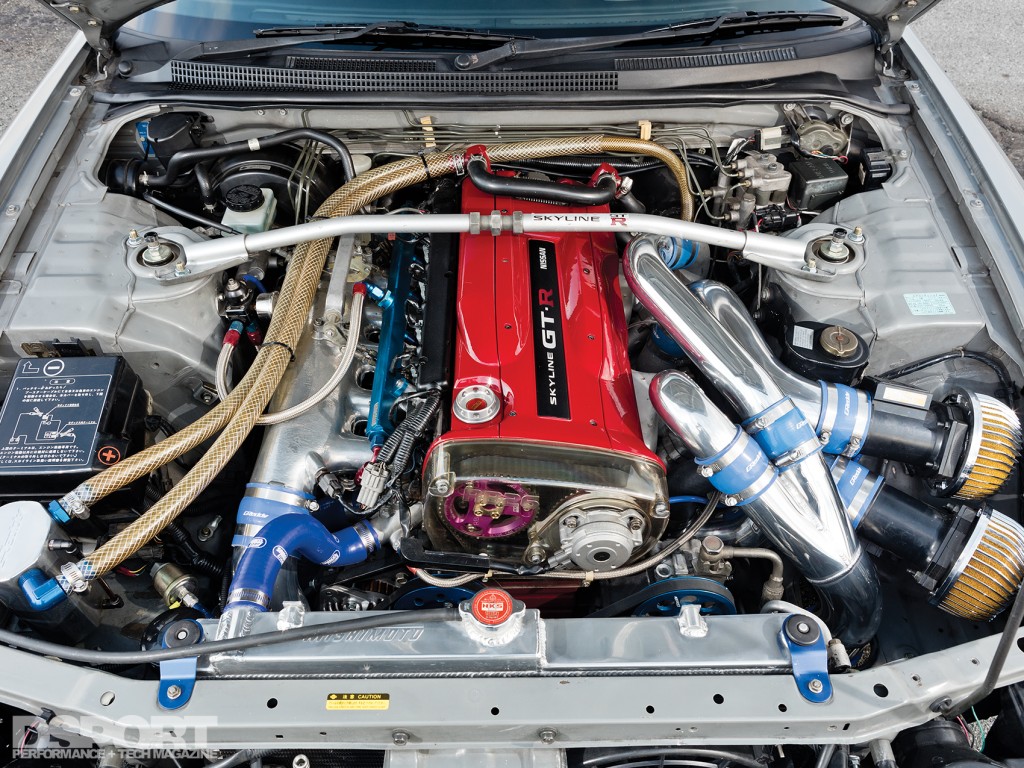 Sourced From a Swap

In order to mitigate downtime, Craig sourced another engine to swap into his GT-R. The freshly-constructed RB26 engine he purchased was originally going to be swapped into a 240SX. It came fortified with 8.5-to-1 compression CP Pistons and Manley Turbo Tuff connecting rods. The cylinder head featured a complete TOMEI Powered valvetrain actuated by TOMEI’s PONCAM Type B camshafts. The GT-R then took a trip to FFTEC in Hayward, California to be calibrated by its resident tuner, Sean Burgess. To start, Burgess began the break-in process on FFTEC’s Mustang Dynamometer. Once he was satisfied that the rings were seated, he began dialing up the boost and making adjustments to the tables. Sadly, this engine only enjoyed a short life beyond break in. The engine reached a humble 500 horsepower before a heartbreaking sound started coming from the block. It was the all too familiar sound of rod knock.

The cause of the rod knock traced back to a common oversight. The shop that powdercoated the valve covers didn’t clean out the sandblast media used to remove the factory finish from behind the baffle plates. Once the oil circulated through the valve covers, the trapped media got into the sump, oil galleys, bearings and everywhere else requiring lubricant. The result was spun bearings, characterized by the rod knock that could be easily heard. This damage forced another engine build. Craig commented, “This was an unbelievable and costly mistake. Everything suffered damage, from the crankshaft, rotating assembly and oil pump all the way up to the cams, oil cooler and valvetrain. A few hundred dollars worth of vanity turned into several thousand in repairs. This was by far the lowest of lows with this build.” 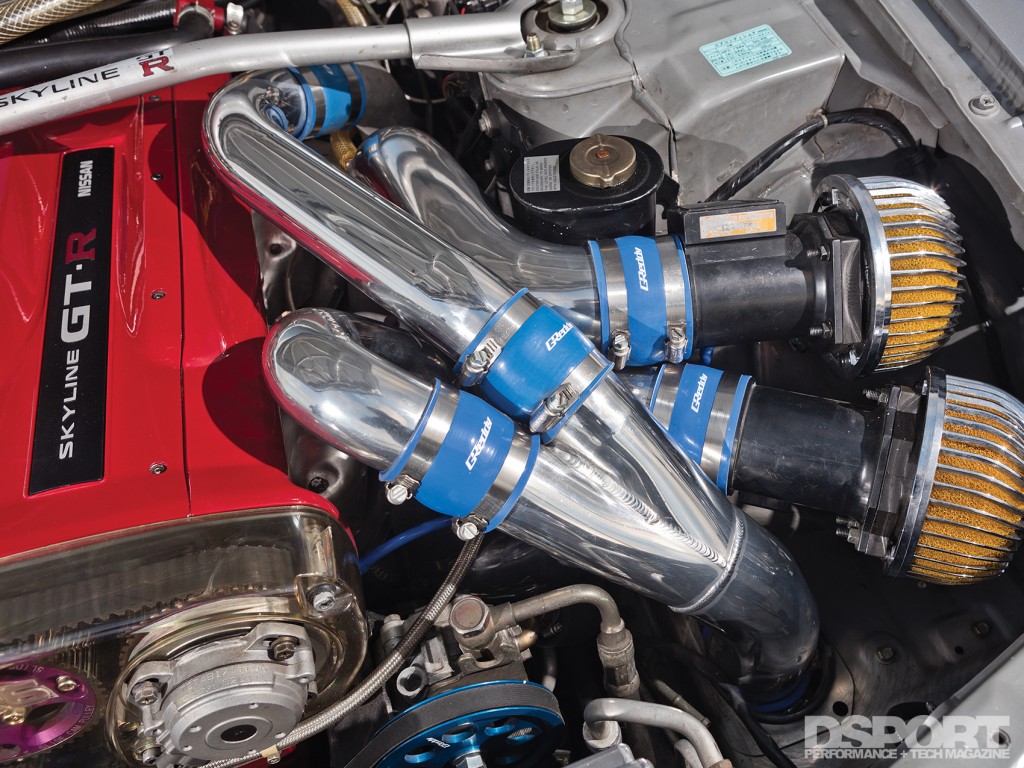 Craig ended up trashing his turbochargers, oil cooler cores, the lines and other irreparably contaminated or damaged parts before work began on the RB26 engine. After a thorough cleaning, the bores increased by 0.5mm before a fresh set of CP pistons filled the cylinders. Manley Turbo Tuff connecting rods make the connection between the pistons and the factory crankshaft, completing the rotating assembly. The cylinder head also went through a reconstruction process, with fresh seals and new TOMEI Powered valves, springs and titanium retainers. After finishing the longblock build, Craig looked for a pair of stock replacement turbochargers to provide a balance of response and increased output. He decided on a pair of Garrett GT2860R turbochargers, which were bolted up to the factory exhaust manifolds. The Garrett turbos feed compressed air into a GReddy front-mount intercooler. As the heat is drawn out of the air charge, the cooler, denser air makes its way to the factory intake plenum and individual throttle bodies. As the air charge flows past the throttle plates, Injector Dynamics ID1000 injectors spray fuel into the intake ports as the air/fuel mixture fills the cylinders.

To further raise the ceiling of performance, Craig elected to do a flex fuel conversion on his Skyline. Using an ethanol content analyzer in conjunction with an AEM V2 EMS engine management system, Burgess once again dialed in the fuel and ignition tables, this time with scaling for E85. This added the flexibility to run 91, E85 or any mixture of the two at any time. With E85 in the tank and the tables optimized, the GT-R put down 649 horsepower and 521 lb-ft torque to the rollers of FFTEC’s Mustang AWD Dynamometer. 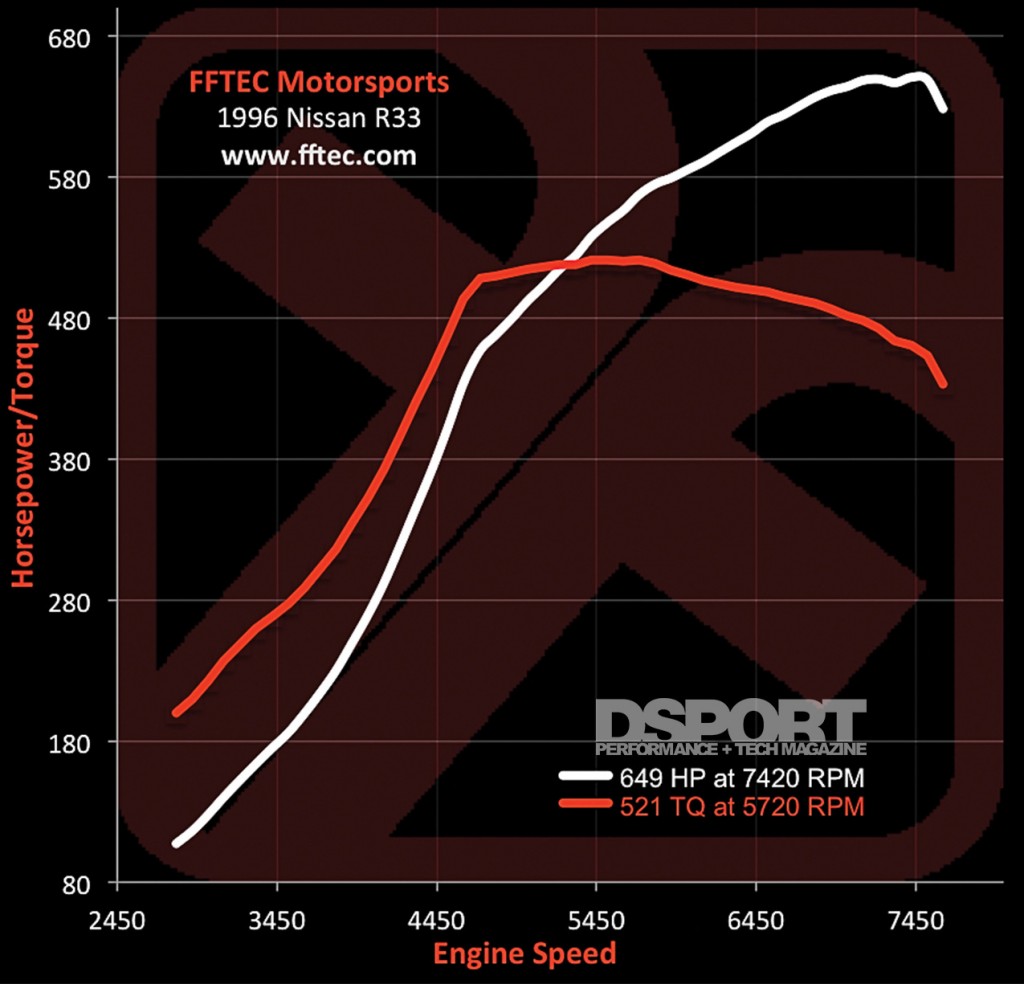 Producing more than twice the factory horsepower output took the Skyline to the next level for Craig. Now he wanted the R33 to look the part. BC Racing adjustable coilovers dropped the chassis over a set of WedsSport SA55 wheels mounted with Pirelli P Zero rubber, closing the gap between the arches and the tires. Inside the cabin, Craig risked information overload as a host of DEFI gauges on the A-pillar and in the glove box supplement the NISMO gauge cluster in front of the steering wheel. 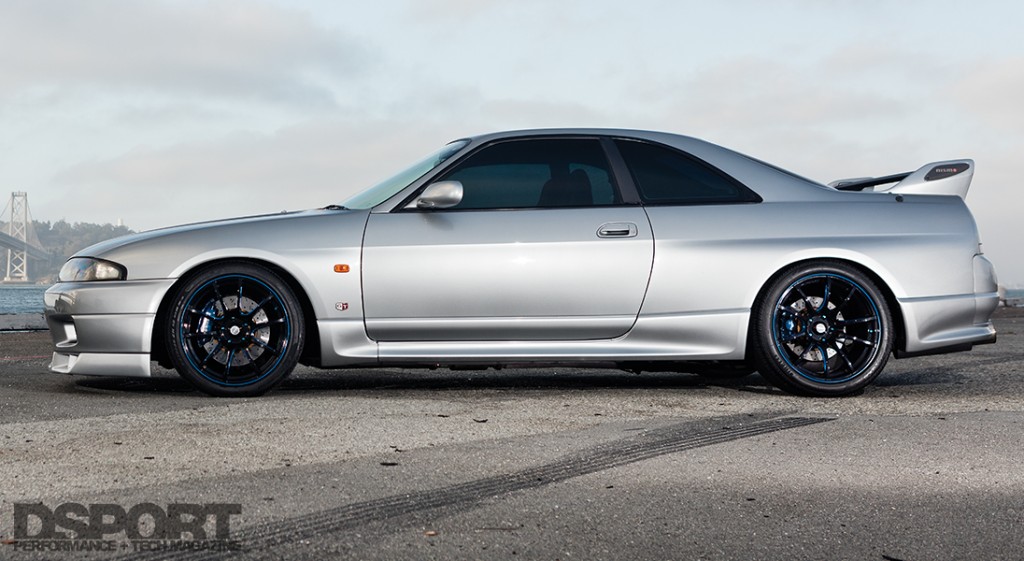 From Dream to Driven

Craig’s path to owning an R33 Skyline GT-R took almost a decade to come to fruition, but he stated that it was well worth the wait. From the first time he read about the GT-R to finally finding one, building it and earning a feature in the very magazine that he first learned about GT-Rs, Craig’s path with this car has come full circle. But Craig isn’t one to sit idle and content. He’s already researching his next round of improvements. He plans to enhance the volumetric efficiency of the engine with some cylinder head work, followed by a switch to a larger single turbocharger aimed at hitting the 800 horsepower mark. He’s also going to have a new bumper and lip spoiler painted and installed by Vince at Marina Auto Body. Ultimately, the greatest satisfaction comes from being able to street drive a rare car that some still haven’t heard about. To Craig, they have no idea what they’re missing out on. 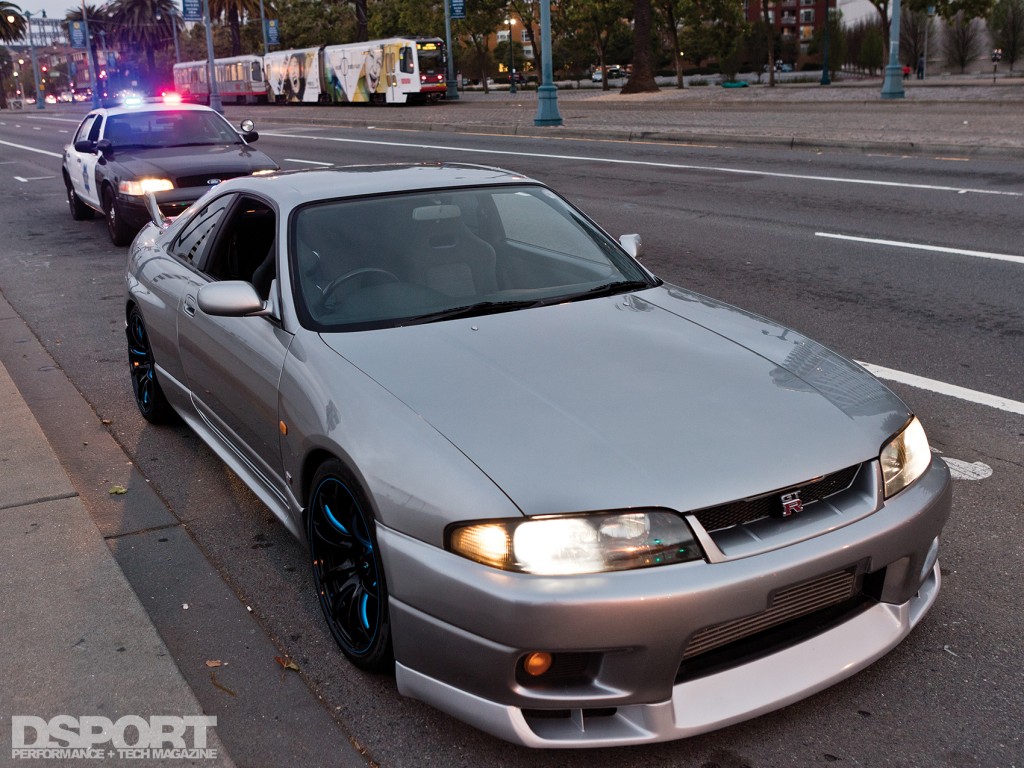