“A front-wheel drive running 12s in the quarter mile…that’s impossible.” That was the mentality of the drag racing community when Hondas would frequent the drag strips on weekends and at early Battle of the Imports events back in 1994. Not long after the “impossible” proved to be just a matter of time. Timeslips in the 11s, 10s, 9s and ultimately 8s would be attained. Today, the big question surrounds the 7s. When, where and how can a front-wheel-drive break into that elusive and exclusive range? From all estimations, a front- wheel-drive running in the 7s would have a trap speed in excess of 180mph. Zero to over 180mph in just seven seconds, it may be better than sex, but it definitely doesn’t last as long. 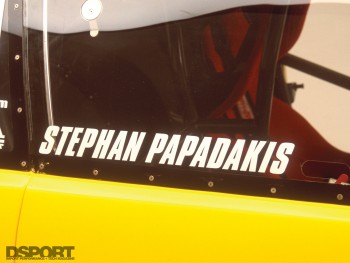 “While the AEM DRAG Civic Team accepts the challenge to be the first front- wheel-drive into the 7s, we recognize that someone following a completely different path may get there first. We have been extremely fortunate to have the right support and sponsors to be the “favorite” to break into the 7’s.” On November 11th, 2001 at the IDRC Long Horn Nationals, the AEM DRAG Civic ran an 8.12 at 180 mph. This was the quickest and fastest performance from the car to date. At the start of the 2002 season, expectations were high and the 7s didn’t seem that far away. Now seven months later, if the first half of 2002 has proven anything, it is that the 7s are definitely going to be a challenge.

“Not being what I would consider a professional writer, I asked DRAG Sport for some direction and advice. They suggested that I talk about how we learned from our first tube-frame front- wheel-drive Honda and how we used this knowledge to build the AEM DRAG Civic. If there is anything that a beginning racer needs to understand about drag racing, it is that you rarely get things 100-percent right on your first racecar.” 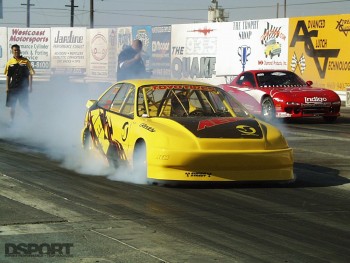 Run after run, the frustration begins to mount. The more attempts to go quicker the more we begin to say “damn front wheel drives.” It’s so aggravating. Every time the car launches, it transfers the weight back away from the drive tires. That is exactly why all of those nostalgic hot rod racers think we are crazy. We are fighting the laws of physics when we drag race a front wheel drive. As I fixed my eyes and mind on my 1999 Civic, I tried to figure out what changes could be made to make the new car quicker in the quarter mile. Two things seemed obvious. For one, perfecting the wheelie bar to limit weight transfer made a lot of sense. Second, improving the weight bias by making the car as light as possible behind the drive wheels also followed along with the laws of physics and what we knew. Then, I began to think even more, “What would be the new innovation that would help a front wheel drive racecar to break into the 7s?” After a great deal of thinking, it finally hit me. 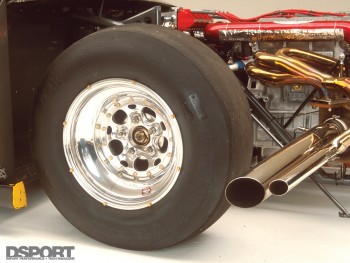 The thought of moving the engine further forward made sense. In turn, that would place more weight on the front tires and move the weight bias toward the front. The vision of a Formula 1 car popped into my head (actually the vision of the drive train layout that I remembered from a cutaway illustration). Could a mid-engine type transaxle be used on a front-wheel-drive chassis? It seemed possible. Most mid- engine cars use a transaxle, which allows the car to run power to the rear wheels with only a few drive train elements. Traditionally on a rear-wheel-drive car, the engine is connected to a transmission then to a driveshaft, finally ending up at the rearend which transmits the power to the axles attached to the wheels. With a transaxle set-up traditionally used on a mid-engine configuration, the transmission, driveshaft, and rearend are all packaged into a single unit, the transaxle. The transaxle needs minimal space and weighs considerably less than the typical rear-wheel-drive setup.

With a transaxle, we could mount the engine lengthwise with the car (longitudinal) and this would put more weight further forward. A second benefit would be that the whole package for the engine and transmission would now be narrower. This would allow more room for the suspension. More room for the suspension and wheels is exactly what we needed. It is the reason why you typically see widened one-piece front ends on most front-wheel-drive drag cars.

Now it was time to do some investigating on a transaxle that could do the job. After all we had no one to turn to as we would be the first import team to go from the traditional transverse configuration to the longitudal. Our initial thoughts 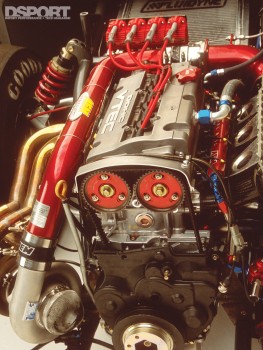 were to look to Europe, namely Hewland and X- trac transmission (makers of almost all types of racing transmissions). Both offered great transaxles but neither offered one that would work. The transaxle that we needed had to be strong, shift quickly, turn counter clockwise (the direction the Honda engine turns), and be affordable. The European transmissions were neither affordable nor able to deal with the Honda engine’s unconventional rotation.

Asking everyone that we knew, we were eventually led to a somewhat local company named Fortin. A two-hour drive to the Fortin Racing location was our next step. With measurements and specs in hand, we took a look at what Fortin had to offer. As it turned out, the Fortin transaxle could be made to work with just a few modifications. Now the new transaxle combination was put in order. All we needed was to put this transaxle in a new chassis.

But who do we get to build this one-off car? Our ’99 Civic was built by Shaun Carlson, an extremely talented and driven fabricator, and friend. Working on his own racecar, a Ford Focus Outlaw, he did not have the time. We asked Shaun who he thought might be up for the task. One of the suggestions was Rob Miller, a 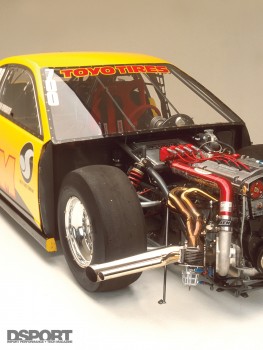 friend of Shaun, that had been by the shop and helped Shaun put the finishing touches on his own racecar. Rob was an industrial electrician that built cars in his spare time. Rob was very talented with a great knowledge of off- road cars, but he was new to front-wheel-drive drag racing. Considering Rob’s fabricating skills, and our experiences with the ‘99 Civic, we believed that we had a team that could get the job done. Rob quit his current job and now worked full time to build the AEM DRAG Civic.

It was now time to select a body so that the tube chassis could be started. A few meetings and some motivation from Honda North America, led us to the use of the then brand new body style 2001 Civic Coupe. A carbon-fiber body replica of this car would be used. As you can guess, using a carbon-fiber shell allows the car to weigh considerably less than it would with conventional steel body panels.