AEM Drag Civic | The 7s, When, Where and How Skip to content
Top Stories
​

We took possession of a pre-production 2001 Civic coupe in August of 2000. The car was then sent to Hanneman’s to have the Carbon Fiber body built. The first step was to make a plug from the body of the car. The “plug” is what the body man uses to make the mold. The mold is what is used to produce the final carbon fiber shell.

We received the carbon-fiber body in September. That left us only two months to have a rolling car for the debut at the SEMA show in Las Vegas, Nevada in November. 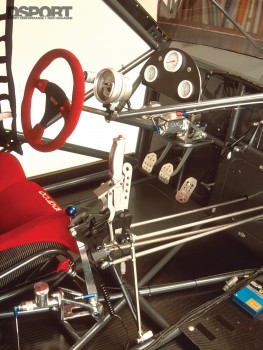 With the part-time help of Rory, Rob’s brother, the chassis was ready for a showing in Honda’s booth at the SEMA show. Honda had a press conference announcing their support of both the car and our team. It was a huge hit. We had kept the new race car secret until then, and it was a big surprise to everyone. Now, we had the spotlight and along with it, the pressure to perform. There was a great amount of money invested, and we were not about to let Honda or any of the team’s sponsors down. If our team did not deliver, the chances of Honda or the other major sponsors supporting any import racer in the future would be slim. The AEM DRAG Civic had to perform to expectations.

After the show, it was time to finish the car. Because of time constraints, we left SEMA with only a painted body . The car was far from being race ready. As we worked on completing the chassis, safety was of the utmost concern. As a driver, I wanted to concentrate on driving and not worrying about if I would or wouldn’t survive a crash at 180mph. Additionally, brakes become very important at 180mph. In the front, we installed carbon disks with carbon pads from Lamb Components along with the company’s billet- aluminum calipers. As for the rear brakes on the AEM DRAG Civic, these are really only used for the burnout to hold the car. Using the rear brakes at the top end of the track results in a dangerous lock up condition. This is mainly due to the tires narrow width and the minimal amount of weight that sits on top of them. Since we didn’t need the heat capacity of a carbon rotor, AEM fabricated custom lightweight aluminum rotors to work with the Lamb Components calipers and rear suspension.

Another major concern was 180mph top-end stability with a racecar that has so little weight over the rear wheels. If the aerodynamics were not right, we were afraid that when the brakes were applied the rear tires would lift off the ground. For the first testing season, we used a dual-element spoiler, which produced over 800 pounds of down force at 170mph. As we tested, we adjusted the wing to decrease the down force run after run until we had only the minimal spoiler we needed. In racing, you only want the minimum amount that you need, because beyond that you’re using up your horsepower to overcome drag. The additional aerodynamic modifications provide that the underside of the car is smooth and flat from the front until the rear axle. From the rear axle back, the under panel transitions to an 11-degree diffuser to decrease lift, and reduce aerodynamic drag. 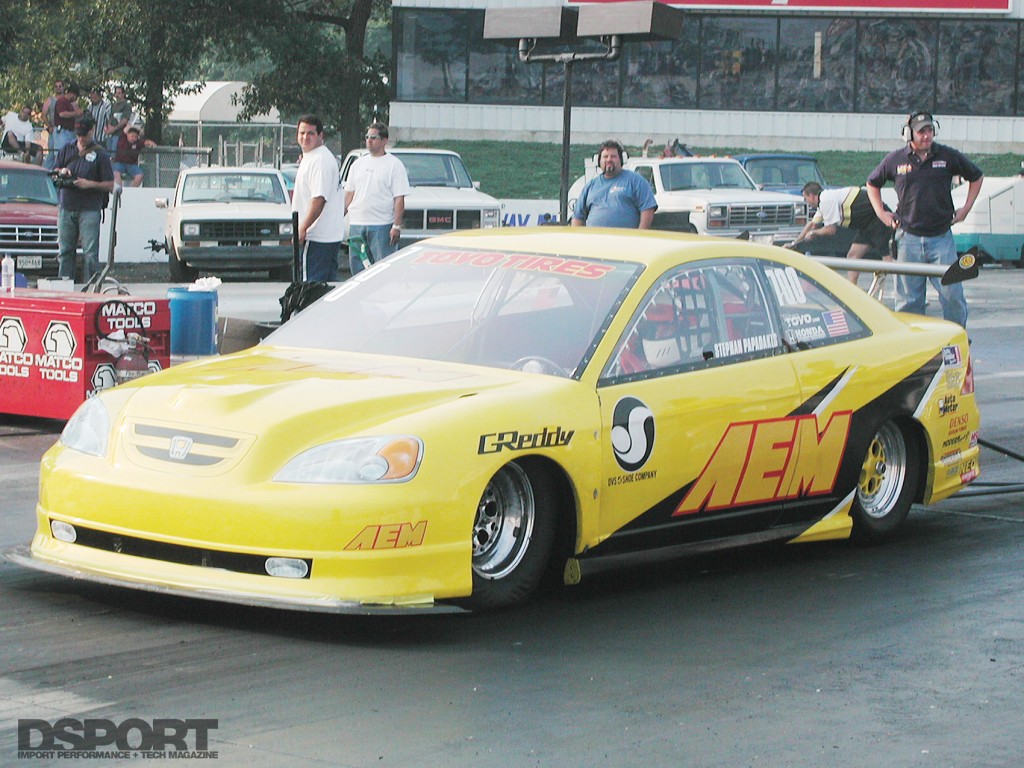 With the AEM DRAG Civic, financial backing made it possible to purchase the best parts and make a lot of custom one-off parts that were not readily available at the time. The engine we used is a 1995 2.2 Liter Prelude V-tec, a production code H22A. A factory crankshaft, billet connecting rods, JE custom forged pistons, and some magic from Benson’s Automotive Machine set the foundation. Up top, we would run a Ferrea valve train, installed into a ported head by Port Flow. So that I could only be mad at myself if anything went wrong with the engine, I did all of the blueprinting and assembling myself.

To feed enough air and fuel into the monster to make the power, the intake manifold was crafted out of carbon fiber. Eight 1600cc RC fuel injectors (that’s two per cylinder) were used to supply the massive amounts of m ethanol to the engine. Hi-Tech built the turbo manifold out of stainless steel, to connect a T88 GReddy Turbo charger, a key element in making over 700 horsepower with a four cylinder. The GReddy T88 forces air directly into the intake manifold. No air-to-air or air-to-liquid intercooler was used in order to save weight. Our theory was that the generous flow of methanol injected into the engine would cool the air charge from the turbo charger enough so an intercooler would not be necessary.

Despite a very busy year racing the 1999 Civic Hatchback, and building the new 2001 Civic Coupe, the AEM DRAG Civic was finally race ready at the end of June 2001. The first test sessions were at Los Angeles County Raceway in Palmdale (Littlerock), California. Known for uncooperative conditions during that time of year, our Southern California location provided no alternative choices. Despite the 100-plus temperatures and high winds, we ran a best of a 10.17 during the three runs. But breaking records was not why we were there. Our mission was to find problems and make improvements as needed. Overall, the car checked out OK. We made the debut of the AEM Drag Civic at a NIRA race in late July of 2001. That weekend we took home the win, and gathered tons of information and data during the ten runs we did over the three days.

The rest of the 2001 season included eleven races and three shows where we would be racing and making appearances. Along the way, we made changes including, but not limited to, making the transmission a four-speed instead of the original five speed version, modifying the transmission gear ratios, experimenting with new tire sizes and compounds, and dialing in the suspension. On November 11th, 2001 at the IDRC Long Horn Nationals, the Coupe ran its best ever with the 8.12 at 180.00 mph.

As for the 7s, they have become further away rather than closer this year. Getting the car to work with the new tires has definitely been a challenge. We’ve also experienced a couple of shifter and transmission problems early on in the year. However, having the car run consistently quicker and faster at the IDRC Summer Slam event this year, we have a new found confidence in the car. Now, with a little luck and the right track conditions, the 7s seem a possibility. Whether it is at the IDRC Long Horn Nationals this year (at River City Raceway in San Antonio Texas, one of the quickest and fastest tracks on the IDRC circuit) or somewhere else, we just can’t wait to reach the 7s.