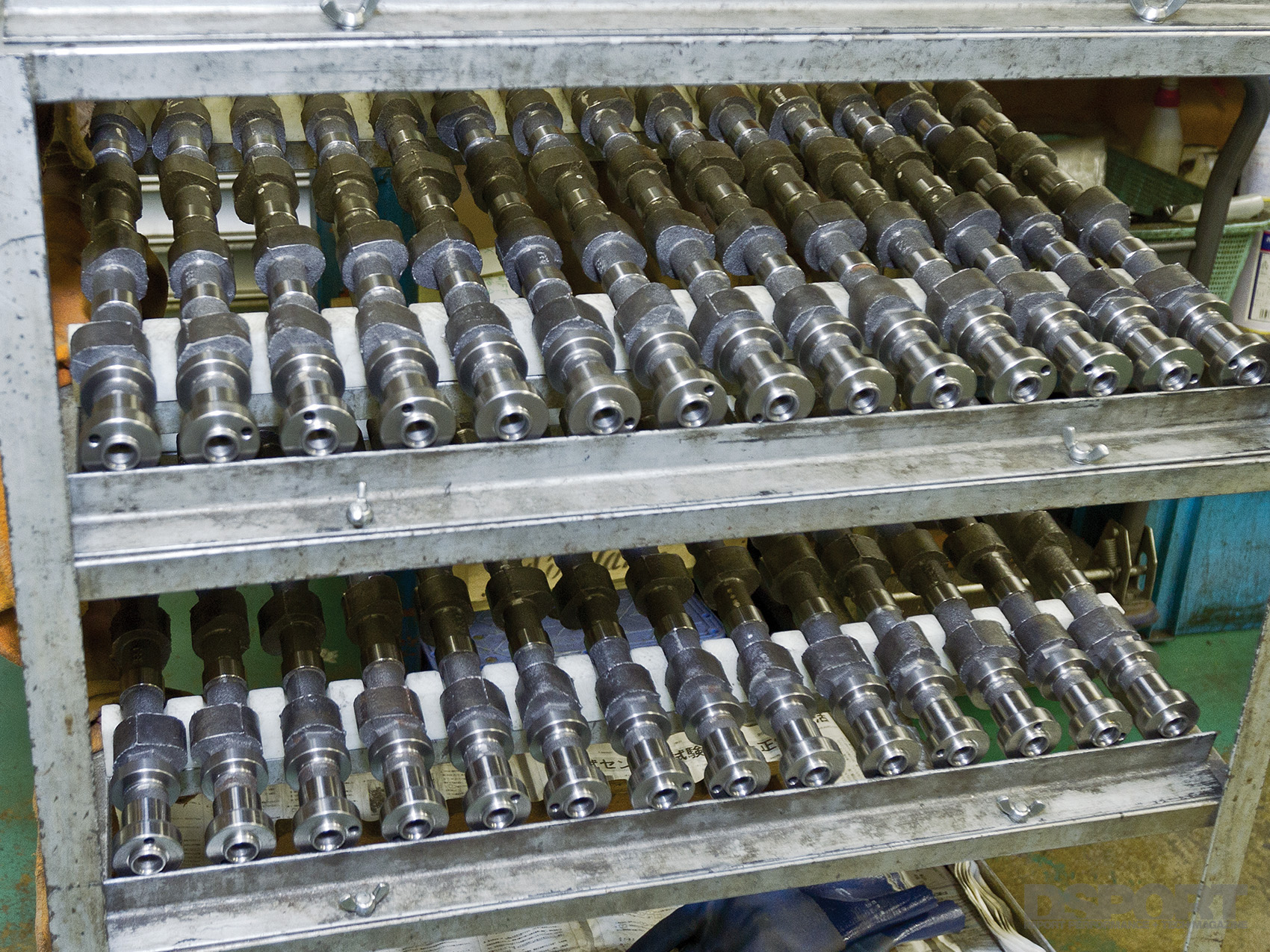 While performance camshafts are the most important component selection on an “All-Motor” build, many underplay the importance of proper camshaft selection on forced-induction applications. However, the reality is that a proper set of cams might easily add 100 horsepower or more at the wheels without changing boost pressure. With or without boost, the camshafts determine the behavior and character of the engine by establishing the range of peak volumetric efficiencies and cylinder filling. Camshafts also establish an engine’s emission profile and idle quality. While OEM camshafts idle smooth and polished, a more aggressive aftermarket camshaft might idle rough and raw. Understanding the function, design and science behind proper camshaft selection will allow you to maximize your performance experience.

Function of the Camshaft 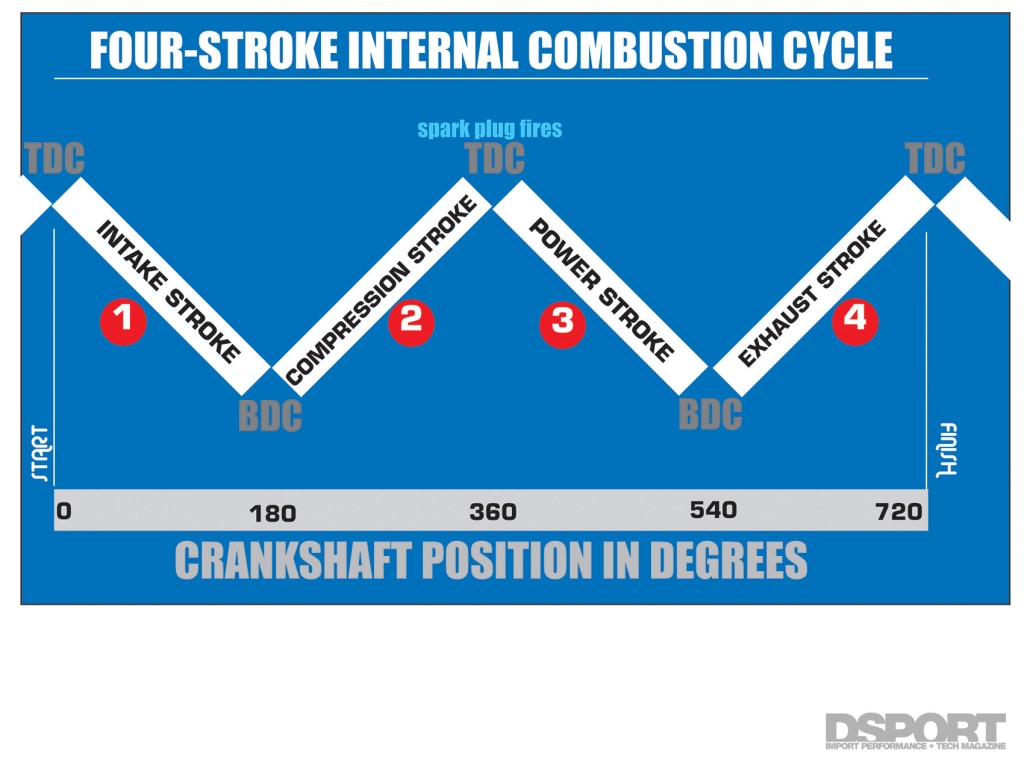 The four-stroke process that occurs in your car’s engine is as follows: intake, compression, power and exhaust. While the connecting rod length and the crankshaft’s position and stroke ultimately determine where the piston will be in the cylinder at any given degree of rotation, it’s the camshaft that determines the position of the intake and exhaust valves during all four strokes.

In the performance symphony, the camshaft is the conductor of valve events. It orchestrates which instruments play (intake or exhaust valves), when they play (opening and closing events) and how loud they play (valve lift). Whereas OEM cams offer a classical sound, aftermarket cams can really make your engine rock.

The Band of Power

As mentioned earlier, the camshafts determine an engine’s character. Where does the engine begin to make power? Where does the engine begin to fall off in power production? Is the power delivery flat and consistent or aggressive and peaky? These questions are answered in the description and understanding of the engine’s powerband. Some powerbands are narrow, while other are broad. Some are peaky, some are flat. An engine that makes notable power from only 6,000 to 8,000 rpm (a range of 2,000 rpm) would be considered to have a narrow powerband. A comparable-sized engine that makes power from 3,000 to 7,000 rpm (a range of 4,000 rpm) might be considered to have a broad powerband. The camshaft and its complementary valvetrain components will establish the powerband of the engine more than any other internal components of the engine.

[pullquote]THE CAMSHAFT AND ITS COMPLEMENTARY VALVETRAIN COMPONENTS WILL ESTABLISH THE POWERBAND OF THE ENGINE MORE THAN ANY OTHER INTERNAL COMPONENTS OF THE ENGINE[/pullquote]Even if you don’t know too much about engines, you probably know your engine’s displacement. Displacement is “how big your engine is” in the redneck vernacular. For example, you might have a 1.8-liter, 2.0-liter or 3.0-liter. This number represents the entire volume of all of the cylinders in the engine. Volumetric Efficiency (VE) represents the ratio of the volume of air actually ingested into the engine compared to its displacement. Displacement does not include the clearance and combustion chamber volume. If an engine is 2.0-liters in displacement, and at a certain engine speed it’s able to take in 80 percent of 2.0-liters (1.6-liters of air), then the volumetric efficiency of this engine at that rpm is 80 percent. The volumetric efficiency of an engine varies with engine speed. It will increase with engine rpm from idle until the engine reaches peak torque, and at peak torque, volumetric efficiency will be at its peak value. When engine speed is increased past the peak torque rpm, then the volumetric efficiency will decrease until redline.

All About Volumetric Efficiency

You’ve probably heard from someone that “an internal combustion automotive engine is just a sophisticated air pump.” Here’s the truth: What you have been told isn’t entirely accurate. The engine’s purpose is to perform energy conversions to produce horsepower. Internal combustion engines turn the chemical energy in the fuel into thermal-pressure energy in the cylinder through combustion. Finally, the engine converts this pressure energy into mechanical energy at the flywheel. Of course, even the worst analogies have some sort of basis in truth. So what’s the real relationship between internal combustion engines and air? It’s really simple. Internal combustion engines need the oxygen in the air to be able to combust the fuel. When the engine can ingest a higher mass of air, more fuel can be added and combusted, and the result of being able to burn more fuel is the production of more thermal energy. This means more power.

When you increase the volumetric efficiency of an engine, you increase the amount of air that gets into the engine, and when the proper amount of additional fuel is added, additional horsepower is the result. The simplest ways to improve volumetric efficiency involve eliminating the restrictive components in the path of airflow into the engine and exhaust out of the engine. A low-restriction air filter allows more air to get into the cylinder during the intake stroke of the engine. On the exhaust side, a better-flowing exhaust system can make sure all of the exhaust gasses exit the cylinder on the exhaust stroke. As a result, a higher volume of fresh air is available on the next intake stroke. In general, these basic improvements will provide additional power and volumetric efficiency at nearly all engine speeds, from idle to redline. Basic cylinder head porting can also provide improved volumetric efficiencies at all engine speeds. However, more aggressive cylinder head porting may provide additional volumetric efficiencies at higher rpm, while trading off some lower rpm performance. When flow velocity is reduced, the cylinders may not get filled during the period that the valves are open. Hence, mass flow numbers and flow velocities will both influence power output.