Don’t judge a book by its cover. When you see a big V8 engine rolling next to a humble, compact car at the start line, you automatically declare the winner in your head; however, the dragstrip knows no remorse. When it comes to racing, the factory advertisement means nothing. In 1999, Honda released a promo to market their all-new Honda S2000. In the video, the driver presses the Push Button Start on his convertible S2000 and the narrator confidently says, “amazing things can happen – when you push the right button.” Nearly 20 years later in this modern, advanced-performance times we live in, pushing that very same button may give you joy, but hardly anything amazing happens – until builds like this surface. 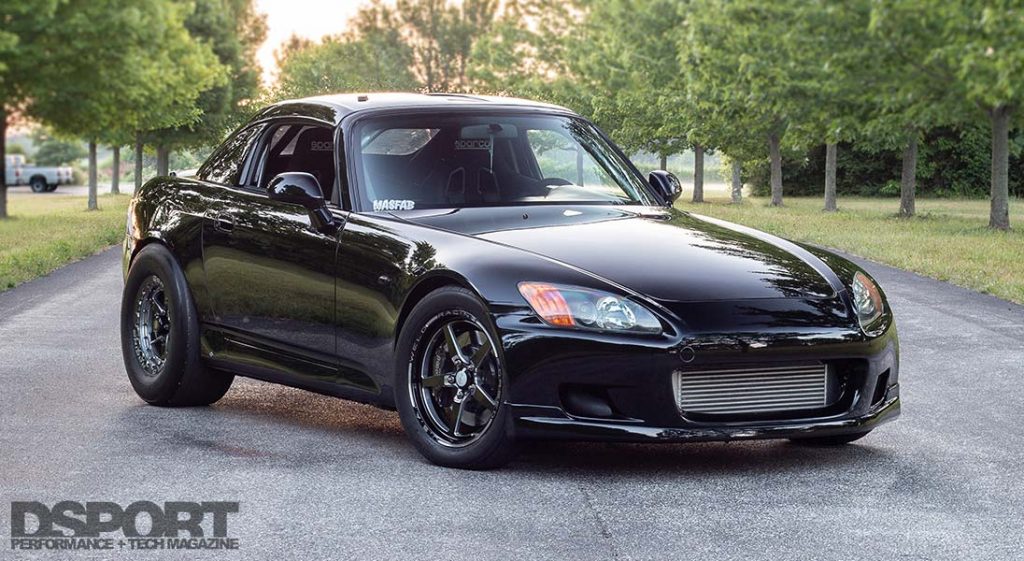 It would be a shame to get right into the story without paying the proper tribute to the future-classic in the Honda S2000. After Honda kept the world on its toes with their release of the NSX, a 3.0-liter V6 with Variable Valve Timing and Lift Electronic Control technology, looks that kill, and tons of aftermarket potential; no one thought they can keep that momentum. In 1999, Honda dropped another surprise on its fans. This time, it was the Honda S2000 AP1. In celebration of its 50th anniversary, Honda released the S2000 to carry on the tradition of their S500, S600, and S800 roadsters from the ‘60s.

The AP1 S2000 was powered by a 2.0-liter inline four-cylinder engine with DOHC-VTEC technology. The F20c engine delivered 240 horsepower and 153 lb-ft of torque with the help of a six-speed manual transmission sending power to the rear wheels. At the time, this was the highest power output for any naturally-aspirated car in the world, a massive statement made by the Japanese automaker. The hot-roadster had a firm chassis, great handling, extremely high-revving twin-cam four, simple and efficient interior, and an exterior that was sure to attract all eyes. The S2000 continued to get better, even receiving a bigger engine (2.2-liter) in 2004. Unfortunately, consumers have been robbed from enjoying the S2000 for the last nine years due to sales decline, making this extremely-fun coupe a guaranteed near-future classic. 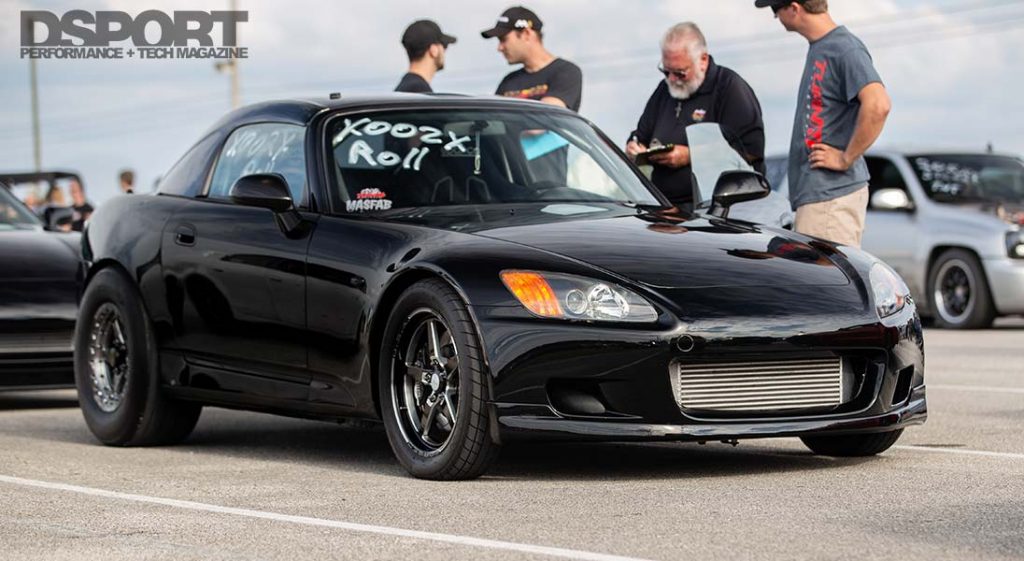 The Start of a Journey

Evan Rubin, a long-time S2000 fan, saw a dealership advertising their one-owner S2000 for sale in 2012 in Indianapolis. Not knowing what to expect, he made his way to that showroom. After just a few hours, Evan went home with his completely-stock 2000 Honda S2K AP1. Rubin was no stranger to the S2000. After driving one before, he fell in love with its enclosed cockpit. The stock car brought him joy in turns, thanks to its nimbleness and handling capabilities. However, not everything about the car spoke to him. Evan is a high-horsepower-driven gentleman. The 240 horsepower that the S2000 offered were not nearly enough for him, but this was not an issue since he had a plan well before putting that last signature on the dealership’s paperwork. 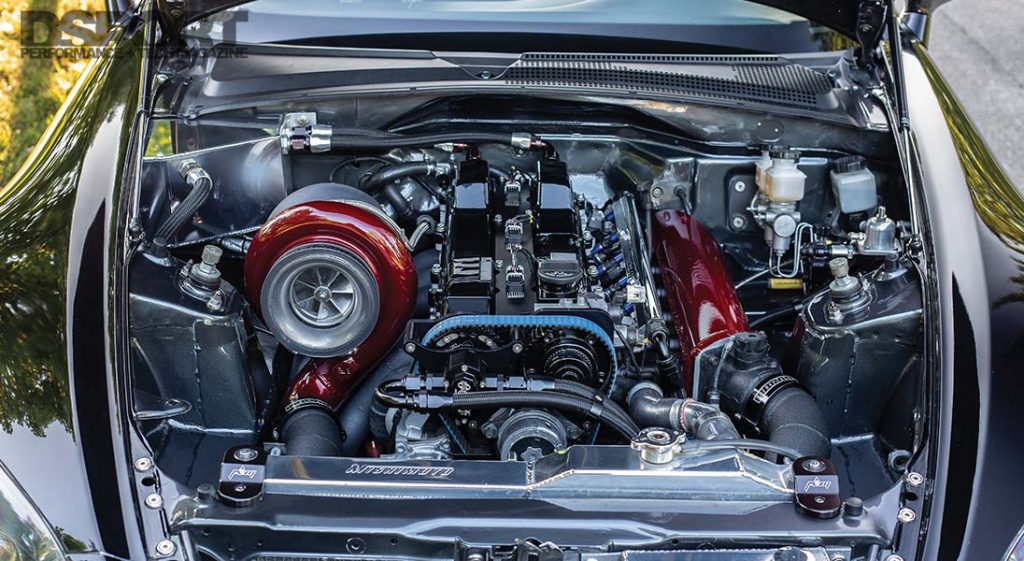 Despite being a fan of the S2000, Rubin was also a fan of the Toyota Supra, specifically its 2JZ heart. The 2JZ-GE is a 3.0-liter, straight-six engine that delivered 223 horsepower and 210 lb-ft of torque, and the turbocharged 2JZ-GTE delivered 320 horsepower and 315 lb-ft of torque. Designed to compete with the RB26, the 2JZ was built on an iron-block foundation and it was nearly bulletproof. In its stock form, the 2JZ is capable of handling over 800 horsepower. Decide to build it, and the sky is the limit for this platform. After deciding on the S2000, the plan was clear: S2K with a 2JZ swap. The 2JZ was no lightweight, however, which meant Rubin had to go all out to get the kind of response he needs from his Honda S2000. 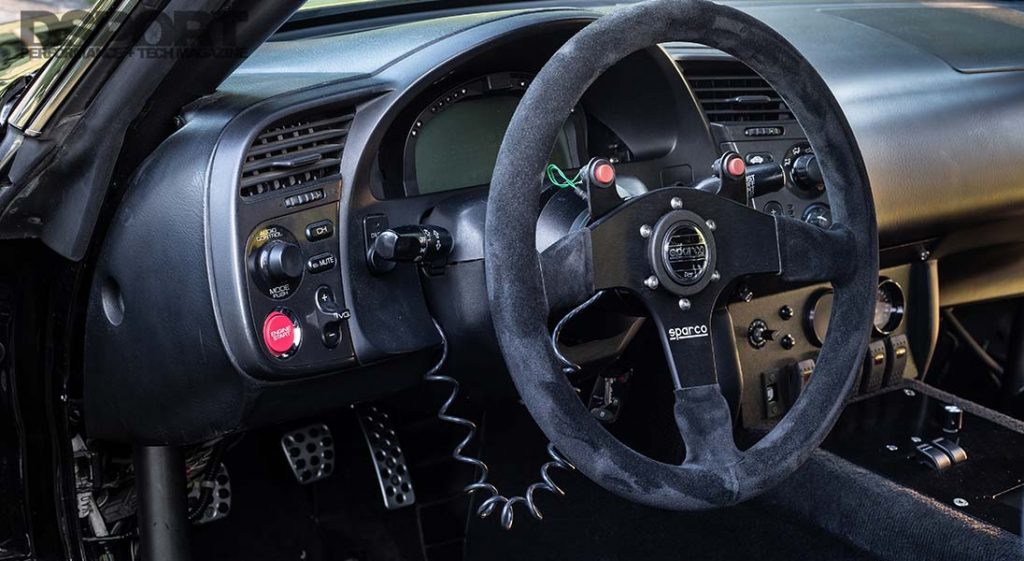 Evan Rubin knew he had to be a part of the 1,000 horsepower club, and by choosing the 2JZ engine, the goal was in clear sight. Achieving over 1,000 horsepower with a 2JZ is not too difficult; however, fitting a large six-cylinder in the place of the four-cylinder is where the challenge lies. The swap was done years ago, and unlike today, there wasn’t much aftermarket support for such “madness.” Things like engine mounts and even information and support were non-existent, which pushed Evan to think outside of the box and go the custom route. “The challenges weren’t so much lack of parts as they were the time invested into creating the parts,” said Evan Rubin. Although getting the 2JZ to fit in the place of the F20 was difficult, wiring was a breeze. Ascension Motorsport offered specific solutions for this swap, and the Haltech Elite 2500 made engine management easy. The team integrated boost by gear in conjunction with traction control, CO2 boost control, and rolling anti-lag to ensure the car excels at its job.

(L) Instead of relying on manifold pressure, a CO2 tank is used to close the wastegate to regulate it, thus controlling the boost. (R) The 2JZ works collaboratively with a CD009 transmission. This gearbox is found in the Nissan Z cars; however, its durable construction made it popular with LS-series engines and powerful builds.

Before placing the 2JZ into its new home, it was bored by .020 inch. Internal components, such as pistons, rods, bearings, and valves, were replaced with quality aftermarket parts to allow the 2JZ to handle over 1,000 horsepower. Finally, a Borg Warner 82mm turbocharger graced the engine, pushing the power to 1,150 whp @8,500 RPM and 890 lb-ft of torque @8,500 RPM. This is accomplished when running at 42 psi of boost using Ignite racing fuel (114 red). This pushed Evan right where he wanted over the 1,000 horsepower mark. “She treats me pretty well for the amount of time spent on it,” Rubin reflected. “In regards to good luck, the engine has always stepped up to the table and ran stronger than anticipated. All I can say is using quality products in the right way is so crucial for success.” 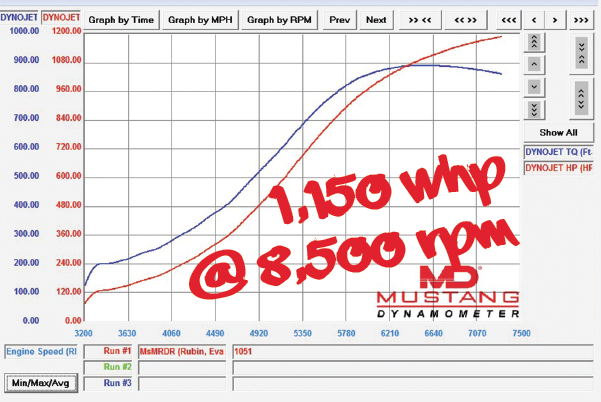 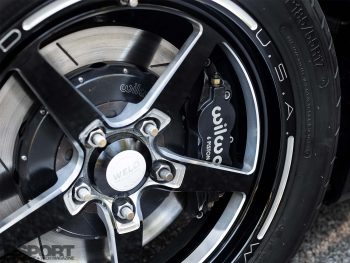 Evan’s S2000 weighs only 2,985 lbs, which means it was crucial to upgrade the chassis, suspension, and driveline to handle the 1,150 whp that the 2JZ is producing. Anything less than perfect, and the roadster becomes more of a hazard. Rubin equipped the car with Bilstein PSS10 coilovers, which offer 10 clicks that allow him to choose the perfect setting for this type of power. Chassis is strengthened using a 10-point roll cage. This reduces body roll and adds safety in case of an emergency. Sending power from the 2JZ to the wheels is a Nissan CD009 transmission, and traction is enhanced using Mickey Thompson ET Street Rs (275/60R15). With the engine delivering 1,150 whp and the S2000 is ready to handle every ounce of this power, it was time Evan starts enjoying the car. 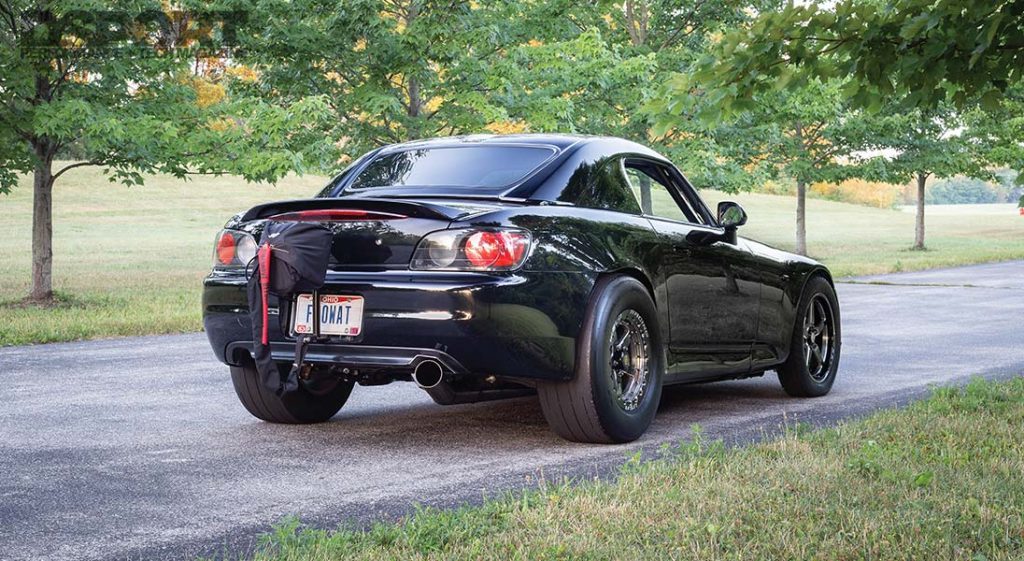 Time for a Drive

The car was finally ready for most tests Rubin can throw at it, but the journey was nowhere near easy. The build took years to get to where it’s at, and after many late nights that turned into early mornings fighting with the car and its issues, Evan Rubin was finally ready to try his first half-mile race with this S2K. Evan’s car currently holds the S2000 Chassis record in the ½ mile race with a 180 MPH pass. However, since this record, the S2000 grew to deliver even more power, so expect the record to be broken soon. Evan is happy with where his car stands right now, especially the fact that no one can tell the car can produce this much power, thanks to the quality tuning and the Haltech software for squeezing every last ounce of power. If you see this car on the streets, you may think it’s just your average drag car, but make no mistake about it, this 2JZ-powered S2000 can almost fly.