In the early days of the import performance tuning scene, the MKIV Supra stood out as a giant among men with its potent twin-turbocharged straight-six engine displacing more than twice the size of many of the popular platforms of the day. Because of its relatively high power ratings off the showroom floor, many modifiers focused more on enhancing appearance and less on increasing performance. Eventually, as the Supra entered into scarcity and other more affordable platforms hit the market, the varying schools of thought on modification converged and settled into two basic camps – one that preferred fashion over function, and the other that utilized the function as fashion. This is what led to the appearance of show cars sporting race-features like parachutes, and race cars wearing high-dollar paint jobs down the drag strip. 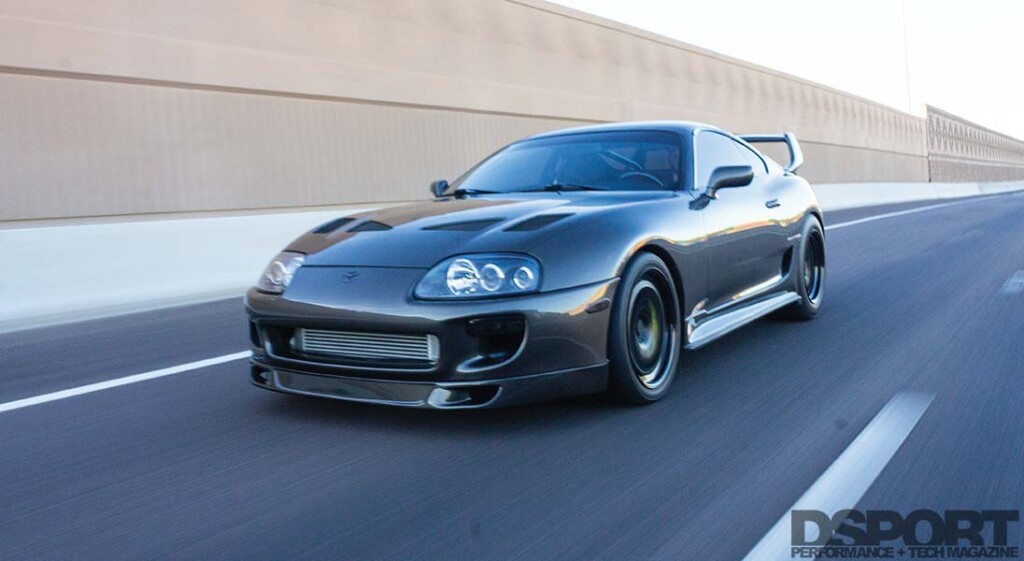 Michael Burrell’s interest in the platform piqued in high school and after running through a gamut of modified cars, including seven Supra’s, this final iteration came into his life in 2018. “The previous owner found an old Wanted to Buy ad off the Supra Forums that I had made in the early 2000s,” Burrell explained. “After a week of looking at pictures, I purchased it sight-unseen and had it shipped. This car was the perfect unicorn; the only thing missing was my own personal touch.”

Burrell continued, “Growing up watching the 1,000-plus horsepower Supra’s tear up the Arizona tracks and highways – that was always the goal.” So, building up the legendary Toyota 2JZ-GTE powerplant was the first item tackled. At the root of the power-up is the Real Street RS 1600 3.4-liter stroker kit. In addition to the almost half-liter additional displacement added, the kit offers insurance to have the engine remain intact under the increased cylinder pressures seen in the namesake 1,600-horsepower range. The 0.5mm-oversized CP Pistons are pushed by Carrillo Extreme Duty Pro XD connecting rods motivated by a Brian Crower 94mm Stroker Crankshaft, a full 8mm over the original 2JZ-GTE, with a final static compression ratio of 10.0-to-1. ACL HX Race bearings occupy the requisite surfaces of the rotating assembly to keep the rotating mass turning smoothly and without incident.

On top of the massive cast-iron block, the factory cylinder head was first re-worked with a Headgames full-race/street port to improve the intake and exhaust airflow passages. A pair of GSC R2 278-degree camshafts orchestrate the dance between the Ferrea 33mm Comp Plus intake valves, Headgames Pyrometer exhaust valves and the combustion chambers, all separated from the outside world with a factory Toyota head gasket and held firm with a set of ARP CA 625+ head studs. 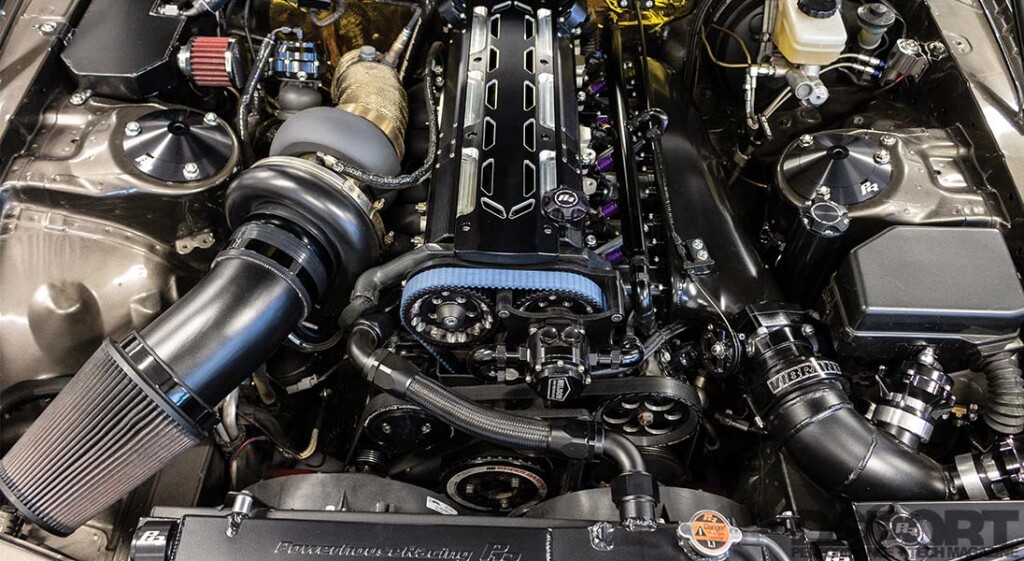 The understated quality of the engine bay offers the trained eye a sneak peek at the Supra’s power-producing potential: the massive Precision Turbo 8685 unit; twin TiAL wastegates and bypass valves; and the massive SR-FAB front-mounted intercooler.

The Power of One 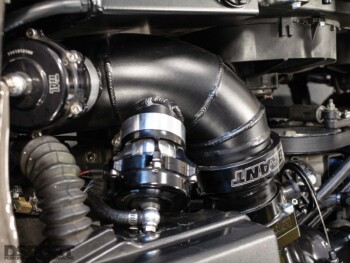 While the factory 2JZ engine was a potent base upon which to build power, it was the twin-sequential turbochargers of the GTE variants that made the MKIV Supra the stuff of legend. Still, elevating the car from sportscar to near-supercar status required horsepower production levels that near or exceed the four-digit mark, and years of tuning experience pointed to the single-turbo conversion as the path of least resistance. Feeding the inlet side of the single Precision Turbo 8685 Gen 2 divided T4 turbocharger is an SR-Fab intake pipe capped with a filter. The inlet air flows through an SR-Fab 4-inch intercooler core for a reduction of charged intake air temperatures before entering a high-volume, Hypertune 90mm throttle body and intake manifold combination.

The spent exhaust gasses exit the cylinder head through a Powerhouse Racing S45 equal-length turbo manifold that is said to increase the turbine-driving efficiency of the massive Precision Turbo as well as the boost-controlling capabilities of the dual TiAL 60mm wastegates. The remainder of the spent gasses exit through a Powerhouse Racing downpipe and Burns Stainless muffler before exiting behind the vehicle. The powertrain is capable of 52 psi of positive pressure, a configuration good enough for a 1,483-horsepower, 1,096 lb.-ft. torque dyno run, both peaking at 7,000 rpm. 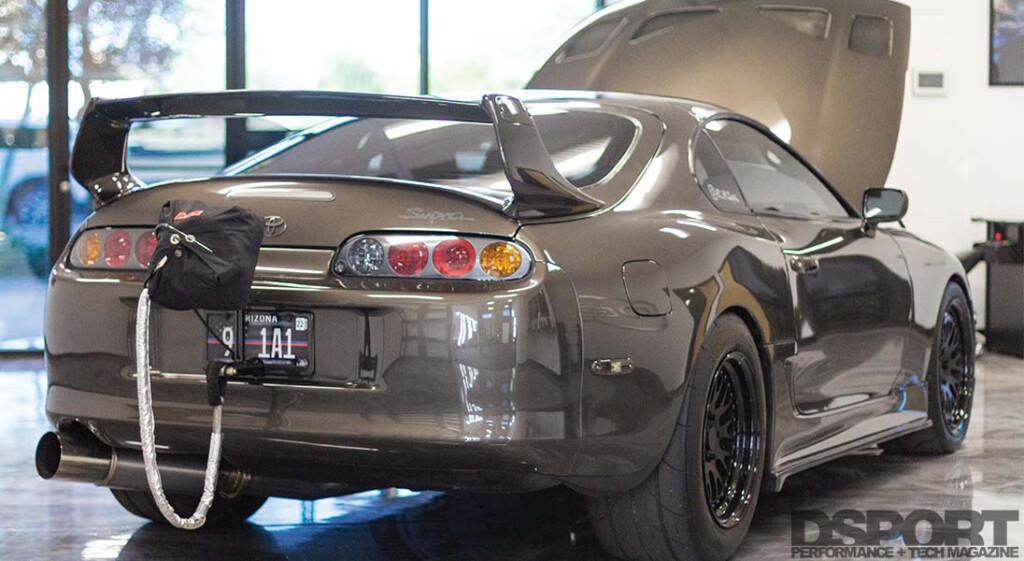 While the Toyota V160 Getrag transmission is a fairly stout example of quality OE-grade products, expecting it to survive repeated blasts with horsepower output increased five-fold is ludicrous. Burrell discovered this the hard way when he started experiencing transmission woes with the stroked powerplant. Even with a vibrant aftermarket, good examples of V160 transmission and supporting parts were few and far between. To that end, Burrell bit the bullet and opted for the Samsonas RS90 sequential gearbox with custom gear ratios stuffed with an RPS Triple Disc Carbon Clutch kit. The rear differential area now houses a Drive Shaft Shop 9-inch rear end with a Wavetrac Limited Slip Differential that turns a pair of Drive Shaft Shop Pro Level Axles mated to billet wheel hubs. 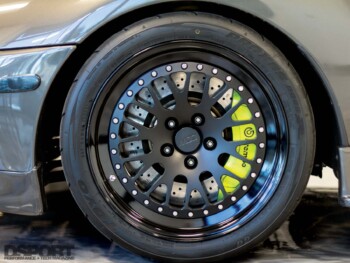 Rotational forces run through the CCW Classic wheels that run through Mickey Thompson ET Street SS tires in the rear and Toyo R888s in the front. Stopping prowess is enhanced with a custom combination of 6-pot and 8-pot Brembo brake calipers that clamp EBC Red brake pads against another custom combination of cross-drilled rotors. Other handling-improving components include a set of Whiteline solid bushings and Powerhouse Racing solid engine, differential and subframe mounting gear. In the cabin, a Titan Motorsports Roll Bar serves both chassis-stiffening and safety-providing duties for the 9-second Club member. Additional safety equipment comes in the form of a pair of Recaro Sportster seats atop Bride MO seat brackets and Takata multipoint harnesses. 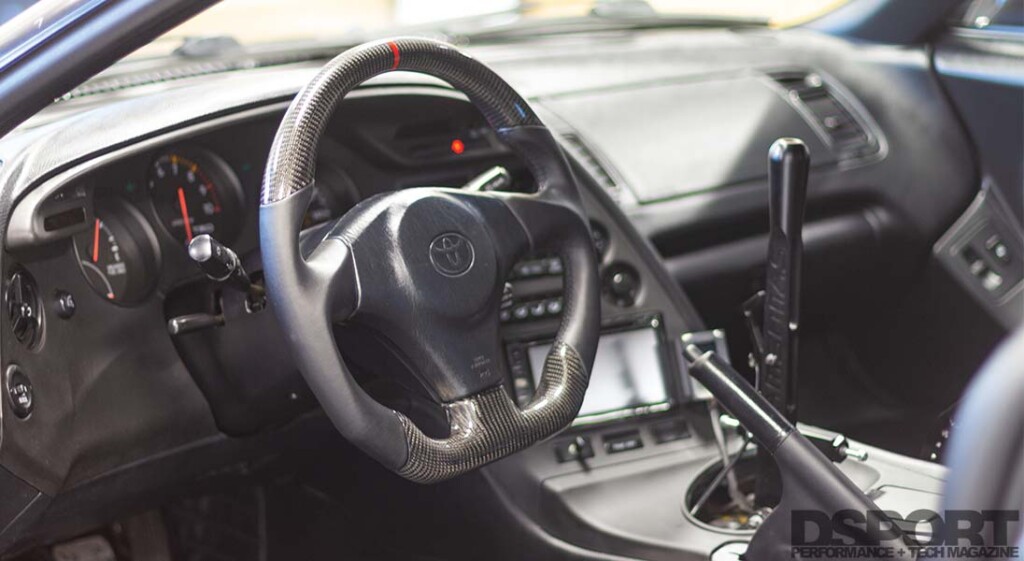 Burrell’s infatuation with the MKIV Supra platform began over two decades ago so it’s fitting that “showroom stock restomod” is the aesthetic that informs the exterior. Consisting of only a TRD hood, Shine Auto carbon side skirts and Shine Auto/TRD Rear Spoiler as add-ons, the familiar lines of the remaining stock body panels are covered in Burrell’s favorite Supra colorway – 1A1 Anthracite. The marque’s history and legendary history of being a near-perfect example of the “import muscle car” do the rest of the heavy lifting when Burrell’s car is displayed and shown on its off-track days. “Everything I have done has been my own vision,” Burrell remarks. “I get to drive my vision of the perfect street Supra.” 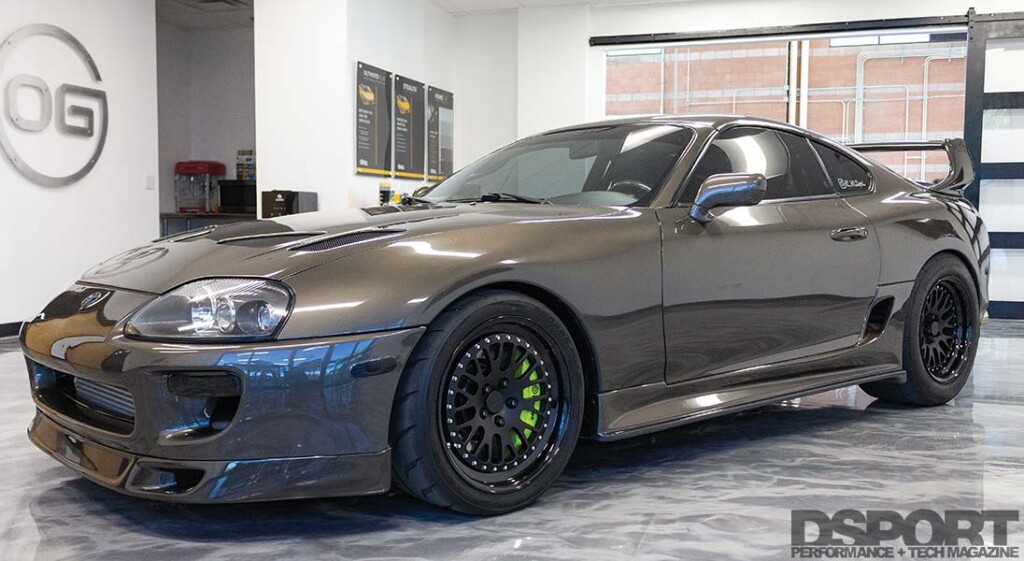 In this day and age, a show-quality MKIV Supra can’t just be a carpet queen or have a handful of go-fast goodies with no timeslips to confirm the implied “supercar status” swagger. Burrell’s Supra keeps the tradition of the mark reigning at the top of the food chain.

Low key, streetable, unassuming. These traits exemplify the sleepers on the street. Taking on a no nonsense approach to tuning...