After the Godzilla era of the R32, R33, and R34 GT-R, we didn’t know how Nissan could keep that momentum. When the R35 GT-R was introduced, it didn’t look like that momentum was going to be continued. The R35 was bigger, heavier, and sporting a completely new engine, technology, and design. Over the past 12 years, the R35 GT-R not only proved to be a great platform to carry the GT-R name, it also proved to reach astronomical heights never reached before by its predecessors. When Bradley Jepson bought his R35 GT-R in 2016, these platforms were already running 7-seconds consistently. Bradley didn’t just want to catch up, he wanted to compete with the best and become the best.

Coming from building and racing EVOs, Bradley knew the R35 GT-R is the next level up. “I knew the GT-R would be a great platform to use for drag racing due to its advanced all-wheel drive system,” said Bradley. Bradley found this red R35 on Autotrader for $48,000. “This was a really good deal at the time.” The previous owner was in medical school and needed the money to pay off his student loan and prepare to get married. “I flew to Miami with a check for the GT-R. He let me drive it and take it overnight, then the next day I drove back to his house and gave him the check,” said Bradley. Just like that Bradley owned his dream car. He flew back to Utah where he lives and transported the GT-R back home. “I knew this would be a great addition to our shop and would allow us to help other people with their GT-Rs to reach their goals in drag racing and road racing.” It was time Bradley set the plans for the GT-R and started representing the shop’s expertise in this platform. 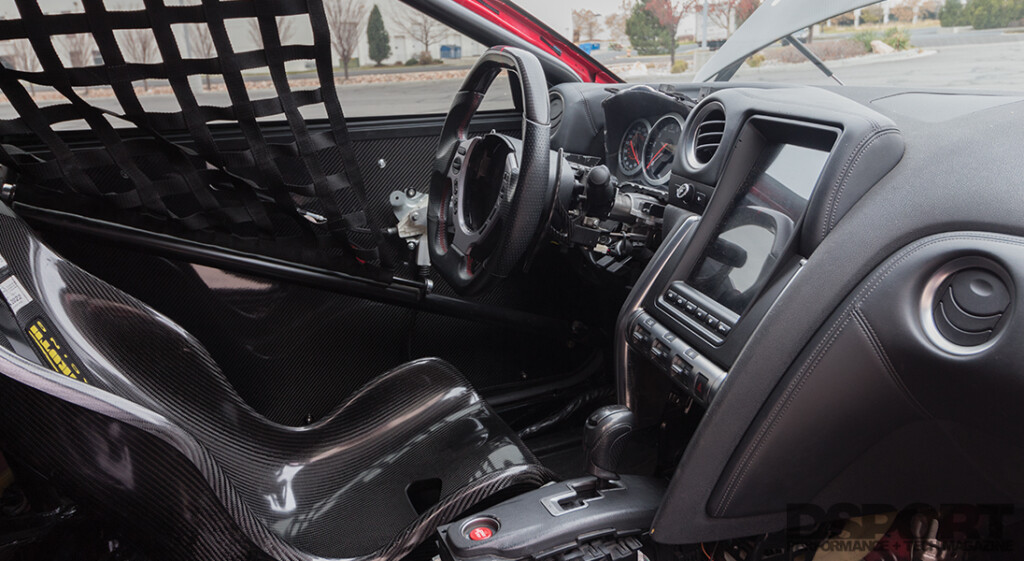 Upon acquiring the GT-R, Bradley loved its acceleration from a dead stop. He quickly realized this car will do great things on the strip. “The traction was unbelievable and smooth compared to any other all-wheel drive car I’ve driven,” said Bradley. He loved the sound of the engine and exhaust, which made the experience and the motivation at an all-time high. “The grey seats that came with it were hideous, so I had to quickly change them for black seats,” Bradley remembers. With the driving impression and small flaws behind him, it was time Bradley set a solid plan for his R35 GT-R before putting it to the test in front of the world. 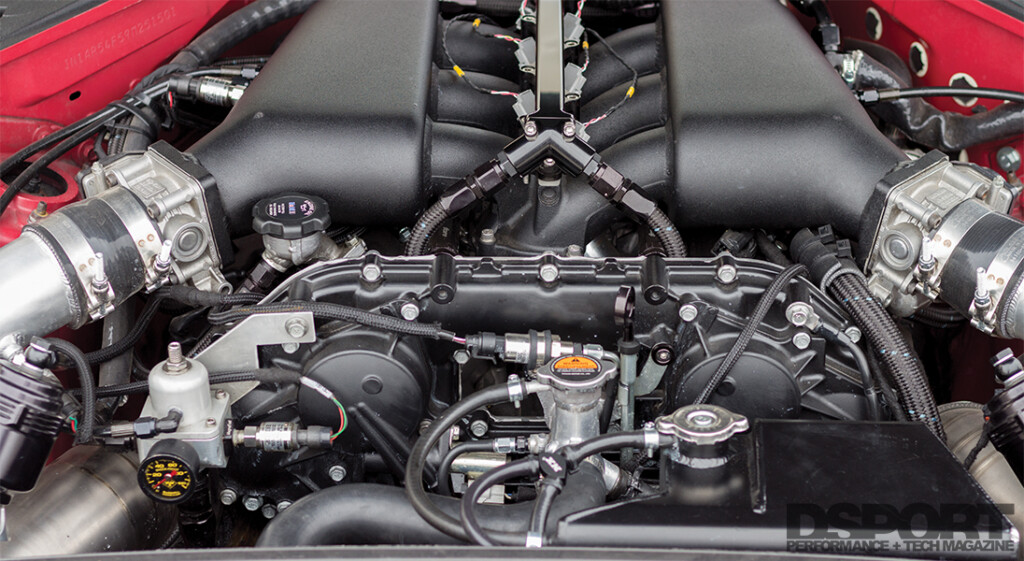 Plans are made to be changed, and evolution is key when building a car. Bradley started with the goal of building a 10-second R35 GT-R. With an upgraded transmission and bolt-ons with a flex fuel tune, the GT-R easily ran 10-seconds. That’s when the hunt for more power started. Discouraged to pull out the engine to upgrade the turbochargers, Bradley decided to go the nitrous route. He installed a custom wet nitrous kit on the car, starting with a 75-shot that evolved into a 300 shot. With the nitrous, the car broke the stock turbo record of 9.28-seconds at 149 mph. The hunt continued after breaking into the 10-second, then the 9-second barriers. The next milestone would require the building of the engine, however. The plan became to run in the 8s and Bradley made his peace with pulling the engine out and chasing his dreams. 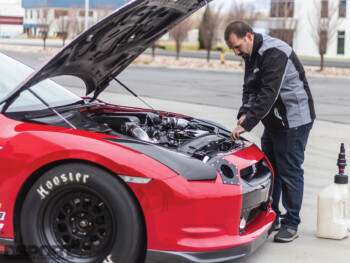 “We built my stock crankshaft engine and did a 62mm Virtual Works turbo kit,” said Bradley. The result was an 8.2-second pass at 177 mph on the very first race. This was done on the stock ECU with a Cobb Accessport tune by Rob Harper. Bradley decided to go with a standalone ECU in order to achieve better traction control and race the car safely at different elevations. A MoTec M150 standalone ECU was installed running with the same engine setup and an upgraded tune. The result was 7.80-seconds at 180 mph in Arizona on the very first pass. “For a whole year after, I was able to achieve 7-seconds every single pass we ran on the track,” said Bradley. The car ran in the 7s for an entire year and it was time Bradley upgraded the turbos to reach the next level. A pair of Precision 6785 turbochargers with an upgraded Callies billet crankshaft changed the number on the time slip to 7.46-seconds at 192 mph. “We got kicked out of Las Vegas Motor Speedway for going too fast with the 8.50 cage,” Bradley remembers. Running 7.4- to 7.5-seconds for another year officially put Bradley and his GT-R into the big league amongst some of the quickest R35s in the world. 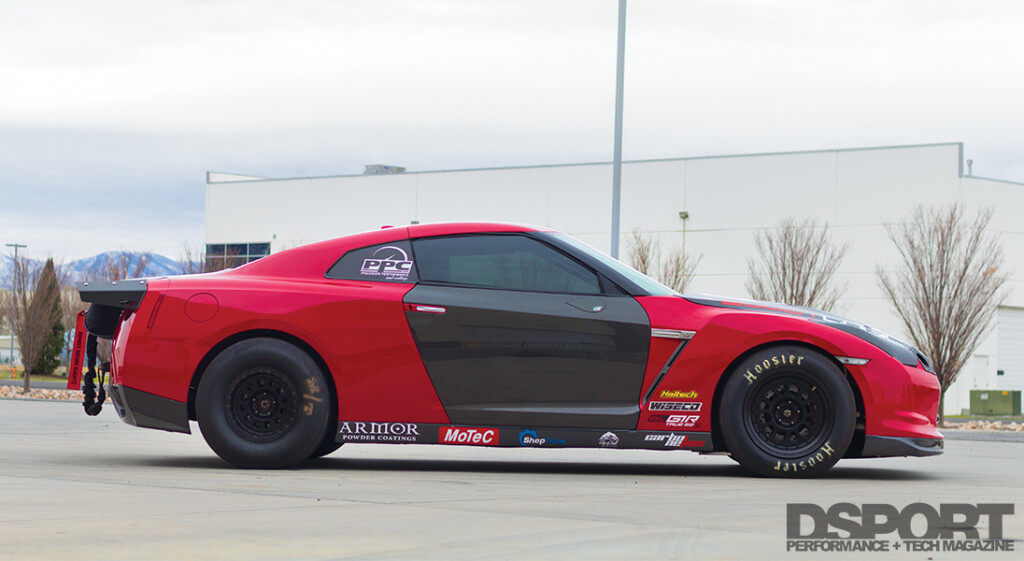 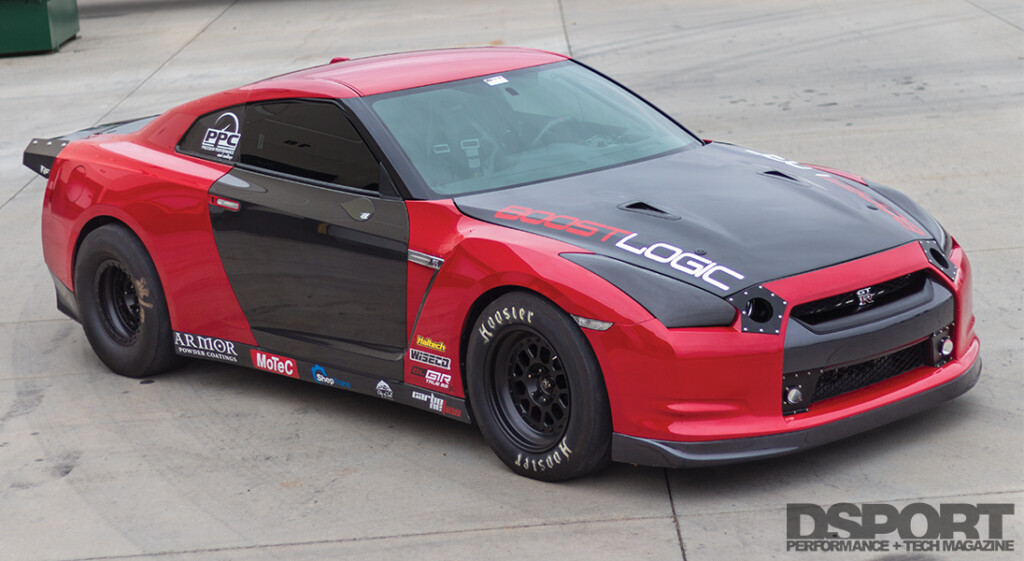 Takeover in the Making

With the car running low 7-seconds consistently and pushing 2,008whp, Bradley decided to upgrade the engine with Fire Rings to handle the horsepower safely run after run. “We are also upgrading the head studs to Boost Logic and modifying the cylinder heads to prevent cracking under high pressure,” said Bradley. Finally, in preparation for TX2k, Bradley will be switching from E98 to M5 methanol fuel. With the car pushing over 2,000whp and weighing just 3,130-pounds, quite possibly the lightest R35 GT-R in the world, the sky is the limit for Bradley and his car. The journey of this GT-R is the perfect road map for any car enthusiast. This project proves that building a car is a constant evolution. You have to set milestones in order to reach the finish line correctly. It’s safe to say Bradley did it right, and fortunately, he never got stuck at a single milestone for too long. The question is, when will this car get in the 6-seconds already?