Japan’s twisting mountain roads are famous for being the birthplace of drifting, long before the days of professional drifting competitions. Back then, drivers favored balanced lightweight platforms over outright power. This ethos inspired the Team Toyo Tires Drift/Trust Racing to collaborate on a Toyota 86 drift demo car.

Just like the cars that pioneered the early days of drifting, the GReddy 86 has shown its propensity for sliding around Japan’s mountain passes. Toyota’s engineers deliberately channeled the original AE86’s character when designing the new 86, giving it plenty of pedigree. Just like its predecessor, the GReddy 86 has proven itself on the mountains of Japan, especially in the Hakone Turnpike drift video, which the team considers to be the car’s crowning highlight. Events like the Hakone Turnpike drift dictated the GT86 build, showcasing the company’s development of the popular ZN6 platform. 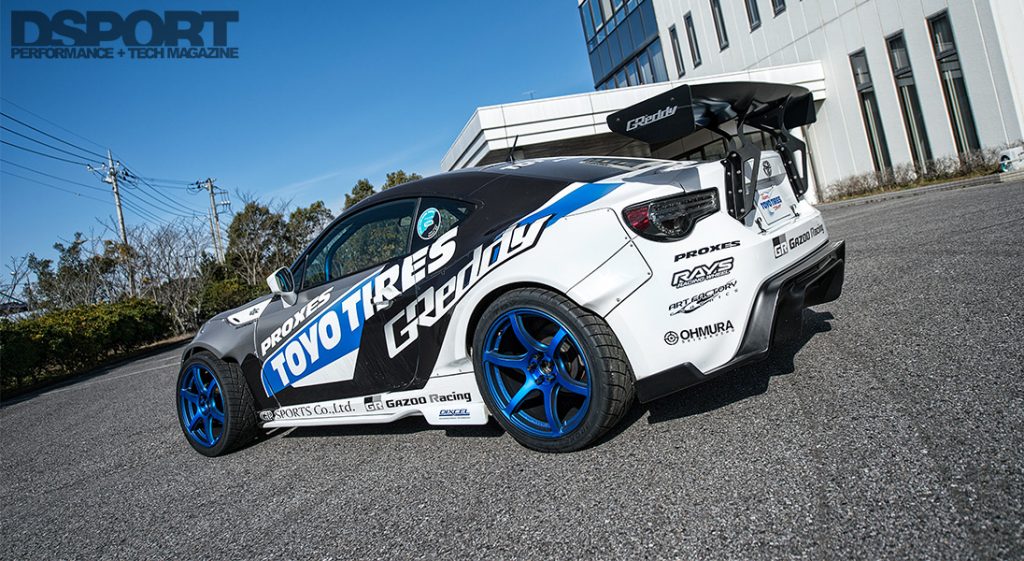 To look the part and stand out during its demonstration events, the GReddy 86 implements a host of changes that are not only visual, but also aid the car’s ability to drift. With factory body lines accentuated by a full Rocket Bunny V1 widebody aero kit and front tires sticking out past the fenders, the GReddy 86’s stance is far more aggressive than the factory setup. The bolt-on over fenders cover the expanded front track width provided from the modified steering kit, as well as the wide tires in the rear. A Rocket Bunny front lip spoiler, side skirts and rear diffuser add downforce and visual flair, as does the tall GT-style rear wing. The widebody aero isn’t just for looks, either. Stability from the extra width helps the 86 maintain its composure, especially while at full lock. 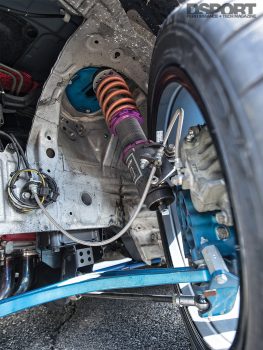 The next place to look was the car’s steering, one of the most distinguishing features of the build. Modern drift cars gain enough angle to necessitate completely revamped steering systems, as factory racks simply cannot control the excessive angles. Enter Wisefab‘s steering angle kit, which raises the GT86’s maximum steering angle up to 62 degrees and optimizes suspension geometry. Furthermore, the Wisefab kit swaps the factory electric power steering system for a traditional hydraulic steering rack, improving feedback and freeing up space in the engine bay to accept a variety of engine swaps. The steering angle kit works with adjustable DG-5 coilovers which provide the ability to cater suspension settings to specific track or road conditions. Completing its distinct style, the car rides on a set of 18-inch RAYS Gram Lights 57C6 wheels, finished in blue to accent the vehicle’s livery. A set of Toyo Proxes R1R tires wrap around the wheels, measuring 225/40R18 in the front and 265/35R18 in the rear, putting the 86’s power to the pavement. Altogether, the chassis changes allow controllable high speed slides which produce thick clouds of smoke during demonstration runs.

Nothing but the Basics

As flashy as the widened 86 may look from the outside, its interior is comparatively void of flair. Aside from the door cards, dashboard and center console, nearly the entire interior of the GT86 has been removed or replaced to save weight. Factory seats were replaced with a pair of Bride ZETA III seats and Sabelt racing harnesses which hold the driver and passenger firmly in place. A Cusco 6-point bolt-in roll cage adds to chassis rigidity, improving handling and safety in the event of a crash. From the driver’s perspective the cockpit is free of clutter, with only a few gauges to monitor, including a GReddy Profec boost controller to regulate maximum boost pressure and an AEM air/fuel ratio gauge to keep the driver in tune with how the engine is running. 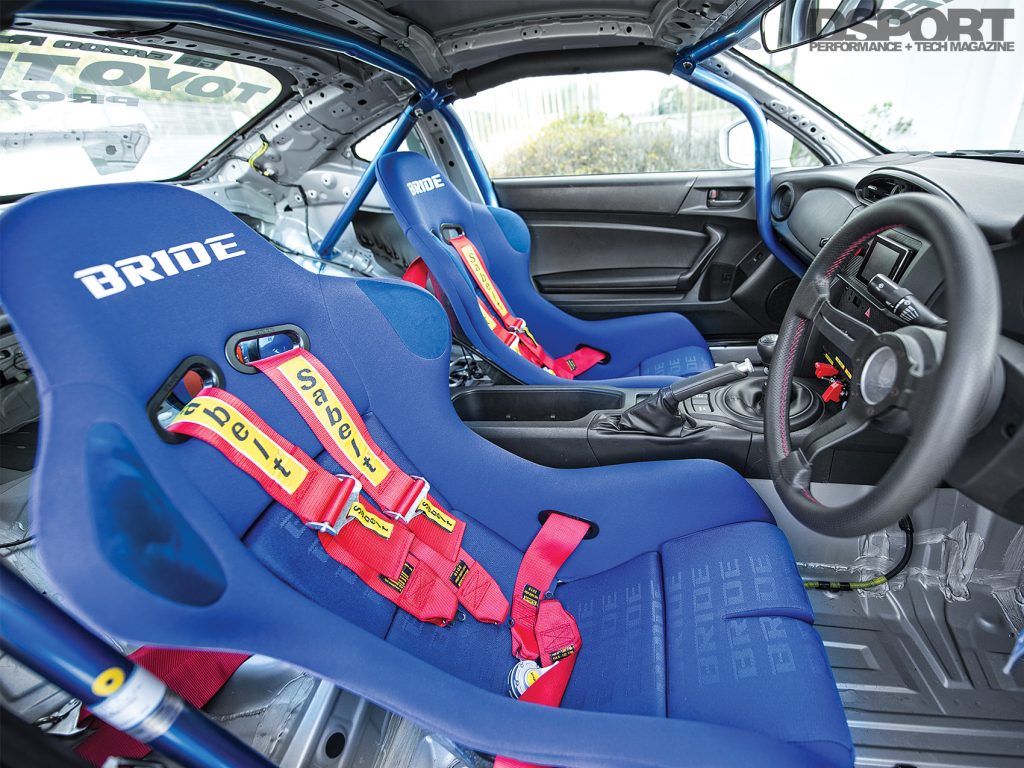 Under the hood, GReddy’s 86 retains its factory FA20 block, albeit heavily modified to produce around three times the standard output. A GReddy stroker kit brings displacement to 2.1 liters, up from the standard 2.0-liter displacement. The stroker kit lowers the car’s compression ratio from 12.5:1 to 9.5:1, preparing the car for GReddy’s turbo kit. Designed with high power and boost in mind, the kit utilizes a billet crankshaft, forged connecting rods and forged aluminum pistons shaped specifically to handle high boost. On the top end of the FA20, headwork remains minimal, as the valvetrain and camshafts are unchanged. However, the intake and exhaust ports have been ported by Trust R&D, maximizing the flow into the combustion chamber. 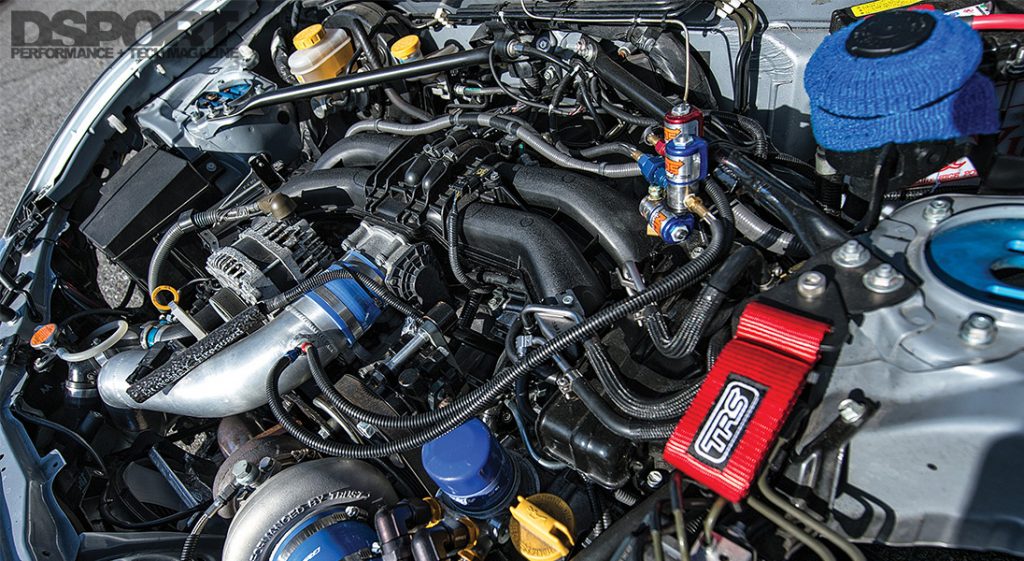 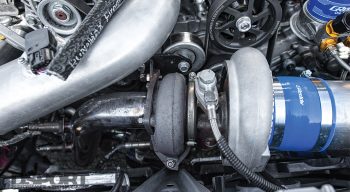 To make its intended power output, GReddy chose to outfit the 86’s naturally aspirated FA20 with a turbocharger. Originally intended to run the modest GReddy T518Z turbo kit, the car now utilizes a much larger TD06SH-25G unit which supplies enough boost to roast the car’s tires at nearly any speed. Exhaust gasses feed the turbo by way of a GReddy SPL exhaust manifold, before exiting through a full SPL exhaust system. A TiAL Sport F38 wastegate keeps the turbocharger from overboosting and potentially damaging the engine. On the cold side, the turbo pulls cool air from the large opening in the front bumper. Intake charge travels through a GReddy intercooler, keeping the incoming air as dense as possible to maximize power.

Making the move from natural aspiration to forced induction necessitates modification of engine tuning parameters, so the GReddy 86 has been outfitted with additional hardware to manage the added boost. Spark delivery and fuel tables are tuned via an EcuTek engine management system, bridging the factory ECU and the added forced induction. With a NOS wet shot nitrous system plumbed into the engine for extra on-demand power, peak power gains are substantial, as the FA20 now puts out 591 horsepower and 495 lb-ft of torque. 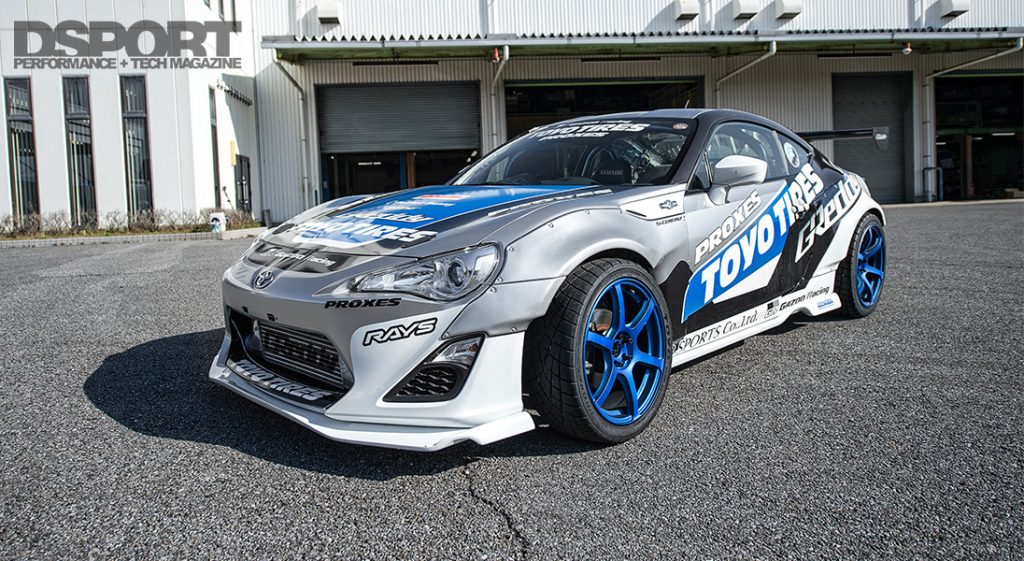 Power to the Ground

Putting the FA20’s improved horsepower to the ground without breaking parts requires more than just the factory driveline, so the GReddy GT86 has been reinforced accordingly. An OS Giken twin-plate clutch contains the engine’s power, transferring it into the built transmission. The factory 6-speed gear set was replaced with a strengthened set from GReddy, eliminating fourth gear’s tendency to fail in high power applications and fortifying the other gears as well. At the back, an OS Giken Super Lock limited slip differential keeps both wheels spinning under power. With these parts, the 86 can spin its tires to its content without having to worry about overpowering its driveline components.

Drift cars have come a long way since the early days of sliding up and down Japan’s mountain passes. The GReddy 86 shows just how evolved a serious drift project can become, especially when compared to the small coupes from which the car bears its name. Just like the 86s of old, however, the keys to a successful drift machine still include many of the same attributes like a competent chassis with low weight, precise steering and the handling balance to easily control a drift. The GReddy 86 achieves all of this with room to spare, making it a true successor to its nameplate.

Just like we see new YouTube stars popping up every year, there used to be a time in the late...