Airstrips and long tracks have become the playground for high-powered machines putting down well over 1,000 horsepower to the pavement. According to 6speedonline.com’s standing mile list, even factory supercars produce some serious trap speeds. The Corvette ZR1 (184 mph), Corvette C6 Z06 (171 mph), Porsche 997 Turbo (171 mph) and Porsche 996 Turbo (165 mph) utilize every inch of that mile of pavement to reach these figures. Now imagine reaching 187.34 mph in half the distance with only four cylinders? 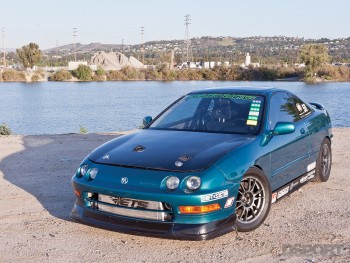 In the early 90s, Acura never really considered or cared about whether consumers knew how fast its second-generation DC2 Integra GS-R could go. Today, this 20- year-old four-cylinder hatchback continues to have a solid following in the quartermile drag racing arena but little representation at top speed, which makes this particular Integra all the more remarkable for its accomplishments.

This 1994 Integra GS-R wasn’t Myles Kerr’s first Honda, but it’s his most poignant. The English Racing Shop Manager purchased this DC2 in 2006 from its original owner in factory condition. Soon after, the then 12-year-old GS-R rapidly evolved. “The first thing I wanted to do was run 12-second quarter miles on street tires,” Kerr explained. After achieving this goal, his thirst to go any faster had been quenched for all of about three days. This led to Kerr dropping a built engine with a larger turbo into the chassis, putting down 690 horsepower to the wheels. This setup took him down the drag strip in 10.1-seconds at 151 mph. 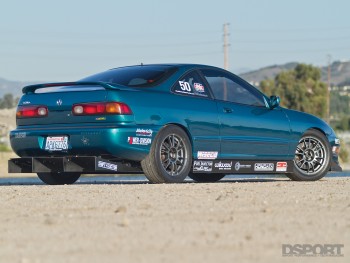 Extracting nearly 700 horsepower and scorching the drag strip in a car that originally produced just over 150 horsepower seemed like a respectable point to conclude a build. But Kerr merely set his sights even higher. The mounting popularity of standing half-mile events presented a new venue and standard to pursue. But unlike the quarter-mile, the potential for even greater top speed made aerodynamics all the more critical for both performance and safety. His new goal was to reach 190 mph.