Racers and gearheads around the world are familiar with most incarnations of the Mitsubishi Lancer Evolution, or EVO as it is colloquially known. From the “Galant VR4 in Lancer clothing” EVO I to the sunset release of the EVO X, this potent platform kicked ass and took names in the manufacturer series race in which the car qualified to participate. Modified versions of every generation permeated the racing and performance tuning scenes, making “EVO” a household word and the shorthand for any variations of the turbocharged, all-wheel drive sport sedan that was equally comfortable on the hot asphalt and concrete curves as it was on the dusty mountainside climbs and four-wheel sliding field and forest rally runs.

Carson, California resident Jeff Velazquez was well-versed in all things EVO. As the former proprietor of an EVO performance specialty shop, he had laid hands on all manner of the Mitsubishi sedan, but it was the unexpected sight of the limited-production EVO in a five-door wagon configuration that, at first, puzzled him but ultimately prompted him to hit “Buy It Now.” “I figured it would be a good shop vehicle,” Velazquez explains. “Also, the wagon was rare and I had never seen one until I saw the For Sale post.” Still, the build path was not as obvious as it might have seemed; given that the GT Wagon was essentially a right-hand-drive version of the EVO IX that had innumerable paths and performance levels to choose from, albeit with a little extra mass tacked on the backside, Velazquez’ plan was initially simple enough. “I told myself I was going to just do a built engine and a five-speed swap (from the factory six-speed manual transmission)”, Velazquez states. “Well, one thing led to another and I ended up losing control and going all out on the project. I told myself since I was there already I might as well upgrade everything.”

The engine upgrade seems to have been the beginning of the performance-upgrade snowball. It started with an RPM-spec 2.2 long-rod engine, built by Velazquez’ shop Raw Power Motor Works. At the core, a Manley 94mm billet crankshaft engages Manley 156 mm I-beam connecting rods to motivate the Manley 9.0-to-1 compression pistons. ACL race bearings now sit in the locations where the stock main, rod and thrust bearings once occupied. 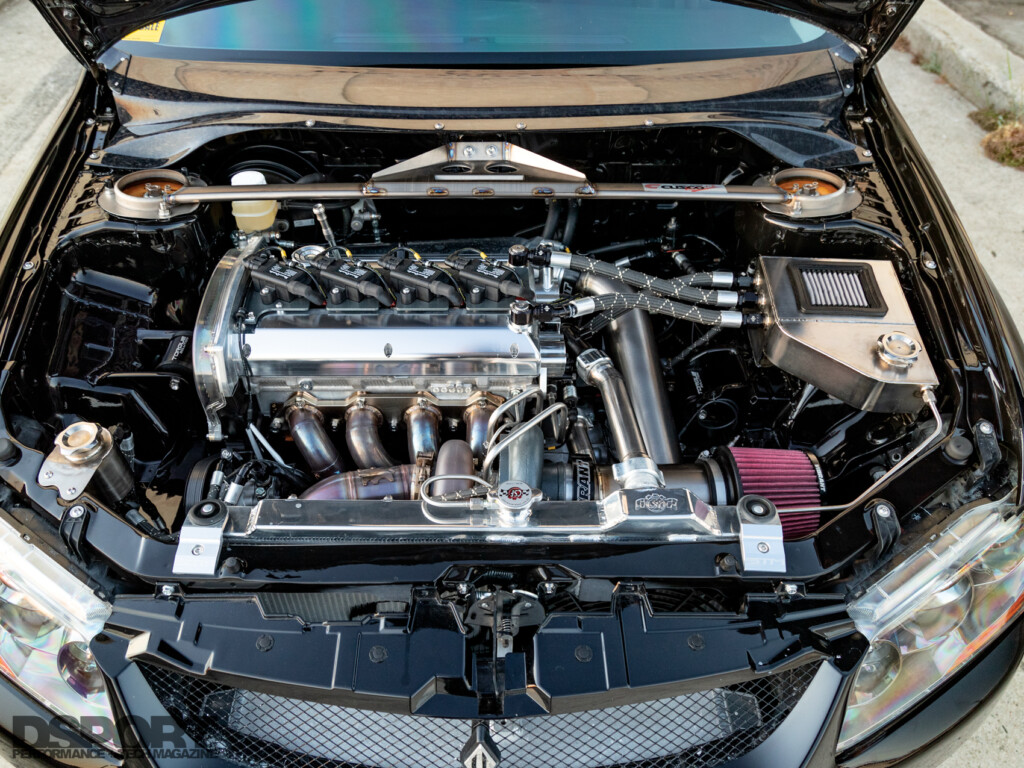 While the factory 4G63 motivator is equipped with a potent turbocharger from the factory, it does have its limitations when horsepower goes up and reliability at extreme power levels becomes a necessity. To that end Velazquez revamped the entire pressurized air intake system. The factory Mitsubishi turbocharger was sent to the parts bin by the new Xona Rotor 9569s turbocharger wearing an X4C compressor housing; the staggered fin design allows for speedy boost response and reliable top-end boost characteristics. RPM-spec oil and coolant hard lines to the boost unit eschew steel-braided hosing, keeping the engine bay clean and adding countless hours of labor to the build. The 9569s sits atop a customized BS Fab top mount kit that exits through a traditional downpipe and exhaust system instead of through the hood. TiAL wastegate and blow-off valve units help control and stabilize boost pressures, while the massive 6-inch ETS intercooler and its titanium plumbing cool the pressurized intake air before it enters the combustion chamber.

The job of putting all the newfound and potential power down to the ground to motivate the wagon forward belonged to the drivetrain system. While the stout factory EVO six-speed drivetrain had been used with good effect previously, Velazquez’ performance goals called for something better. Initially, a tried-and-tested EVO five-speed transmission was on the drawing board, but as the build progressed beyond original expectations, Velazquez went the way of the Drenth five-speed sequential unit. This all-business transmission mates with a Tilton carbon ceramic twin-disk clutch and works in conjunction with a TRE race-prepped transfer case and cooler, Wavetrac center differential, and TRE race-prepped rear differential. The Driveshaft Shop provides the equipment in the driveshaft and axle areas.

Taking the assist from the drivetrain upgrades, the rolling stock upgrades literally complete the transfer of power from engine to asphalt. Robi-spec Ohlins coilovers support the wagon’s corners and modified subframe. A host of Whiteline sway bar and race-alignment components provide adjustability and tunability to the CT9W platform. A set of STM lightweight drag brakes scrub away unnecessary speed, with a custom drag staging brake thrown in for future track endeavors. The final piece of the power transmission comes down to the Volk TE37SL wheels wrapped in M&H Race Master drag radials.

For the ultimate example of function as fashion, the wagon wears a slew of forged carbon fiber parts including the front lip, vented fenders, side skirt extensions, rear bumper extension and custom drag wing; these were all forged by Carbonetics from Velazquez’ input. All other body parts wear the factory Mitsubishi-spec black paint, leaving the forged carbon bits for the trained and learned eyes to notice. 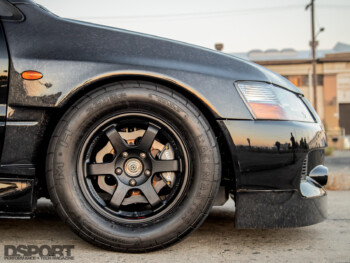 “If I had to do it all over again,” Velazquez relates, “I would do it exactly the same. I don’t think the build could have been done any better than it currently is; nice and subtle on the outside and crazy on the inside once you pop the hood.” As the detailed and borderline-perfectionist build took over three years to come to fruition, Velazquez concrete plans for the future don’t go much further than “cruising in it now and tracking it when it’s dialed-in.” For now the built wagon remains a visual standout amongst the fleet of EVO sedans around the world.