The famous slogan, “In a world of compromise, some men don’t” is an apt maxim to describe the perseverance needed to attain one’s ambitions. Far too often, compromises and concessions force people off track from their ultimate goal. Whether it’s career aspirations or a car build, issues such as availability, money and opinsions get in the way for many people, preventing them from achieving their objectives. Text by Richard Fong // Photos by Michael Ferrara 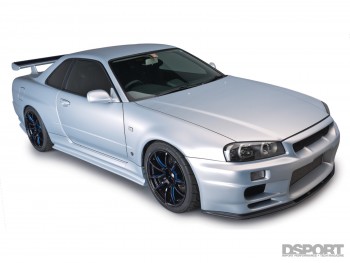 Ashton Makenzie agrees with the motto above. “I always set my goals high for my project car builds,” he said. “For my current project, I wanted a car to be reliable, even when taking long road trips, while retaining all of the factory amenities. I don’t compromise on items like air conditioning and power steering, and I won’t allow obstacles to change my build path. My ‘ultimate’ streetcar had to look the part, in addition to having the power to back its aggressive appearance.” 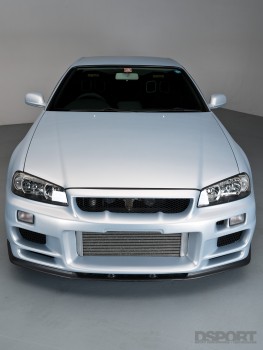 Having a good idea how the build will go is one thing, deciding which platform to construct upon is another. “I’ve always liked the body lines and capabilities of Nissan’s R34 Skyline GT-R. I was inspired by the Mines R34 Skyline GT-R from Japan. I felt that they did a great job with that car. It moved like hell in whatever direction it pointed, and it sounded like a pissed-off, Japanese-built Ferrari the entire time doing it. I wanted to build a car that did the same thing, but assembled to my own taste and with a different selection of parts,” Makenzie stated. “Knowing how well they take to modifications, I began searching for one with the intent to make it the ultimate streetcar. But since Nissan never officially imported these cars, they are exceptionally rare in the U.S., and finding one in pristine condition proved a challenge. I finally found this gem a few years ago. It had low mileage and no modifications, which is exactly what I was looking for.”
Pages: 1 2 3 4
On February 20, 2014