Inspired by high horsepower rally machines of the 1980s and early 1990s, the battle between the Mitsubishi Lancer Evolution and Subaru WRX STI carried on for over a full decade. Both platforms kicked off in the early 1990s, sporting turbocharged four-cylinder engines sending nearly 300 horsepower through an AWD drivetrain. When one model raised the performance bar, the other would bite back with another round of updates. The battle raged on through the cars’ introductions to the United States until 2015, when Mitsubishi was forced to pull the plug on the EVO brand. Although the EVO name came to its end, the enthusiast following continues as strong as ever. 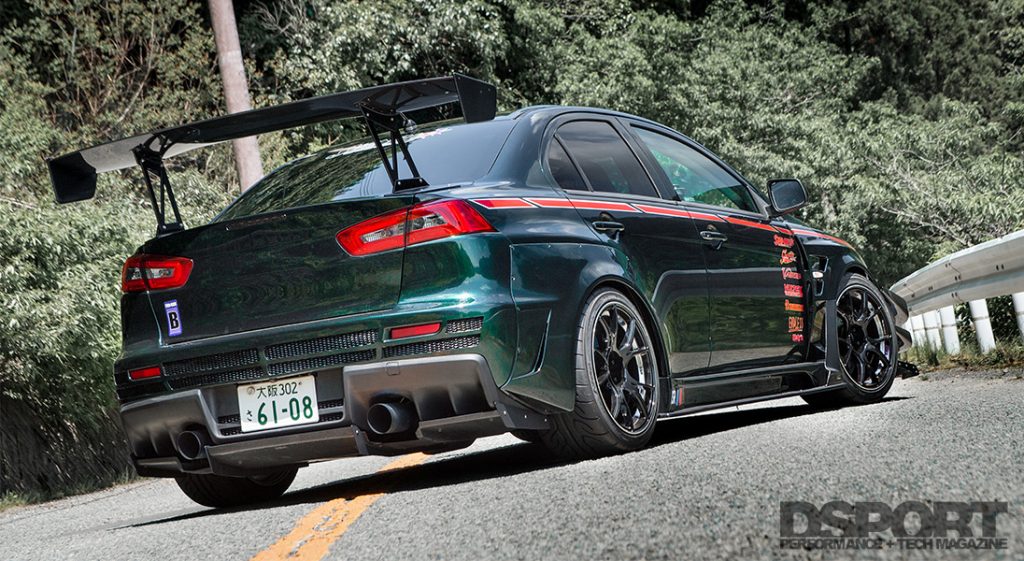 In November of 2011, Sou Okutani was hungry for a car that he could track on a regular basis. With an interest in nothing other than an all-wheel-drive platform, his options narrowed to the two rally-inspired rivals. His liking toward the looks and 4B11T power plant of the 2008 EVO X won him over. Although the car would become his daily driver, he set a focus on making his EVO track-worthy, which required a series of upgrades to improve the car’s performance around the corners. To this end, he brought it to Signal Auto located in Minoh, of the Osaka Prefecture. 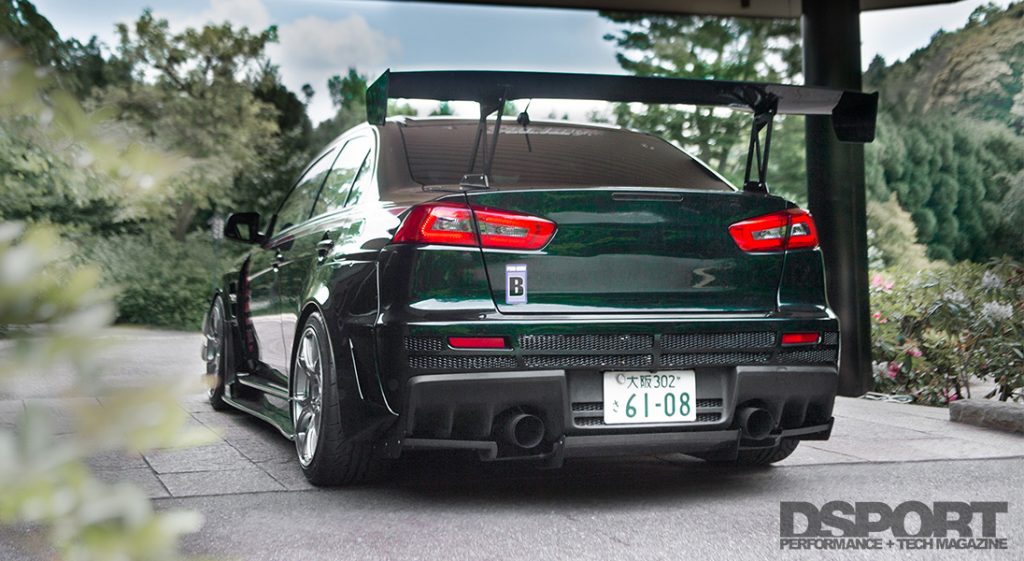 Leave It to the Pros

The Signal name is likely familiar to many, as it is responsible for multiple builds that received high recognition in motorsports, car shows, and magazines all over. Longtime DSPORT fans may even recall the first Signal Auto car we featured way back in Issue #22, a 900 horsepower R34 Skyline GT-R. Kousuke “MAD” Kida first started Signal in 1977, but what first started as a small shop has since taken off in popularity. The company went on to expand its reach when it opened new locations in both Thailand and Torrance, California. It specializes in nearly every type of automotive work you can think of, from accident repairs to fabrication, parts installation and car tuning. Its popularity has only increased as enthusiasts began to notice Signal’s involvement in Formula Drift and numerous street performance builds. Given the company’s strong background and wealth of experience, Okutani found them fit to piece together and set up his EVO X. 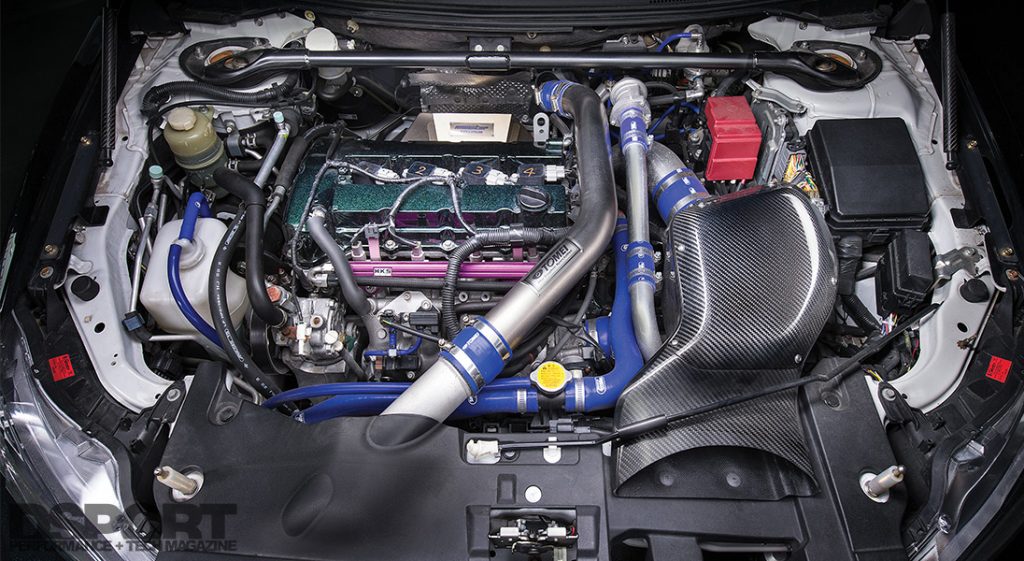 Okutani’s desire to put the car on racing circuits led him to only minor power upgrades, as the chassis’ handling capabilities would take priority. To this end, Signal left most of the engine internals alone and primarily focused on bolt-on components. The induction box kit with TOMEI Powered aluminum piping pairs with an uprated GCG TF06-07 turbine wheel in the turbocharger to feed air into the JUN Big Throttle Body. TOMEI Powered’s PONCAM Kit and reinforced valve springs improve valve lift and duration to optimize air flow into the cylinders. 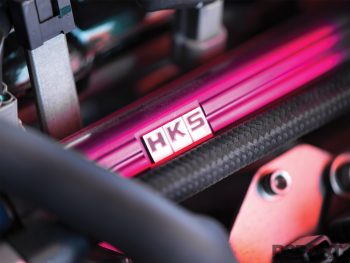 In order to match the additional intake air, an HKS Fuel Upgrade Kit with 980cc injectors, a high flow fuel pump, and fuel rail delivers the necessary fuel. An HKS F-CON V Pro manages the fuel and ignition components, while a Trust GReddy Electronic Boost Controller keeps the pressure under control. In order to free horsepower and make some noise, exhaust escapes by way of a factory manifold and TOMEI Powered downpipe from the turbo. The three-inch diameter pipe sends the exhaust gases through the SARD Sports Catalyzer and out of the Unlimited Works Titanium Muffler.

Given the heat generated by the power-making components as well as the potential time spent on track, the staff at Signal Auto reworked and added to the cooling system. Behind the front bumper, an ARC aluminum radiator keeps coolant temperatures down while the front-mount intercooler charges the intake air for more power. An HKS oil cooler adds an additional means to keeping the engine internals at a healthy temperature. At the back of the motor, a Monster Titanium Exhaust Manifold Shield keeps the heat from spreading throughout the engine bay.

The combination of these components and Signal Auto’s tuning parameters raised the EVO X’s power levels to help trim lap times significantly. The result is 403 horsepower and 378 lb-ft of torque laid down through all four wheels. With the rev limiter set to approximately 8,200 RPM, the 4B11T winds up for later gear changes and more time in the power band. 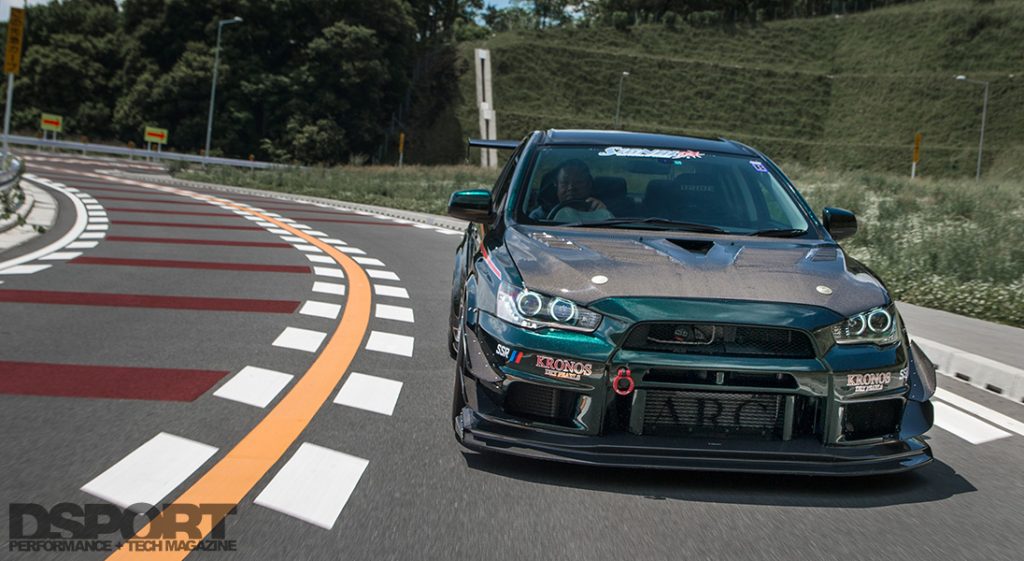 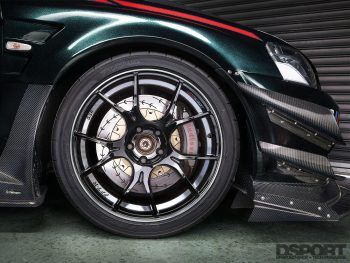 Okutani’s original plan for the EVO X was to only raise its power ability and dress up the exterior, but goals quickly changed. Driving on track after the engine upgrades brought the realization that the car required new braking and handling hardware to match the power. Without updates to these components, he found the car difficult and even dangerous to throw around a race track. The first step was to swap out the factory dampers and springs for a set of Öhlins coilovers with 370psi front springs and 320psi rear springs. The improved damping characteristics enabled the benefits of a Cusco front stabilizer bar to stiffen the chassis and improve responsiveness. With the help of 18×10.5-inch SSR GTX02 wheels wrapped in 265/30R18 Advan Neova tires AD08 R tires, the EVO realized a massive improvement in its cornering ability.

On the track, Okutani also discovered that the EVO X’s factory braking system wasn’t up to the task of repeated hard-driven laps. The high temperatures quickly heated the pads and rotors, revealing a need for more capable hardware. To this end, the Signal Auto staff employed a set of Endless MONO six-piston front calipers and four piston rears. Endless heat-treated carbon steel, slotted rotors filled in all four corners. The unique E-Slit design of the rotors provide a smoother shaving of the brake pad with increased friction, helping maintain consistent braking characteristics and improved wear. 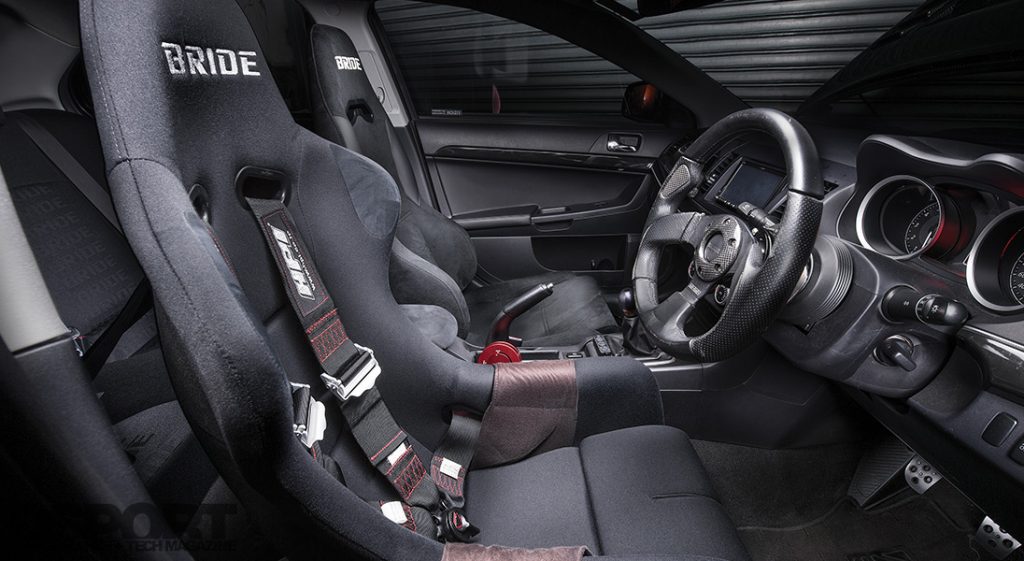 Although this EVO X would serve as a street car, Okutani chose to give it the full track car treatment in interior functionality and exterior aero components. Bride racing seats with HPI four-point racing harnesses fill in the front of the cabin, while a custom-wrapped Bride bench seat occupies the back for passengers. When pushing the car’s limits, Okutani has a series of Defi Meter gauges spanning across the dash to deliver important data. An HKS Circuit Attack Counter lies in the center of the dash, providing essential track timing information like speeds and lap times.

On the outside, the EVO X stands out with its ultra-deep shade of KRONOS green with a black base, created and painted by Signal’s SHOW UP brand. Adding to the car’s uniquely good looks, Varis headlights and taillights sit fore and aft for night driving. Keeping in tune with track-focused upgrades and street aesthetics, the car also took to a Varis wide body kit, carbon dual canard, carbon hood, and rear diffuser. These items work together with the Voltex GT-Wing to create downforce that lends to aerodynamic grip around the circuit bends. 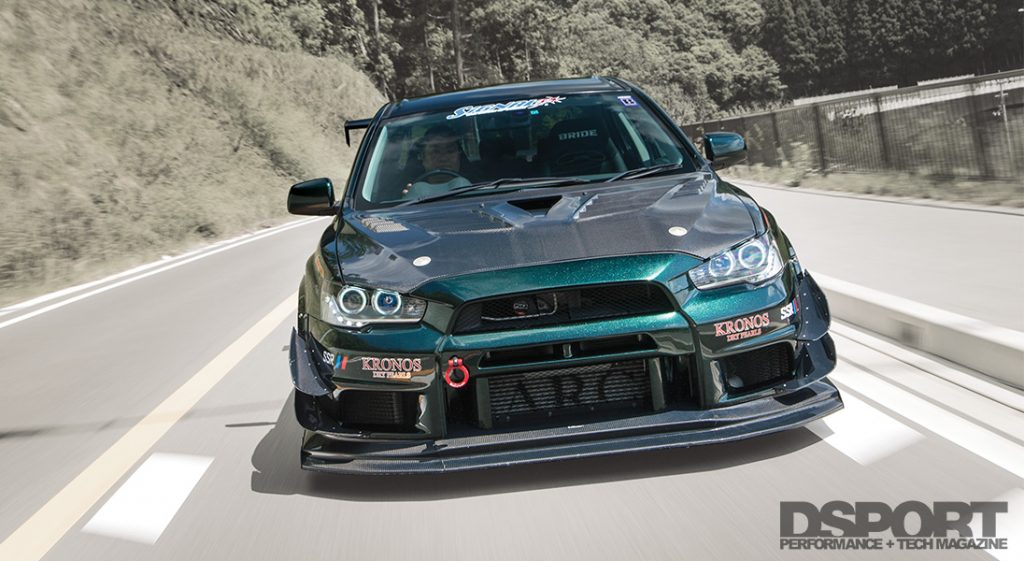 Where Are They Now?

Following the updates to the EVO X’s suspension and braking, Sou Okutani found the car much more drivable at speed and around corners. At this point, he considers the car nearly perfectly aligned with what he hoped it would be, thanks to Signal Auto’s help. It serves as a prime example of a car that’s show-ready but hardly a trailer queen, as he not only daily drives this EVO but attacks corners on the circuit as well. Now that Okutani finds himself able to control the car with confidence, he believes it’s time to dig into the engine for more power. We look forward to seeing where he takes the build next.