Most automotive and racing enthusiasts are a rare and misunderstood breed. Many of which would happily tear out heated leather seats and sound deadening materials if the result is better lap times. There’s no need for a stereo, as a performance exhaust delivers all the music they could ask for. Air conditioning? No thanks, that just robs power. In order to satisfy the needs of the hardcore track enthusiast and racer, who’s all about going fast on a fair budget, National Auto Sport Association (NASA) partnered with Elan Motorsports Technologies to create the NP01. This prototype-style racecar enters the club racing scene to provide a relatively affordable method of going wheel-to-wheel against fellow competitors on some of the country’s most highly regarded tracks. Text By Cameron Parsons // Photos by Glen Parsons and courtesy of NASA 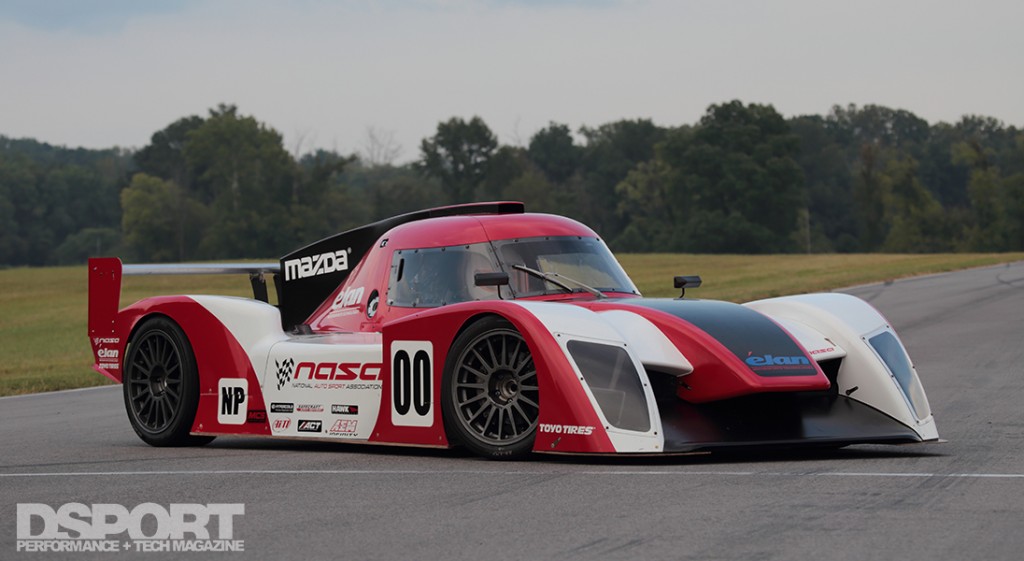 There’s a long list of enthusiasts and racers who would eagerly step into prototype or open wheel racecar in the pro racing ranks, to experience high g-force turns and speeds in excess of 200 MPH. The catch is that in order to achieve this, you better have a lifetime of racing experience and a big bank account before a race team will even consider letting you pilot one of its cars. This is exactly why club racing exists. 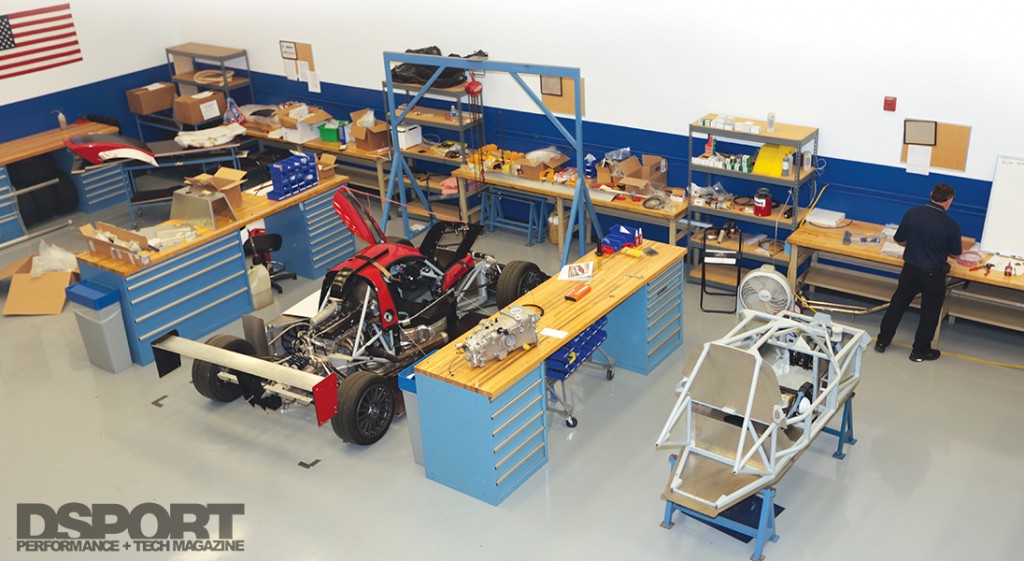 Not everyone has the means or even the desire to compete at the top levels of racing, especially when there are many more affordable alternatives to choose from. Some might think that club racing is reserved for vintage racing has-beens that are out for their last hurrah before checking into the retirement home, but this is hardly the case. The age range of club racers is vast, no doubt, but there are plenty of young guns and millennial gearheads that drive, crew or both. This often calls for a race of youth and enthusiasm against the wise and experienced, both of which are plenty capable of giving many pro racers a serious run for their money. When spending a tenth or less of what the pros throw at their racing efforts, you can’t beat the level of competition and racing excitement for the money. This is where NASA steps in with the NP01.

The NP01 may be NASA’s brainchild, but it was Elan Motorsports Technologies that nurtured this new machine to life. Elan is no stranger to the motorsports world, designing and building some of the most successful racecars in recent years. American Le Mans Series, Le Mans Series, IMSA Prototype Lites, Champ Car and IndyCar are only a few examples of where Elan has left its mark. After decades of building racecars primarily for upper-tier and ladder racing series, Elan introduces the NP01 for club racers and hobbyists for the 2016 season onward.

The fact is, this is one of tens or even hundreds of other types of racecars that you can only enjoy on the track, so why should anyone care about the NP01? First, the car is affordable, at least when compared to other racecars and streetcars of similar performance. Second, the car is low maintenance. The whole idea that Elan and NASA wanted to make clear with the NP01 is that this is a car you can throw in the trailer, tow to the track, drive the most exciting races of your life, have time to host a barbecue and hang out with friends in between sessions, then pack up and go home. Drag racers and road racers alike know that racecars can be finicky and delicate, we drive them hard with the expectation that something is either broken or breaking. The less time we have to spend making repairs, the more time we can spend having fun and working to go faster. 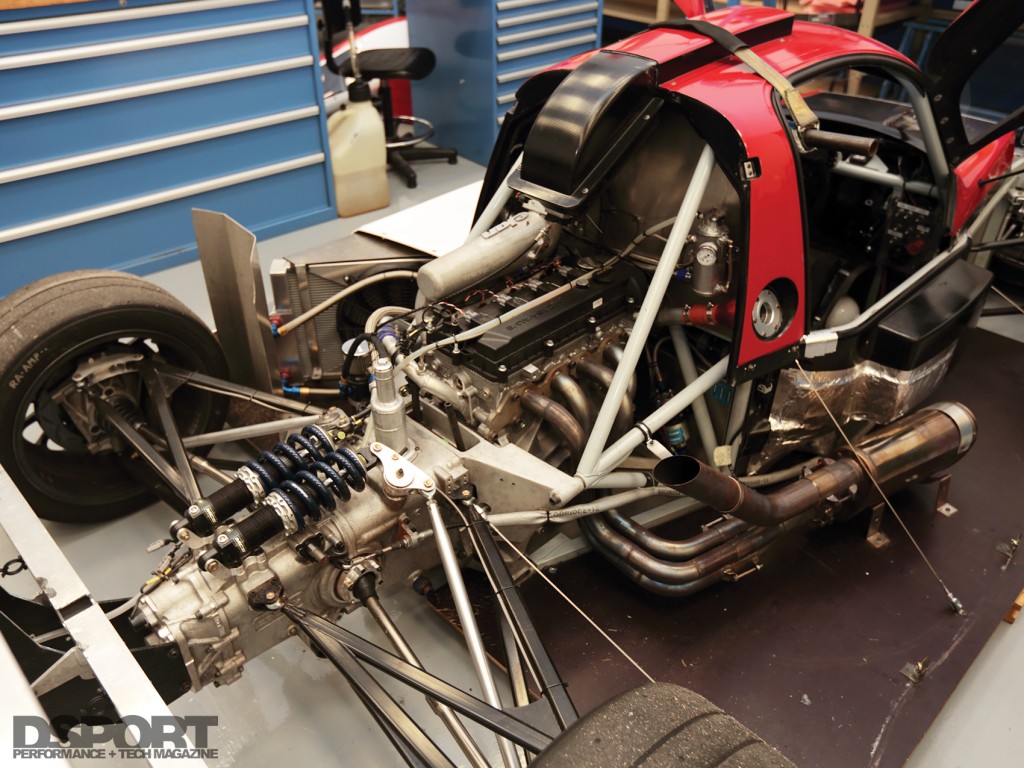 In order to make this a possibility, NASA and Elan overbuilt the hell out of the NP01. The car sits on the scales at 1,450 lbs, so it already will wear less on the brakes and suspension components than your average 3,000 lb streetcar. The four-piston Stoptech forged aluminum calipers squeeze a set of Hawk Performance DTC-60 pads down on four giant 315mm vented brake rotors. The heavy duty, inboard, fully adjustable rocking arm suspension with Motion Control Suspension double adjustable shocks tie the upright bearing units to the chassis. Each of the four corners share components in suspension arms, brake calipers and uprights, this interchangeability keeps owners from having to carry piles of specialty spare parts. Even all four wheels are the same size, wrapped in Toyo Proxes RR tires. These tires, being a harder compound than most racing slicks, both cost less and last longer than most race tires you’d find on formula and prototype cars at most race weekends. Thanks to the NP01’s low weight, the 185 horsepower Mazda 2.0-liter MZR engine with dry sump oiling system is hardly stressed to push the car around the racetrack. The six-speed, no-lift-shift sequential Sadev S75 gearbox is rated for nearly double the horsepower than that of the MZR, so an overworked transmission is hardly a concern. As much as we love carbon fiber, NASA and Elan chose to wrap the car in a fiberglass body for the sake of cost and maintenance. The body is separated into various panels so that a cracked fender won’t require an entirely new body. The NP01 skeleton comprises a 1018 steel tube frame, tig welded with an integral roll cage structure to keep the car stiff and the driver safe. 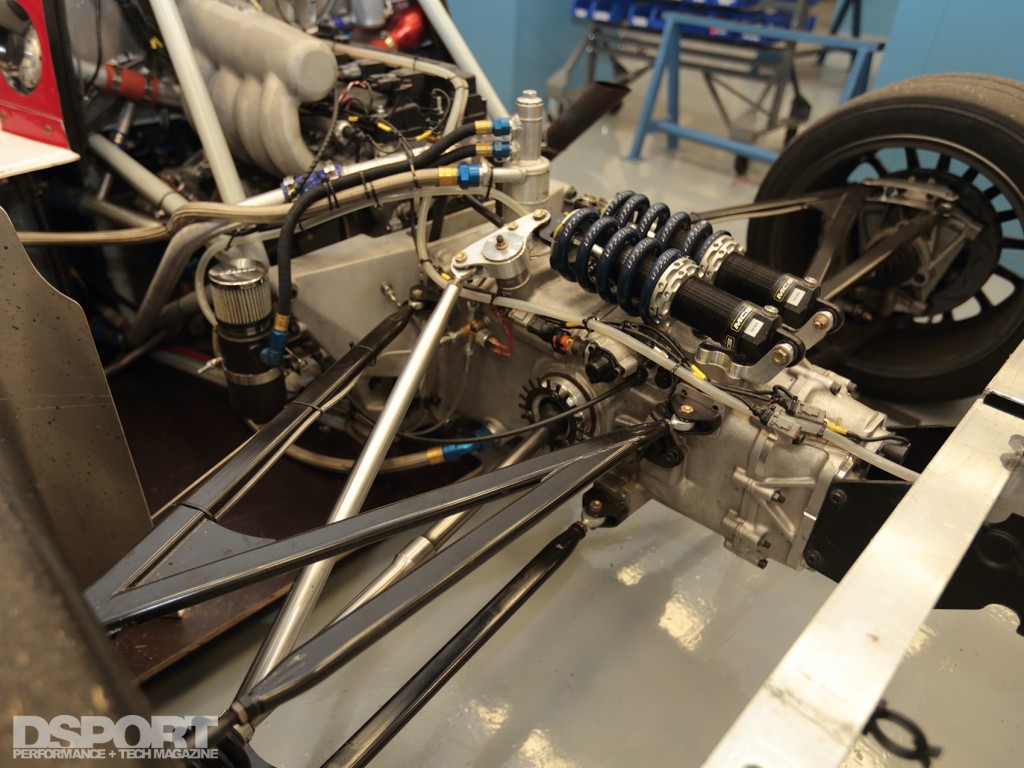 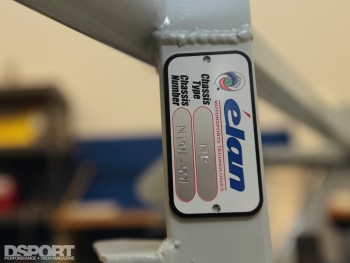 Whoever says that the best things in life are free, has never gone racing. I’ll rip of the Band-Aid and come out with it, the NP01 costs $64,995.00 for the complete unassembled kit (minus safety belts, nets, fluids and fuel), or $73,495.00 if you’d rather let the professionals at Elan build the car for you. This initial hit sounds like a lot, but the anticipated savings compared to racing other similar class cars is likely to pay off in the long run. Putting things in perspective, the NP01 beats out the likes of the latest Lexus RC-F and Porsche Cayman GTS in power-to- weight ratio at the same price. It also comes with the benefit that this car is made for hard racing; no car is fun on a racetrack if you’re going to baby it in fear of getting it a little dirty or trading paint with an opponent.

Enough of the numbers and tech talk, what is it like to drive the NP01? After piloting the car around Buttonwillow Raceway, I debated on whether or not I should keep driving the car through the paddock, out the raceway’s front gates, onto Highway 5 and take it home. It was huge fun to turn laps around the track, and I can only imagine what it’s like to race head-to-head against a field of other drivers. 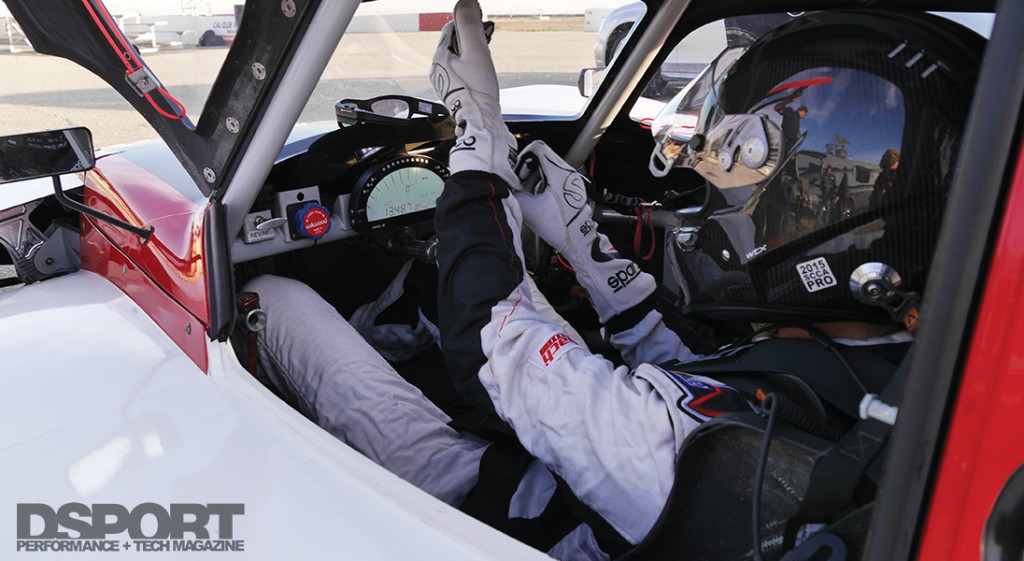 The cockpit is a tight fit for taller drivers. However, some adjustments to the pedals and a custom formed seat would provide plenty of legroom and headroom.

When I first stepped in the car, it was obvious that I was too tall for its footprint. At six-feet and one-inch in height, I’m disadvantaged as a driver, as most professional racers could easily transition into becoming horse jockeys. Although this particular car’s seat and pedals were set up for a driver much shorter than me, a few changes could make it a comfortable fit for drivers my height and a couple inches taller. I crammed myself in with my knees nearly hitting the steering wheel, yet nothing could get in the way of my excitement at this point. The Elan and NASA engineers strapped me in and shut the door and signaled me to start the engine. 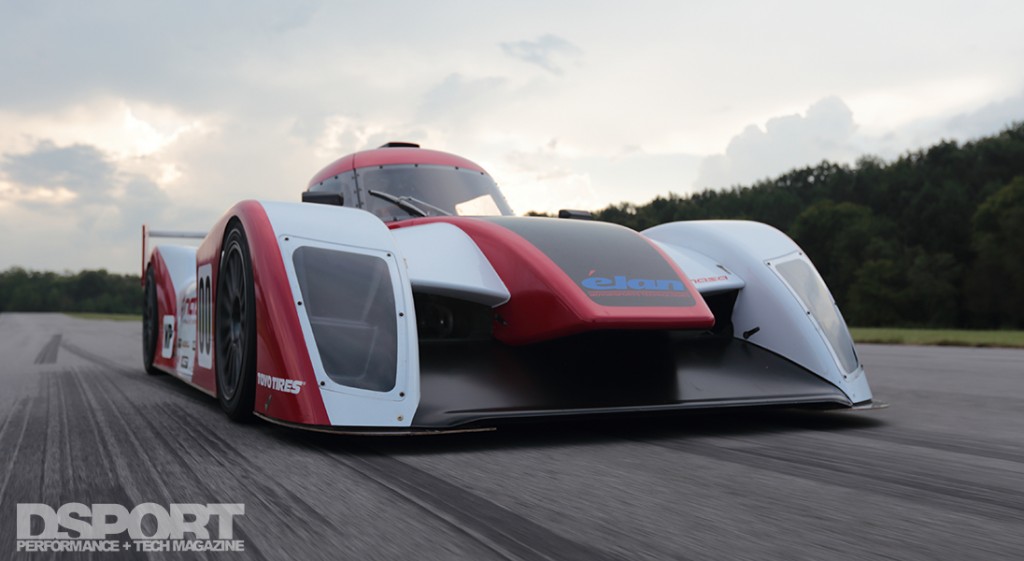 When the engine sits directly behind the cockpit, the sound is wonderful. I cruised out of the paddock and onto the track, warming up the car and getting a better understanding of its characteristics. Building up speed, the engine delivers a very smooth powerband across the entire racing RPM range. It felt far from the most powerful car to drive, but it was plenty fast to demand the driver’s attention at all times. The gearbox in the NP01 is glorious. The Sadev S75 features six gears in a sequential format with no-lift-shift , which means every time you yank the lever back for the next gear, your right foot can stay slammed on the go pedal. The gear change occurs instantly and smoothly, so there are no surprises in any kind of shock or wheelspin. Downshifting is simple, a quick blip of the throttle and forward bump on the gear lever easily sends the car into a lower gear. This was one of the smoothest and best feeling gearbox I’ve ever driven before. 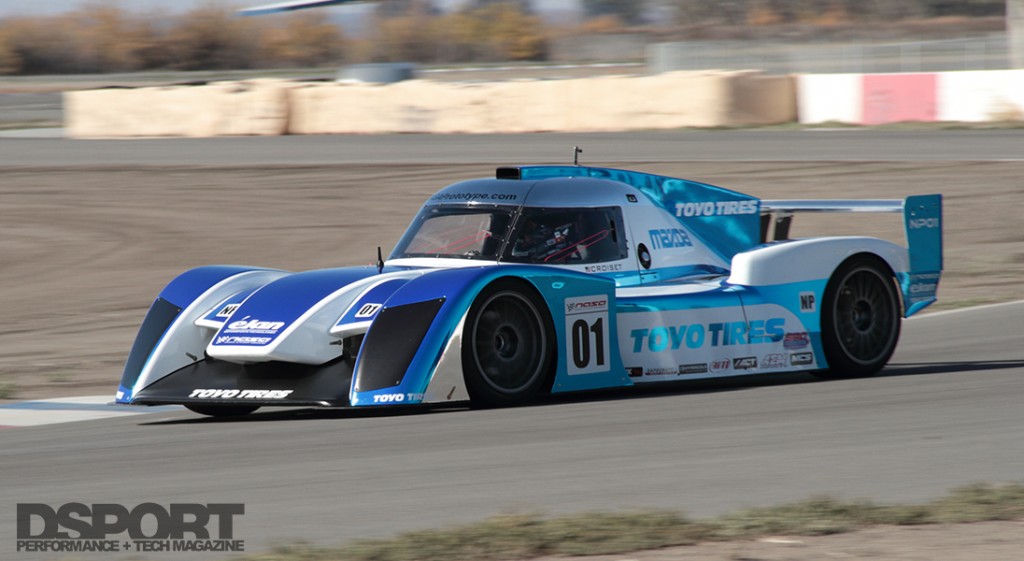 The NP01 held some very unique handling characteristics for a racecar. It turns like a formula car in high speed turns, yet it rotates like a Spec Miata in the low speed ones. For those that have driven neither, the bodywork and aero of this car spell downforce, which means it is capable of a shocking amount of grip and g-forces through fast turns when the air pushes it to the ground. At lower speeds, the NP01 loses its downforce and must rely more on the chassis and suspension components for mechanical grip. These parts contribute a lot to the handling, however the DOT-rated Proxes RR tires become the limiting factor. To this end, maximum rolling speed decreases but the car’s ability to rotate and dri the rear-end increases. While these tires aren’t the stickiest option for rubber, their characteristics can be used to the driver’s advantage if driven properly. 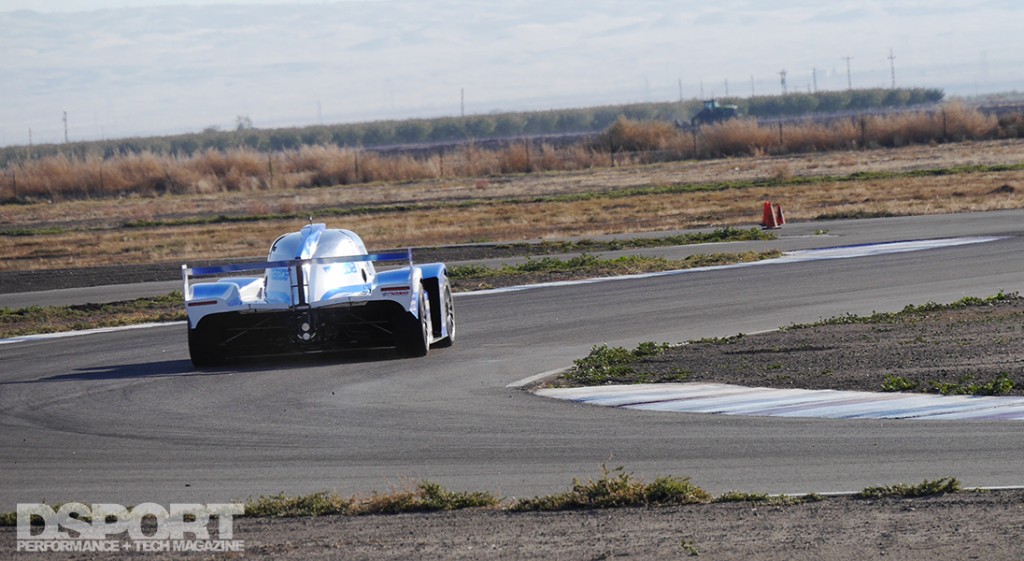 Elan Motorsports Technologies is accustomed to building top-tier racecars, a level of craftsmanship that immediately made itself apparent from the cockpit. The lack of power steering made for a heavy wheel in the corners that, although tiring for some to drive, provides a perfect feel for the road. The brakes slowed the car enough to buck drivers’ heads forward, yet allowed for plenty of modulation of the pedal to correct any mistakes and lockups. Although it’s not the fastest car you’ll see at the track, Elan and NASA held the vision from the start that the NP01 would go fast enough to deliver exciting races and fun track days, without any sacrifice to cost or maintenance. From a racer perspective, I believe that goal was achieved with the NP01. 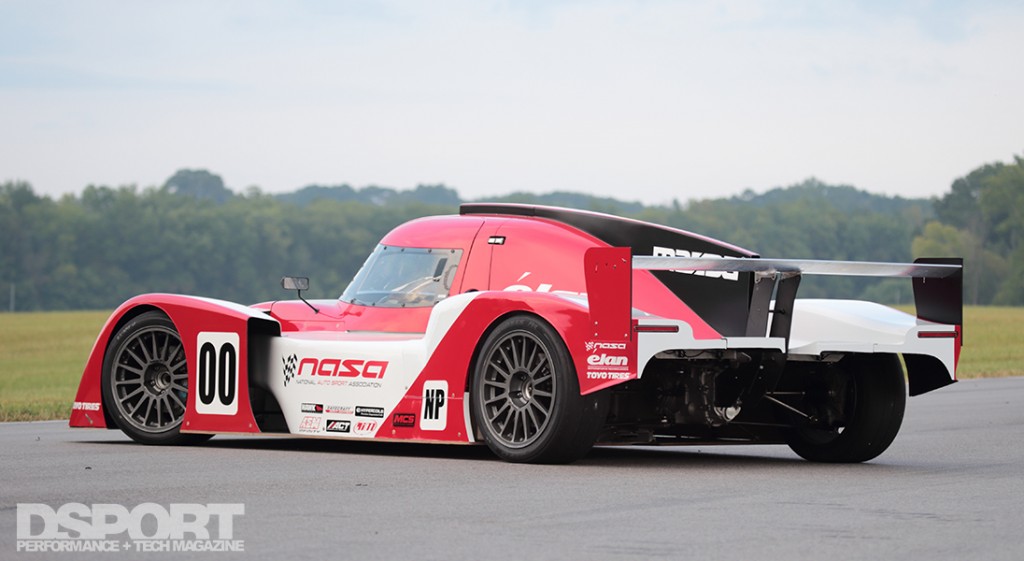 The NP01 already experienced its first test at the famous NASA 25 Hours of Thunderhill event of 2015. CLP Motorsports entered the race with drivers Jeremy Croiset, Tom Dyer, Tyler McQuarrie, Marc Miller and Pat O’Keefe taking shifts behind the wheel. The drivers raced the car for 514 laps, 1,542 miles and 8,224 gear changes, bringing the car to the finish without any catastrophic failure. This test of endurance paved the path for the car’s championship series debut for 2016. The NP01 gets its own race class in NASA events everywhere, and its own national championship race at the end of the year. Tens of cars have already sold across the country, with some extra concentration in specific regions like Arizona and Southern California. With these racecars making rounds to local tracks, we’re looking forward to witnessing the wheel-to-wheel action that the NP01 delivers.