Many of the most performance-enhancing parts of a car are also the most inconspicuous. When looking in an engine bay, high performance pistons or camshafts hide behind the veil of the engine block and valve covers, wearing no badge on the surface of the power these parts help produce. The same concept applies to any vehicle’s suspension system. While upgrades in the way of sway bars, shock absorbers, springs and control arms can improve a car’s handling, the performance of these components starts with where the suspension pieces link together. Polyurethane bushings like Energy Suspension’s Hyper-Flex product line replaces the factory rubber pieces that occupy the joints where your car’s suspension components connect, aimed to improve handling performance while also increasing longevity. To get the full story on the benefits of polyurethane, we tested the Hyper-Flex bushings on the 2016 Mazda MX-5 on the street and on the track. 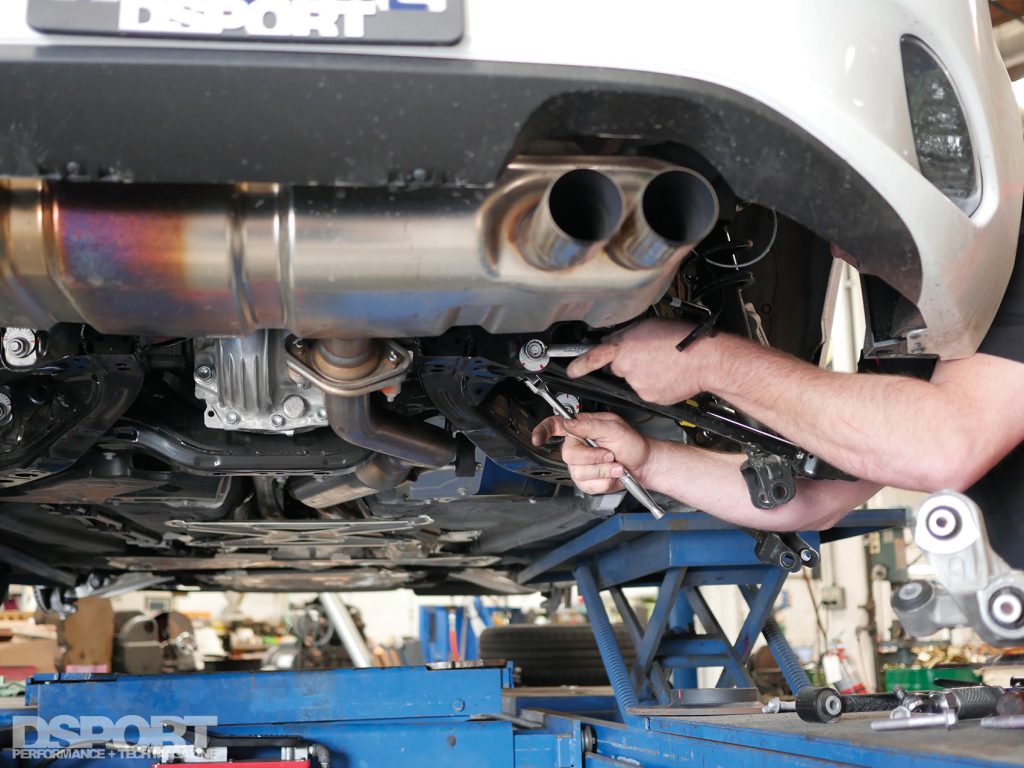 If polyurethane bushings last longer than rubber and improve handling, why do automotive manufacturers bother with rubber? First, keep in mind that te majority of all cars on the road were produced for the general consumer. This places cost and comfort high up on the priority list. The use of rubber materials reduces cost for the manufacturer and therefore the buyer. When taking the car’s comfort into consideration, rubber bushings hold the advantage over polyurethane in terms of vibration dampening and road noise reduction. Despite the benefits of rubber bushings, you’ll find little reason not to make the switch to polyurethane. In terms of longevity, the polyurethane material resists abrasions, cuts and tears much better than rubber. Beyond that, it is resistant to oil and many chemicals, leading to far less deterioration and degradation over time in comparison to rubber. All of this results in a highly increased lifespan, lasting as long as the car does for many owners. On the Shore hardness scale, rubber bushings read between 18A and 60A (similar to a pencil eraser), while Polyurethane usually resides in the 80A to 95A range (similar to a skateboard wheel). Since the bushings reside in areas of movement in the chassis and suspension system, different hardness materials will affect both comfort and vehicle handling. With polyurethane filling these areas, the joints and linking points in the suspension have less cushion to impact and torsion. This ultimately translates more details of the road surface into the chassis, providing a stiffer ride. Whether or not car owners prefer this change all comes down to personal preference. 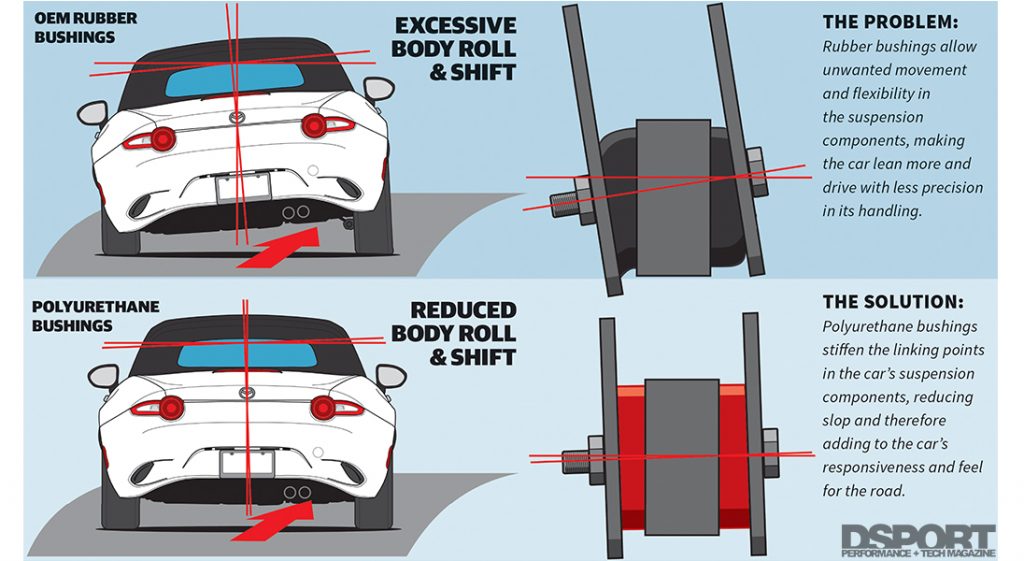 Polyurethane bushings resist wear more effectively, last longer and provide better road feel, but how do they affect a car’s handling? Energy Suspension develops its Hyper-Flex bushing kits to replace nearly every factory rubber bushing in the chassis and suspension, depending on the vehicle. The stiffer material construction of these components prevents slop and unwanted movement in these areas. This means that when you induce a change to the car by turning the wheel, accelerating or braking, your inputs have a greater and quicker effect. The characteristics of polyurethane over rubber help not only in responsiveness but also in suspension geometry while the car is in motion. Suspension arms control the wheels’ camber, caster and toe settings. When the springs and shocks compress or expand from cornering, accelerating or braking, alignment settings often change. The softness of rubber runs the risk of introducing excess or unwanted alterations to camber or toe, negatively affecting the handling of the car. Polyurethane, however, significantly reduces the amount of flexion in these areas, keeping the suspension geometries more true to their intended setup. These benefits sound great on paper, so we put Energy Suspension’s Hyper-Flex bushings to the test to measure the real-world results. 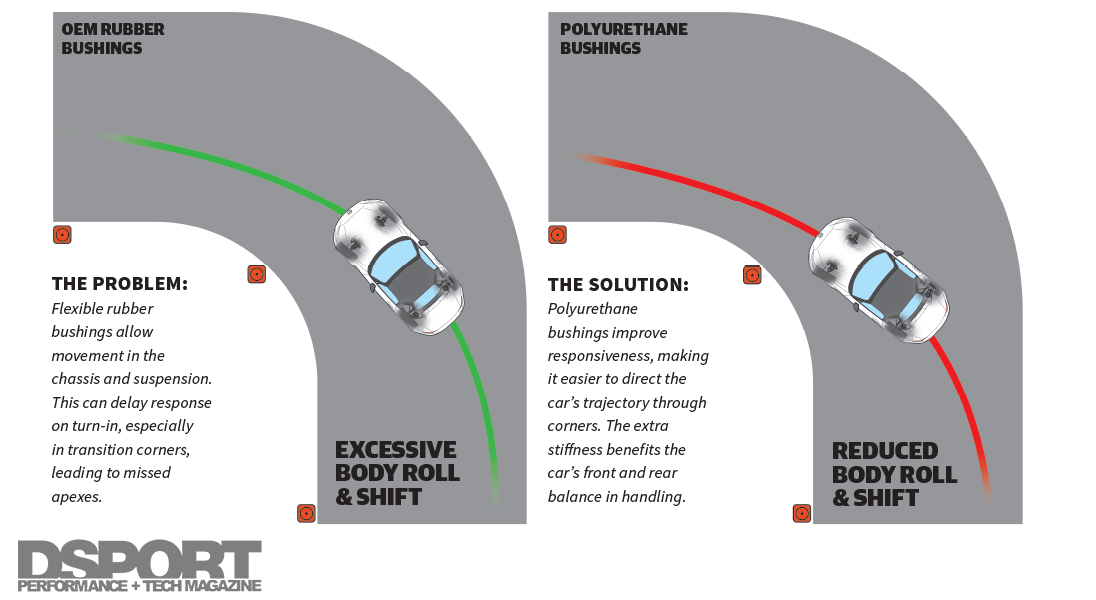 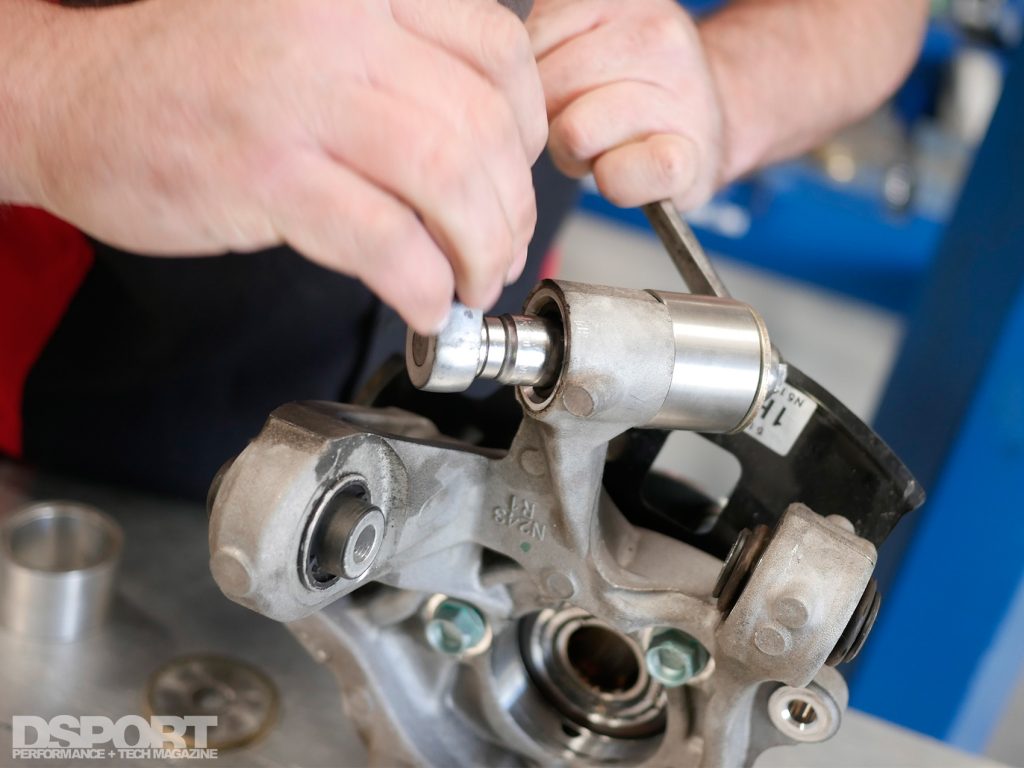 To get a feel for the effects of polyurethane bushings, we put it to the test on our 2016 Mazda MX-5. The polyurethane components replaced the factory rubber on the sway bars, suspension links, and differential and transmission mounts. We took the car to Energy Suspension’s headquarters in San Clemente, CA for the company’s assistance and expertise during the installation. There’s no way to sugar coat it – replacing bushings on a car is no small task. Many of the bushings sit in areas of high tension and heavy load, so most of the components that require removal include wheel uprights, suspension arms and shock struts, depending on the vehicle and bushings being replaced. Once these parts have been removed, most of the factory bushings need to be pressed out or even heated for removal. Access to the proper tools like a torch and a press will make the job drastically easier. Although installation is involved, a bushings upgrade is essentially an upgrade to the skeleton of your car, opening the door for the full performance potential of components you might add later. 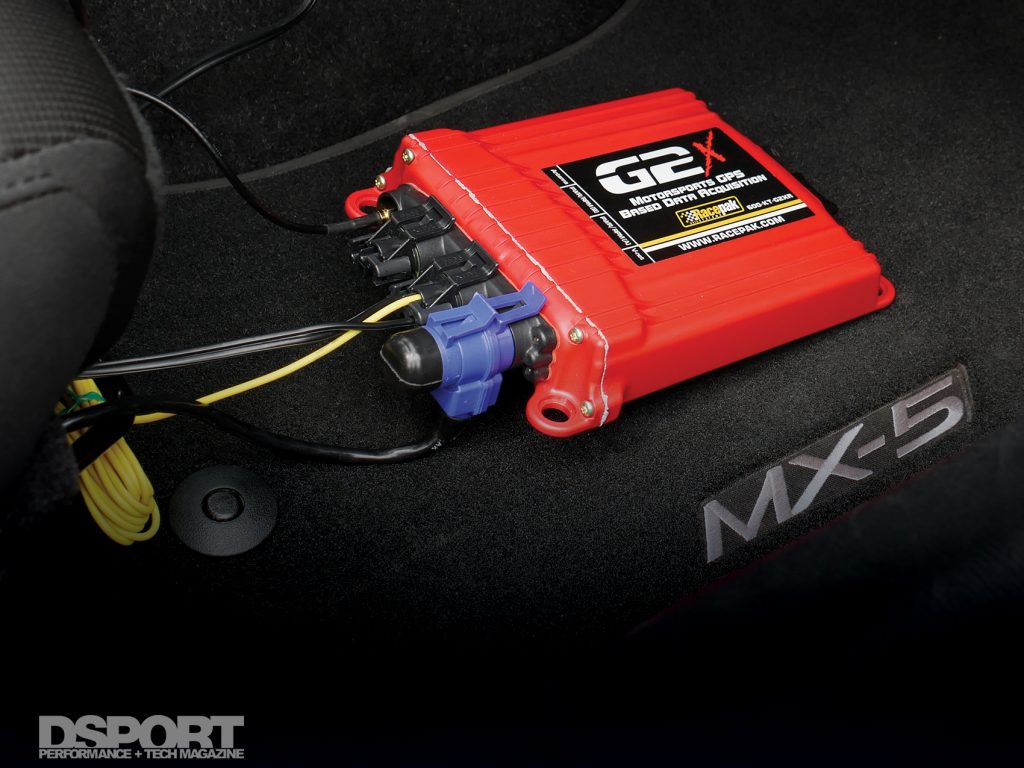 Trust in the Data We turned to our Racepak G2X data logger to again collect and analyze the car’s performance around Buttonwillow Raceway. Utilizing Racepak’s V-Net interface, we could collect data through independent wheel speed sensors, a brake pressure sensor and the car’s OBDII port. With the help of G2X’s GPS sensor and built-in longitudinal and lateral g-meters, we can track the characteristics of how exactly the car’s handling improved. 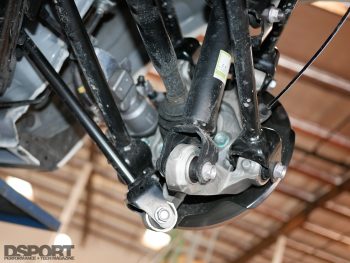 We had already tested the MX-5 in factory form around Buttonwillow Raceway for a baseline time, so with the pieces in place, we drove to the track again to quantify the difference of the Hyper-Flex bushings. A few hundred miles of city and highway drivng to the track with the new bushings revealed little difference in ride quality from the driver’s seat. The car felt stiffer and somewhat rougher on the road than before, but still nowhere near the effect of lowering springs or shock upgrades. Although subtle in difference, some car owners may prefer the more rigid ride that the polyurethane bushings deliver, given the resulting detailed feedback of the road surface. The first time we put the MX-5 on track, without any modification, the car shined in its handling capabilities but showed plenty of room for improvement. It darted through corners with a small amount of understeer on entry and a little bit of oversteer on exit. The amount of body roll and flex in the chassis revealed a delayed response when turning into corners, and especially when quickly changing directions for chicanes and esses. The MX-5 was quick, but the baseline test showed that the car had huge potential to be quicker. 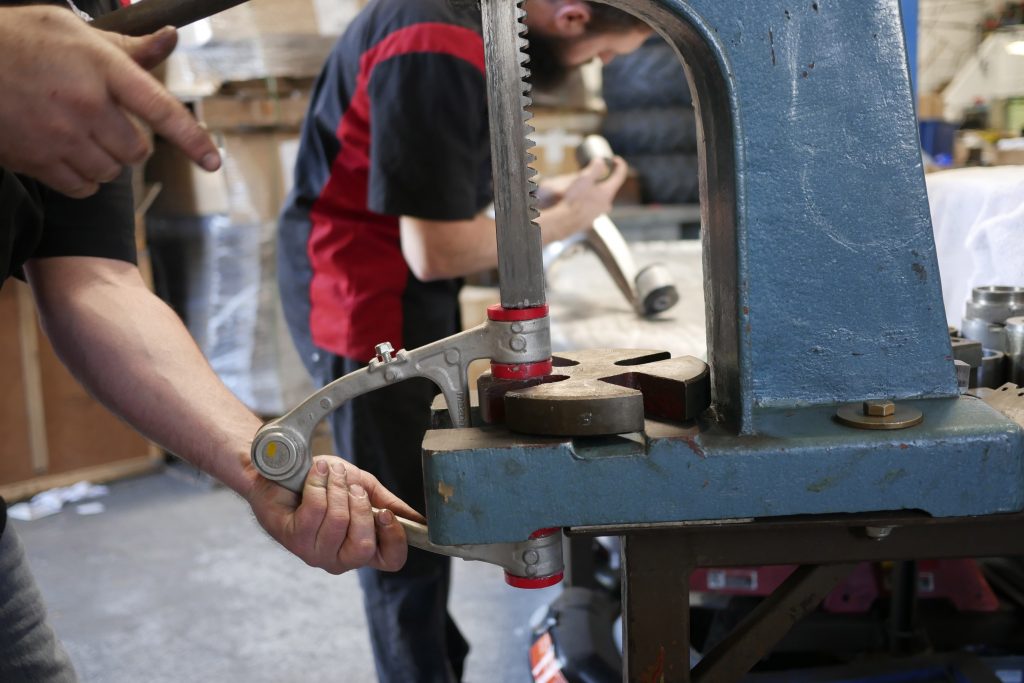 You can try to muscle in the polyurethane bushings. However, tools like an arbor press will make the process much easier.

Once we turned some laps with the Hyper-Flex bushings installed, the car really woke up. Tight corners emphasized the advantages of the stiffer setup, showing improvements in initial turn-in and car rotation. The front-end hooked up much quicker to throw the car into turns, while the reduced flex allowed the rear to drift ever so slightly. This added an extra dimension in the control of the car, but ultimately made its handling feel more in line with a racecar’s. Ultimately, we turned a 2’13.051” fastest lap around the track, approximately 1.2-seconds quicker than our 2’14.221” baseline. We saw small differences in lateral g in corner entry and mid-corner, approximately one or two tenths on average. Beyond this small positive change, vehicle rotation increased immensely. On most corner entries, the car’s yaw rate, or rotational speed, increased by five to ten degrees per second. This allowed for higher cornering speeds as the car required less effort to get pointed in the desired direction. These benefits added up to a car that felt much more cooperative and responsive than before, with the lap times to prove it. 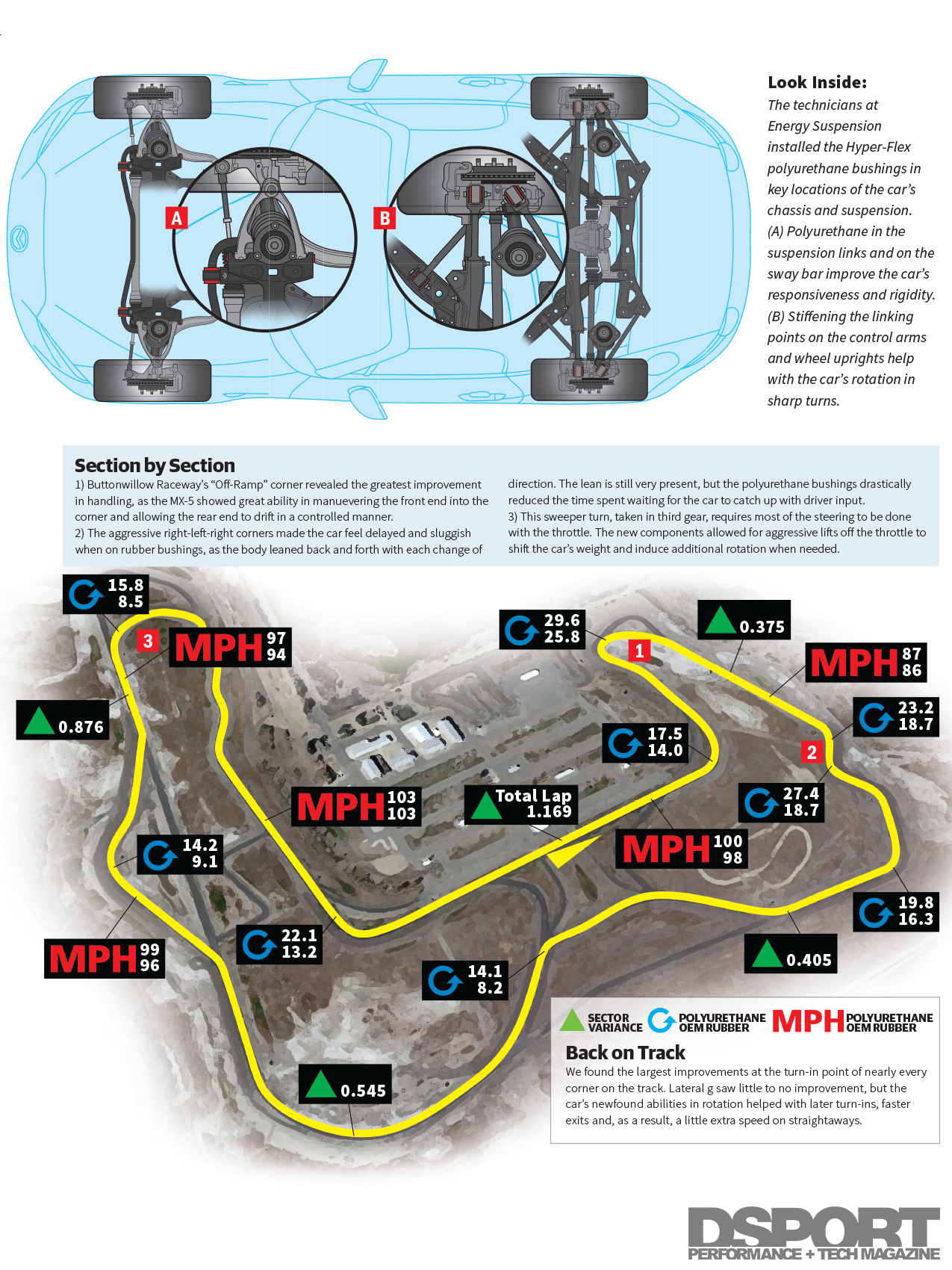 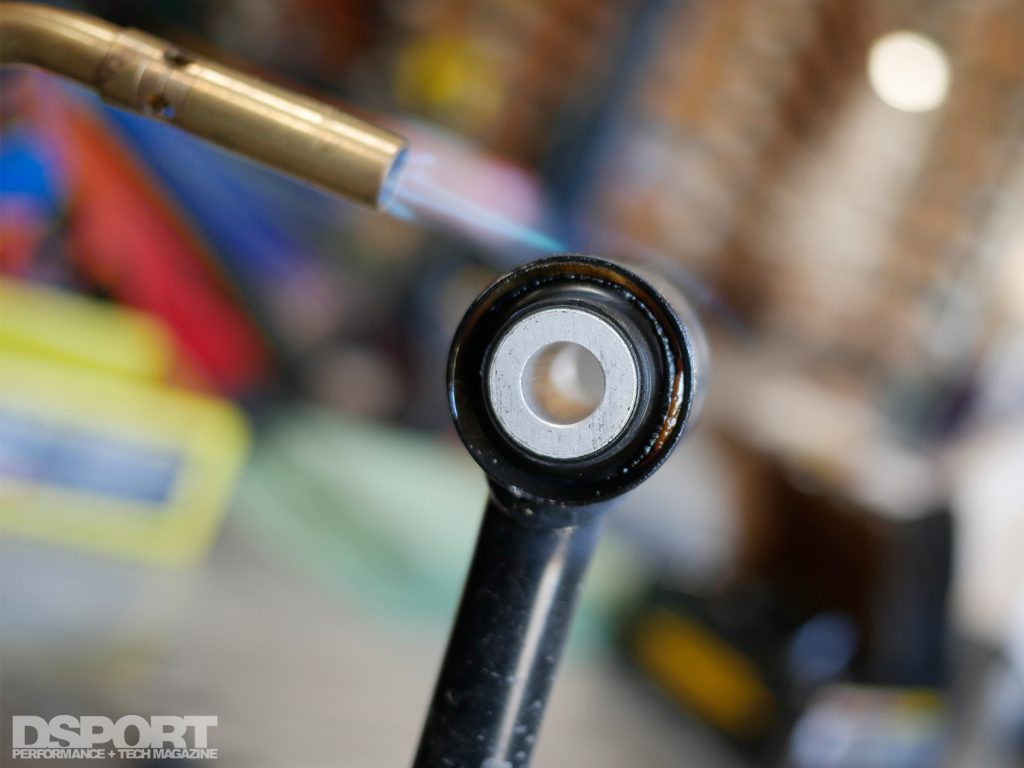 Some factory bushings cannot simply be pressed out. In these situations, a small torch to heat the outside will melt and loosen the material holding in the rubber.

In the case of this 2016 Mazda MX-5, the switch to polyurethane bushings was a no-brainer. Energy Suspension’s Hyper-Flex material delivered vehicle responsiveness and rotation, while taking little away from ride comfort (or improving it, if you prefer a better feel for the road). Replacing bushings is no easy task, one that many car owners may prefer to send to a shop to handle instead. It may be a big job to make the conversion to polyurethane, however, it’s the first step to maximizing the benefits of suspension and handling upgrades. 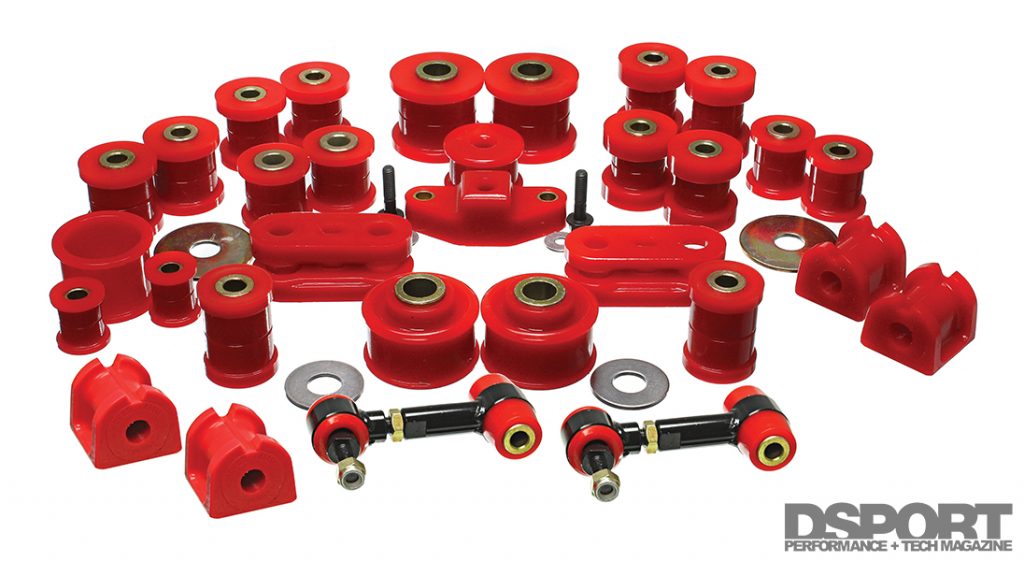