As much as many of us trash talk the onslaught of reality TV that showcases stories of rags to riches, weight loss and becoming a bonafide culinary master, the success of these shows further proves that people love transformation stories. However, the essential pieces of every “before and after” lie between the “before” and the “after.” This is where the dirty work takes place, where the finer details make all the difference in the final product. As the D’Garage Ford Fiesta ST reaches its fourth and final stage of its build, we found no shortage of details to work on in order to make it race-ready. Text by Cameron Parsons // Photos by Cameron Parsons and Aaron Eusebi // Illustrations by Paul Laguette 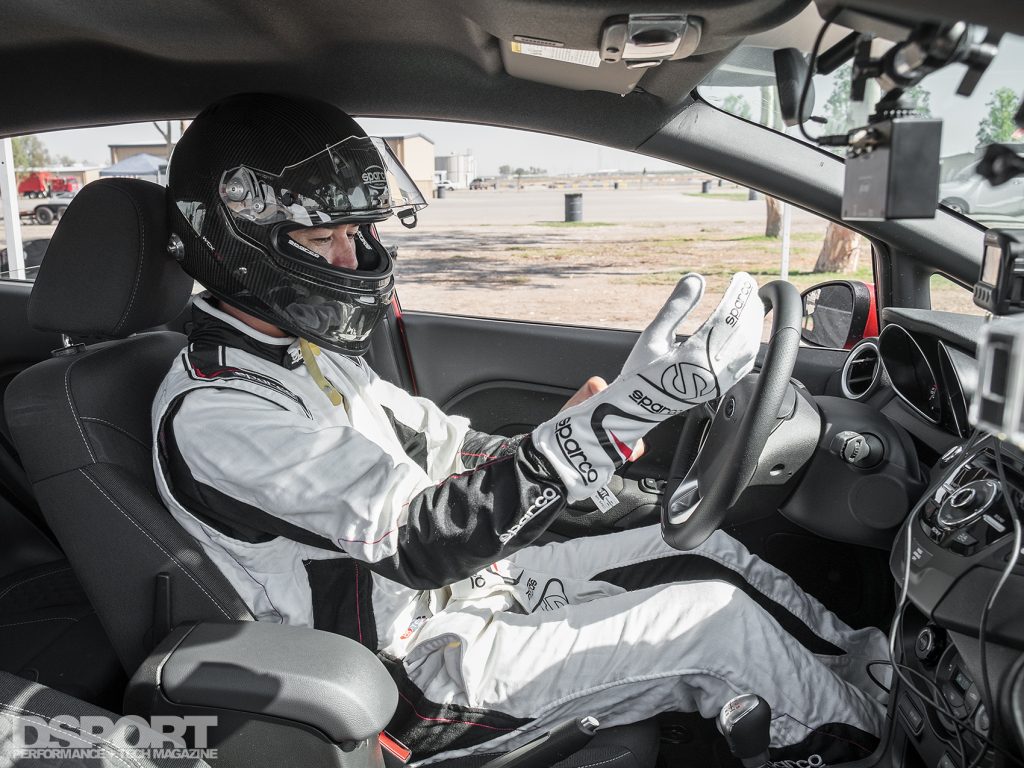 From stage two to stage three, the Fiesta ST circled Buttonwillow Raceway’s 13CW configuration much quicker, but not necessarily a whole lot faster. Given that the modifications for stage three entailed only braking and handling upgrades, it came as no surprise that we saw massive improvements around the turns but only minimal change in the higher speed areas. Lap times improved by just over three seconds, landing in the 2’08.00” range. However, top speeds only improved by 1 to 3 MPH around the track, with the exception of a 7 MPH incremental gain to reach 108 MPH on the main straightaway. In our hunt to reach the two-minute mark for lap times, we reevaluated the car’s setup to identify any room for improvement. 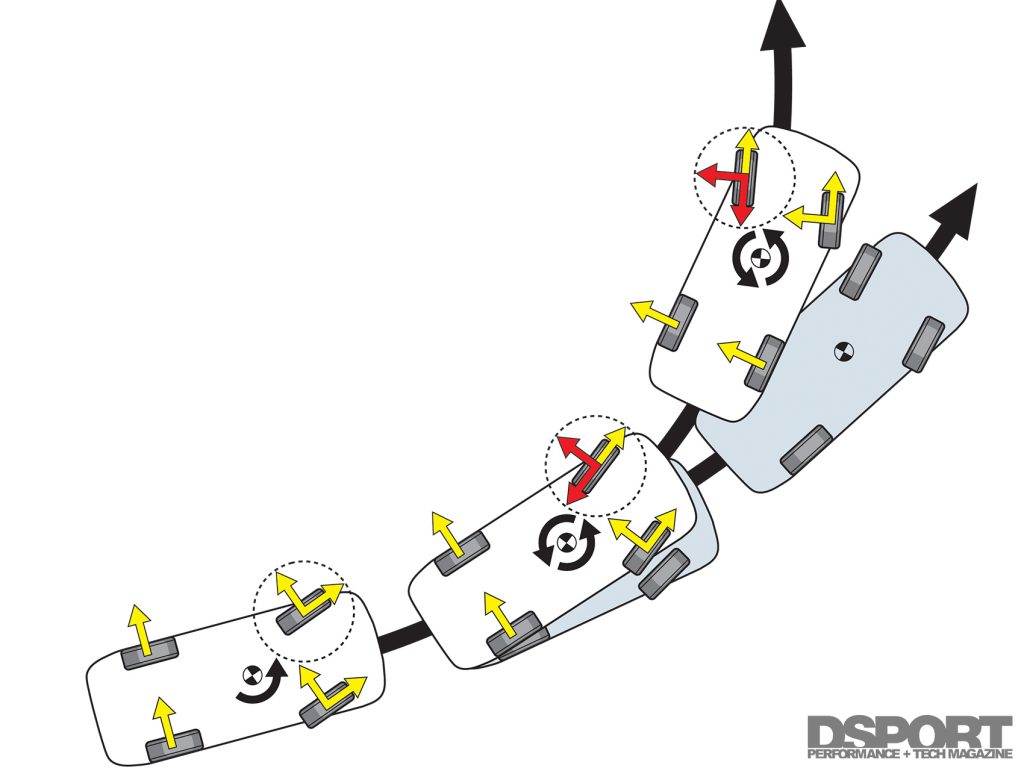 1. The driver begins turning the wheel of the car, asking it to move toward the turn and rotate simultaneously.
2. The car with better rotation responds quickly and twists in the direction of the turn.
3. The car that struggles to rotate plows through the turn, while the rotating car is back on the power for the exit.

Racing teams and drivers focus a large part of their vehicle setups around rotation. Tire characteristics, suspension settings, chassis stiffness, ballast placement and weight transfer characteristics each contribute to the car’s ability to rotate. A car that can better rotate, or twist, in the direction of a turn can carry more speed into and through that section of the track. This also helps position the car to allow the driver to get back on the throttle earlier.

Most road racers find themselves on a hunt for tenths or even hundredths of a second at a time, when modifying and tuning their vehicle setup. So where did an entire three seconds come from, and how can we pull out at least three more? First, the D’Garage Ford Fiesta ST lost 140 lbs, bringing the total weight down to 2,420 lbs. Weight loss for any car naturally improves performance by reducing its inertia, the car accelerates and decelerates quicker with less weight resisting these changes in motion. Extending beyond these benefits lies a too-often overlooked performance characteristic: vehicle rotation. A fast rotating car enables the driver to throw it into a turn with quicker response, potentially more speed and a better trajectory path for a higher speed exit.

Nearly all club and professional racing organizations worldwide require a professionally assembled roll cage, a high-strength seat and six-point harnesses. Only approved safety equipment is allowed in most of these organizations, because of the extreme levels of testing that they must withstand before being sold to any customer. The roll cage is designed to protect the driver by withstanding compression forces from the weight of a car coming down on it, as well as to hold up against loads in any direction if the car skids along its roll cage structure. Most cages must attach to minimum eight points in the cabin, often times welded to certain points of the A- and B-pillars and roof. The vehicle’s weight determines the steel cage’s diameter, from 1.5-inches up to 2-inches. 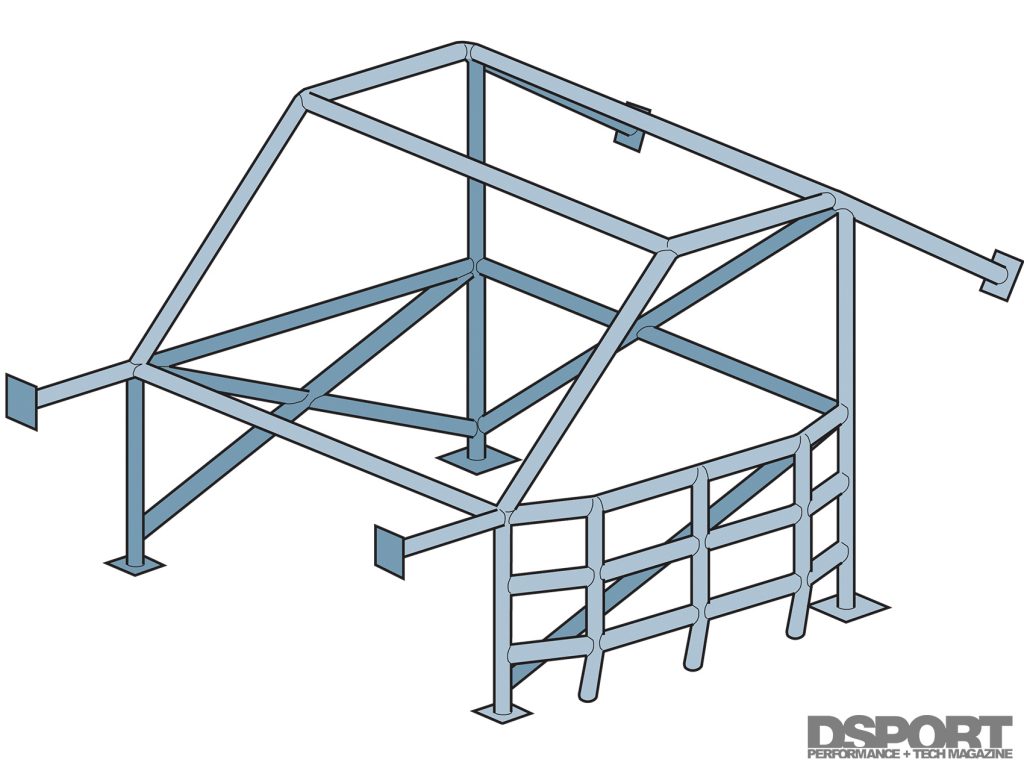 Approved seats will turn out much less cushy than those in your streetcar. Approved seats are built to withstand more than 200 lbs of rearward force, and must be covered in approved fireproof materials. It is mounted to the structure of the car on the bottom and sometimes rear of the seat, to ensure that it will not break loose in case of an accident. The sides of the seat extend up, so that your legs, waist, shoulders and head cannot move outward when the car takes an impact. Strapping yourself into a racecar feels like preparing for a rocket launch. Racecar harnesses incorporate two shoulder straps, two waist straps, and two submarine straps that come out the bottom of the seat and between your legs. With minimum two-inch straps tightened down on you in all directions, you’ll find yourself unable to move your body in the slightest. While this setup may not be as comfortable or loose fit as your streetcar, it’s the reason why many racing drivers can walk away from a 100 MPH crash. 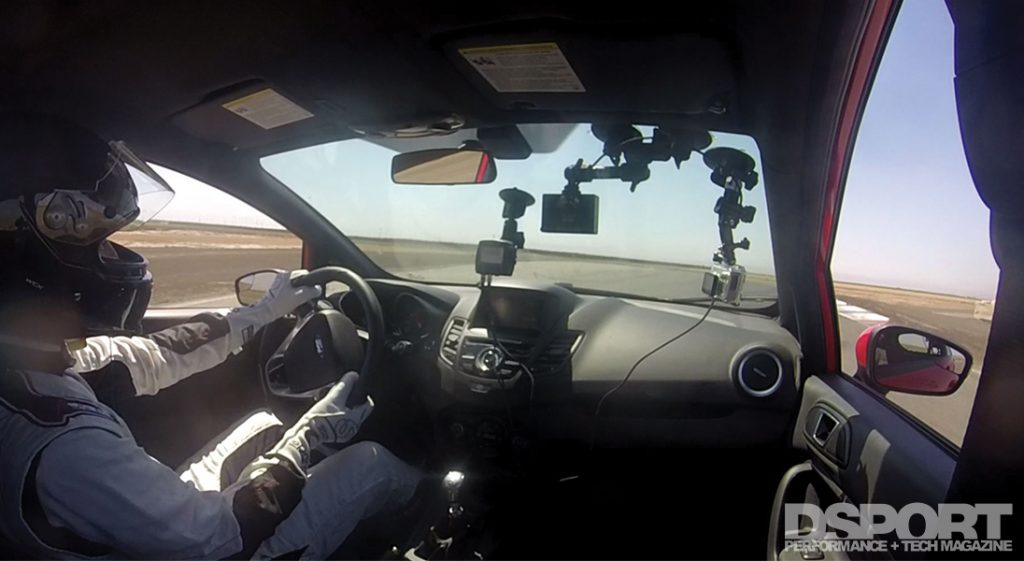 While the Fiesta ST received an overall diet, the physical locations on the car where weight is lost can greatly affect performance. Formula One and other purpose-built racecars, for example, center the overall weight as much as possible. The driver and fuel cell sit in the middle of the car, with the engine directly behind them and in front of the rear wheels. This sort of setup quickens the vehicle’s response and rotation due to a reduction in angular momentum, similar to when figure skaters pulls in their arms and legs to spin faster. Although production cars like the Fiesta ST don’t provide such flexibility in relocating mass, the car appears to have been designed with weight distribution in mind. The front and rear wheels sit far out at each of the car’s four corners, leaving very little bodywork, and thus little mass, hanging beyond them. The front engine, front-wheel-drive configuration naturally places a majority of the weight on the nose of the car. However, Ford crammed the EcoBoost 1.6-liter turbo engine far back in the engine bay, keeping as much weight as possible from hanging past the front wheels. As the majority of our weight reduction took place in the interior, we will likely find the car still biased towards the front end. Given the Fiesta ST’s drivetrain configuration, this may not be so bad, as many racers commonly say that front-wheel drive cars like to be driven on their nose. 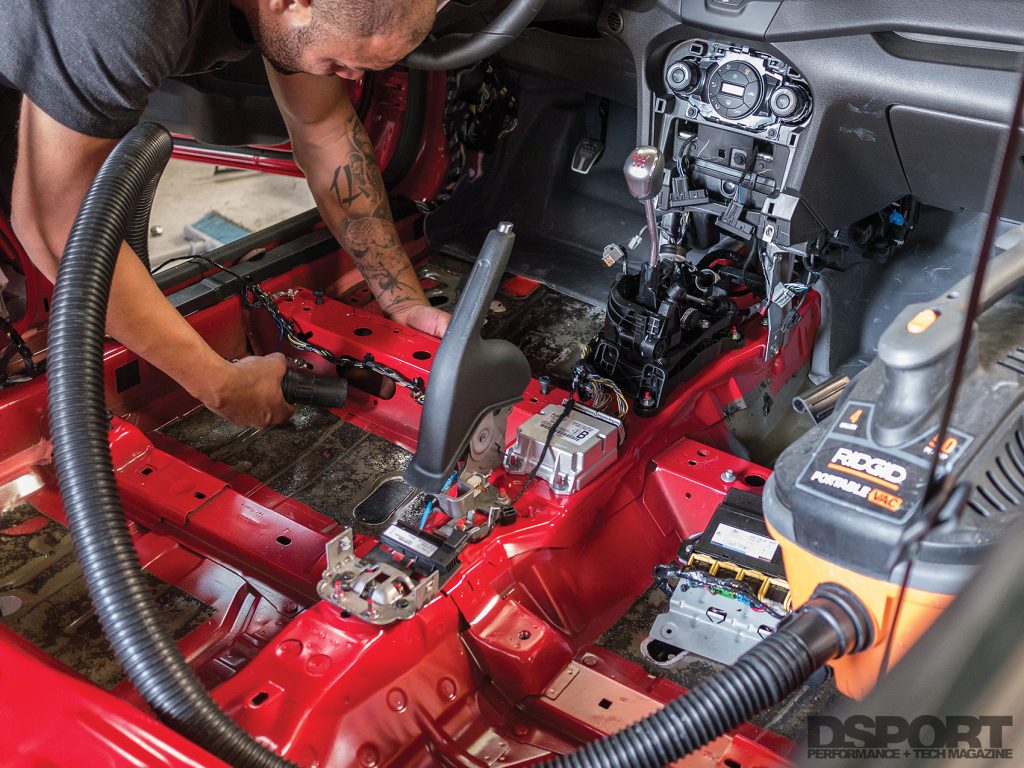 Another major element to consider in weight distribution is unsprung weight. The wheels and tires, brake components, and suspension exist between the car’s chassis and the road surface, tying the two together. To this end, each of these unsprung weight items strongly influence the tires’ contact patch as well as the vehicle’s weight distribution and response to the road. As the car travels over a bump, these items resist movement, depending on their weight and the severity of the bump, before transferring energy to the chassis. Lightening these items reduces their inertia and increases their responsiveness to the road surface and changes in the car’s handling dynamics. Adding to benefits in performance, a lighter component causes less strain on itself and can thus improve its reliability. 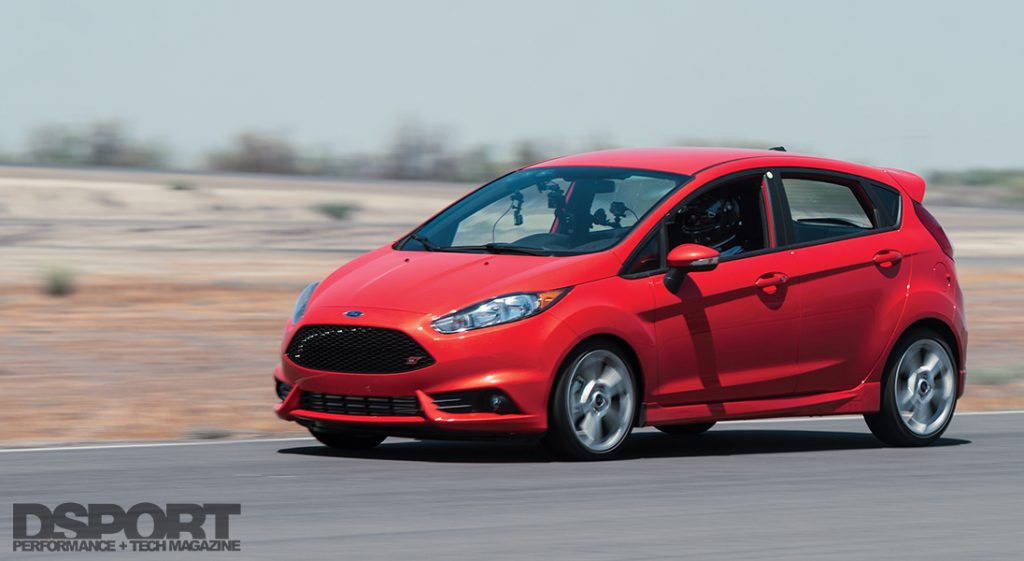 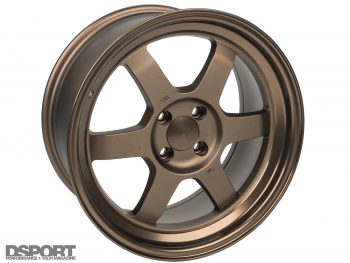 Utilizing Wilwood’s six-piston calipers and lightweight rotors in stage three, we cut the weight of the front braking components in half. For the fourth stage, a set of Volk TE37V forged one-piece wheels bring the unsprung weight down further. Pressing on the scales at a little over 17 pounds each, these wheels reduce each corner’s weight by approximately five pounds from the factory equipment. While aiding in reducing the car’s weight on the scales, the lighter-weight wheels also reduce rotational mass, providing less resistance to allow for better braking and improved acceleration. 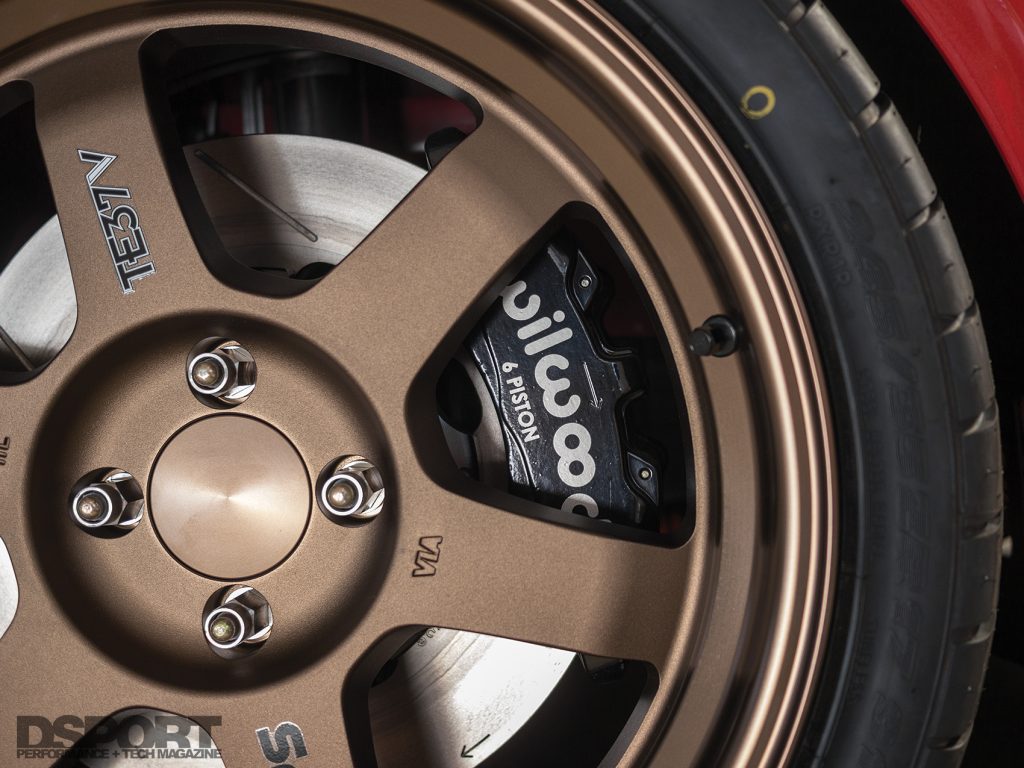 Beyond the 140 lbs diet, the Fiesta ST found handling benefits in its newly equipped Nitto NT01 tires and KW Variant 3 Coilover Kit. As expected, the AA traction tires grabbed onto the pavement to increase grip dramatically. Paired with the coilover suspension tuned to affect weight transfer just how we wanted, the car navigated through corners with an average of 0.2 to 0.3 lateral g advantage over the second stage test. We found peak lateral forces reaching nearly 1.5g, and averaging 1.1 to 1.2g around most turns. The Quaife/mountune ATB Helical Limited Slip Differential completed the stage three build, greatly assisting the car’s composure as it entered and exited turns. 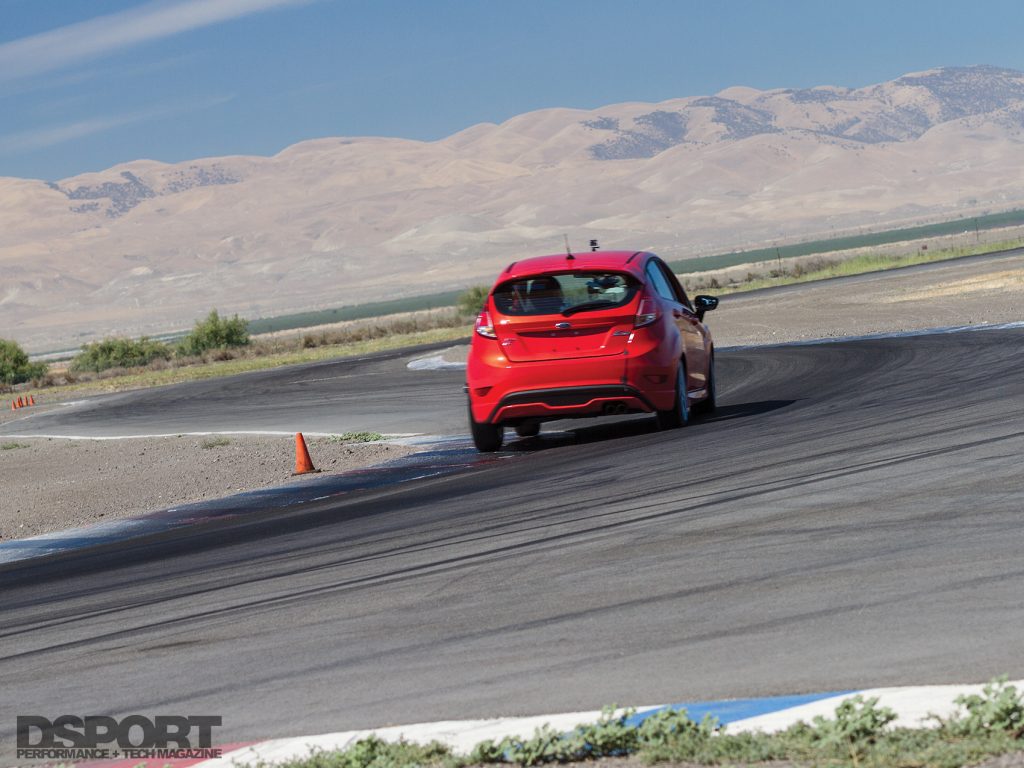 As much as we’d like to break the two-minute mark around Buttonwillow Raceway, plunging the Fiesta ST into an eight second lap time improvement is asking a lot. To that end, we’ve squeezed a lot of performance out of this streetcar already, but the next step calls for a full racecar build in order to get the most out of the chassis and 1.6-liter EcoBoost engine. The car has nearly reached its limit of weight reduction with its fully stripped interior, however, there were a few more items to address in the cabin. The Fiesta ST transformation into a racecar takes more than simply power-adding parts. Owners of any car built for the track should strongly consider utilizing proper safety equipment. Although vehicle safety has come a long way for streetcars, manufacturers design these safety features primarily for street use and not for the racetrack. 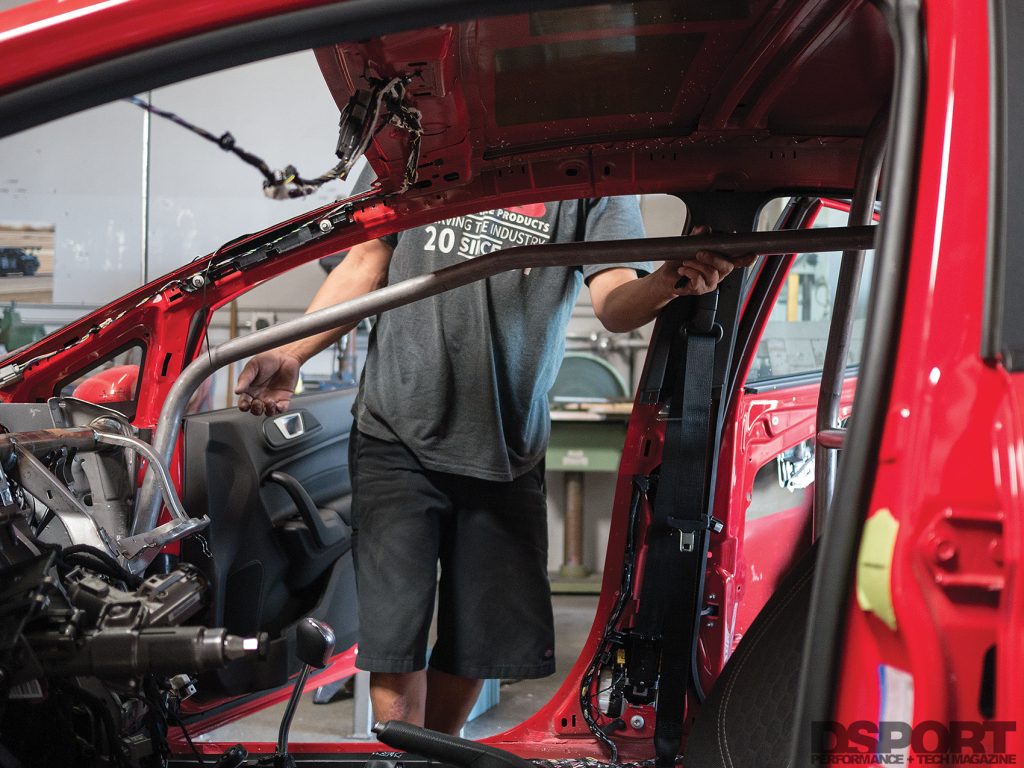 The D’Garage Ford Fiesta ST is expected to participate in select racing events in the future, so we opted to equip the cabin with some of the most widely rules-compliant safety gear possible. A complete, custom fitted and welded roll cage filled the interior, meeting the standards to compete in Pirelli World Challenge, among other events. Adding to safety and lightness, Sparco Pro-ADV seats, six-point HANS harness, R 345 removable steering wheel, racing shift knob and carbon-fiber pedals surround the driver. Each of the safety items meet SFI/FIA certifications, offering the driver the best, certified protection from on-track incidents. Focusing more on driver and vehicle performance, an AiM MXS dash mounts behind the steering wheel to log and display detailed information in full color. Essential information such as engine speed (RPMs), oil pressure, temperatures, voltages and lap times pop out of the screen so that the driver can stay focused on the road while monitoring the car’s status. Off the track, tuners and drivers alike can view the data from entire lapping sessions to hunt down the best setups and most effective driving techniques. With the Fiesta ST’s cabin nearly complete and race-ready, many of stage four’s biggest changes will happen under the hood. 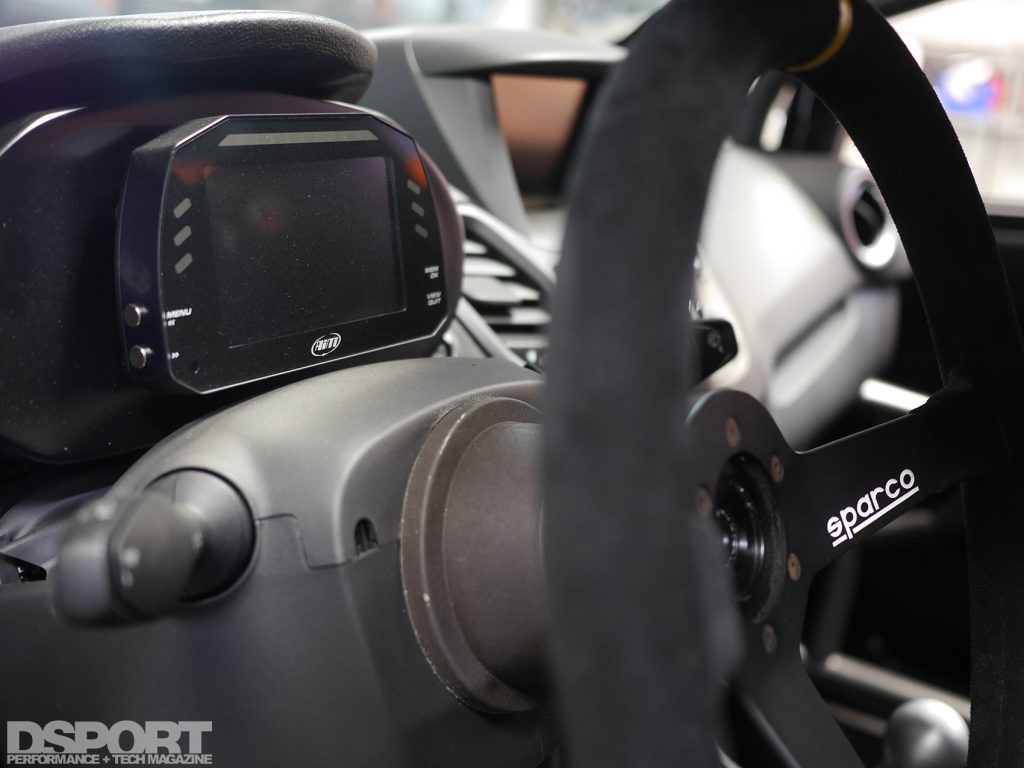 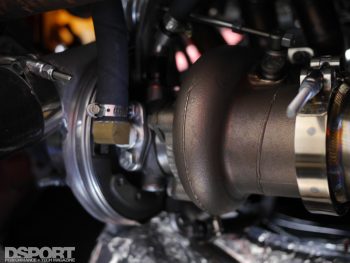 Although the Fiesta ST’s torque output experienced an enormous jump over the factory numbers, the car needed help with top end power. In order to cure this power struggle, we turned to Full-Race Motorsports in Phoenix, Arizona. The forced-induction experts there took delivery of the car, worked their magic and returned it with a custom-fitted turbo kit and exhaust. The setup incorporates a Borg Warner EFR 6258 turbocharger with a .64 A/R T25 housing, a precision-fabricated manifold of thick wall stainless steel, and a three-inch downpipe and exhaust. However, the fun doesn’t stop there, as we’re aiming for well past 300whp to reach our lap time goal. The compact 1.6-liter EcoBoost engine went through a complete teardown in the DSPORT machine shop for a full analysis as we begin to sketch out plans for the rebuild. We’ve already anticipated the need for additional fuel delivery to supplement the existing direct injection system, requiring modifications to the head. Digging deeper into the internals, we’ll place a large emphasis on extra strength, better balance and tighter tolerances in order to efficiently withstand the power-making modifications. Stay tuned, as we rebuild and take to the track again in our hunt for the 2’00.000” mark at Buttonwillow Raceway. 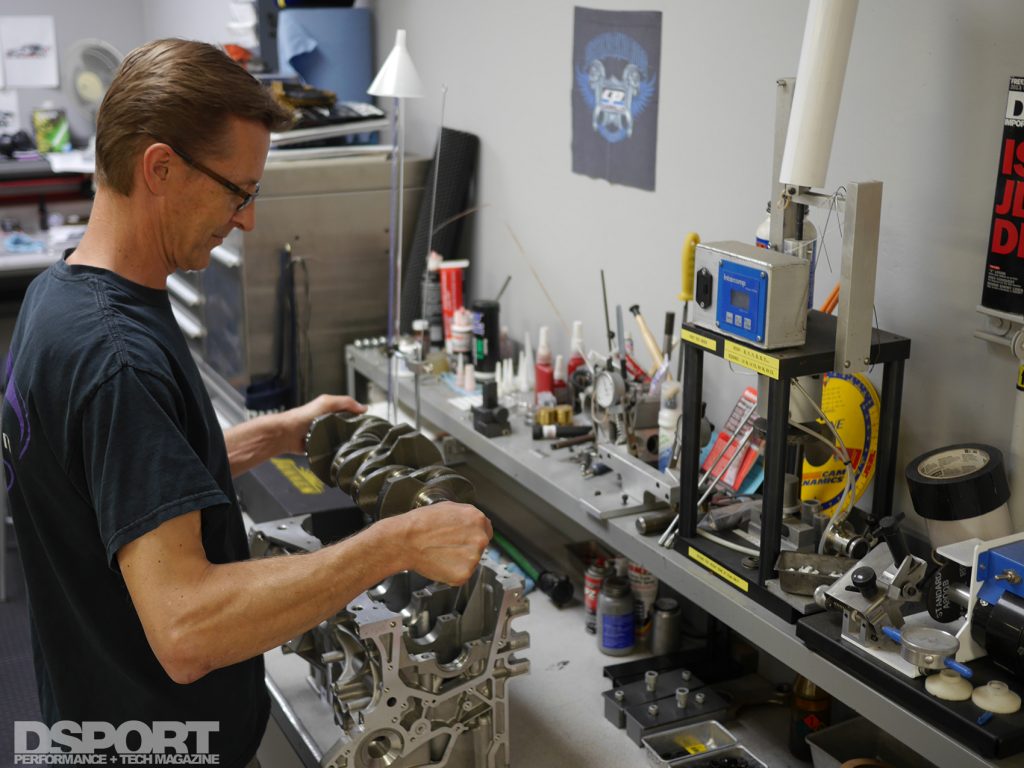