No drag strips, no tuner and companies around the world feeling the impact from COVID19 has caused more than a few projects to fall behind. While this Project Forte has been impacted significantly, we were still able to make a giant leap in the right direction since our last episode. The team at Precision Turbo upgraded our OEM turbo to be able to meet our performance goals. Let’s take a look at the turbo upgrade and how this will help us realize our ultimate goal of making this Forte GT into a Type-R killer. 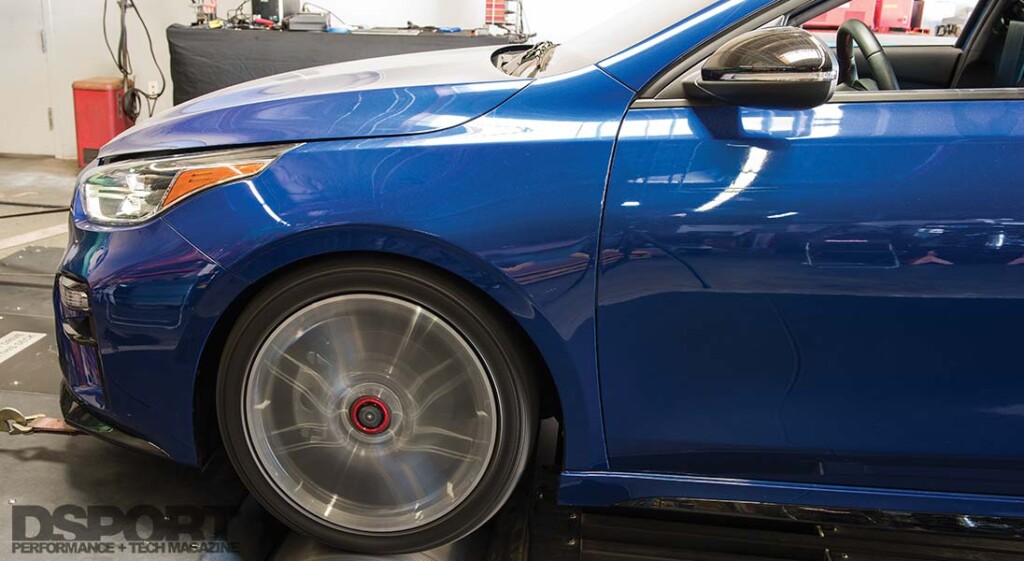 With enough money, just about any car can be upgraded to outperform another car. However, if you need to spend $15,000 to make a $24,000 car quicker than a $37,000 car, did you accomplish anything noteworthy? When Peter Pak of Harman Kardon asked if it would be possible to upgrade a Forte GT to be able to beat a Civic Type R in a drag race with a budget of about $3,500 in upgrades, I said it would be very challenging and thought a budget more on the order of $5,000 would be necessary. Of course, we could have used a nitrous-oxide system or switched over to E85 to get some massive performance gains with minimal investment, but that would not be an apples-to-apples comparison. We wanted an upgrade package that does not involve one of the vehicles using an additional power adder or different fuel to beat the other car. This is to be a straight-up knife fight with no guns allowed. For this project, we needed the right knife. 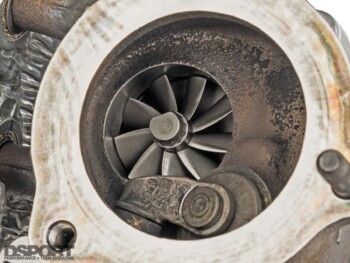 The physical characteristics and design of the turbocharger establish the personality of the engine. The OEM turbocharger on the Forte GT is manufactured by Borg Warner. It is one of the latest-generation K03 offerings and it features an electronically controlled wastegate. The inducer on the compressor is just 37.6mm while the wheel’s major diameter is 49.2mm. This makes it a 58-trim wheel. At OEM boost levels, the turbo moves enough air to help the engine generate 185whp (218bhp). With the DTE Systems Power Control unit in place, boost pressures increased to allow the OEM turbo to produce 208whp (245bhp). 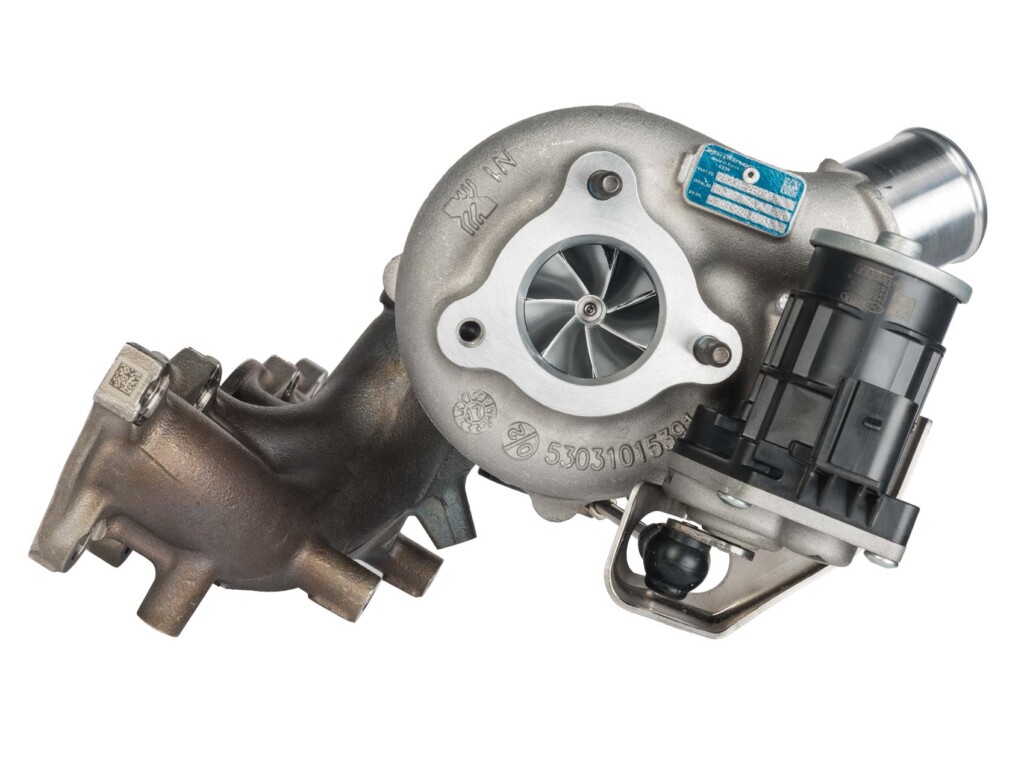 For our turbo upgrade we wanted it to be a complete bolt-in that would not require any special adapters or hardware to fit. Externally we wanted it to appear completely stock. From a performance standpoint, we did not desire modifications that would result in a reduction in service life for our upgrade turbo. Since the BorgWarner K03 turbocharger series has a 7mm shaft and bearing assembly that reduces to 4.6mm for the compressor wheel, it is not as robust as some of the larger-shaft/bigger-frame turbochargers. Using a compressor wheel that has a much larger outside diameter can increase the stress and strains of the bearing assembly and the shaft reducing the service life considerably. We didn’t want an upgraded turbo that sacrificed reliability or traded away a ton of response to make a great peak power figure on the dyno. We needed an upgrade that would be able to reach our 260whp target without giving up a noticeable amount of response. Essentially, we wanted it all: The ability to make 25 percent more power, no noticeable decrease in boost response and no reduction in service life. As long as we are asking for it all, we would also want the turbo to be able to be CARB certified in the future. 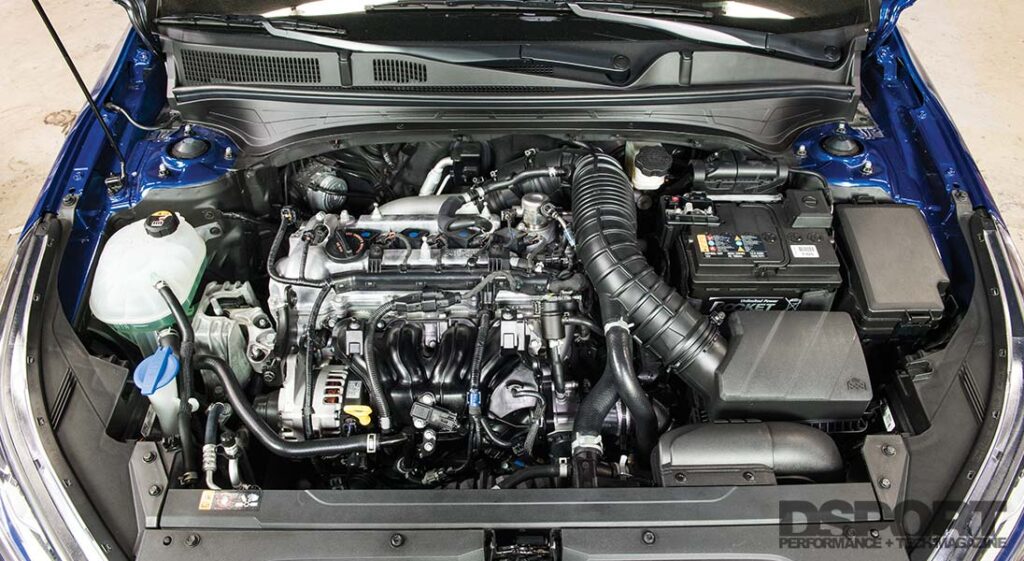 Supplied with our wish list and the OEM turbocharger, Precision Turbo’s custom shop tore down the factory turbocharger to see what could be done. First, Precision Turbo sourced a higher-flow turbine wheel. This turbine wheel featured an exducer area that was 20-percent larger than the OEM turbine. The increased exducer area will help to decrease backpressure when the compressor flow is increased. Running a larger turbine wheel also helps to decrease start-up vehicle emissions by allowing the catalytic converter to reach operating temps sooner. To get the desired compressor flow improvement of at least 25-percent, Precision Turbo selected a CNC billet compressor wheel that was about 15-percent larger in the major diameter but delivered a 27-percent increase in inducer area. This should provide a true Goldilocks solution, not too big, not too small, just right. In order to get the larger turbine wheel and compressor wheel to fit in the factory turbofold and compressor housing, special jigs and tooling were built to allow the necessary machining to squeeze the 42 waist into the 38 jeans. After proper clearances were verified, the rotating assembly was then dynamic balanced to keep it happy even when it approaches the 200K RPM mark. 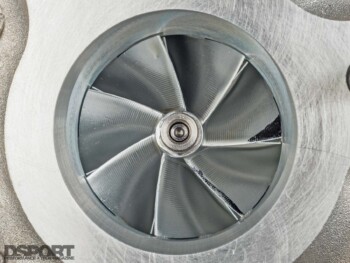 After the completed installation of the new upgraded Precision turbo, our normal course of action would be to have our tuner on hand to optimize the fuel, ignition and wastegate/boost calibration for the new turbo. Unfortunately, the tuner we planned to use is stuck in Australia due to the pandemic. As we try to see when the travel ban may be lifted, we are starting to consider something that I always try to avoid… e-tuning. While I’m not a fan of remote e-tuning where the tuner is not able to use his senses of sight, sound and feel while on the dyno, our new normal may not leave another option. 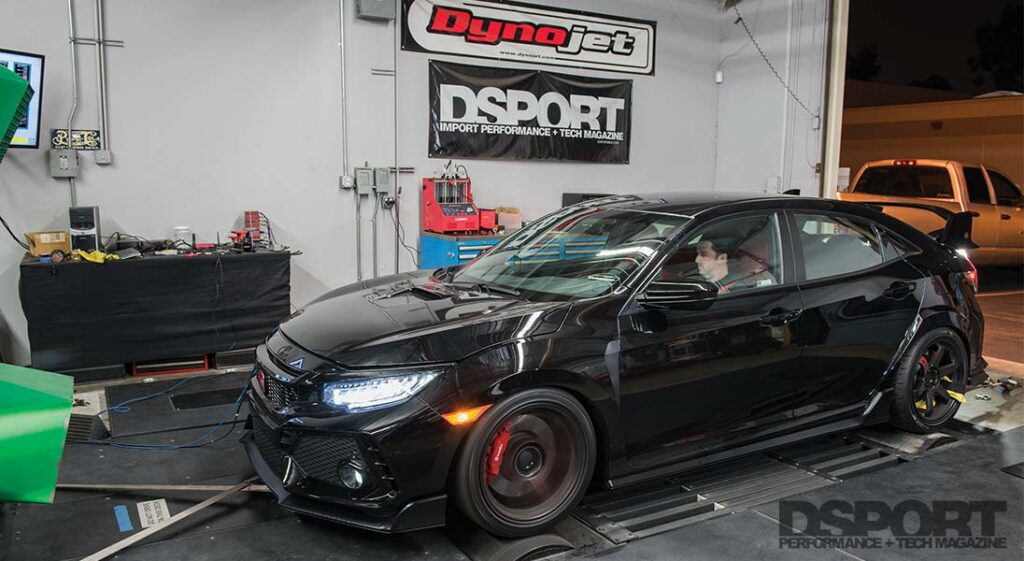 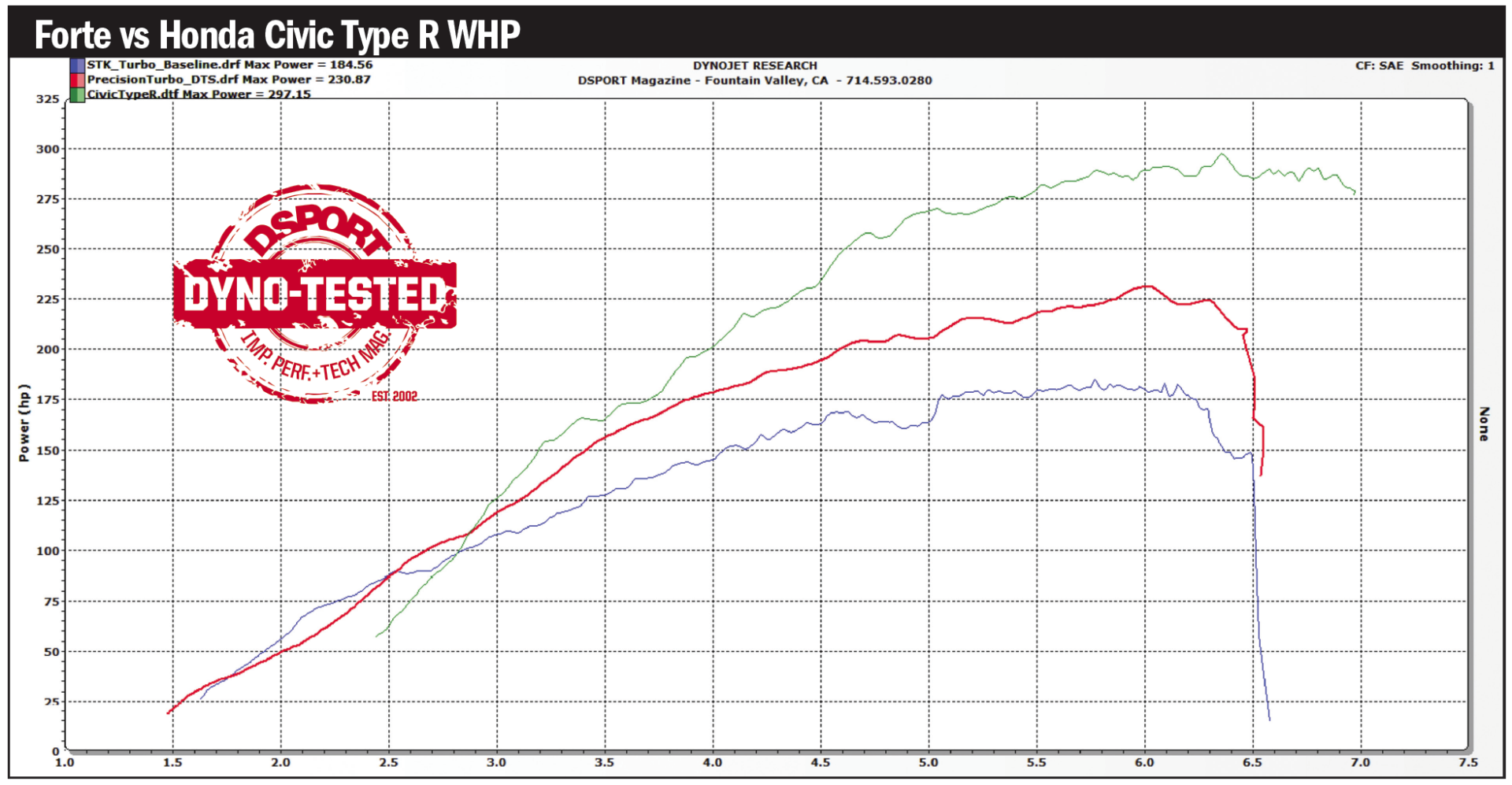 The Honda Civic Type R is the target for our Project Forte. In stock form, the Civic Type-R had a 112.6 horsepower advantage over the Forte GT. Now with the Precision Turbo upgrade in place, the gap has been cut to about 65 horsepower. Since we haven’t recalibrated the ECU to take full advantage of the new turbo, we expect to see some major gains with the tuning. Since the Forte GT has a significant weight advantage over the Type R, we won’t need to match the power to beat it in a straight-line showdown. 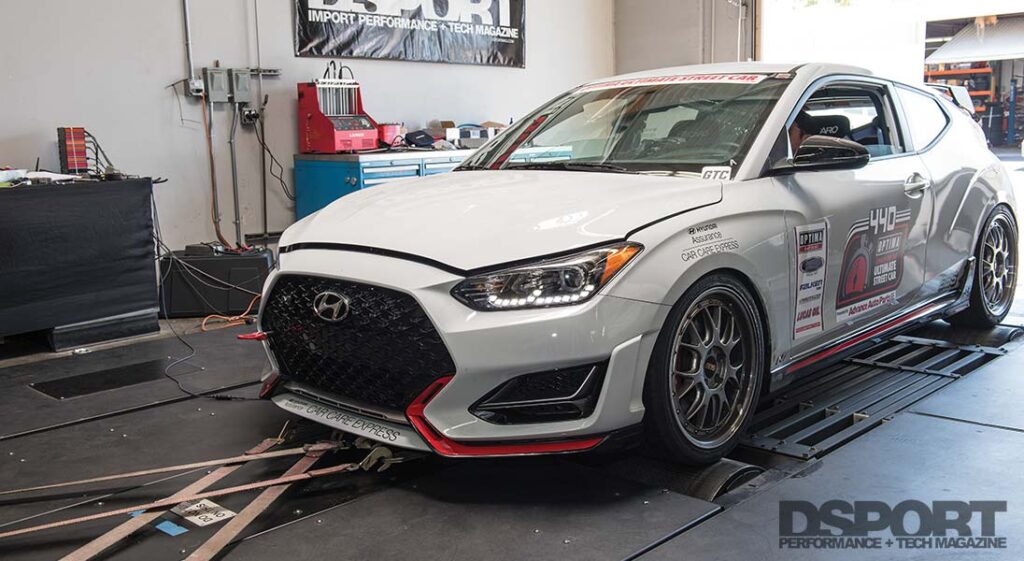 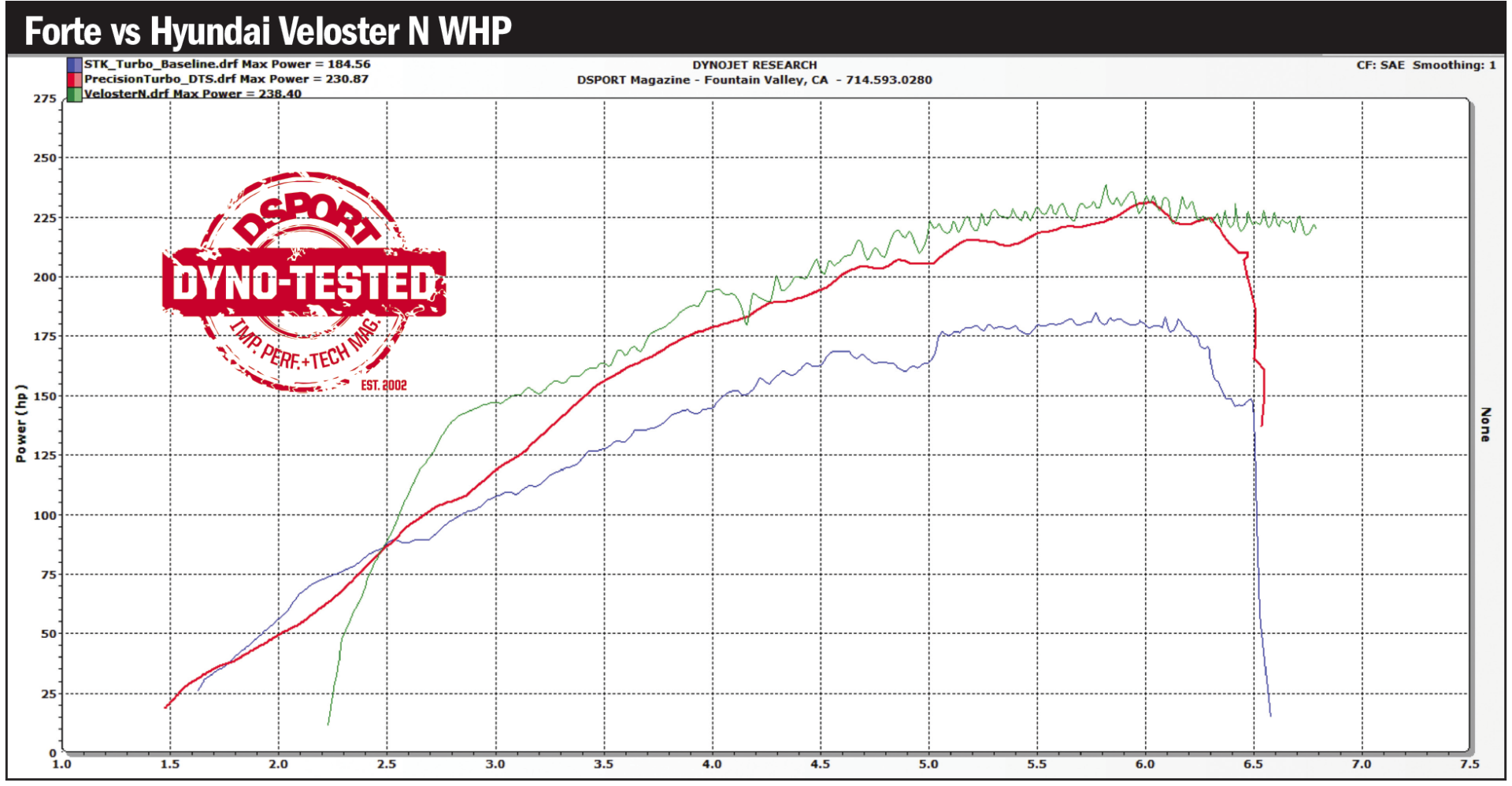 The current standout from the Korean compact car market is the Hyundai Veloster N. Despite using the smaller 1.6-liter instead of the 2.0-liter found in the Veloster N, the Forte GT with upgraded turbo  is less than 10 horsepower shy of matching the performance of the 25-percent bigger engine. After the next tuning session, this Forte GT will have a serious advantage over the Veloster N in any stoplight to stoplight confrontation. 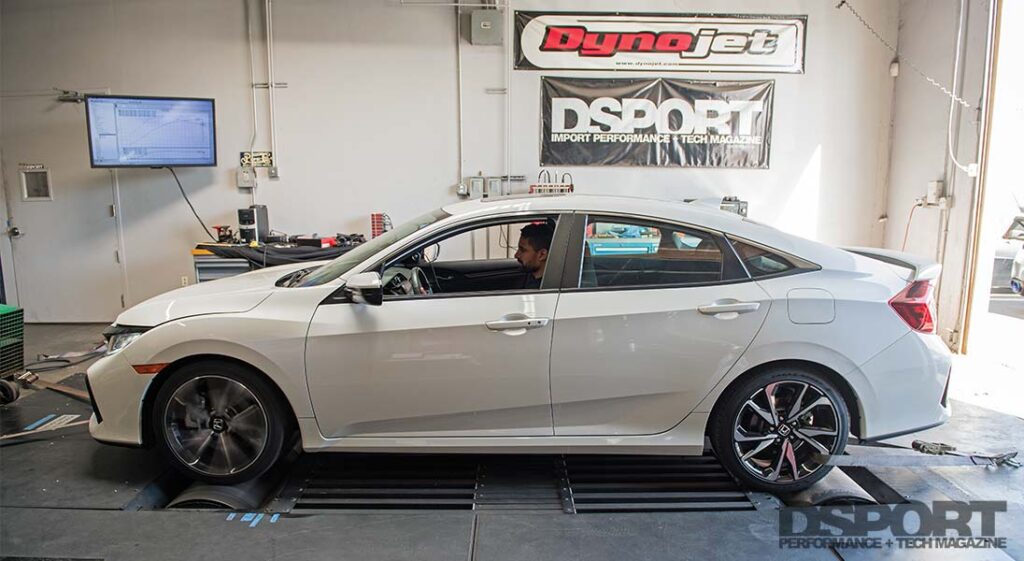 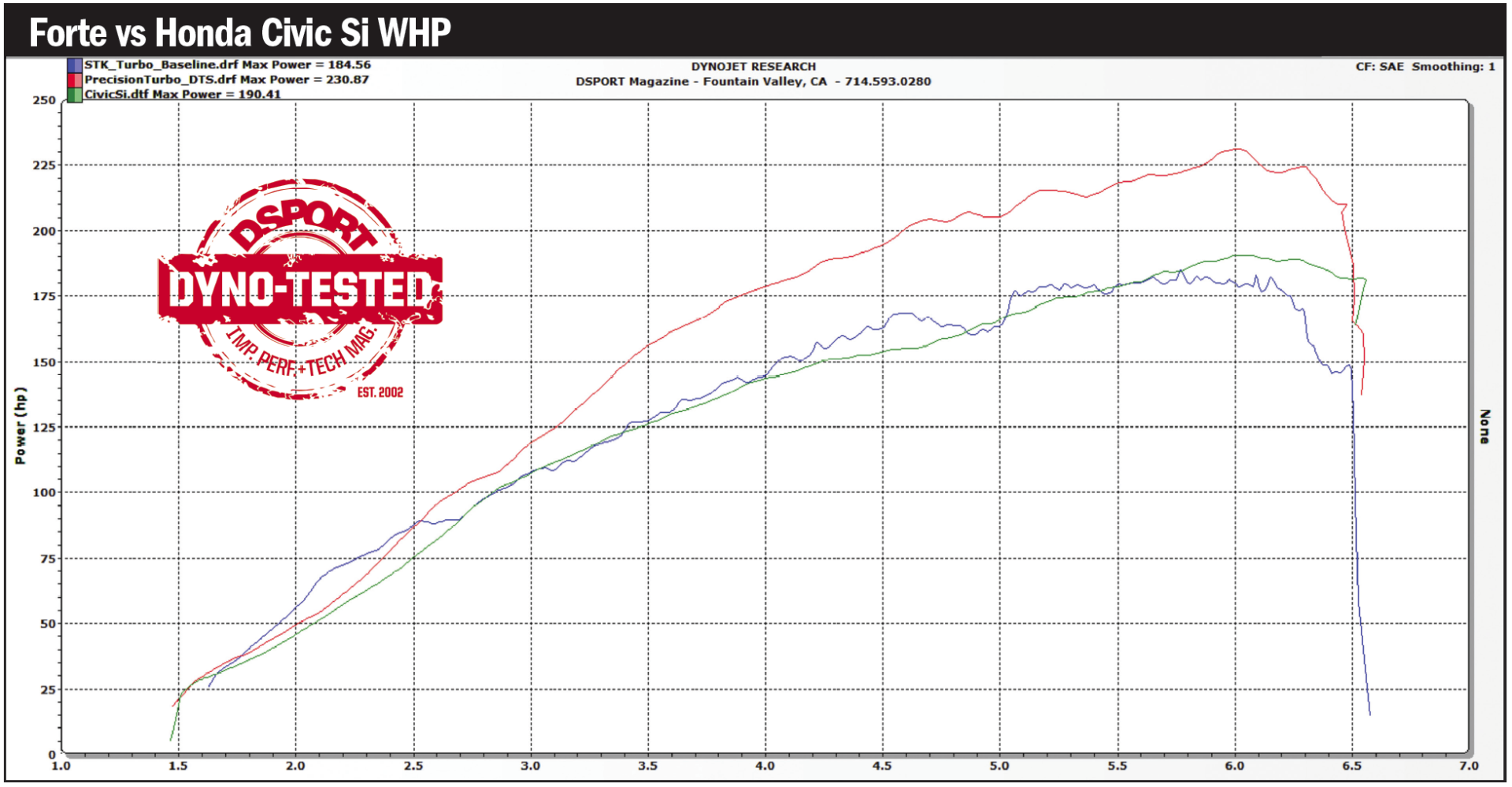 Honda’s Civic Si delivers on par performance to a Forte GT in stock form. With the upgraded Precision turbo and DTS Systems Power Control unit on the Forte GT, it’s no contest. The Forte GT delivers 230.87 horserpower now, about 40 wheel horsepower more than a stock Civic Si. After ECU tuning and optimization of timing, fuel and boost tables, we expect to see an additional 20-to-40 more horsepower at the wheels. However, if we encounter any bottlenecks we may hit a performance wall before reaching that goal. Stay tuned.

No Abundance of Caution

Are you getting sick and tired of hearing the “out of an abundance of caution” rational for why things that used to be cool or fun now suck? The world doesn’t need an abundance of caution; it just needs the proper amount. However, since an abundance of caution exists, we needed to do something with a deficiency of caution to try to restore equilibrium. What we decided to do was a definite do-not-attempt-this-at-home adventure that involved a high degree of risk. We decided to do some dyno pulls on the upgraded turbocharger without a recalibration of the ECU. We convinced ourselves that the feedback strategies and safety measures built into the 2019 Forte GT factory ECU wouldn’t let any harm come to the engine. We also decided this would be a good answer to the “What-If” question of what happens if I install the upgraded turbo and drive the car before getting the ECU reflashed.

We answered that question. No harm will result to the engine. Even though the upgraded turbocharger can deliver more air to generate more power, the factory ECU does not let it do much. The ECU sees the expected airflow being met and turns down the boost. After seeing how well the factory ECU controlled power output with a larger turbo in place, we decided it was probably safe to try the upgraded turbo with the DTE Systems Power Control. in place. This system modifies signals into the ECU to manipulate it into allowing higher airflow and boost levels resulting in more power. When we used the DTE Systems unit on with the factory turbo, we increased peak power from 185 to 208 horsepower at the wheels. With the DTE Systems unit in place with the Precision Turbo upgraded turbo, power was increased to 230whp. 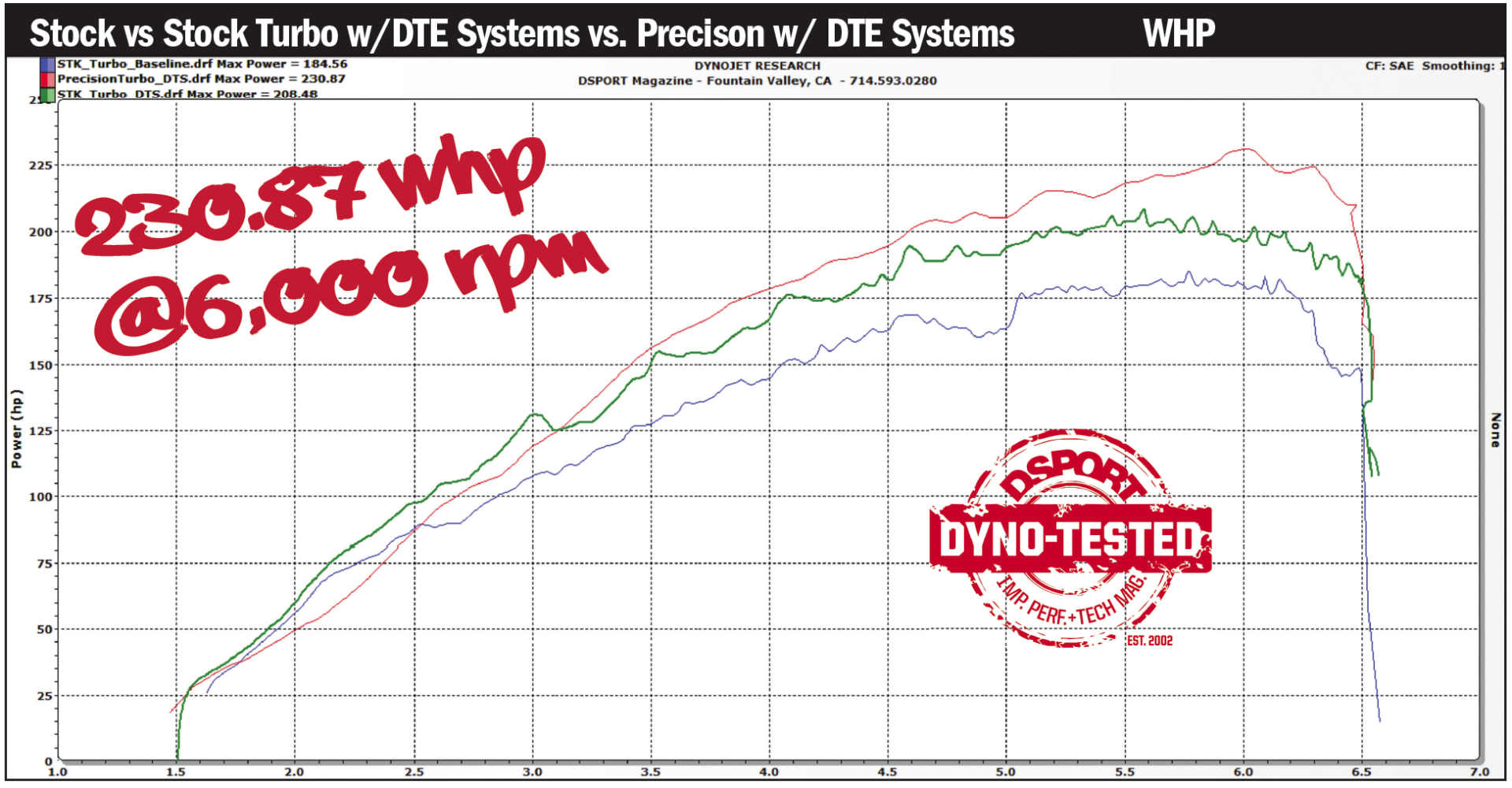 Despite not having the fuel, ignition and boost tables optimized for the new turbo, the Forte GT did surprisingly well. The power output exceeded the stock vehicle from 2,500RPM to the 6,500RPM redline. It even outperformed the smaller stock turbo with DTE Systems Power Control unit from 3,000RPM to redline. It was also surprising how much smoother the graph became. 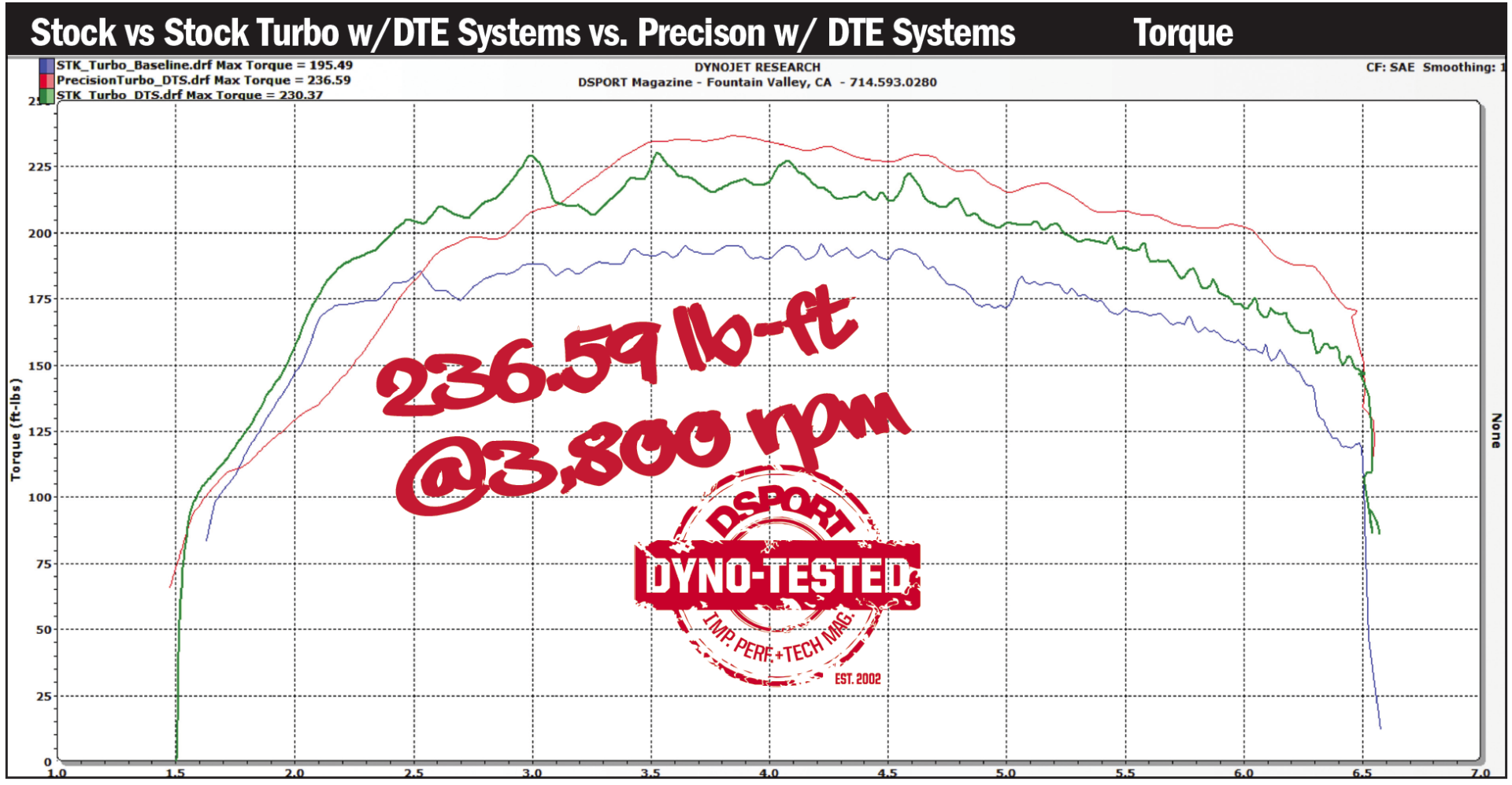 All in this Together

While 230whp is still short of the 260whp minimum that we estimated we will need to be able to beat a Civic Type R on the strip, we are quite confident that a proper tune is going to get us at least the 30 horsepower that we are shy. If numbers do not lie, we have a turbo that can get us to the 265+whp range. Unless we find that something in the intercooler or fuel system chokes off power production, we will hit target 260+whp number with a proper tune on 91-octane fuel.

If we owned this vehicle, we would also lean toward installing a water/methanol injection system. In addition to allowing the ignition timing to be advanced for some more power under boost, the water/methanol system will also keep the intake valve deposit buildup to a minimum. 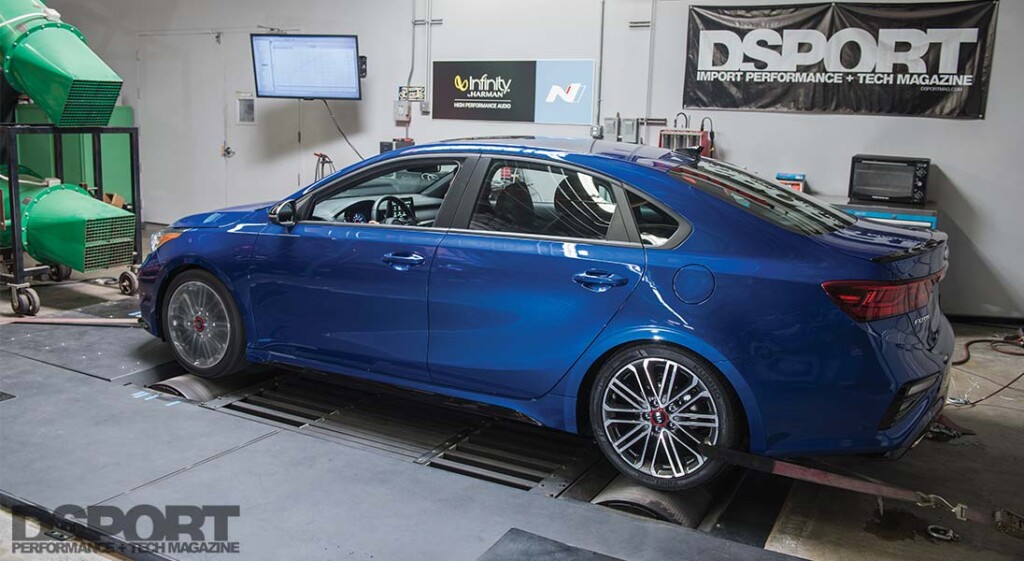 Bring on the Boost

The reopening of drag strips and racetracks around the country cannot come too soon. The DSPORT Project Forte Presented by Harman Kardon is on the path to do the seemingly impossible. With what should amount to less than $3,500 in performance upgrades, it may be able to take out a performance icon, the Civic Type-R. Best of all, there is even the possibility that the performance package may get certified to be CARB legal.