AS A MASS OF COLD AIR COLLIDES WITH AN AREA OF WARM AIR, the difference in air volumes creates instability. This atmospheric volatility sets off a chain reaction so immense that energy rips through the sky igniting the very air it passes through. So much happens in such an instant that the only evidence of this reaction is a flash of lightning followed by a bone-shaking rumble of thunder. A built engine, massive air and fuel delivery along with precise tuning can produce thunderous performance from a vehicle. Ivan Vallejo’s 2004 Mitsubishi EVO VIII is one example of the Tropic Thunder often heard in Puerto Rico. Text by Brian English // Photos by Luis A. Burgos “Yeyo” 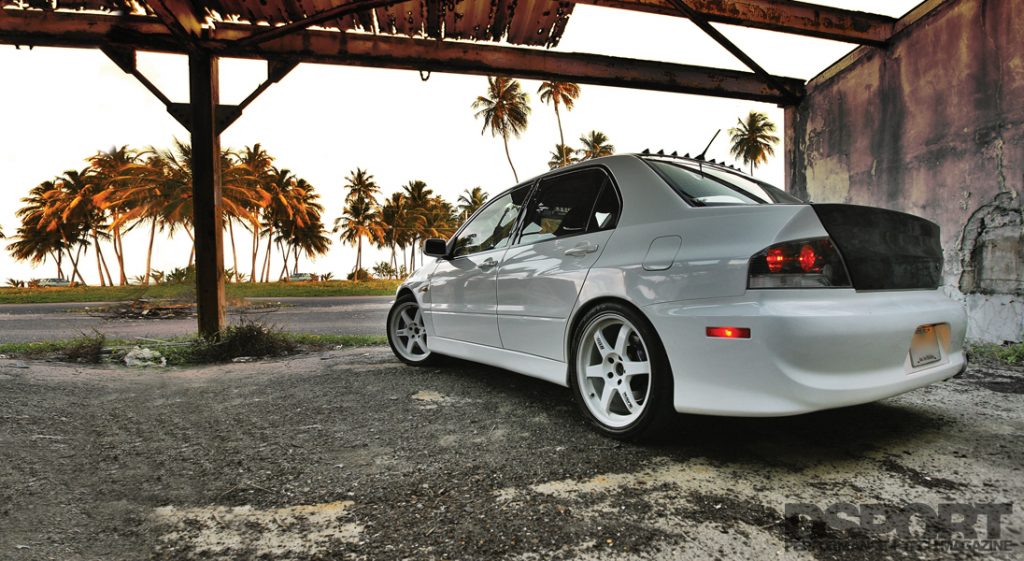 Storm on the Rise

When it comes to upgrading the 4G63 powerplant, the horsepower returns rarely disappoint. In fact, this turbo four-cylinder has a tendency to leave tuners in awe of the dyno numbers. While Ivan liked what the EVO could do from the factory, he speculated on what improvements could be achieved with upgrades. More power was the first thing to come to mind. To satisfy Ivan’s yearning for more ponies, the EVO was delivered to Ultimate Racing of Puerto Rico. Ultimate Racing started strengthening the Mitsubishi engine by preparing the cylinders for new pistons and rods. The cylinder walls were bored to 86mm and the holes were filled with Wiseco 9.0:1 compression forged pistons. The pistons link to the factory crankshaft by way of Eagle forged connecting rods to ensure the shortblock can handle extreme power. Up top, TOMEI POWERED springs and EVO VII retainers keep the Ferrea valves seated. ARP head bolts increase the reliability of the seal between the head and the block while TOMEI POWERED 270-degree cams orchestrate the valvetrain. These camshafts increase the lift and duration of valve events resulting in increased power and torque 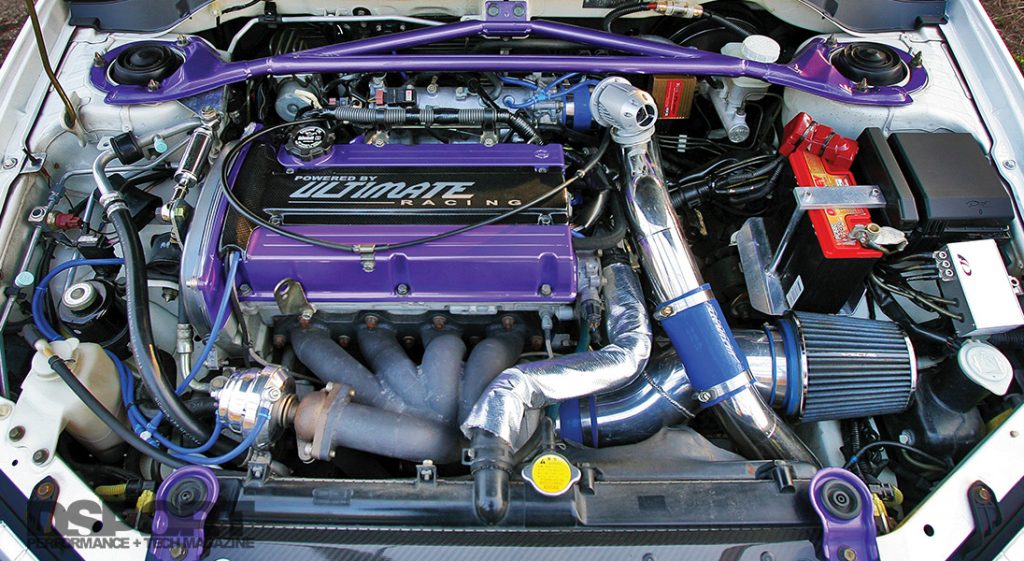 With the EVO’s engine ready to perform, Ultimate Racing bolted up its GT35R Turbo Kit. This kit consists of a tubular equal-length turbo manifold that funnels high-enthalpy exhaust gasses to the .82 A/R turbine housing of the Garrett GT3582R ball-bearing turbocharger. Once the turbo has produced enough airflow to provide 32 psi at the intake manifold, a TiAL Sport 38mm wastegate, controlled by a GReddy e-01 boost controller, diverts exhaust gasses to a dump pipe. On the cool side, air is drawn through a Spectre intake system before being pushed through the Ultimate Racing front-mount intercooler. Once cooled and condensed, the charge air rushes through the factory throttle body and intake manifold to be distributed to the intake ports. 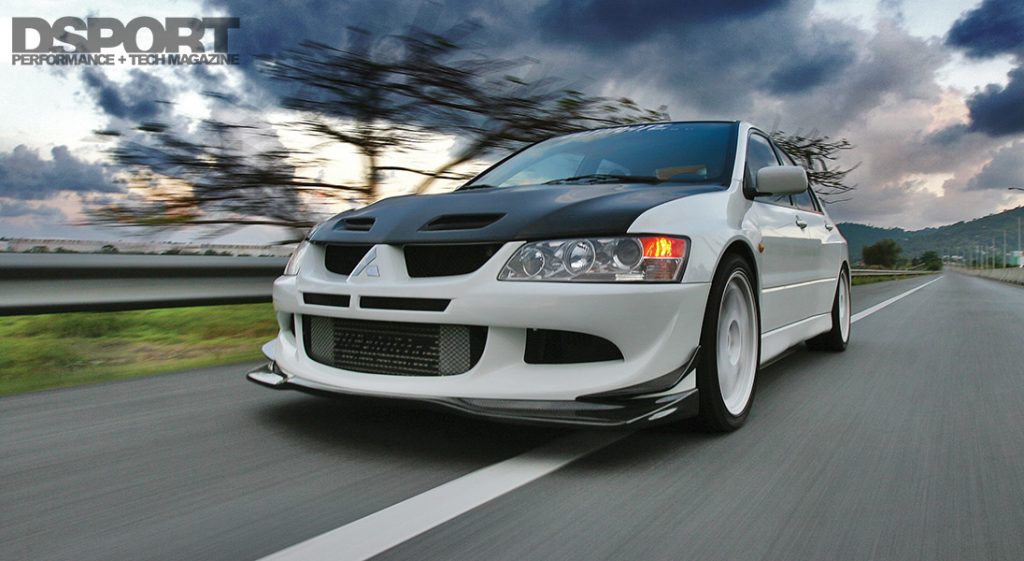 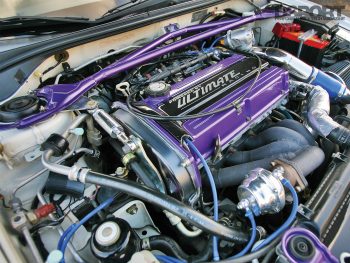 A turbo system moving such a large volume of air requires a reinforced fuel supply. An in-tank Walbro 255-lph fuel pump sucks up VP Racing C16 race fuel and rushes it to a quartet of Ultimate Racing 1,000 cc/min fuel injectors. Once sprayed into the combustion chamber, the fuel mixture is ignited by NGK BPR7ES spark plugs receiving a kick in voltage by an HKS Twin Power DLI II ignition amplifier. An HKS F- CON V Pro commands fuel and ignition activity. Big numbers were anticipated on the Dynojet dynamometer. After tuning the F-CON, this EVO spun the rollers to the tune of 599 wheel horsepower and 452 lb-ft of torque. This 253-percent increase over the baseline of 233 whp widened the eyes of the Ultimate Racing crew. 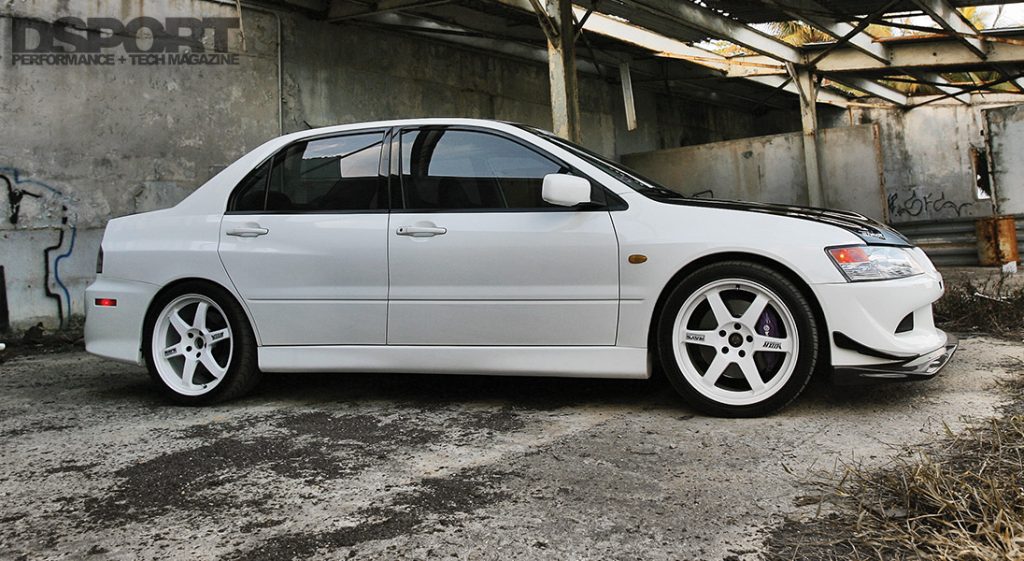 Reins for the Ponies

With more than twice the factory horsepower on tap, getting power to the tarmac becomes a difficult task. An Exedy triple-plate clutch now bolts to the crankshaft to deal with an abusive amount of torque. This torque and power then travels through the factory 5-speed gearbox and drivetrain before driving a set of Volk Racing TE37 18×8.5-inch wheels wrapped in Kumho 255/35R18 tires. D2 Racing coilovers keep the rubber glued to the asphalt while factory Brembo calipers bite into StopTech rotors to shave speed at the push of the pedal.

The appearances of the Evolution have been modified as well, both inside and out. A Kaminari carbon-fiber hood and VIS carbon-fiber trunk lid not only shed some pounds off the car, but also provide an aggressive look. A Seibon carbon- fiber front lip spoiler generates front-end downforce to further ensure that the tires are digging into the road. Inside the cabin, a Sparco “Speed” seat and Sabelt 4-point Street harness keep the driver in place. From his seat, the driver can monitor the 4G63’s exhaust content with an Innovate Motorsports XD16 Air/Fuel meter mounted in the center dash along side the GReddy e-01. 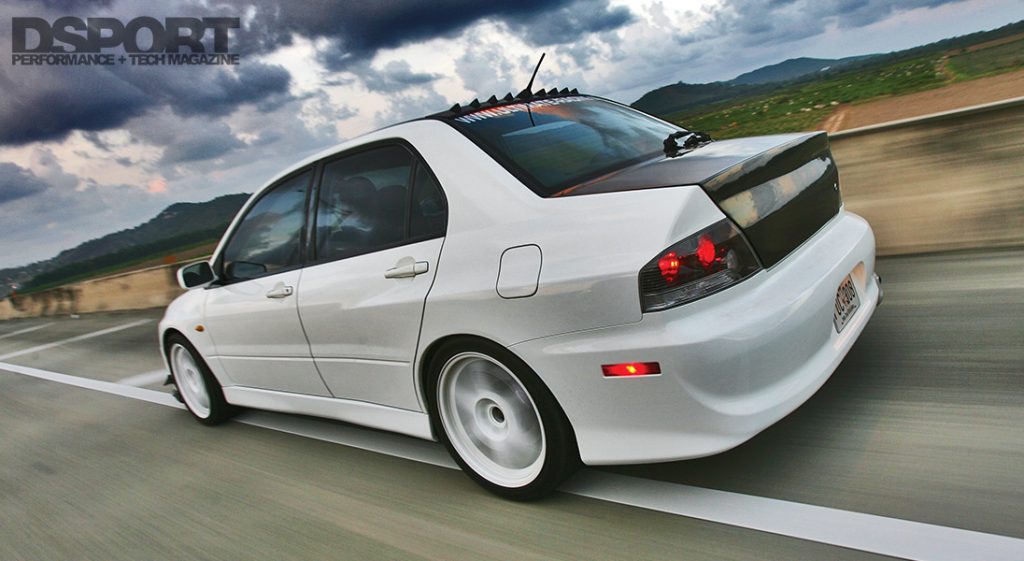 There is still more work to do before this EVO makes a pass down the dragstrip. Both an NHRA-legal roll cage and SFI-approved harnesses are amongst the safety equipment required. If the street tires don’t deliver the needed traction, DOT drag radials or full slicks will be put in place. If Ivan has his way, the 10s will be visited on a regular basis by this EVO. So while inhabitants of Puerto Rico can hear the on- coming thunder, only time will tell if this EVO will deliver lightning performance.