SEEKING ADVENTURE AND TRAILBLAZING INTO the unknown is embedded in Norwegian DNA. The Vikings of yore had no problem sailing uncharted territory. Perhaps this explains Fredric “The Norwegian Hammer” Aasbo’s interest in the new Toyota GT86 (sister platform to the Scion FR-S and Subaru BRZ). While the GT86, Scion FR-S and Subaru BRZ have been the hot topic for the better part of the last year, it’s too new to have comprehensive aftermarket support. In fact, the first FR-S wasn’t delivered stateside until May 2012 and Norway wasn’t expecting its first production unit until June 2012. Text by Richard Fong // Photos by Larry Chen @speedhunters.com 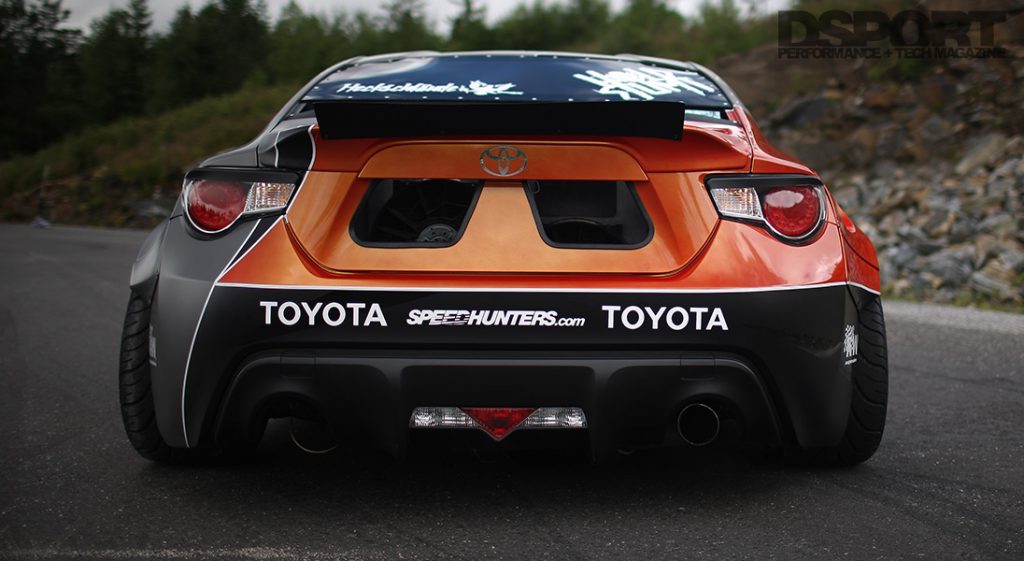 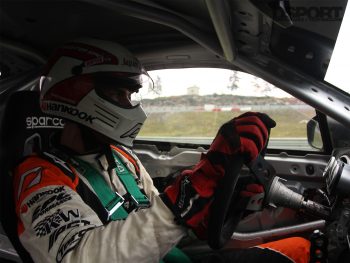 Aasbo had been working to garner support for a new European-based Toyota build for over two years. At a private demo in front of 800 Toyota executives from around the world, Aasbo finally found an audience. He recalls, “Lars Erik Åroy, the president of Toyota Norway, was in the stands watching me roasting tires at Las Vegas Motor Speedway and was curious how a small town kid from the outskirts of Ski, Norway had become ‘The Norwegian Hammer’ in the USA. Our meeting finally got the ball rolling.” Aasbo proposed a GT86 build that was well received and the project was finally put into motion. He took delivery of the first production GT86 to arrive in Norway on June 5, with a goal to make the car’s public debut at the Gatebil Festival on the weekend of July 13th. With only 37 days to accomplish the goal, Aasbo wanted to prove that he and his team were capable of producing an epic build in a short amount of time. Backed by close friends, family and Speedhunters.com, work started immediately on the GT86. 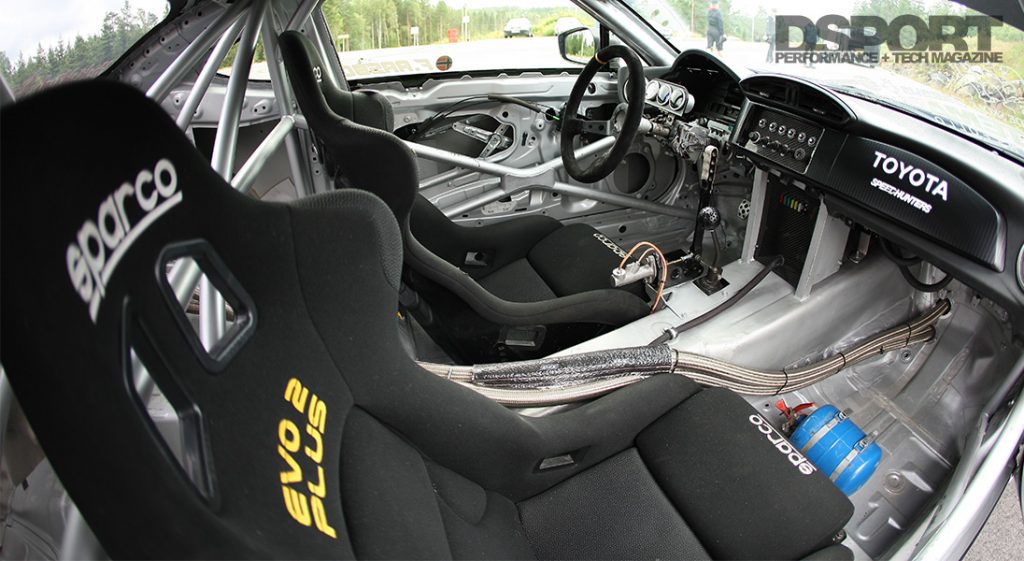 Quick! To The Man Cave!

Seeking solace from all media (except Speedhunters.com which blogged the progress of the build), Aasbo performed the entire build in what he calls “the ultimate man cave”, the garage of the Aasbo residence. With the help of his father Albert Aasbo and 15 close friends, the race was on. To start, the chassis was stripped down and prepped for fabrication. An FIA-spec cage was welded into the shell by JH Linnerud. Inside the wheel wells, a set of prototype adjustable suspension arms offering increased alignment flexibility were installed. Pee Bee Motorsport’s steering angle and roll center correction kits were also added to optimize handling for drift competition. KW Suspension Competition 3-way adjustable coilovers were chosen to suspend the chassis, absorb bumps and keep the tires planted. 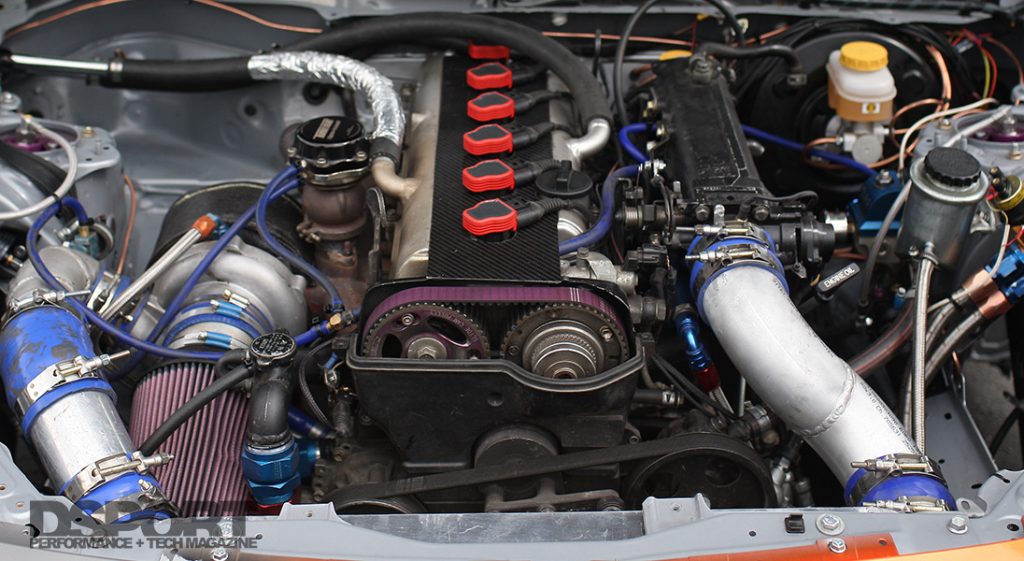 Go With What You Know

Since Aasbo and his crew were already familiar with the powerful 2JZ-GTE engine from previous Supra drift builds, it was the logical powerplant for the new project. A well-seasoned block was overbored 0.5mm and decked in preparation for Cosworth-manufactured JUN AUTO 9.0:1 compression pistons. Stock connecting rods were strengthened with ARP rod bolts while ARP main bolts were used to keep the factory crank in place. Engine builder Bjorn Deildok of SWR Performance Engineering also selected ARP head studs to secure a stock 2JZ-GTE cylinder head to the shortblock. In place of the factory turbochargers, Aasbo chose a Comp Turbo CT4 6067 turbocharger to supply boost. The turbocharger sits atop a durable SPA Turbo cast iron manifold with an external Turbosmart Hypergate 45 wastegate regulating boost. The elder Aasbo fabricated a stainless-steel 3.5-inch exhaust to channel spent gasses from the turbine outlet to the rear of the chassis. On the cold side of the turbo, compressed air flows through custom hard pipes to the BS Bildeler front-mount intercooler before the cooled air makes its way to the intake manifold. 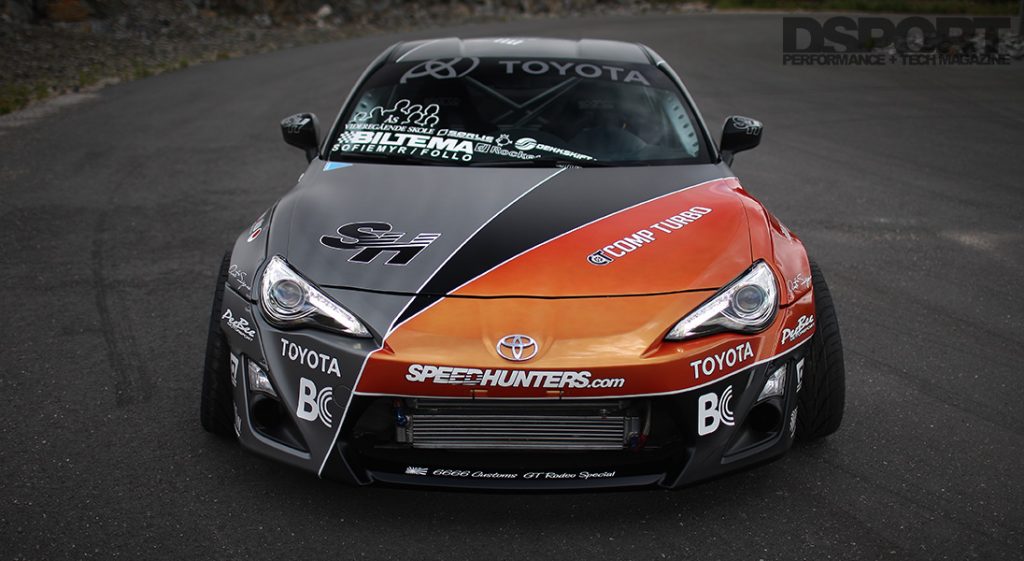 On the way to the combustion chambers, the air charge is saturated with atomized E85 fuel delivered by a six-pack of Injector Dynamics ID2000 injectors. The high-flowing injectors receive fuel by way of an Aeromotive 340 in-tank fuel pump, a fuel surge tank, dual Bosch 909 in-line pumps and Nuke Performance ancillary fuel delivery components. While it may sound like overkill for the current power level, don’t forget that you need over 40- percent more fuel supply with E85 versus gasoline. With an Autronic SM4 engine management regulating injector duty cycle and ignition-timing events, the GT86 produced 661 horsepower and 643 lb-ft torque to the hubs of a Dynapack dynamometer. 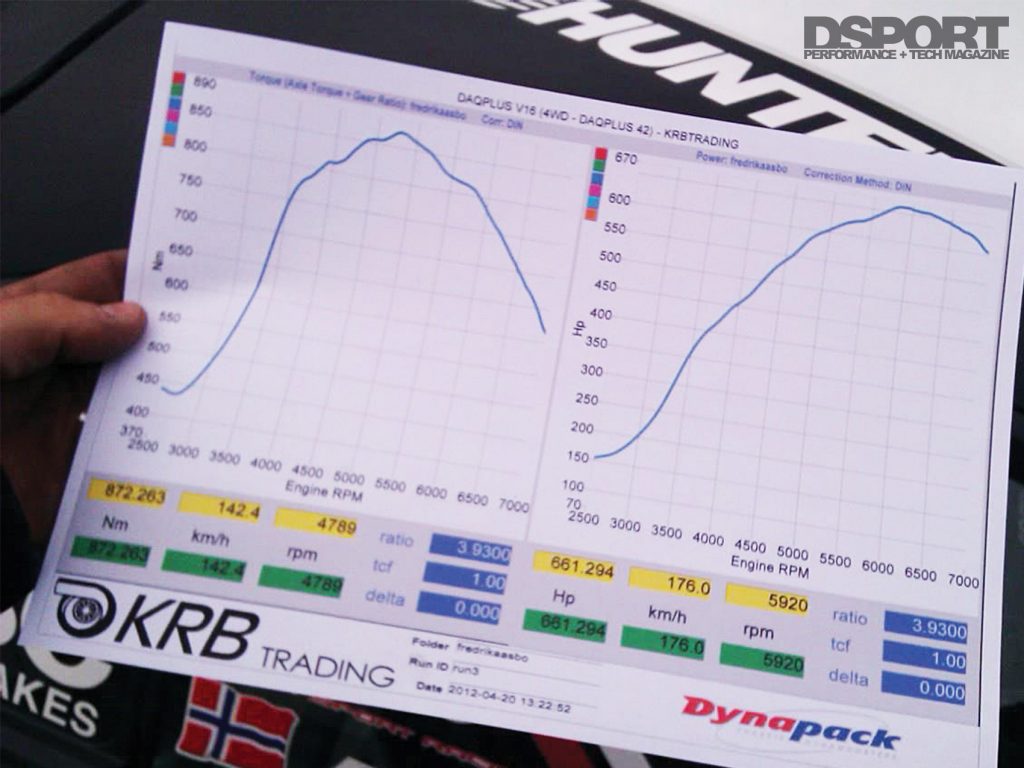 Junk In The Trunk

Since Aasbo has been working with Toyota’s powerful 2JZ-GTE in two different drift Supras, it was the logical engine of choice. Making it fit without cutting the firewall (to comply with Formula D rules) meant that the engine would take up most of the engine bay. Thus the radiator was relocated to the trunk which was modified to permit airflow for heat exchange. Since the iron block 2JZ is both longer and heavier than the stock aluminum FA engine, the chassis was thrown out of balance. Shifting the radiator to the trunk helped to offset some of the extra weight in front of the axles. This also freed up space to employ a large front-mount intercooler. With adequate venting cut out of the trunk lid, Aasbo stated, “The cooling seems to be spot on (in testing) and I’m very happy it worked right out of the box.”

Get Going, Get Gone

To turn horsepower into movement, an ACT custom 7.25-inch triple-disc clutch transfers power to the input shaft of a Mid Valley NC500 4-speed transmission. The NASCAR-spec H-pattern dog box sends power through the factory rear end and axles to the Motegi Traklite wheels mounted with Federal tires supplied by Dekkskift.no for the Gatebil Festival.

The First Of Its Kind

Once the prototype Rocket Bunny body components arrived from Kyoto, Japan, the parts and the shell were brought to Ås VGS Technical University. There, the overfenders and accent pieces were fitted and painted by the students guided by teacher Espen Enerhaugen. Once back from paint, Speedhunters livery designed by Andy Blackmore, Michael Creighton and Aasbo himself were cut and applied by Erik at Auto Sign.

As the most anticipated new tuner platform released from Japan, a number of companies have hit the ground running to develop parts for the new ZN6 chassis. One of the hottest aero kit makers in Japan, TRA Kyoto / 6666 Customs, has also been quick to embrace the new Scion/Subaru/Toyota platform. The company’s incredibly popular Rocket Bunny kit for the Nissan S13 and S14 chassis had anxious owners waiting for its unprecedented release. Aasbo received one of the first kits for his 86-X drift car, which included front and rear over fenders, front and rear bumper accents, and side skirts. 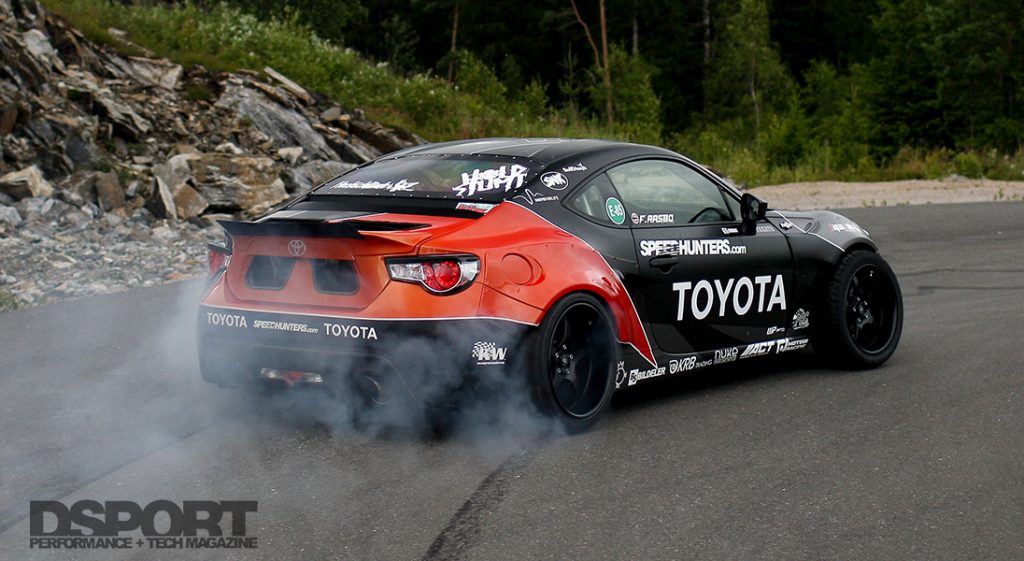 Although the build happened within the confines of the Aasbo residence, it involved an international effort of global proportion. Aasbo reflected, “An impressive roster of sponsors and partners carrying out various parts of the project around the world are what made this build possible. For example, ACT worked on the custom clutch and bell housing in California, while KW Suspension worked on the coilovers in Germany and TRA Kyoto prepared the prototype Rocket Bunny kit in central Japan. The list is extensive, and without everyone’s timely development and involvement, we would not have finished the entire build in only 37 days. We made our deadline and the GT86 was a hit at the Gatebil Festival.” With more development time, a larger engine and more fabrication in its future, Fredric’s GT86 should be dialed in and ready to take on the best that Europe’s drifting community has to offer. Fredric would like to thank Lars Erik, Håkon and Espen at Toyota Norway, Rod Chong of Speedhunters.com, Bjorn, Marius #1 and Marius #2, Roy, Thomas, Christian, Lars, Mad Mike, Ben, Wenche, Camilla, Henning, Ingar, Christer, Kai Roger, Espen, Tom Ole and the awesome students and teachers of Ås VGS. Finally, a grateful thank you to his parents for their time, support and patience with the non-stop noise.