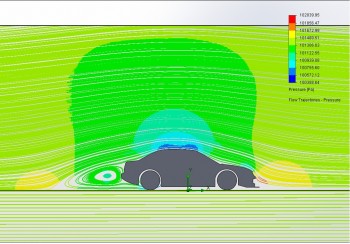 The cost of renting a wind tunnel makes little to no sense for anyone at the consumer level, unless you’ve got an unbelievable budget to burn. Using a two-dimensional side profile of the STI, Jager Racing employed CFD software to qualitatively analyze and evaluate the pressure distribution around the body. To quantitatively analyze the aerodynamics of the STI, a technique known as tufting was employed. By attaching pieces of yarn all over the body, the STI was driven around while video footage of the yarn’s movement was collected. This helped to identify where air is attached and detached from the surface of the car. Formula 1 designers use pressure sensors to measure pressure around the vehicle. This equipment is expensive and sophisticated. The budget alternative that Jager Racing employed involved old industrial pressure gauges measuring different areas around the body. These measurements were then compared with the predicted figures generated by the CFD software. 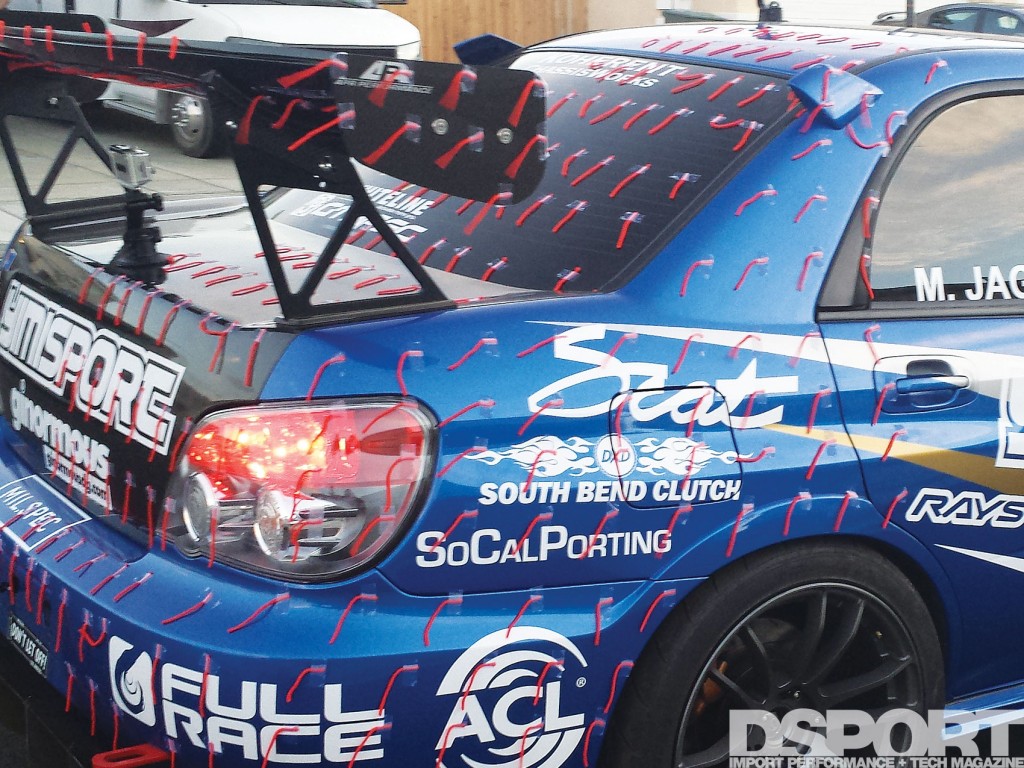 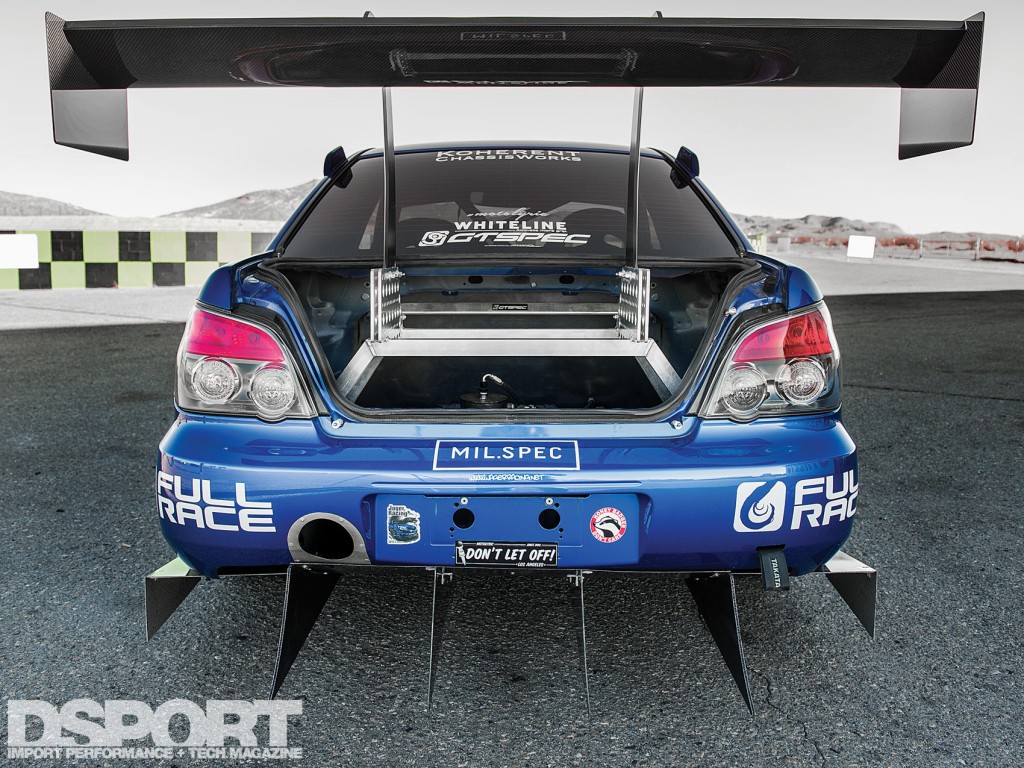 The beauty of time attack is the flexibility of certain portions of the rules. In the case of aerodynamics, the rules permit some innovation and therefore, some flexibility compared to other forms of racing. To improve the downforce being applied to the chassis, Jager enlisted the help of Ramitha “Rami” Edirisinghe, an engineer at ACT and a member of Jager’s team. Rami helped with the data log analysis and the subsequent aerodynamics adjustments a er each session. A Wasp Composites splitter and canards add downforce over the front wheels while an APR Performance GT-250 carbon-fiber wing with swan neck wing stays apply pressure onto the rear tires.

While preparations and the engine build prevented him from competing at the first round of the Redline Time Attack series in 2014, Jager managed to compete throughout the remainder of the season in both the Redline and Global Time Attack series. He improved at each event, setting class and overall records at just about every venue he competed at. He concluded, “Working with Yimi Sport Tuning and having an amazing team composed of Paul Leung, Gil Martin, Ken Kasitz, Rami Edirisinghe, Aaron Gillis, Alex Goss and Rob Cambell to support the racing e orts made all the di erence for setting records and reaching our goals. For 2015, we’re planning to increase the power, change up the suspension, improve the aerodynamics and change tire compounds. We want to take the challenge to the modified and limited classes.” With venues for road racing and time attack in operation, Jager is able to quench his thirst for speed while claiming records he never imagined he could reach. With a solid machine backed by a stellar team, Jager aims to make 2015 another year of records. 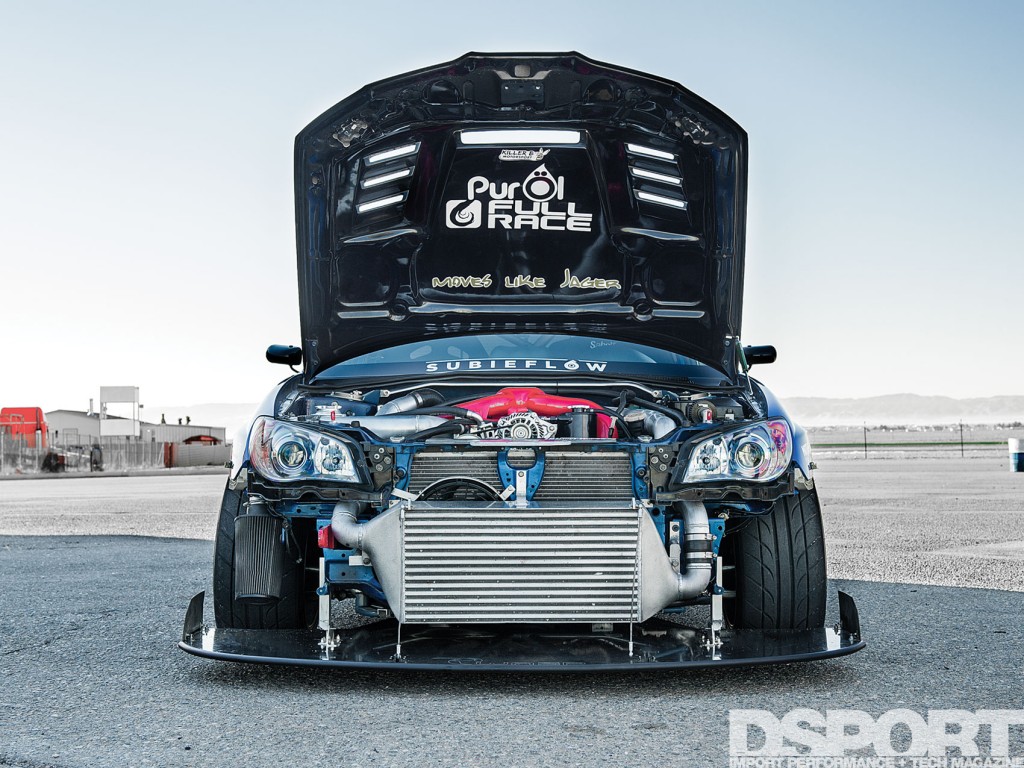