Now that you know all of the basic parts of an engine and what they do, it’s time to understand how they work together in a system. Almost all cars use 4- stroke engines to turn the chemical energy of gasoline into power. Manipulation of the 4-stroke cycle is essential for obtaining more power from an engine. As such it’s important to know what the different parts of the cycle are and exactly how they affect power output. 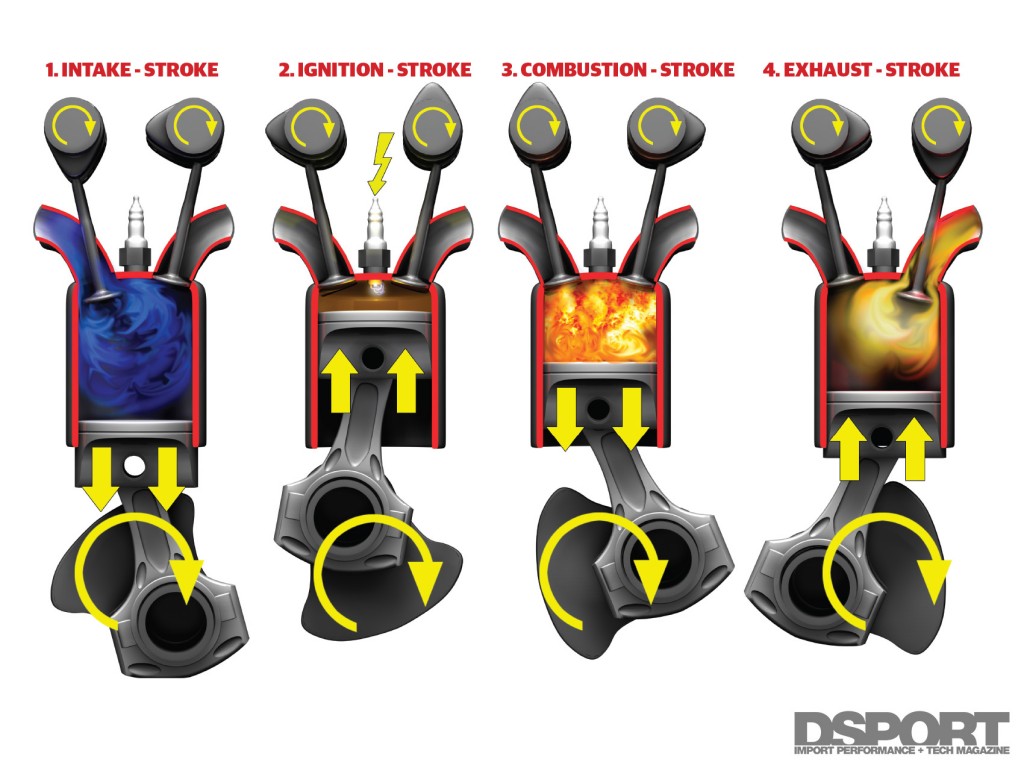 If you stop to think about it, the first step of the 4-stroke power cycle is the one where your engine sucks. We’ll start with the piston at the Top Dead Center (TDC) position – that’s the point where the crank has pushed the rod and piston combo to the uppermost point for the beginning stroke of the 4-stroke cycle. At TDC, the intake valve is starting to open as the exhaust valve is closing; remember, these opening and closing events are controlled by the camshaft lobes. As the crankshaft continues to turn, the connecting rod starts to pull the piston down the cylinder. The crank and the camshaft are linked by a chain or belt so as the crank turns, the camshaft (or camshafts) are also turning. The intake lobe on the cam lifts the intake valve until it is fully open, while the exhaust portion of the cam is allowing the exhaust valve to fully close.

The downward-traveling piston creates suction in the cylinder so the incoming air and injected gasoline from the intake manifold are drawn into the cylinder during this intake or “suck” stroke. This continues until the piston is all the way to the bottom of the crank’s stroke, BDC or Bottom Dead Center. Because of the shape of the camshaft lobe, the intake valve is almost totally closed by the time the piston is at BDC. At the end of the intake stroke we are left with a cylinder full of fresh air-fuel mixture with a closed exhaust valve and a rapidly closing intake valve. We are ready for the next cycle.

Squishing, smooshing, compressing – whatever you want to call it, this is what’s happening in the second stroke of the 4-stroke cycle. In this stroke, the piston starts its trip up the cylinder bore as it is pushed by the crankshaft and the connecting rod. At this point, the intake and exhaust valves are fully closed as the piston is forced upward and the air-fuel mixture is compressed. This compression forces the fuel and air molecules closer together until they become a highly-reactive combustible mixture. The closer the molecules are together, the easier it is to get them to ignite. When the piston nears TDC again, the ignition system fires the spark plug, triggering combustion in the cylinder.

You guessed it; this is the big bang, el combustion. By the time the piston is at TDC the combustion of fuel and air in the tightly-contained and highly-compressed cylinder is well underway. The heat and pressure of the combusted air and fuel mixture increases rapidly and the piston is forced back down the cylinder. The pressure generated by the combustion is the driving power that spins your wheels and propels you down the track or around the turn. As the piston is pushed down the bore the cylinder pressure decreases. As the piston nears BDC again the exhaust camshaft lobe starts to open the exhaust valve, getting ready for the final stroke.

By design, a 4-stroke engine has one power stroke in each cylinder for every two revolutions of the crank. Since a cam has only one bump on each lobe the entire camshaft is driven at half the engine speed. This means the camshaft lobes will open the valve at every other revolution of the crank.

All of this opening, closing, banging, sucking and combusting may seem like an awful lot to happen in one complete cycle. But the reality is that this happens on an order of magnitude closer to the engine turning 5,000 to 7,000 revolutions-per-minute. At 7,000 RPM, the 4-stroke cycle would be repeating itself at a rate of about 60-times-per-second in each cylinder. At that speed it’s easy to imagine an uninterrupted flow of power coming from this seemingly herky-jerky system.