THE LAUNCH IS WHERE IT ALL BEGINS, AND HOOKING UP makes all the difference regardless of whether it’s a lightto- light skirmish or an attempt to set a record down the 1,320. For Devin Schultz, getting the jump on his AWD friends while driving a FWD proved to be quite the challenge, as he battled wheel spin at practically every starting line. Schultz recalled, “I was tired of the constant wheel spin associated with two-wheel drive vehicles and wanted an all-wheel drive. I had several friends with AWD Galants, Talons and Eclipses, which is where my interest and love for the driveline began.”

A Tale Of Two Talons

[pullquote]THE 4G63 POWERPLANT RECEIVED MULTIPLE TURBOCHARGER AND HARDWARE CONFIGURATIONS…BEFORE BLASTING ITS WAY INTO THE MID-8-SECOND RANGE.[/pullquote] Schultz eventually purchased his first all-wheel DSM platform, a 1995 Eagle Talon TSi, enjoying the benefits of AWD and the power output of the stout 4G63 engine. He experienced few losses during street encounters and hit the 9.9 second mark after four years of tuning, trial and error. He then purchased a second all-wheel-drive Talon from a friend. As the 1996 chassis was cleaner than the first, it served as the foundation for Schultz’ next effort to break the 8-second barrier. Over the course of the next four years, the new chassis went through an evolutionary process, allowing Schultz to learn and experience the ins and outs of the platform as the build progressed. The newer Talon also served as a demonstration car for a number of different tuning shops before Schultz went into business for himself, establishing Boostin Performance. Under the Boostin Performance moniker, the 4G63 powerplant received multiple turbocharger and hardware configurations, eventually setting numerous records in the nine-second range before blasting its way into the mid-8-second range in its current configuration. Its ferocity and achievement at the drag strip earned it the nickname, “Red Demon.” 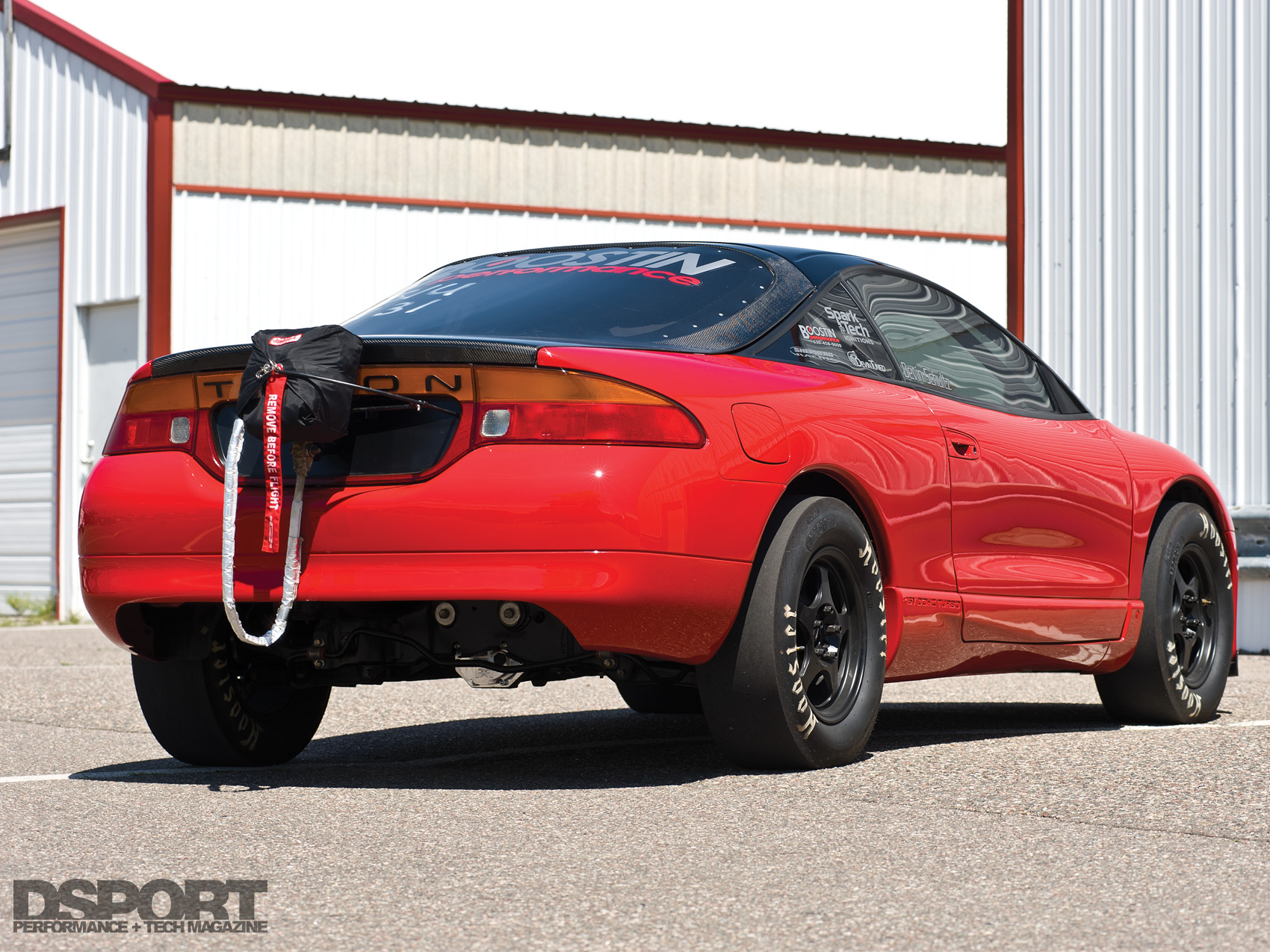 Schultz had always believed that the key to drag racing success was to build upon a solid foundation, both literally and metaphorically, since any additional horsepower would be useless if it didn’t reach the ground. In preparation for the greatly-increased horsepower levels, Schultz initially sought to reinforce the driveline before the majority of work began. To start, a Quarter Master twin disc clutch was employed to transfer power from the crankshaft. On the input shaft receiving end, the Talon was equipped with a Pfitzner Performance Gearbox first-through-fourth gearset with dog engagement assembled by Shepherd Transmissions. Boostin Performance’s 300M transfer case upgrade (which includes a larger output shaft, modified output shaft port and a proper yoke) was performed to ensure that power received would reach the differentials. The front differential was stuffed with a KAAZ limited-slip differential while Boostin Performance modified the existing viscous differential with shimmed spider gears (for better lockup) to transfer power to the rear wheels. The driveline combination is responsible for transferring the copious amounts of horsepower that allows the Red Demon to run consistent and repeatable 8- second timeslips. 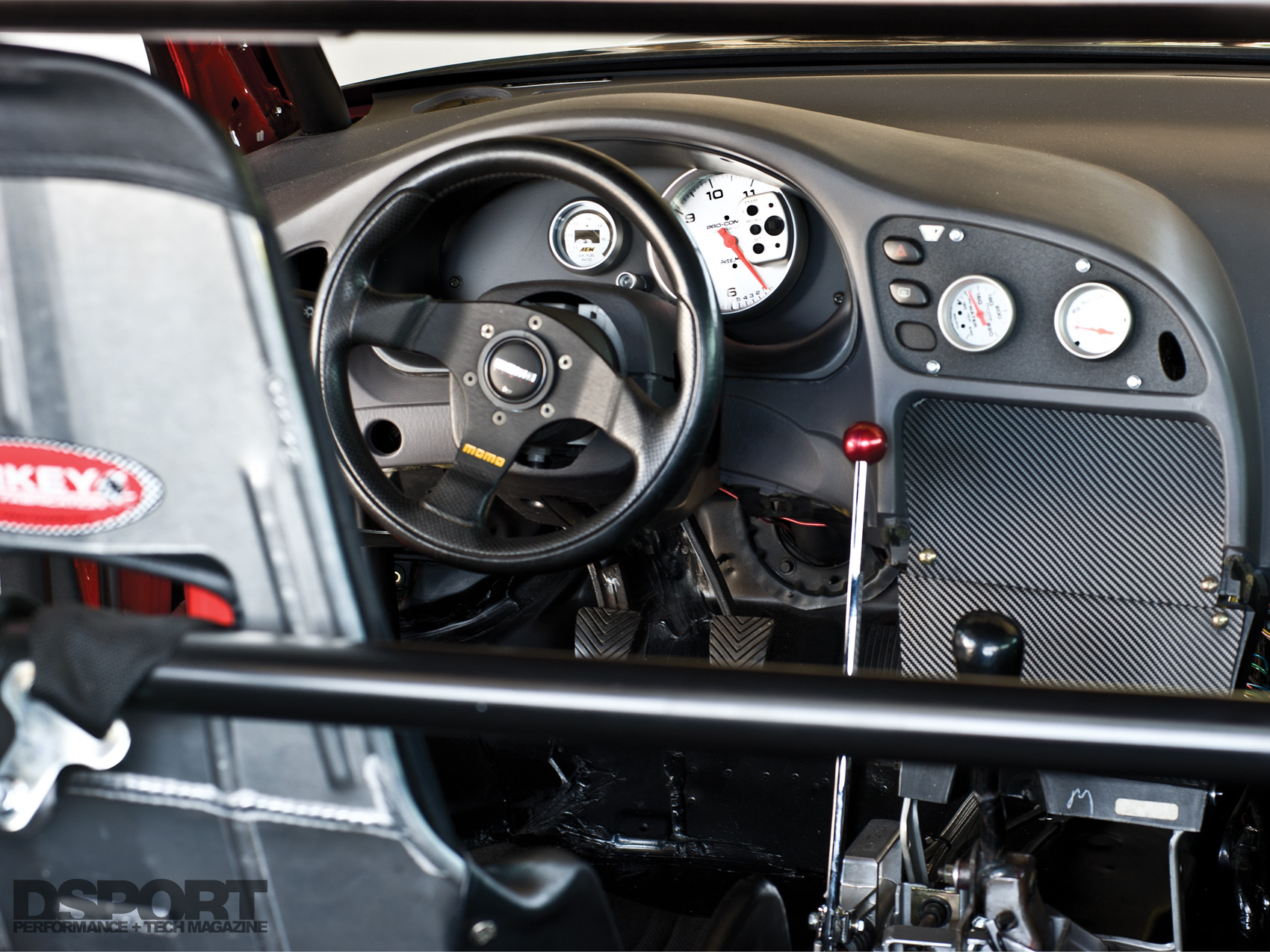 A Monster Under The Hood

[pullquote]THE MITSUBISHI IRON BLOCK WAS OVER-BORED 0.5MM AND FILLED HALFWAY WITH CONCRETE[/pullquote] What gives this beast its roar is a fortified 4G63 engine. The Mitsubishi iron block was over-bored 0.5mm and filled halfway with concrete for additional structural integrity, ending with a total displacement of 2,021cc. A set of oversized Wiseco HD pistons were used to fill the cylinders while a quartet of Manley Turbo Tuff I-beam connecting rods connect to the factory crankshaft and complete the rotating assembly. Up top, the Boostin Performance-ported cylinder head was equipped with a set of Kelford 280-degree camshafts controlling a Supertech dual-valve spring and titanium retainer valvetrain upgrade. ARP L19 head and main studs were used in the final assembly to help contain the increased cylinder pressures. 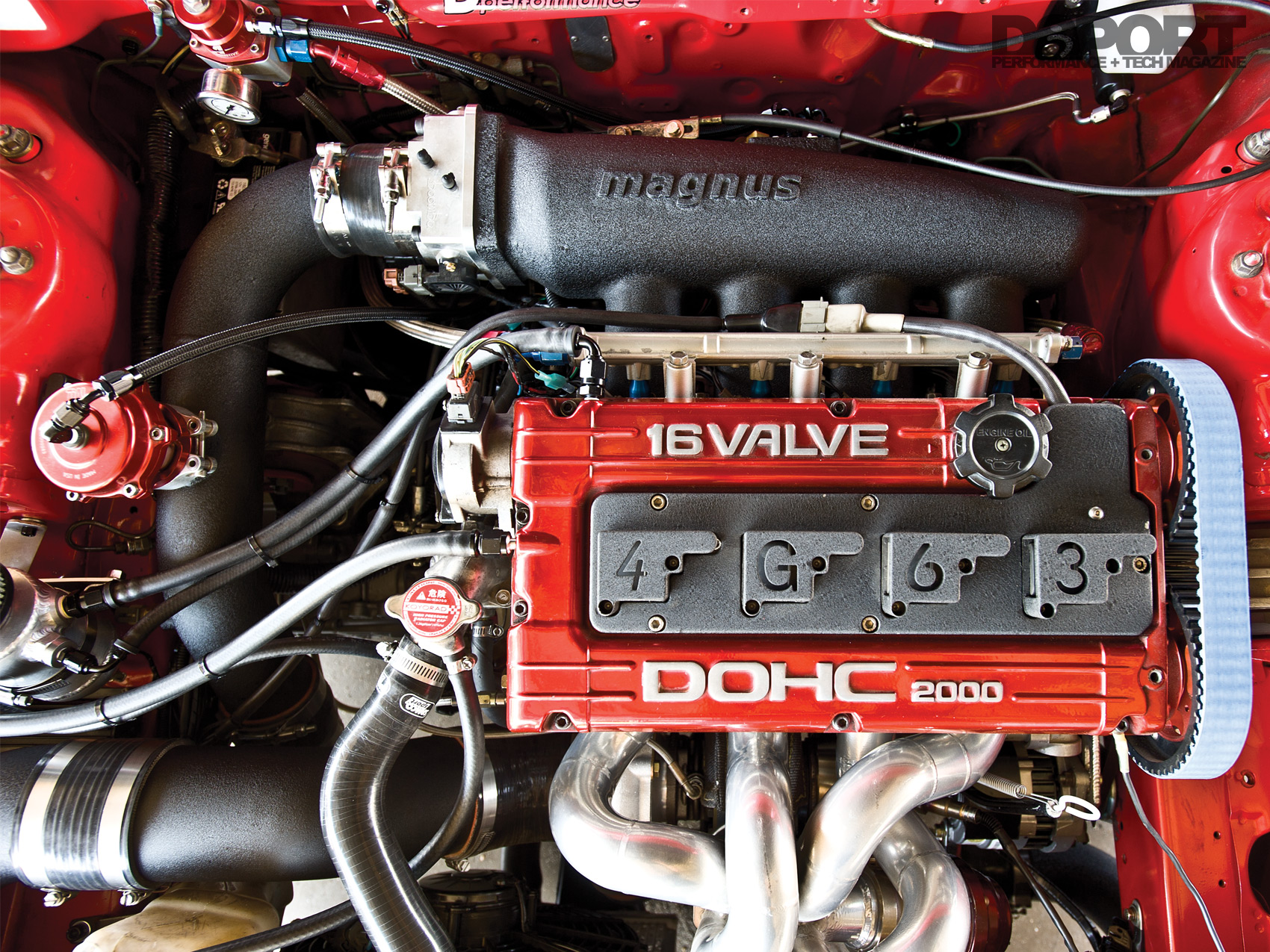