There comes a point in many children’s lives where they put prized possessions into a time capsule, bury it in the yard and forget about it as time passes. When it’s time to unearth the capsule, the contents seem to gain more value and appreciation. Such is the case with Project Time Capsule, a 2000 Nissan Skyline GT-R (R34) which sat in storage for the last decade, waiting for its time to return to the spotlight. That time has finally come, as the D’Garage R34 GT-R will soon be pulled apart and rebuilt with some of the newest components on the market.

Text and Photos by Stanley Yee 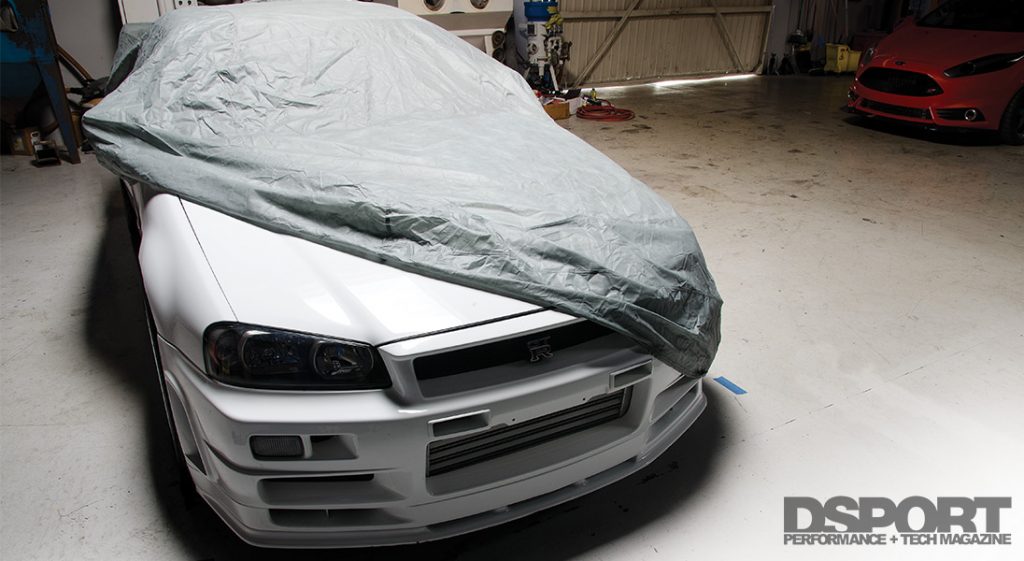 Back in the early 2000s when it was last an active project, the car benefitted from the best technology available at the time, but technology has since come a long way. To put it into perspective, Project Time Capsule comes from the time when the Motorola RAZR flip phone was the hottest cell phone on the market. When it’s finished, the car will showcase just how far technology has progressed, and Time Capsule will be transformed into a modernized example of the prestigious R34 GT-R. 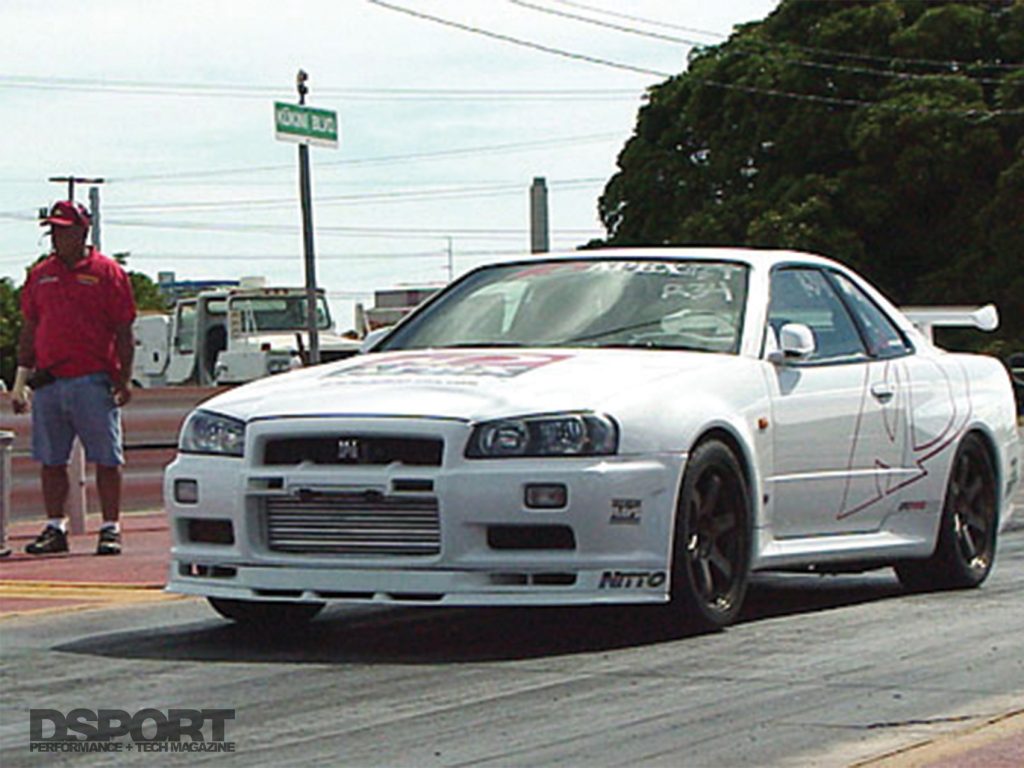 To understand the relevance of Project Time Capsule, one must first know its history. Its story starts at the beginning of the new millennium, where it started as a standard 2000 Nissan Skyline GT-R R34 V-Spec, fresh off the boat from Japan. The car was purchased by DSPORT’s current Business Director Toshi Hayama, who has been its only owner. Toshi played a pivotal role in bringing A’PEXi products stateside, and his R34 was used as a platform for product development. It wasn’t long before the car went through its first of many builds, each one more comprehensive than the last.

Nissan’s robust RB26DETT has long been the defining feature of the R34 Skyline GT-R, serving as the centerpiece of the car’s build. The original engine featured a mild setup utilizing the factory bottom end, mild cams and a pair of upgraded bolt-on turbos. This setup made 430 horsepower, but vibrations loosened a rod bolt which sent a connecting rod through the side of the block, destroying the engine. Its second engine fell victim to a deck machining issue, blowing a head gasket and leading to a third engine. After strokes of bad luck with the first two engines, it was decided that the third would be fully built to handle any abuse thrown its way. Starting with an RB26DETT N1 block, the new engine was reinforced with a collection of hardware from the A’PEXi parts catalog, including a built bottom end, headwork and all of the supporting hardware and accessories to back it up. Fortunately, the extensive overhaul paid off, and the third engine performed reliably as intended. 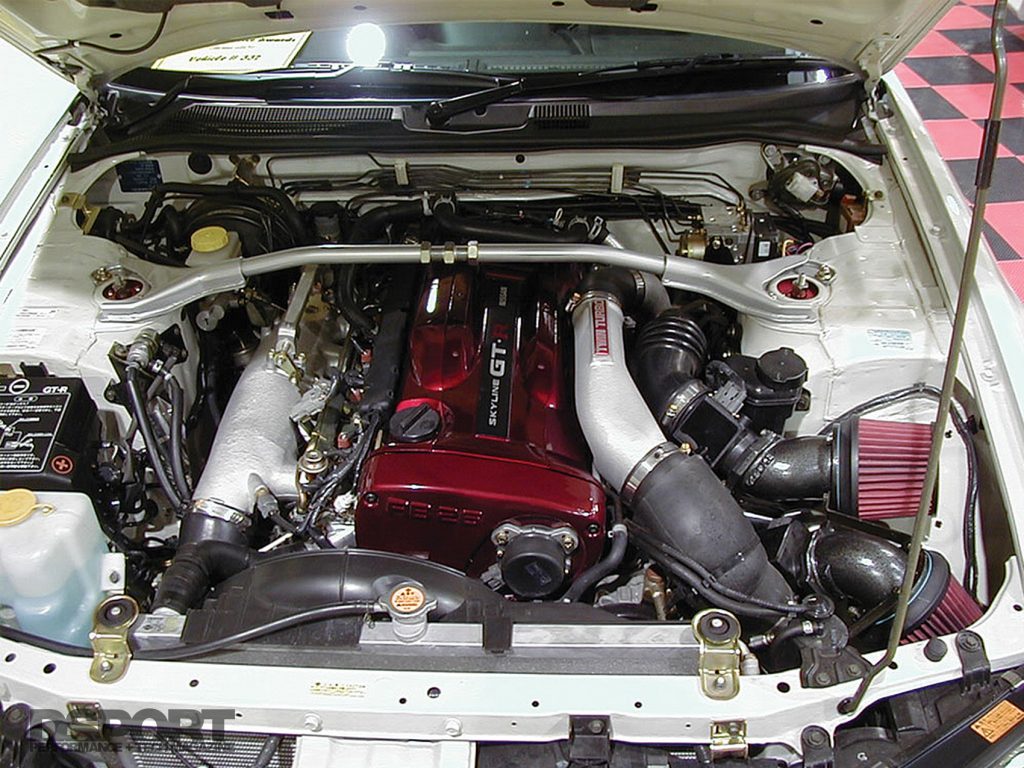 Project Time Capsule has been through several different engine and turbo setups, which were tested on the street and at the track. 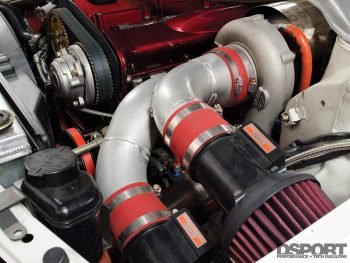 With its freshly built and strengthened engine, it was time to find a turbo solution to match the car’s prowess. Its initial setup used a pair of IHI RX6B turbochargers like those used in the 8-second A’PEXi V-MAX Skyline drag car, and the 1,200+ horsepower DSPORT R33 GT-R. While the twin RX6s had enormous power potential, they exhibited a key tradeoff hindering drivability: massive turbo lag. With the factory 2.6-liter displacement, full boost wouldn’t kick in until around 6,000 RPM, rendering the power band too difficult to exploit outside of drag racing. Even after flying an established GT-R expert all the way from Japan to tune the engine, the RX6s were removed before a full power tune was finished, and the focus switched to finding a more responsive turbo solution. After removing the pair of RX6s, attention once again turned to A’PEXi, which had been busy developing its line of single turbo solutions for the RB26. Outright horsepower would be lower than the twin RX6s, but a smaller single turbo could provide far better response and drivability to match the car’s goal. The A’PEXi AX75F82 single turbo was eventually selected for its ability to produce over 500 horsepower with minimal turbo lag, suiting Toshi’s do-it-all goal. The updated single turbo setup was tuned to produce 471 horsepower and 439 lb-ft of torque on a Dynapack dynamometer, far from the quadruple-digit horsepower potential of its previous twin-turbo setup but favored for its improved response and simplicity. Satisfied with the setup and tune of the R34, Toshi brought the car to various track events and drag strips, making full use of its street and track capabilities.

After a few years of driving on the street and at track days and drag strips, the car was put into storage, where it remained for the better part of a decade. During that time, it was seldom driven, moving only a few hundred miles to and from different storage locations. Other than the occasional oil change and battery replacement, the car went virtually untouched, sitting nearly identical to how it sits today. 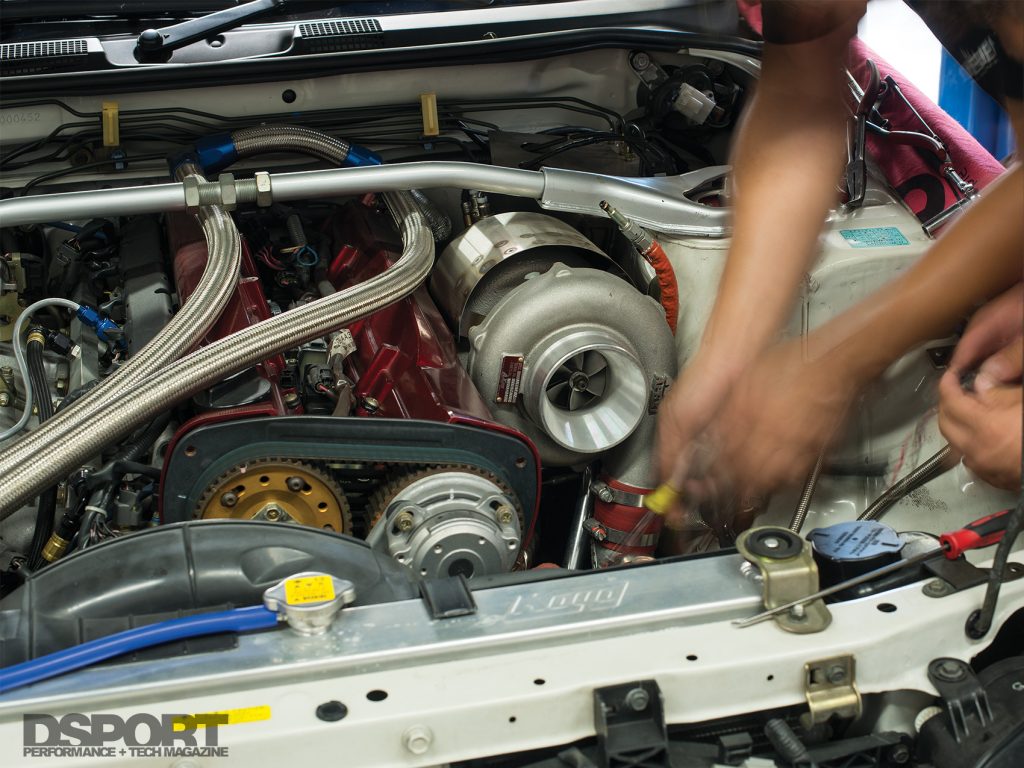 Fast forward more than ten years, and it’s finally time for the car to return to its former glory. Despite being a 2000 model year, the R34 has less than 20k miles on the chassis, making it a prime candidate for another build. Before the car gets updated with all new parts, however, it first needs to be brought back to running condition for a baseline test. 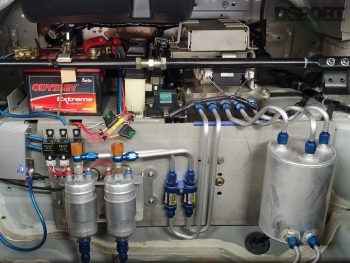 As expected, years of inactivity opened the door for some temperamental behavior from the RB26. Past tuning work showed inconsistencies in camshaft and ignition timing, which were reset to develop a conservative baseline map. Further inspection of the engine revealed low cylinder pressures, ranging from 120-140 psi per cylinder. A subsequent leakdown test revealed less than five percent blow-by, ruling out piston rings as possible culprits. During its time in storage, the fuel system had been partially disintegrated by stagnant fuel, which leaked once the car was started. An XRP inline fuel filter and fuel lines successfully stopped the leaks, and it was strapped to the dyno for its baseline testing. Despite these small issues, the car was conservatively tuned by Koji Arai on low boost, and put down 414 horsepower and 320 lb-ft of torque on DSPORT’s Dynojet 424xLC2 Linx Dynamometer. 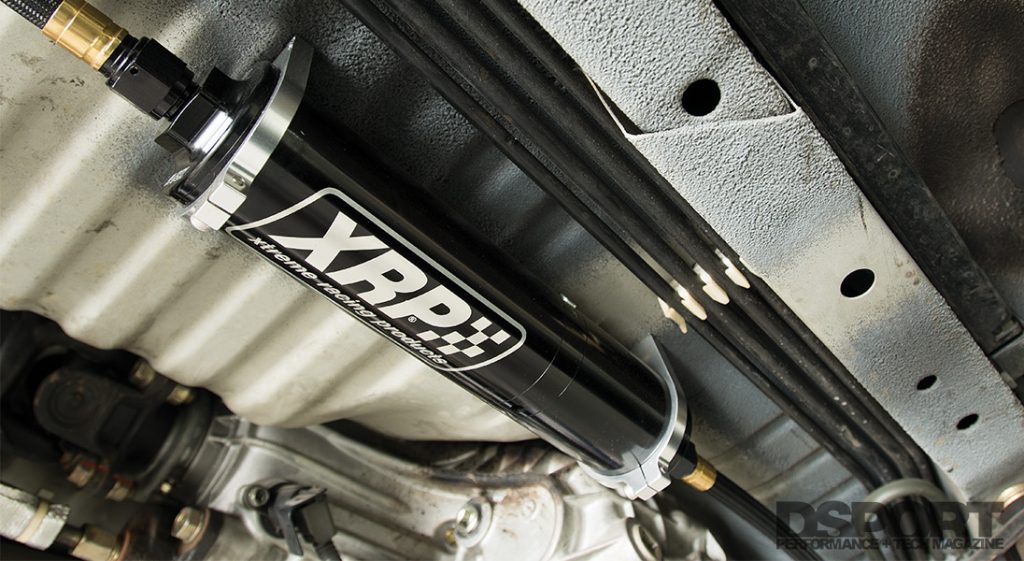 The car fell short of its original output, but considering the low boost setting, conservative tuning and years of sitting in storage, the results were in line with the expectations for its baseline testing. The next step will be to build on its current foundations, updating parts with the best of what the current aftermarket has to offer. Just as the R34 was revolutionary when it came out at the beginning of the new millennium, so too will the completed project. Be sure to follow the progress of Project Time Capsule as it transforms from its early 2000s roots into a modern performance icon. 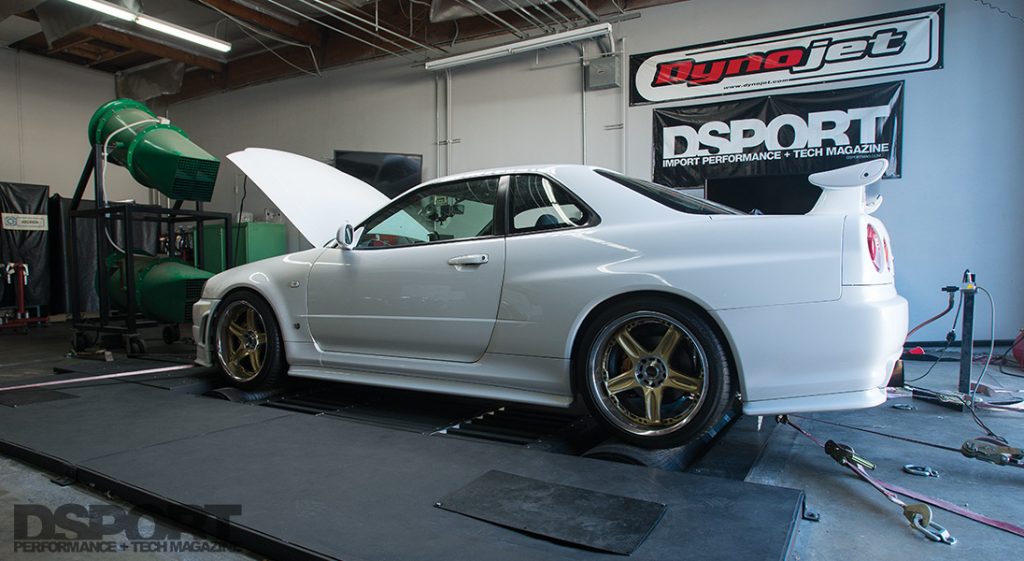