There is no doubt that the Mazda RX-7 is one of the best sports cars to come out of Japan. Mazda got it right with this car, from its appealing and curvaceous design to its lightweight and powerful twin-rotor and twin-turbo Wankel engine. But what really makes this car special is its potential when you begin to consider the possibilities that the aftermarket-tuning scene opens up. The car you see on these pages is the perfect example of how the FD3S can be transformed into something totally unique, but most importantly, exceedingly fast. Behold, the street-tuned Zimax RX-7.

We first set eyes on this car during the July 7th 2007 “7-7-7” RX-7 meet at the famed Daikoku parking area. Among the hundreds of highly-tuned RX-7s, it was this particular one that grabbed our attention. Sitting low on its racing suspension it looked the part with its blue and black contrasting bodywork. We had a chat with the owner who immediately agreed to meet us a few days later at one of our favorite shooting locations in the port side of Tokyo. 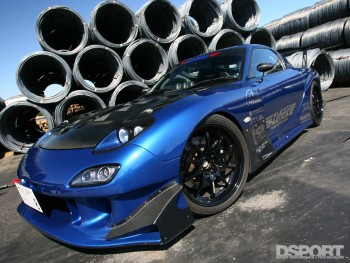 We discovered that the owner likes to dabble in odd illegal racing on one of the best-known stretches of highway in the world, the Wangan. He had his car built by Zimax and set up for the best possible high-speed performance and high downforce, which explains the rather complicated looking bodywork. The owner wanted to give the car a true racer feel and no one does this better than good old RE Amemiya. The famed RX-7 tuner has supplied the full AD GT kit, which consisted of the six parts needed to widen the bodywork. From the front, we have the racecar like front fenders, the deep side skirts and the rear overfenders, which are riveted to the body. With these bits on the car, the job was well on its way. It wasn’t until the front end was chosen that the car really began to take shape. On went an RE Amemiya 2005 model N1 front bumper which features a chunky integrated lower lip while offering infinite cooling potential thanks to all its large openings. Integrated into the bumper are the later generation sidelights and a tow-hook. RE Amemiya then focused on the headlights. The heavy pop-up stock items were sent to the trash bin and replaced with sleek and aggressive RE Amemiya clusters made up of twin HID IPF projectors. RE Amemiya’s vented carbon bonnet, helps to dissipate heat from the engine bay. Out back, the stock rear bumper has been joined by a host of parts. A carbon-fiber KSD light protector, RE Amemiya rear diffuser, side vortex generators and a hard-to-miss GT-style wing complement the view from the rear. The rear lights have been fitted with some very smart LED inserts which on top of being very bright offer the possibility of choosing different patterns from the stop cluster. Adding to the racing look are the contrasting black-carbon parts like the front bumper side canards, the front fender diffusers and the side mirrors. And as a final exterior touch, the Rays Engineering Volk Racing CE28N lightweight wheels have been sprayed in glossy black. 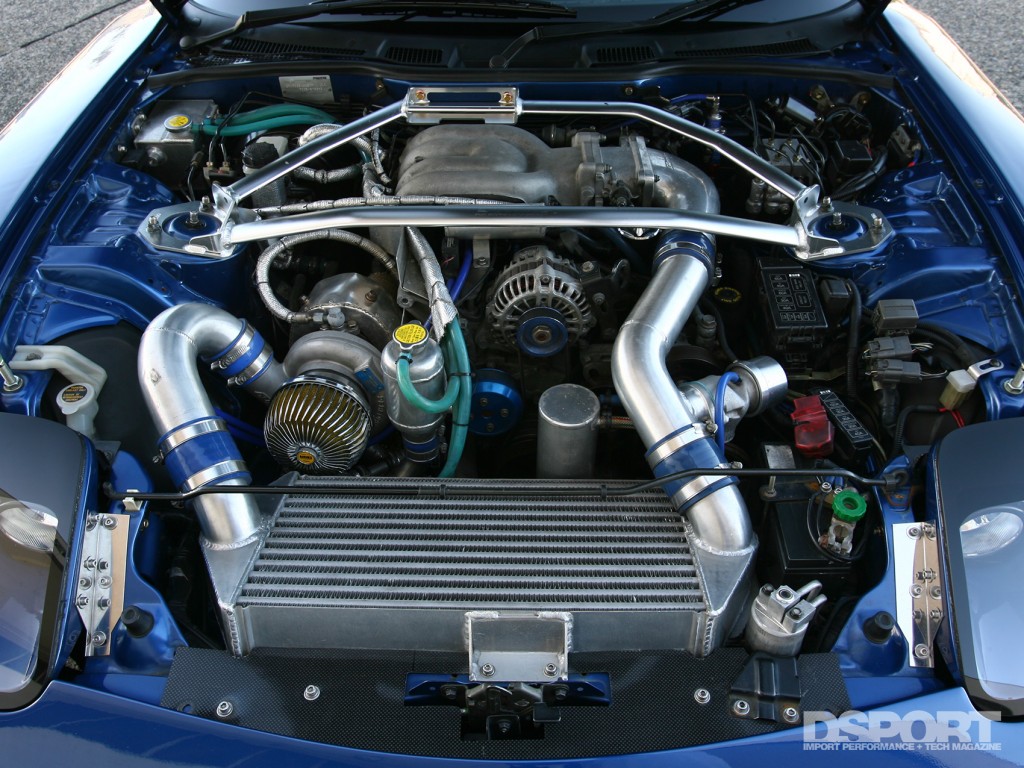 Once the feather-weight carbon bonnet is opened, a fully-rebuilt Zimax special 13B rotary engine is revealed. The single Trust TD06SH turbine, although not the biggest turbo to be used on a 13B, is a very good choice when shooting for good all-around power and drivability. To keep the under-bonnet temperatures in check, the turbine side of the TD06 has been covered with a custom heat shield. To prepare the engine for increased power levels, Zimax took the 13B apart and added a nice dose of side porting. The seals on the rotors were replaced with WPC items, which offer better performance and durability under heavy loads. Taking the compressed air charge from the compressor to the engine’s intake are custom-built intercooler pipes, which have been kept short, thanks to the horizontally mounted Zimax custom intercooler. Further helping response is the Trust throttle chamber.

Joining the intercooler in the v-mount set-up is the radiator, which has been mounted at a 45o angle to make best use of the airflow channeled in by the bumper and vented out by the bonnet. On each side of these are the oil coolers, which are cooled by the air from each of the side intakes. An air-separator system with a sub-tank has been added for good measure. Rotaries are well-known for generating a lot of heat, but with these upgrades in place the owner can rest assured that he can safely push the 13B hard any time. A set of 850cc/min injectors are fed by twin Nismo fuel pumps while the ignition is improved with a set of NGK racing plugs, a Revolution ignition system and a Feed Grounding kit. Engine management is taken care of by an A’PEXi PowerFC stand-alone unit which is easily monitored thanks to the A’PEXi Commander unit mounted in the interior.