To the hardcore skyline fan, Nissan’s R34 GT-R was the last true skyline. Since the new R35 abandons the Skyline namesake, there is an air of truth to that statement, even though the GT-R badge carries over to Nissan’s current flagship sports car. But after 13 years of dominating the Japanese racing circuits, its hard to argue with Skyline purists. Giovanni, who is an Australian living in Japan, considers himself to be among the top echelon of Skyline purists.

Giovanni wanted to build a durable track machine to race on the weekends and terrorize the streets of Japan on his daily commute. This journey began when he selected this base model R34 GT-R. Wasting no time contemplating the path of the build, Giovanni took his new Skyline straight to the president of Top Secret Japan, Kazuhiko “Smokey” Nagata. Smokey’s reputation for producing outrageous builds made the decision to work with Top Secret a no brainer. 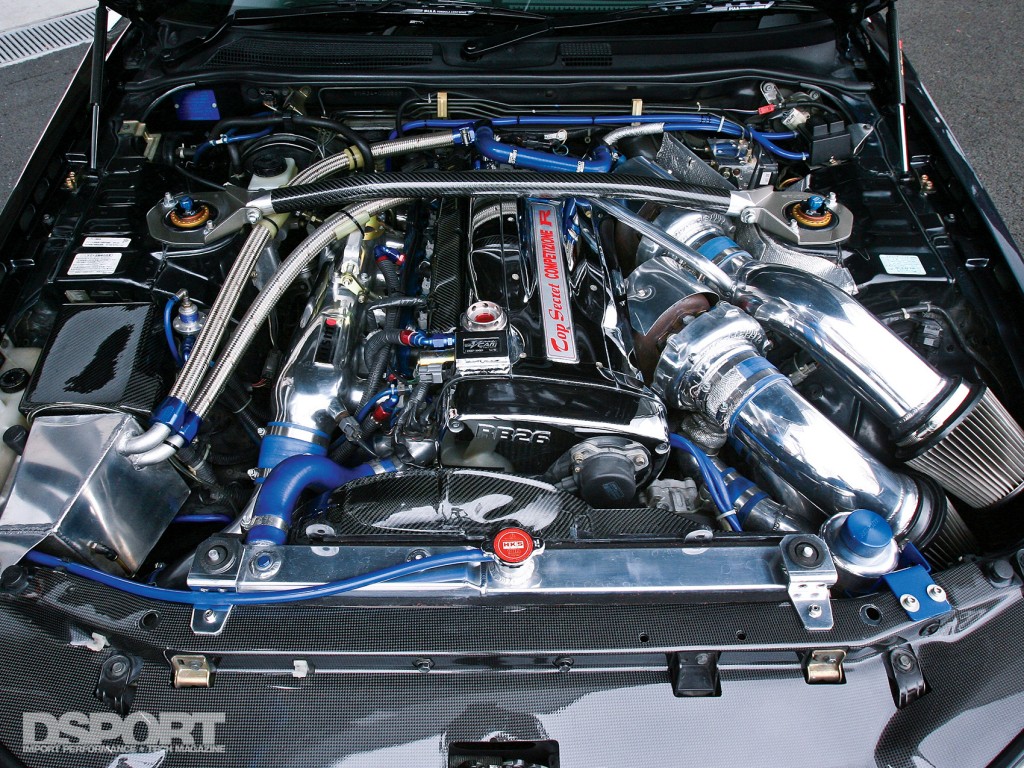 The build began at the heart of the Skyline, the RB26DETT powerplant. The straight six-cylinder engine was pulled, disassembled and prepared for an entirely new rotating assembly. Top Secret ported the oil and water galleys to permit increased flow through the block. The cylinders were then overbored and honed to 87mm before being filled with HKS forged-aluminum pistons. HKS billet-connecting rods link the pistons to the HKS billet stroker crankshaft. NISMO N1 bearings and seals complete the rotating assembly. The HKS step 3 stroker kit increased the displacement of the RB26 to a total of 2,771cc. With the shortblock complete, attention shifted to the cylinder head. Top Secret hand ported and polished the cylinder head before installing TOMEI POWERED valvetrain components, including valve seats, dual valve springs and titanium retainers. The freshly prepared head was then bolted to the block with TOMEI POWERED head bolts while an HKS 1.2mm head gasket ensured a proper seal between the block and head. To actuate the valvetrain, a special set of components were selected. A limited-edition HKS Valcon V-Cam Pro and a pair of HKS 272-degree camshafts were selected to articulate the valvetrain. This particular Valcon V-Cam unit is numbered 16 of 30, making it an exceptionally rare unit indeed. The Valcon V-Cam Pro adds variable cam timing to the intake side for improved engine efficiency and greater overall power output. To ease the tuning process and to extract maximum power from the stroked RB engine, Top Secret Adjustable Cam Gears mate to the HKS bumpsticks while a Top Secret Super Timing Belt keeps the cams spinning in time with the crankshaft. 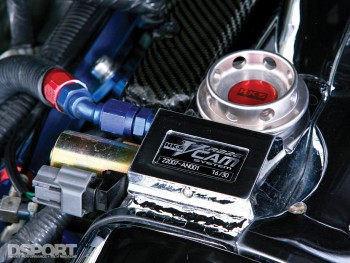 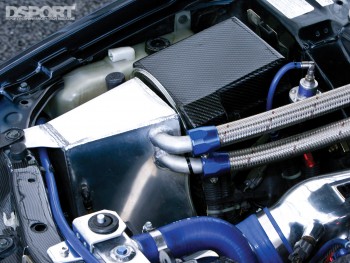 Top Secret fabricated an oil catch tank that fits neatly in front of the fuse box in place of the washer tank. 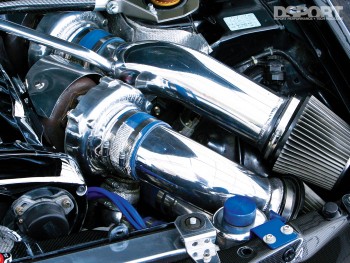 Now featuring additional strength, stroke and displacement, the 2.8-liter RB engine can generate the exhaust gas velocity needed to quickly spool properly sized turbochargers. HKS stainless-steel top-mount manifolds position a pair of HKS GT2835R turbochargers prominently alongside the RB26 in the engine bay. From the exhaust ports of the turbochargers, Top Secret 80mm downpipes channel spent gases into the 90mm GReddy Ti-R exhaust and out to the atmosphere. From the other side of the cartridge, ambient air gets filtered through HKS Metal Flow filters before being forced through intercooler hard pipe on the way to the ARC twin-entry front-mount intercooler. After rejecting heat at the intercooler, the cooled, denser air flows out of the end tank and into hard piping on the way to the intake plenum. The plenum, a NISMO GT surge tank, distributes the pressurized air between the NAPREC custom 49mm individual throttle bodies.