Too much power? Say it ain’t so. Saad Saad’s 1994 Toyota Supra turbo held the world-record for the most-powerful, 6-speed Supra in 2004. While this vehicle was able to lay down 9.80s at 150mph with 950 horsepower at the wheels and no nitrous-oxide assistance, getting its new-found 1230 wheel horsepower to the ground is the newest hurdle in the evolution of this street and strip JZA80. Unlike the majority of Supras making over 1000 wheel horsepower, this Supra remains streetable. For the street, it’s business as usual rolling on 16-inch Mickey Thompson ET Streets. At the strip, Goodyears are bolted in place while door bars are bolted in along with the parachute.

What is the ultimate street car? Everyone has a different opinion, but few people would be able to point to another car that could compare to this Supra. It’s been built to deliver the power and the performance while not cutting corners in the execution department. The underhood is as clean as the best show cars and the attention to detail is obvious throughout the build.

However, one must realize that this is a project far from completion. This Supra, as it sits, represents a snap shot on the road of performance evolution. When we met Saad at an IDRC event held at Firebird Raceway a few years ago, he was piloting a stock appearing, stock-block Supra that was laying down 10-second passes at will. Today, Saad’s latest Supra has undergone 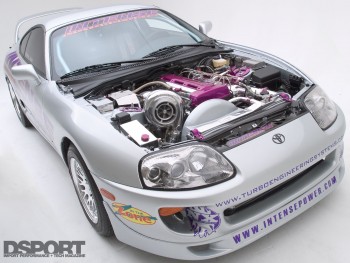 On paper, the “8s” shouldn’t be a problem. Motivating 3800 pounds (the weight of the car and the driver in full suit) with 1230 wheel horsepower means that 8.50s would be the result IF the gearing was optimized and IF the drivetrain and engine could hold together. If you didn’t catch it, that was two big IFs. 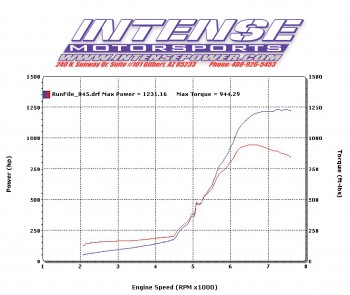 Saad had hoped to be the first six-speed Supra into the 8s before this issue went to press. Following the photo shoot, Saad made the trek out to The Strip in Las Vegas for his record setting attempt. Unfortunately, the record would not be realized before this issue went to press. Applying 1230 horsepower to the ground is no easy task. It is a challenge, getting the rest of the car comfortable with 1230 wheel horsepower. Considering that Saad’s Supra is producing over four times the factory wheel horsepower, it is no wonder that new obstacles are going to be encountered. 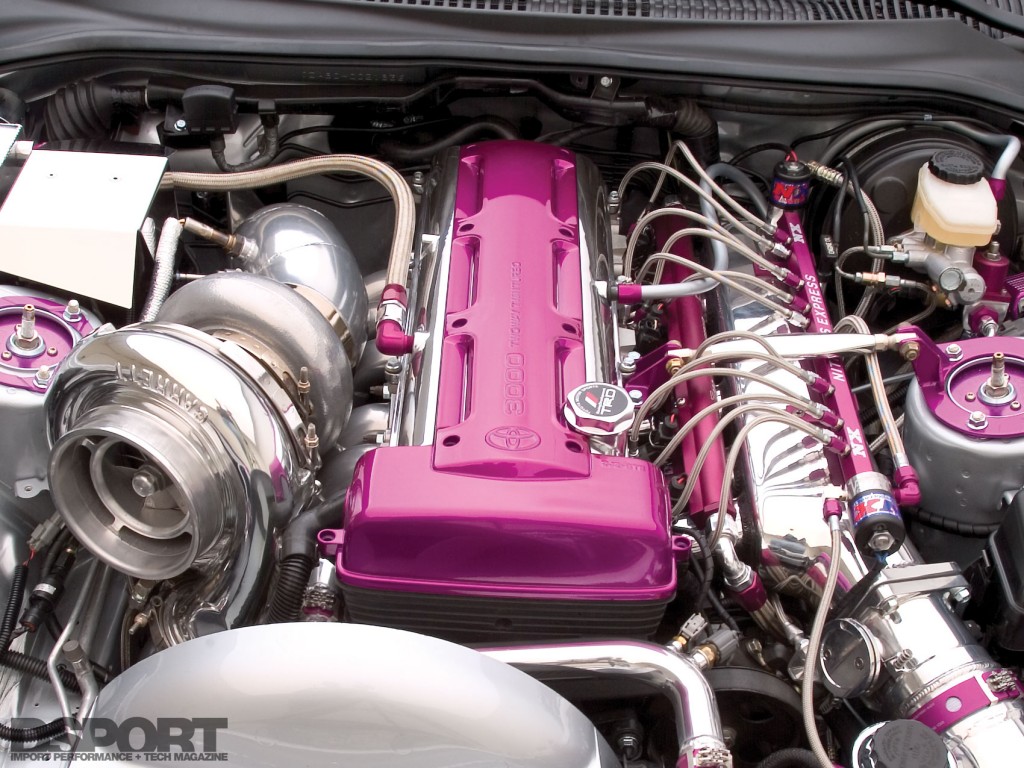 Custom 8.5-to-1 JE Pistons have been engineered with superior material, thicker domes and relocated ring positions to survive the abuse of 200 horsepower per cylinder. These pistons attach to the factory crankshaft via high-strength Crower 4340 steel connecting rods. The entire rotating assembly finds its home in the stock block.

On the top end, the Toyota 2JZ cylinder head received a port job from Turbo Engineering Systems (Saad’s company started to satisfy the needs of horsepower nuts like him). The cylinder head was then fitted with 1mm-oversized SuperTech valves. The SuperTech intake valves were machined from stainless steel while the exhaust valves were cut from Inconel. Inconel, a high-temperature nickel-alloy, is well suited for maximum performance turbocharged applications with extreme exhaust gas temperatures. A pair of HKS “272” camshafts orchestrate the intake and exhaust valve events.