You are at:Home»The Cars»Features»World’s Most Powerful 6-Speed Supra Rules the Streets 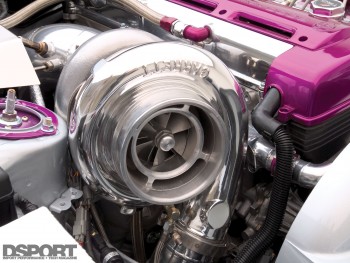 How do you get four times the output out of a turbocharged engine? The answer is simple, a turbocharger capable of four times the airflow as the factory unit. To this end, a big-frame Garrett “T6” GT47-family turbine wheel was teamed with a T-too-big 88mm (inducer) compressor wheel. According to Kent Kim of Intense Motorsports, “That’s the biggest turbo you can fit in a Supra that isn’t front-halved.” Seeing the minute amount of clearance between the shock tower and turbo, we believe him. The massive Turbo Engineering Systems (TES)“T6” turbo makes its home on top of a TES two inch-primary stepped header. The TES turbo header directs exhaust gases from the cylinder head into the GT47 turbine housing. A TiAL 46mm high-pressure wastegate works with the AEM EMS to control boost pressure. On the cool side of the turbo, the T6 turbo discharges into custom intercooler plumbing that feeds the massive TES 6-row MegaCooler front mount. The intercooler then sends the charge air through a four-inch pipe to the virtual works intake manifold. 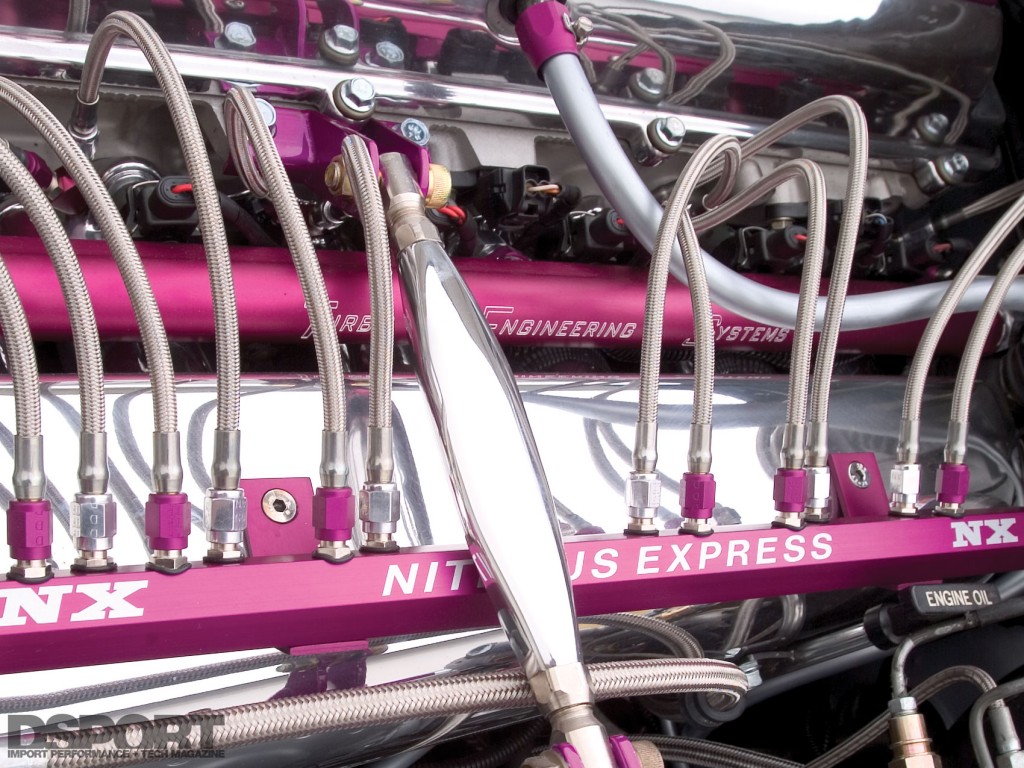 A Gaggle of Giggle

The best incentive for getting a big turbocharger motivated is laughing gas. More specifically, a nitrous-oxide injection system that flows both nitrous-oxide and additional fuel into the engine for an instantaneous power increase. An inline six cylinder engine can provide a bit of a challenge for even distribution of nitrous oxide and fuel due to its extended length. This Nitrous Express Next Generation rail-system uses a half-dozen shark nozzles that direct their flow directly into each cylinder. This wet system ensures that each cylinder receives an equal and fully-atomized dose of the nitrous-oxide and gasoline mixture. When the nitrous and gasoline mixture is ignited in the cylinder, a surplus of high-energy exhaust products are ready, willing and able to provide the energy needed to get the big turbo into full-boost operation.

A number of the high-horsepower Supras that have dipped into the 9s and low 10s on the factory six-speed have relied on the RPS Carbon-Carbon clutch. For those Supra owners, they all owe Saad a big “thanks.” Saad owned the original Supra that helped Rob Smith engineer and re-engineer the RPS Carbon-Carbon clutch for this application. According to Rob, “We started on the drawing board and sent Saad our first prototype. This early version was made with a number of lightweight components. Saad quickly found the weak links that we never imagined were present. We were challenged to build a better clutch and we did. Saad was challenged to make more power and he did. Lightweight components eventually vanished and we ended up choosing materials and designs that were bulletproof. The current Carbon-Carbon we offer to all of the Supra turbo owners is that same one proven to be bulletproof at up to 1230 wheel horsepower.”

Once power makes its way through the clutch, the Getrag 6-speed uses its factory internals to spin a TES high torque driveshaft. The driveshaft then powers the TRD limited-slip-differential in the factory rearend. Power reaches the wheels through factory Toyota axles. 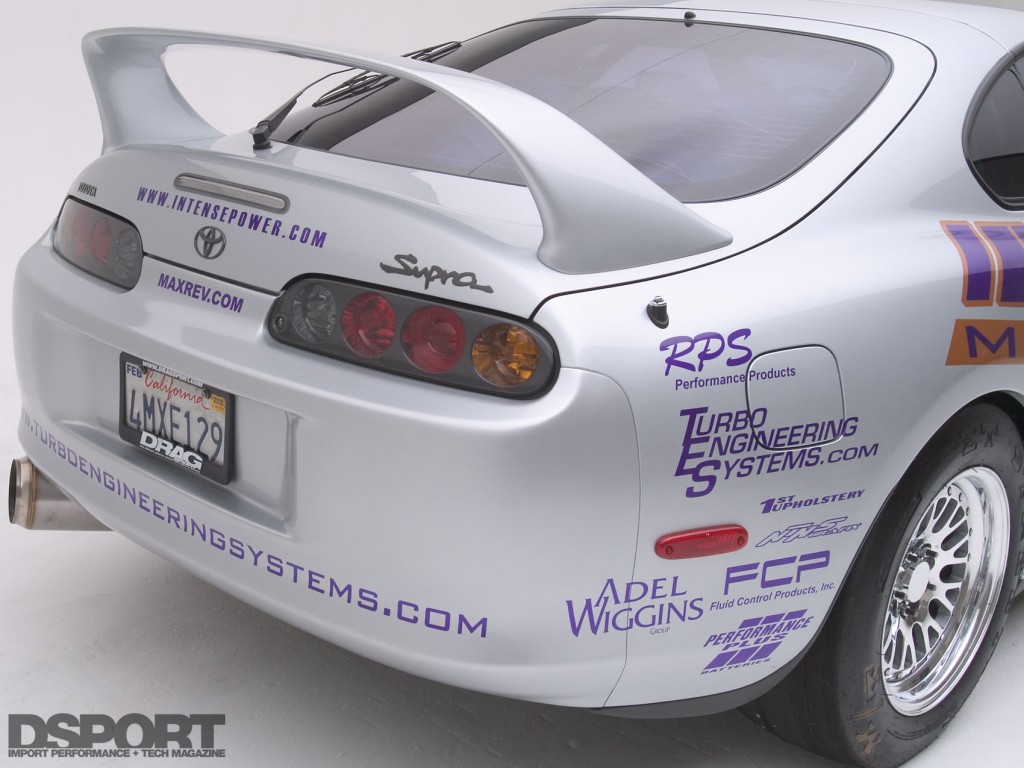 Daunted with the uneasy task of putting the power to the ground are a set of CCW forged-aluminum wheels carrying Mickey Thompson 26×10.5×16 ET Street tires on the street. At the track, traction becomes further improved with a swap to 28×10.5×15 Goodyear slicks. 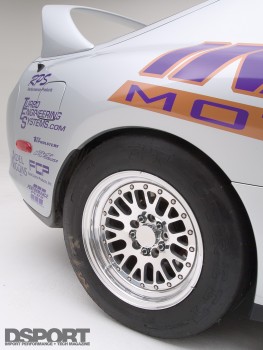 Every performance enthusiast would want to drive a car with full-race performance on the street every day. Full-race cars, however, were made for the racetrack and not the street. Most race cars are lightweight shells of the original car. All systems that don’t have to do with performance are generally eliminated. Race cars don’t have stereo systems, air conditioning, exhaust systems, roll-up windows or power door locks. Instead, race cars are made to generate ungodly amounts of power in a chassis that is as lightweight as possible. If the type of racing requires, the suspension will also be optimized to allow the car to handle while the braking system will deliver incredible stopping power.

While the performance of this Supra rivals many purpose-built racecars, Saad’s is able to enjoy a degree of  “streetability” that is extremely rare for a 9-second car on the prowl for an 8-second timeslip. This Toyota enjoys its caliber of performance while still maintaining its street character. It’s safe to say that we don’t know anyone that wouldn’t make room for this Supra in their garage. Too much power? We’d be happy to deal with that.