Honda unveiled the sedan trim of its 10th iteration of the beloved Civic, and it’s not a simple rehashed update. The car manufacturer announced that this generation is the first to include a sedan, coupe, high-performance Si model, a 5-door hatchback and the first ever Type-R for the US. Two new engines will be available, and we still await performance figures. However, Honda claims the new 2.0-liter, 16-valve, DOHC i-VTEC 4-cylinder in the Sedan LX and EX trims is the most powerful base engine ever offered on a Civic. A smaller 1.5-liter, direct-injected, turbocharged, 16-valve DOHC 4-cylinder will fit into the EX-T, EX-L and Touring trims, and Honda claims it to be the most powerful engine offered on a non-Si Civic in the US. The model redesign introduces a much sportier look than previous models, plus an overall cleaner interior aesthetic than before. With a 25-percent improvement to chassis torsional rigidity, 68lbs reduction in weight and new multi-link rear suspension, the new Civic is expected to make turns all the more satisfying. A cleaned up inside, a sportier outside and more power, what more could you ask for? Will this be the Honda Civic’s biggest reintroduction?

Two new powertrains, including first Honda turbo engine in U.S.
Available Honda Sensing™ technologies
Compatible with Apple CarPlay®, the smarter, simpler way to use your iPhone in the car
Also supports Android Auto™
New styling includes significant use of LED lighting
New platform and package yields largest cabin in compact class
Honda took to YouTube today to unveil an all-new, dynamically styled 10th-generation 2016 Civic Sedan, slated for sale in the U.S. this fall. With a more athletic stance and sportier driving position, the 2016 Civic Sedan is a new-from-the-ground-up design intended to recapture the sporty character of Civic while creating the world’s best compact car – setting a new benchmark in the mainstream compact class for fun-to-drive performance, safety performance and fuel efficiency, together with a new level of refinement. 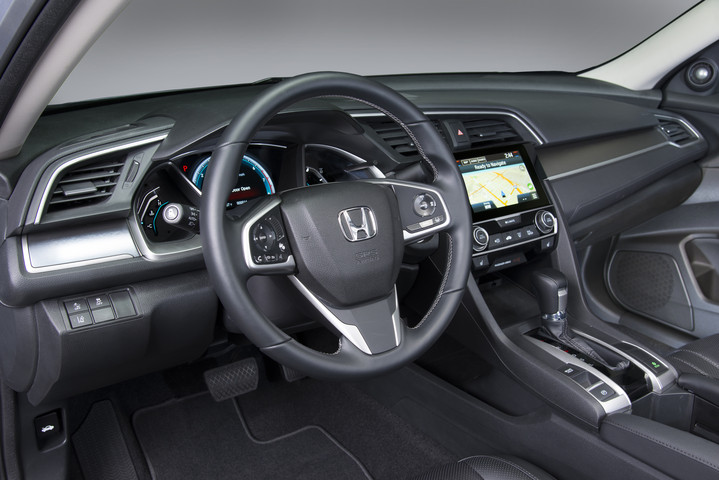 The Civic Sedan is the first in a series of new 10th-generation Civic models that will include a sedan, coupe, high-performance Si models, a 5-door hatchback and the first-ever Civic Type-R model for the U.S. market, comprising the most diverse and innovative lineup in Civic’s 43-year history.

“This tenth-generation Civic is quite simply the most ambitious remake of Civic we’ve ever done,” said John Mendel, executive vice president of American Honda Motor Co, Inc. “We are bringing more new technology and innovative thinking to Civic than ever before to establish a new benchmark for fun-to-drive performance, fuel efficiency, safety performance and refinement in the compact class.”

Backing up the new Civic’s dramatic and sporty design with new power and efficiency, for the first time the 2016 Civic will feature two all-new engines – including the first-ever application of Honda turbo engine technology in the U.S. These powerful and fuel-efficient new engines combine with a sophisticated new body and chassis design to deliver incredibly responsive and sporty performance with a higher level of ride refinement and class-leading fuel efficiency.

The 2016 Civic Sedan will be available with the Honda Sensing™ suite of advanced safety and driver-assistive technologies, including Collision Mitigation Braking, Road Departure Mitigation and, for the first time in a Honda, Adaptive Cruise Control with Low-Speed Follow – bringing new value to the compact segment. 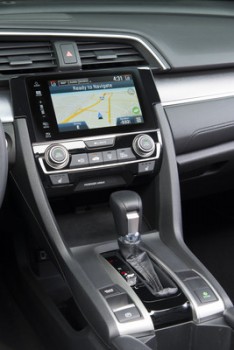 Apple CarPlay® takes the things you want to do with your iPhone while driving and puts them right on your car’s built-in display. You can get directions, make calls, send and receive messages, and listen to music right from the touchscreen or by voice via Siri. Supported apps include Phone, Messages, Maps, Music and compatible third party apps. Apple CarPlay® is compatible with iOS 8.4 or later and iPhone 5 or later.

Android Auto™ was designed to give drivers a simple, intuitive way through touch and voice to minimize the potential for distraction so the driver can stay focused on the road. Compatible with Android 5.0 and higher, Android Auto features Google Maps, Google Now, messaging, music and numerous popular apps.

The dramatic and sporty new Civic design is grounded in its more athletic stance and low and wide proportions. Compared to the current model, the 2016 Civic Sedan is nearly 2 inches wider and 1 inch lower with a 1.2-inch longer wheelbase, featuring a more compact and sporty front overhang, a longer, more aggressively sculpted hood and fastback-style tail.

“The new Civic really is the embodiment of our global design team’s goal of styling a dramatic form that follows and speaks to the dynamic function of this ambitious redesign,” said Jarad Hall, Senior Exterior Designer and project leader of the Civic Sedan, Honda R&D Americas. “The low and wide proportions, with the wheels pushed to the outmost corners, emphasize the Civic’s dynamic handling prowess and give the car a crouched and muscular look, like a tiger ready to pounce.” 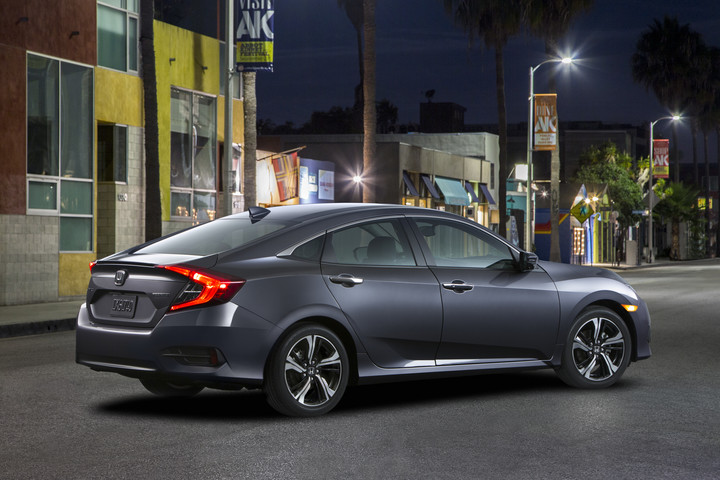 The 2016 Civic Sedan will feature two all-new, more powerful and fuel-efficient engines. Civic Sedan LX and EX trims will be powered by a 2.0-liter, 16-valve, DOHC i-VTEC™ 4-cylinder – the most powerful base engine ever offered on Civic – mated to either a 6-speed manual (LX trim) or continuously variable automatic transmission (CVT). Civic Sedans in EX-T, EX-L trims and Touring trims will be powered by a 1.5-liter, direct-injected and turbocharged 16-valve DOHC inline-4, mated to a unique CVT, delivering a new level of responsiveness in this capacity class of turbocharged engine.

The new 1.5-liter powerplant is the first turbocharged engine on a U.S. Honda model and the most powerful engine ever offered on a non-Si Civic in America. Both engines will offer top-in-class performance and fuel efficiency, and are targeted to receive EPA highway fuel economy ratings in excess of 40 mpg. Additional powertrain details and specifications will be announced closer to launch.

The 2016 Civic will set a new standard for dynamic handling, steering, ride quality and cabin quietness in the compact class, courtesy of its all new platform, featuring the most rigid and tightly sealed body and the most sophisticated chassis in Civic history.

Advancing the sporty character of this all-new Civic is its more sporty driving position, with a one-inch lower hip point compared to the current car. The lower hip point is enabled by the new Civic’s lower floor and engine and its all-new suspension design. The new Civic chassis features a redesigned strut front suspension and a new multi-link rear suspension mounted to an ultra-rigid rear subframe.

Torsional rigidity of the new body is improved by 25 percent, aided in part by more intensive use of ultra-high-strength steel. Twelve percent of the unit body is made of ultra-high-strength steel, up from 1percent on the current model. Aerodynamic efficiency is improved by 12 percent to class-leading levels, in part through the use of full underbody covers—a Civic first. Despite its larger size, the new Civic unit body is 68 pounds lighter than before, while new body-sealing techniques result in a 58-percent reduction in cabin air leaks. Class-leading cabin quietness is further improved by the use of premium noise-reducing features, including a flush-mounted acoustic glass windshield, a more tightly sealed engine compartment and triple-sealed doors.

The new Civic interior is designed to offer the most comfortable, sophisticated and premium-feeling cabin in the compact class. An additional 3.7 cubic feet of interior space translates into the largest cabin in the compact segment with 2 inches of added rear-seat legroom versus the outgoing model. In front, new ultra-thin front roof pillars enable class-leading forward visibility; and at the rear, trunk space has been increased by 2.6 cubic feet with a lower liftover height, larger opening and wider and taller cargo area. Civic Sedan EX and above trims will feature a 60/40 split and folding rear seat. 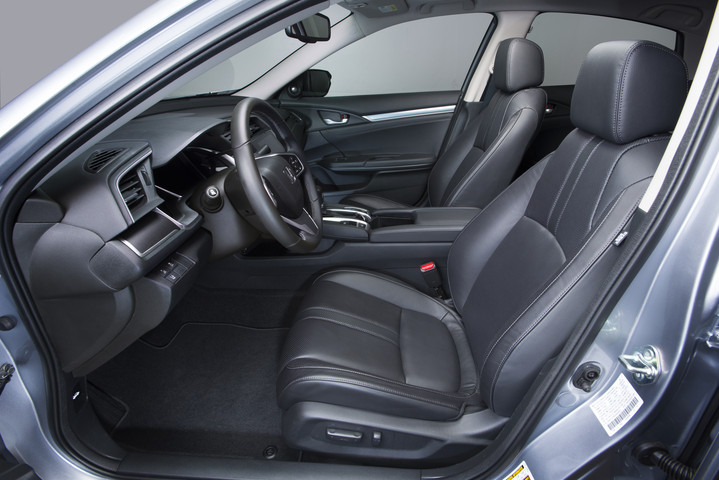 Civic Sedans for the North American market will be produced at the company’s Greensburg, Indiana and Alliston, Ontario, Canada auto plants. The new Civic’s 2.0-liter and 1.5-liter turbo engines will be manufactured in Anna, Ohio, and the vehicle’s two automatic transmissions (CVTs) will be sourced from Honda plants in Russells Point, Ohio, and Celaya, Mexico.

Civic is Honda’s best-selling car globally, the best-selling compact car in America with individual retail car buyers for the past eight years1 and the most popular car with U.S. millennials2. The first-generation Civic debuted in America in 1972, and Civic has played a leading role in advancing fuel efficiency, small-car safety performance, design, technology and fun-to-drive performance for nine generations. American car buyers have purchased more than 10 million Civics throughout its 43 years in the U.S. market, and Civic has been manufactured in North America since 1986, with cumulative production in North America exceeding nine million Civics.

Honda offers a complete lineup of Honda cars, trucks and service through a network of more than 1,000 Honda dealerships within the United States. Eight Honda auto plants in North America, including four in the U.S., have the capacity to produce 1.92 million automobiles each year. In 2014, more than 97 percent of the Honda and Acura automobiles sold in the U.S. were produced in North America3.

2. Based on IHS Automotive, Polk new U.S. retail vehicle registration and age of head of household data for 2015CYTD June