The transition from horse-drawn carriages to thousand-horsepower streetcars didn’t take place overnight. Any product of technology and engineering undergoes modifications, updates and a lot of trial and error before the release of the next iteration. Auto manufacturers undergo the same process with every vehicle in their stable, finding ways to improve offerings in the future.

From Streetcar to Racecar 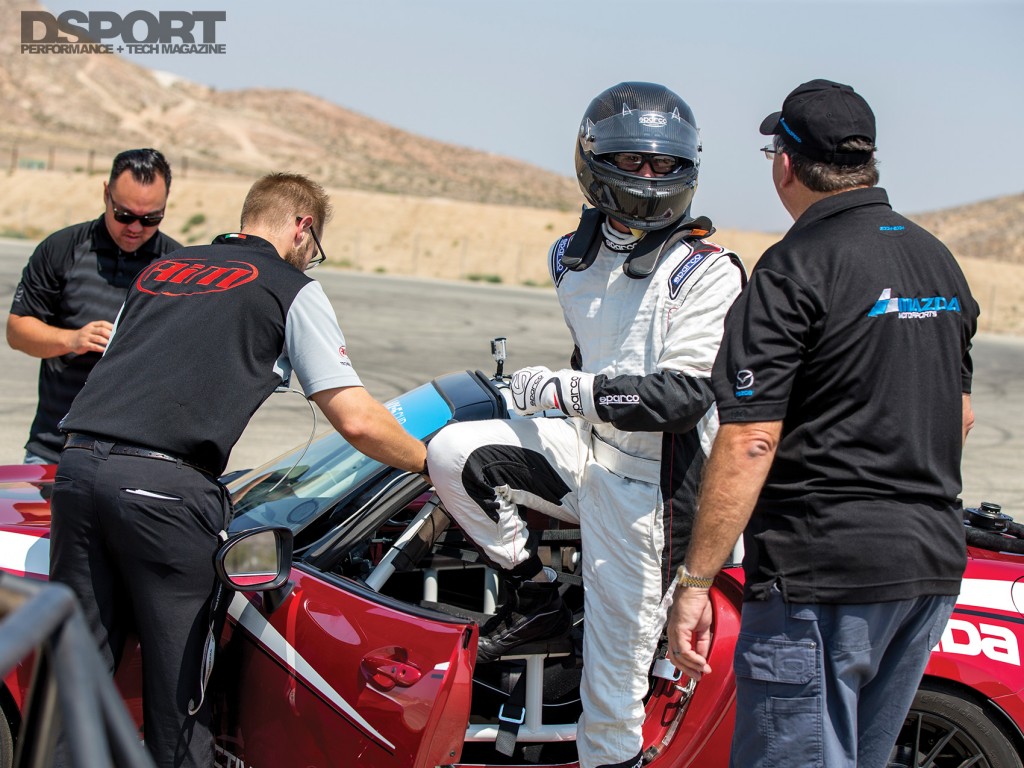 Back-to-back comparisons of four different platforms offered a unique perspective of the progression of the Miata lineage.

Evaluation of the Mazda Miata racecars took place on the Streets of Willow course at Willow Springs International Raceway. This specific course places emphasis on tight, technical corners that challenge any car’s handling capabilities. Each MX-5 racecar carried itself around the track with surprisingly different characteristics in feel and driving style.

The NA Generation Miata connects driver and track with minimal investment, as such it has become a staple in entry-level racing worldwide.

Following the NA Generation, the NB offered a fresh platform for the Spec Miata series. The street model for this generation rolled off the assembly line from 1998 to 2005 and benefited from a more powerful engine, a more rigid chassis and better stopping power. When cranking the wheel into the various tight turns of the track, the car experienced minimal body roll. However, the extra weight compared to the NA model made initial turn-in feel a little delayed. Despite this, the braking capabilities stood out above all else, as stopping distance proved shorter. No matter how late you get on the brakes, chances are there’s still room left to brake even later. Never play a game of chicken against an NB MX-5. 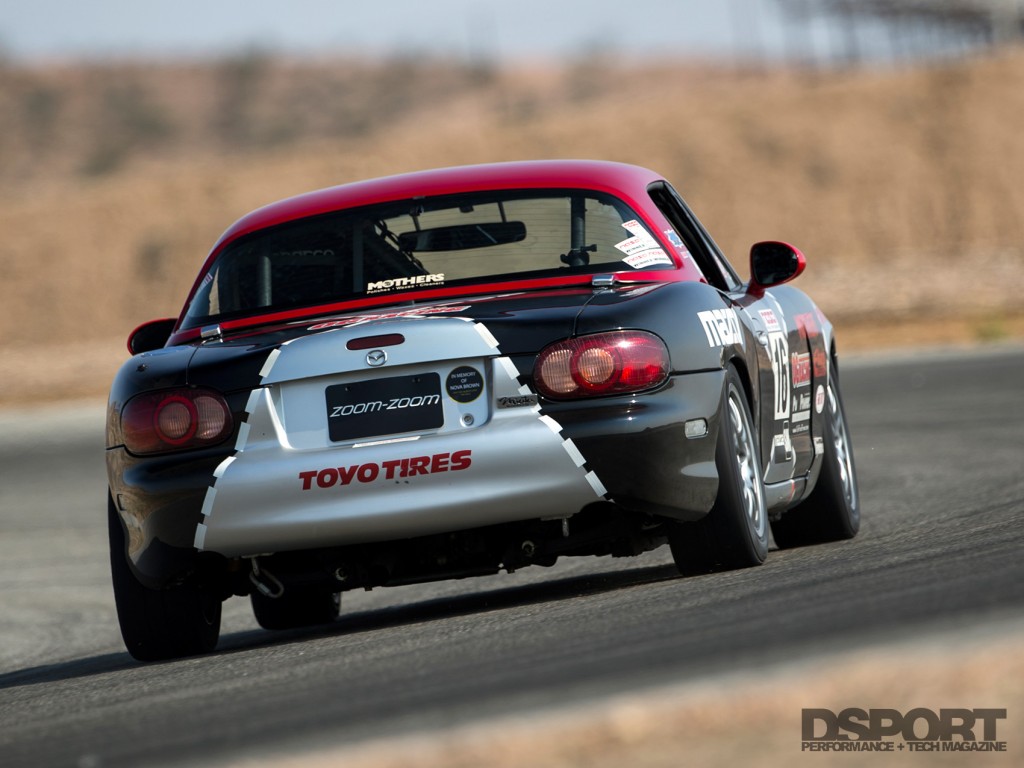 Nearly two decades in production across four generations, the MX-5 holds strongly to the concept of a lightweight, nimble roadster to deliver a fun and satisfying driving experience at a modest price.

The NC generation, produced from 2005 to 2015, brought a big leap in power production and driving technology from the previous model. A beefier 2.0-liter engine complemented the car’s performance greatly, especially due to the fact that this model gained only minimal weight compared to the previous generation. This version of Mazda’s little roadster introduced power steering and minimal driving aids that, while easily noticeable, do not impede on what the driver asks of the car. Given the tech updates and more powerful engine, this model felt surprisingly similar to the NB, with just a little more satisfaction when stepping on the gas pedal. 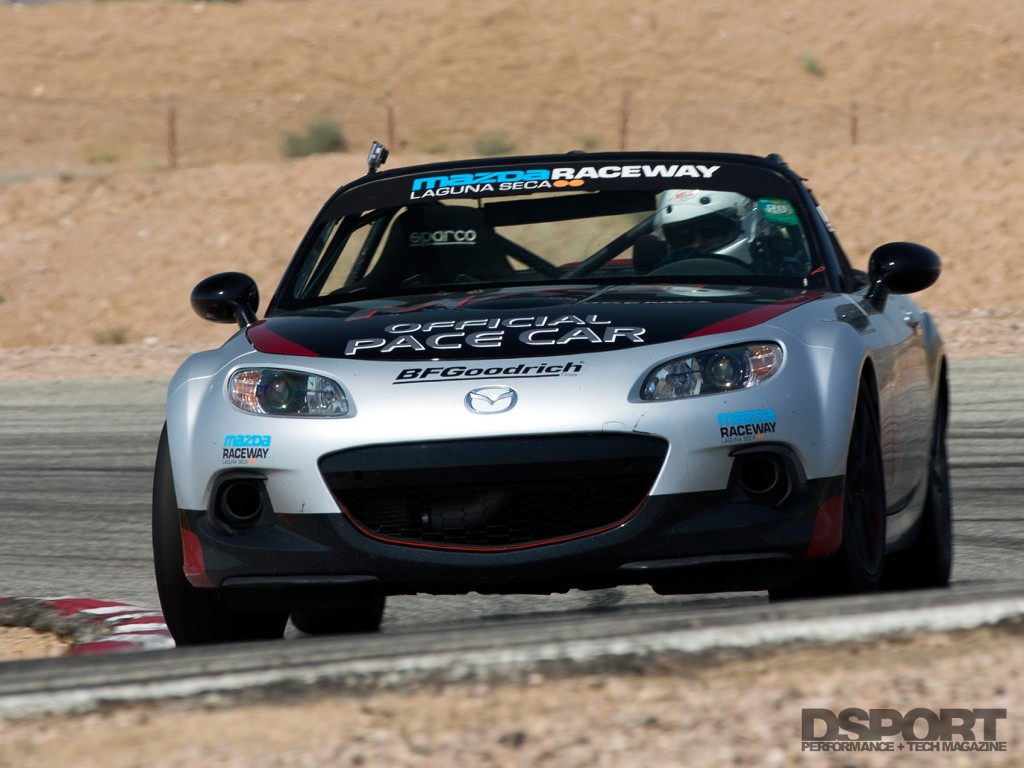 Each generation MX-5 Miata holds a strong reputation for its front/rear balance and neutral oversteer handling, and the new ND is no different. Small changes add up for better handling, like a more compact differential with smaller gears to reduce weight and rotating mass, a raised roll center to allow for faster turn-in, and even finer details like the move to four-lug wheels for further weight reduction. [pullquote] THE TIGHTLY-GEARED SIX-SPEED MANUAL, PAIRED WITH THE CAR’S LOW WEIGHT AND FANTASTIC POWER BAND MADE FOR A HUGE JUMP IN ACCELERATION.[/pullquote]Requiring minimal input from the driver’s seat, the ND MX-5 Cup blasts through corners as if it were on autopilot. The anti-lock braking system carries some enhancements that allow drivers to apply very hard, confident threshold braking. When persuading the car’s rotation with just a touch of trail-braking, the ND rewards you with a fantastic rotation that drifts the back end around for as long as you need it to. Not to be mistaken for snap oversteer, the rear end slides in a very gradual and, best of all, predictable manner. 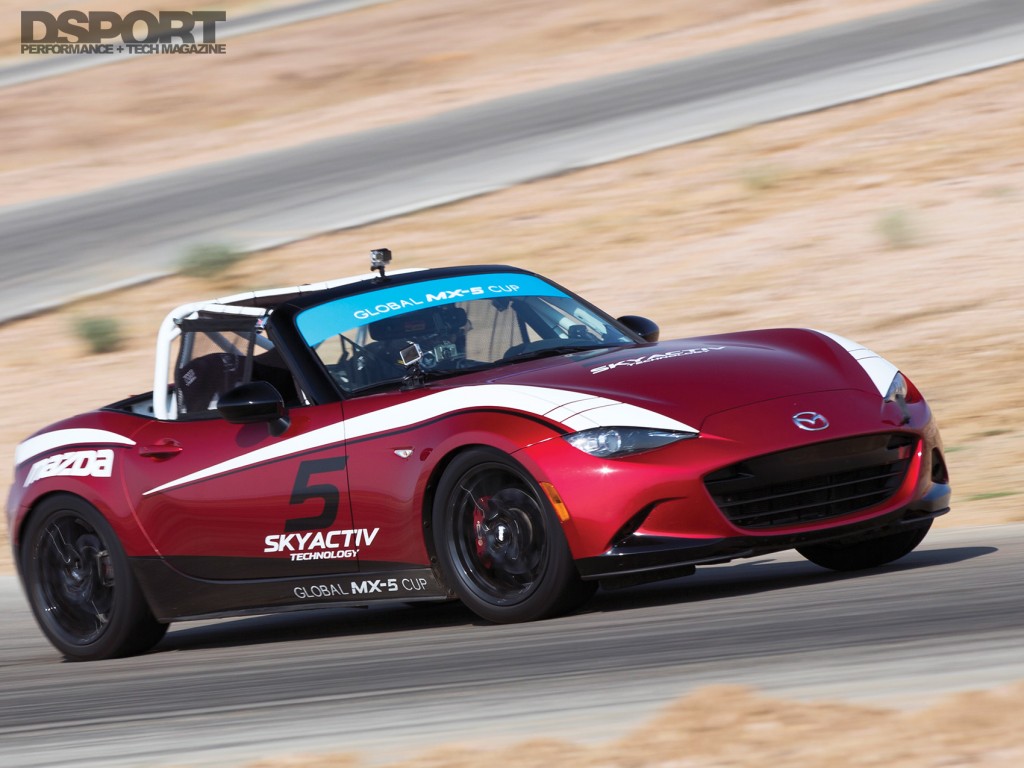 Some have voiced concern regarding the ND MX-5’s relatively low power numbers. While the car brings a fun experience to the track, the question of why the power output is lower than the NC remains. That’s not to say the car can’t accelerate. The tightly-geared six-speed manual, paired with the car’s low weight and a fantastic power band made for a huge jump in acceleration. But given Mazda’s achievements with its SKYACTIV technology in the racing world, it’s difficult not to ask why this 2.0-liter doesn’t produce more than 155hp and 148 lb-ft of torque.

Fun on a Dime

In defense of the car’s generally modest power output, MX-5 racing series drivers everywhere pride themselves on momentum driving and the closest wheel- to-wheel racing that many drivers ever experience in a lifetime. Beyond the relatively approachable budgets and running costs, the existing popularity of each generation MX-5 in club racing and pro racing alike ensures no shortage of regions to race with or competitors to pit against in the future. Stay posted this coming year, as Mazda introduces the ND generation to the Global MX-5 Cup series, where multiple series run around the world and will end the season at the historic Mazda Raceway Laguna Seca.