Adding power isn’t always the best method to go faster. Take a look at the various divisions of motorsport, for example. How do 200-to-300 hp club racer formula cars outperform 725hp NASCAR cars around the same track? Or how do 90hp, 250cc go karts turn quicker lap times around Mazda Raceway Laguna Seca than the 727hp McLaren P1? What the formula cars and go karts lack in power, they make up for in low weight and handling. Stage three of the D’Garage Ford Fiesta ST project called for the same approach. The Fiesta ST underwent power upgrades in both of its first two stages, so the next areas of focus lay in weight reduction, braking, and sticking the car to the ground.

Our previous trip to Buttonwillow Raceway revealed some new driving and performance characteristics in the second stage Fiesta ST that caught us by surprise. The mountune Sport CAT Down Pipe, High Flow Cat Back Exhaust System and Intercooler Upgrade with a tune brought a rise in horsepower and a massive jump in torque from 254 lb-ft to 296 lb-ft. The Fiesta ST’s acceleration out of corners improved, but at the expense of wheel spin with too much throttle. As for handling, Eibach’s Pro-Kit Performance Springs and rear Anti-Roll Single Sway Bar Kit dialed back the car’s performance on turn-in rotation, but picked up the overall grip level in all of the high-speed corners. Ultimately, the car circled around the track quicker than its first stage setup by little more than seven- tenths of a second, a final lap time of 2’11.716”. 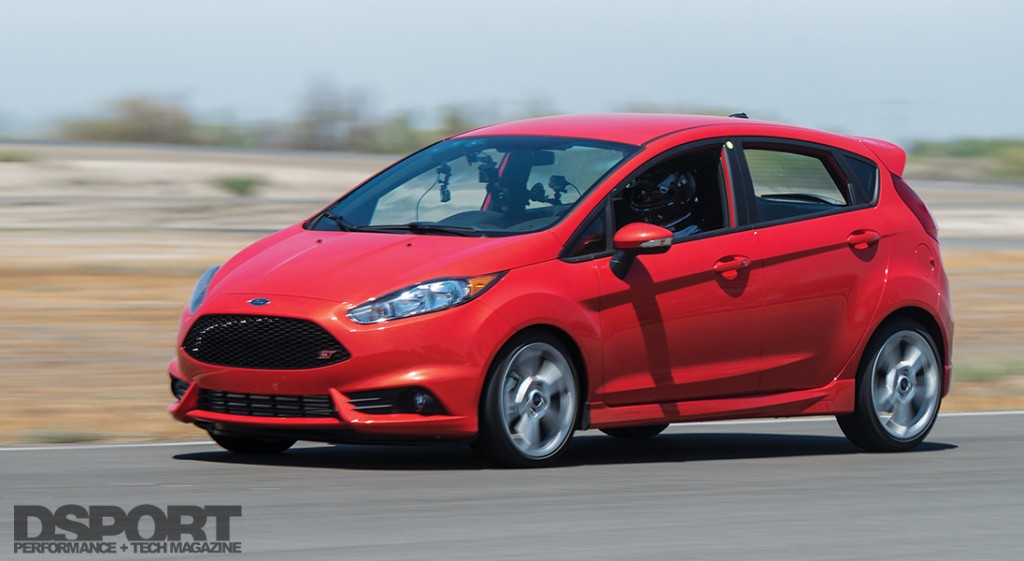 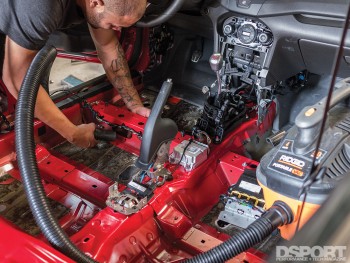 Although the car’s performance picked up from the first to second stage, it wasn’t quite at the level that we hoped for. A 2’10.00” was within reach, and made for an appropriate goal for stage three. In order to achieve this, we threw out the idea of extra power and set out to find speed through other means. An extreme diet kicked o the third stage for the Fiesta ST. Simply put, less weight means less inertia. A lighter-weight car potentially accelerates and slows quicker, responds better to steering input, and can maintain higher speeds through turns. If you’re ever looking to reduce lap times without spending cash (and can live without the comfort features of your car), weight reduction is the quickest way there. A common but broad rule of thumb is that you can potentially shave off one second in lap times per 100 lbs lost.

We had already removed some large, basic items for the stage two build, like passenger seats and the spare tire. This time, we went further and removed nearly every unnecessary part of the car. This includes all the interior plastic and liner, airbags, in-car entertainment, sound deadening material, and windshield wiper motors. Ultimately, this lightened the 2,560 lb stage two Fiesta ST by 140 lbs, bringing the total weight down to 2,420 lbs. 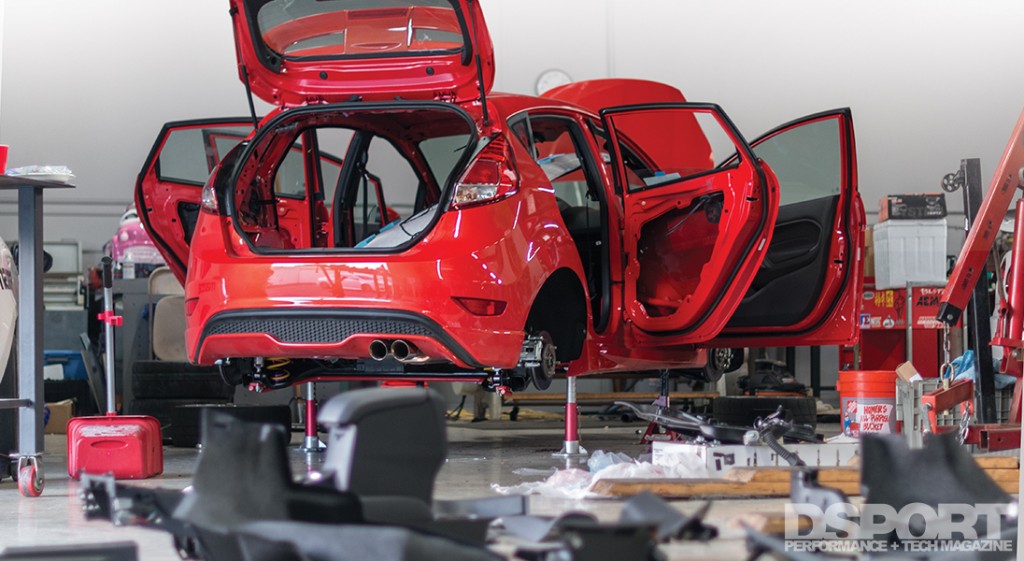 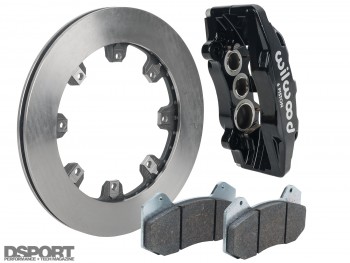 The weight reduction would likely show some improvement in stopping distances, however, we wanted to improve this even more. For stage three, we did away with the factory front calipers and rotors in exchange for Wilwood’s Forged Dynapro 6A calipers and Ultralite HP 32 Vane rotors. These aluminum calipers weigh in at just 5.2 lbs each, half the weight of the factory components. Further, the triple bridge construction and six-piston configuration make for extra strength and stiffness, while delivering an evenly spread force on the pads and rotors. The Ultralite rotors shed five pounds each off of the factory 14.6 lb rotors, with the added benefits of straight vane cooling and a lower rotating mass. Following suit with upgraded brake components, we installed a set of Wilwood BP-20 compound Street Performance/ Racing Pads, and held onto a backup set of BP-40 compound High- Temperature Racing Pads to test with. 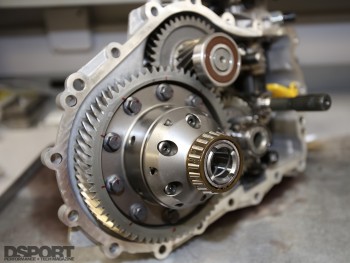 The Fiesta ST’s additional 85 lb-ft of torque over factory output led to wheel spin out of corners on the racetrack. The throttle required a delicate touch when exiting corners, but even then, the power wasn’t translating to the road surface as well as we wanted. In order to resolve this issue, Quaife/mountune supplies the ATB Helical Limited Slip Differential for the Fiesta ST. This differential directly replaces the factory open differential, and brings a handful of benefits with it. Utilizing gears instead of the conventional plate-style design with clutches, this unit is designed to be more durable, low maintenance and near silent. The ATB automatically biases torque away from a spinning wheel to maximize traction, but it also works in reverse order to benefit braking by transferring torque away from a locking wheel. While the differential would aid in putting power down to the ground, we needed to hunt down options for improvements in the suspension. 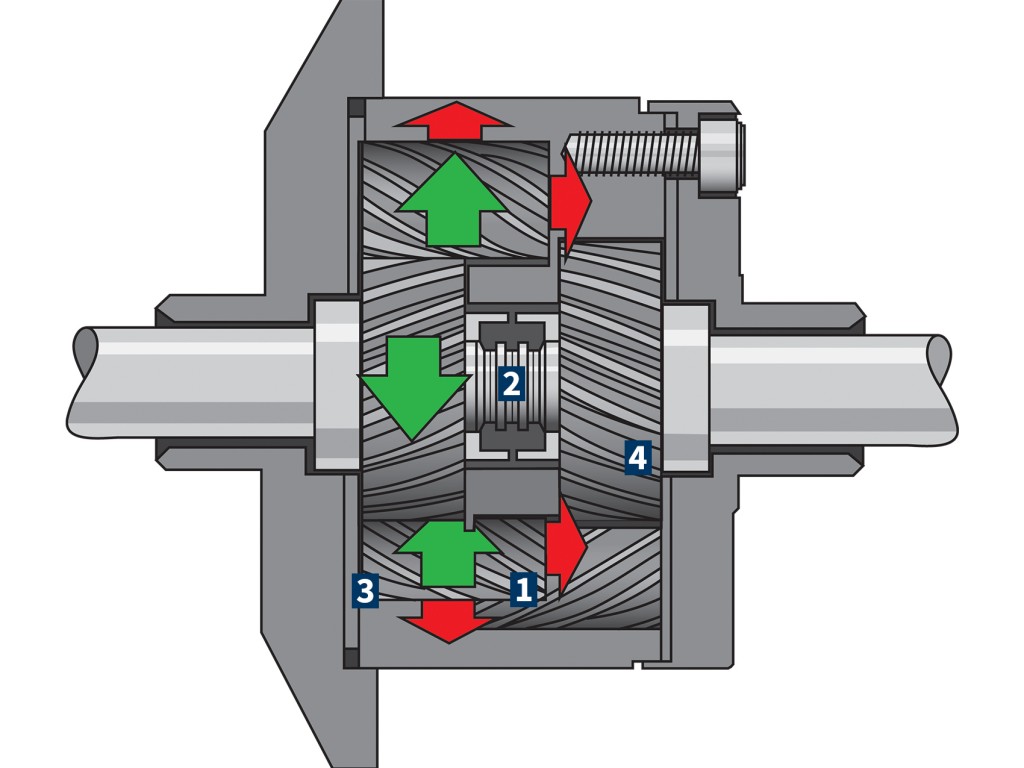 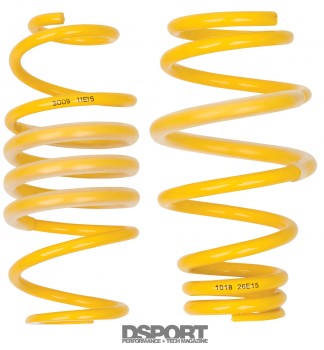 Four on the Floor

In place of the factory shock absorbers and Eibach springs setup for stage two, we utilized the KW Variant 3 Coilover Kit for the Fiesta ST, allowing us to tune the ride height as well as the compression and rebound dampening. These settings enable customization of both the vehicle’s weight transfer, and the wheels’ and tires’ responses to the road surface in order to maximize adhesion to the ground. These elements play an essential role in adjusting the handling of your car, so refer to our shock tuning (Issue #161) and corner balancing (Issue #162) stories to learn how to achieve the best setup. 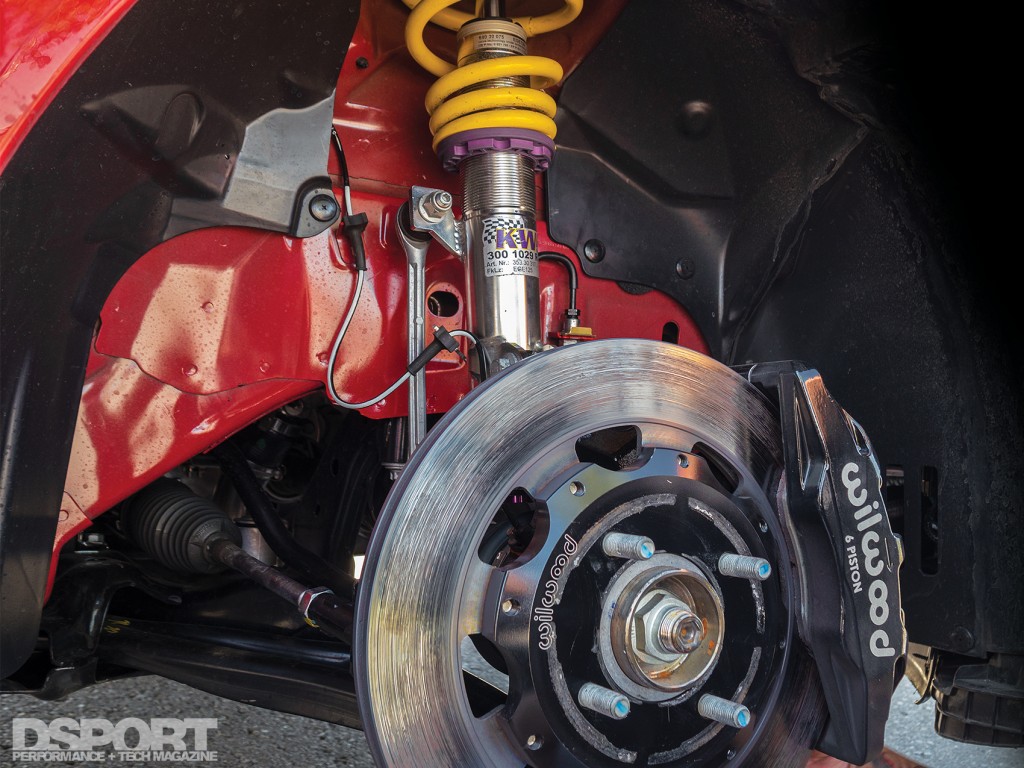 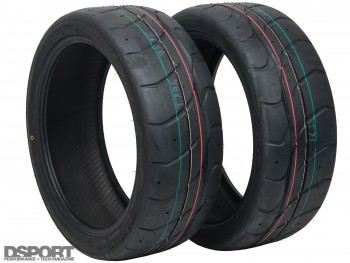 For the final handling upgrade, we acquired what every auto enthusiast wants for every birthday and holiday: a new set of tires. We wrapped the Fiesta ST’s wheels in factory-sized, 205/40R17 Nitto NT01 tires. Many autocross racers and weekend track warriors favor this D.O.T.- compliant tire, as it provides extra sticky rubber in large continuous tread blocks to maximize grip. Don’t let the D.O.T. rating fool you, this tire feels much more at home on the racetrack than on any street surface. With brakes, differential, suspension and tires in place, it came time to hit the track and turn some laps.

A fresh set of Nitto NT01 tires, paired with a racing alignment, delivered a night-and-day difference in the Fiesta ST’s handling over the factory setup 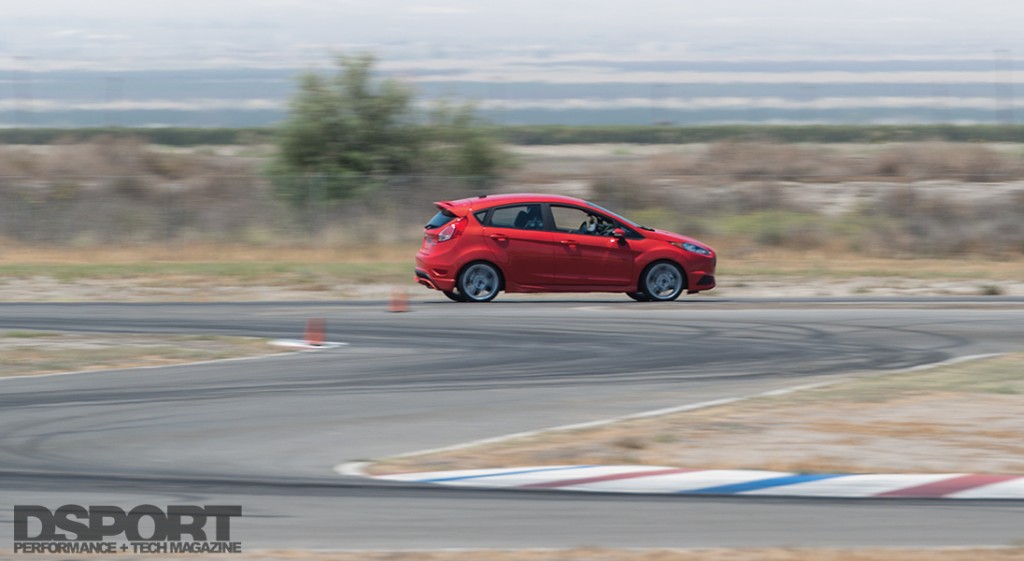 We hit our goal right off the bat, breaking past the 2’10.00” mark on every lap. The weight reduction was significant enough to make the car feel noticeably more nimble, as it felt highly responsive to throttle, brake and steering inputs. Although the progressive rate springs we used in stage two made for a healthy balance of ride comfort and handling performance, the car’s turn-in and rotation abilities took a hit. The KW Variant 3, although rougher in ride quality, aided in these areas massively. The reduced body roll and stiffer compression meant less slop between turning the steering wheel and the car responding. The benefits of the new suspension changes went hand-in-hand with the Nitto NT01 tires. Despite the strange howling wolf noises that the tires made around turns, they stuck the car to the track like glue. Overall, average cornering forces around the track improved by approximately 0.2g. This improvement may not sound like much, however, it pays off over the course of a few miles of twists and turns on track.

The Quaife/mountune ATB Limited Slip Differential laid the power to the ground like never before. On the factory differential, the front wheel speeds varied greatly when accelerating out of corners. In many of these situations, the inside wheel spun up to 10 MPH faster than the outside one, even though it travels less distance through a corner. With the Quaife/mountune unit, the wheel speeds stayed nearly dead-even around the entire track with a maximum variance of two MPH in only a few areas. This consistency between the front wheels led to more effective power application to the ground, and therefore a better takeoff out of the corners. No more walking on eggshells with the throttle, just point the car, stab the gas and let the differential do its work.

The brake upgrade for stage three made the Fiesta ST feel more like an actual racecar. To explain to those that haven’t driven a racecar before: getting on the brakes feels like hitting a brick wall in comparison your average streetcar. The Wilwood Dynapro six-piston calipers, Ultralite rotors and BP-20 Street Performance/Racing Pads took a pounding on the track without any fade. Since we had the BP-40 compound pads on-hand, we installed the set and turned some more laps. These pads are rated for more than 1,300-degrees Fahrenheit, so we stayed well within healthy operating range as we measured only up to 600- to 700-degrees at the rotors a er each session. The pads clamped down on the rotors with huge amounts of friction, enough to raise deceleration forces on track from 0.88g on the mountune street pads to 1.05g on the BP-40 pads. The Fiesta ST could now brake at the exact same marks as before while traveling three-to-five MPH faster, and spend less time on the brakes to still make the next corner at a safe speed. 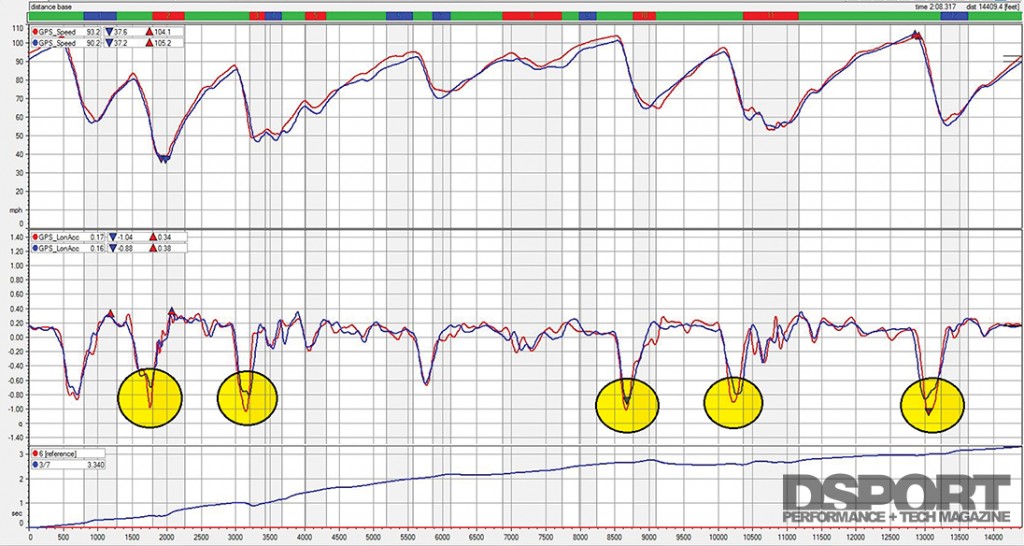 The data overlay of stage two (blue) versus stage three (red) deceleration forces reveals the effectiveness of the new calipers, rotors and pads.

1) The slowest and sharpest corner at Buttonwillow Raceway demands excellent rotation and front-end grip, both of which the stage three Fiesta ST delivered.

2) The lighter-weight platform and coilover shocks made the right-left-right change of directions much less of a handful to drive through at speed, with just a touch of helpful oversteer on entry.

3) Less weight and stickier rubber paid off through the fast sweeping turns, adding up to major improvements in overall lap time.

4) Most of the understeer we experienced through the esses in stage two disappeared in the latest build, allowing for confident full-throttle all the ways until the final turn before the main straightaway. 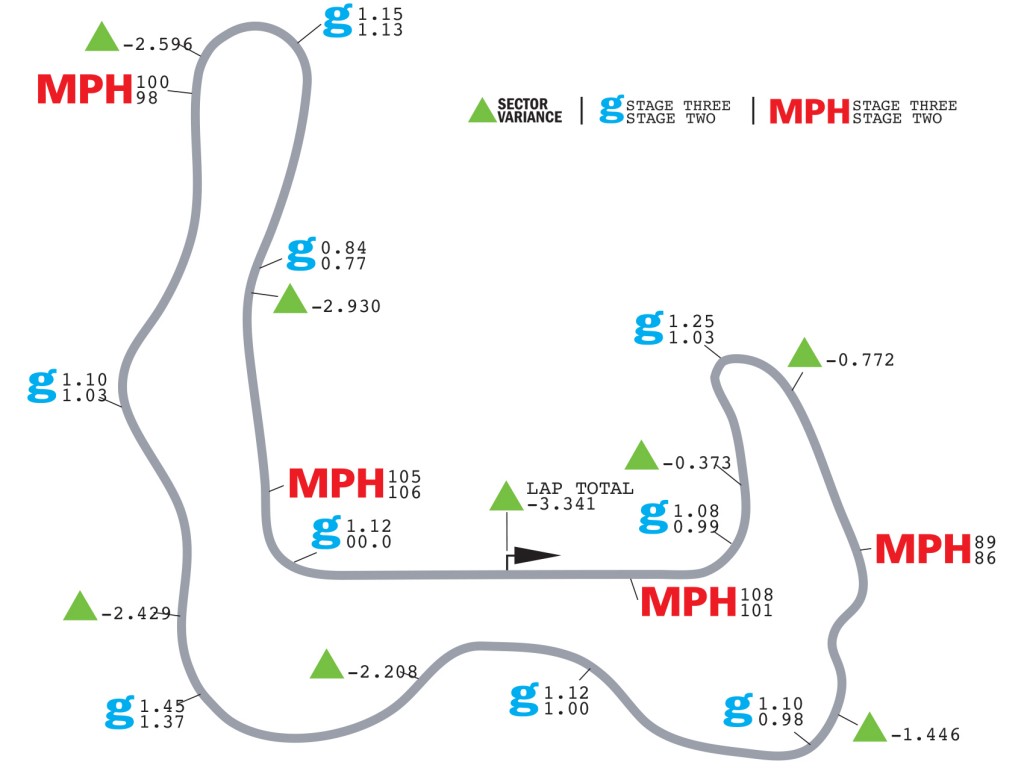 The third stage eliminated nearly every trace of handling disadvantages left in the Fiesta ST. Despite our craving for more power and straight-line speed, the vehicle’s rotation and grip capabilities are reaching full potential.

Utilizing the higher-performance pads and tweaking the shocks to our liking, the Fiesta ST lapped Buttonwillow with consistent 2’08.00”s with a fastest time of 2’08.374”. We achieved our goal and then some, with an overall better feeling and more responsive car for track driving. This third stage would act as our final level build before we turn the Fiesta ST into full-fledged racecar. With the handling and braking capabilities of the car nailed down, it’s time to focus efforts back onto making power. Stay tuned for the fourth and final stage, where the D’Garage Fiesta ST gets the full racecar treatment with a rollcage, slick tires and every last bit of power that we can squeeze out of the turbocharged 1.6-liter EcoBoost engine.

Stage three of the D’Garage Ford Fiesta ST exhibits the final version of a mostly factory appearance. Next, the car transforms into a fully caged, high- power racing monster.