Popular opinion is known to sway with the reveal of new information. This fact holds true for any segment from politics to tuning philosophies. Over the past three years as performance parts manufacturers continue to roll out different forced-induction systems for the Subaru BRZ/Scion FR-S, the general consensus on the car has shifted from “this car needs more power” to “which kit should I get?” 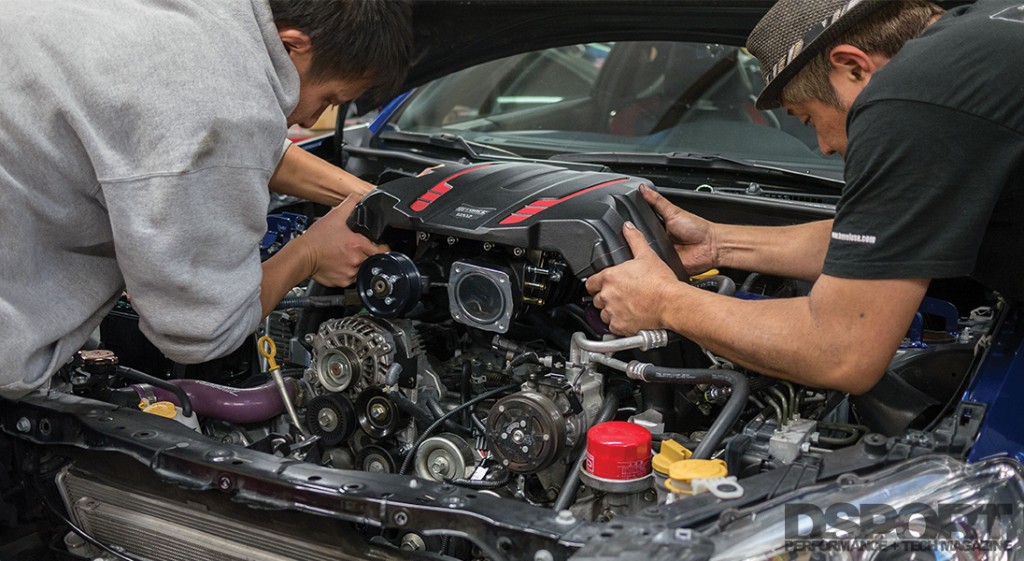 As a result of the aftermarket’s overwhelming support for this chassis, more options for power production are available for this platform than for most other popular applications. But one thing is true amongst all the options; a forced-induction solution is a no brainer for this platform.

From its humble beginnings as a service garage in Los Angeles to its current status as an internationally acclaimed performance parts manufacturer, Edelbrock remains a trusted company in the automotive aftermarket. One reason in particular that Edelbrock has withstood the test of time is its “Proven Performance” philosophy of aftermarket parts design and construction. Almost every part that ships from its facility serves a purpose in either generating more power or managing it. This is evident by its product offerings that include crate engines, nitrous kits, intake manifolds and supercharger systems.

Over the years, one major initiative Edelbrock has undertaken is to aggressively continue development of its E-Force Supercharger line. As such, the company has expanded its application offerings to include the ZC6/ZN6 platform. Just like every other E-Force system, the intention is to provide additional horsepower and torque in a clean and complete package. This translates to a minimalistic design that features as many integrated components as possible. At the heart of the E-Force BRZ/FR-S kit is an Eaton Gen VI 1320 TVS (Twin Vortices Series) R-Series supercharger rotating assembly. The R-Series supercharger features four lobes optimized for peak power generation, a perfect match for the FA20’s square engine dimensions (86mm bore x 86mm stroke). Another feature specific to the FA20 engine is the supercharger system’s unique inverted design which allows for longer intake plenum runners that facilitate optimal flow rates at high RPM. This feature delivers great drivability while supporting additional power in the mid-to-high powerband. To augment the system’s performance potential, Edelbrock also includes a stand-alone air-to-water intercooler and heat exchanger that keeps the FA20’s charge air temperatures and the operating temperature of the supercharger under control. A high- flow cold-air intake box and filter, which the company states delivers twice the amount of airflow as the factory air intake system rounds out the hardware package. Finally, a comprehensive supercharger package wouldn’t be complete without a method of tuning. To this end, Edelbrock teamed up with EcuTek for a precalibrated map that is easily flashed onto the factory ECU. With the EcuTek ProECU programming kit, every E-Force kit is ensured to have a safe and powerful tune to a claimed power level of 242 whp and 168 lb-ft of torque. 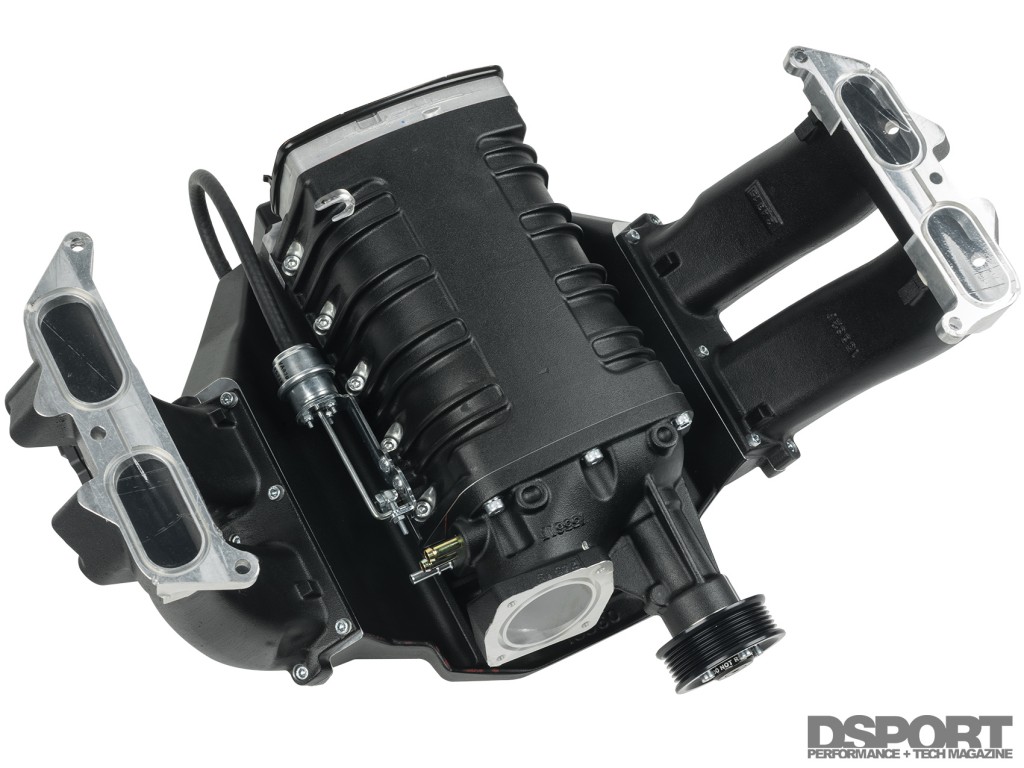 In order to fit the Eaton Gen VI 1320 TVS supercharger, the blower was mounted upside down onto the custom intake manifold. 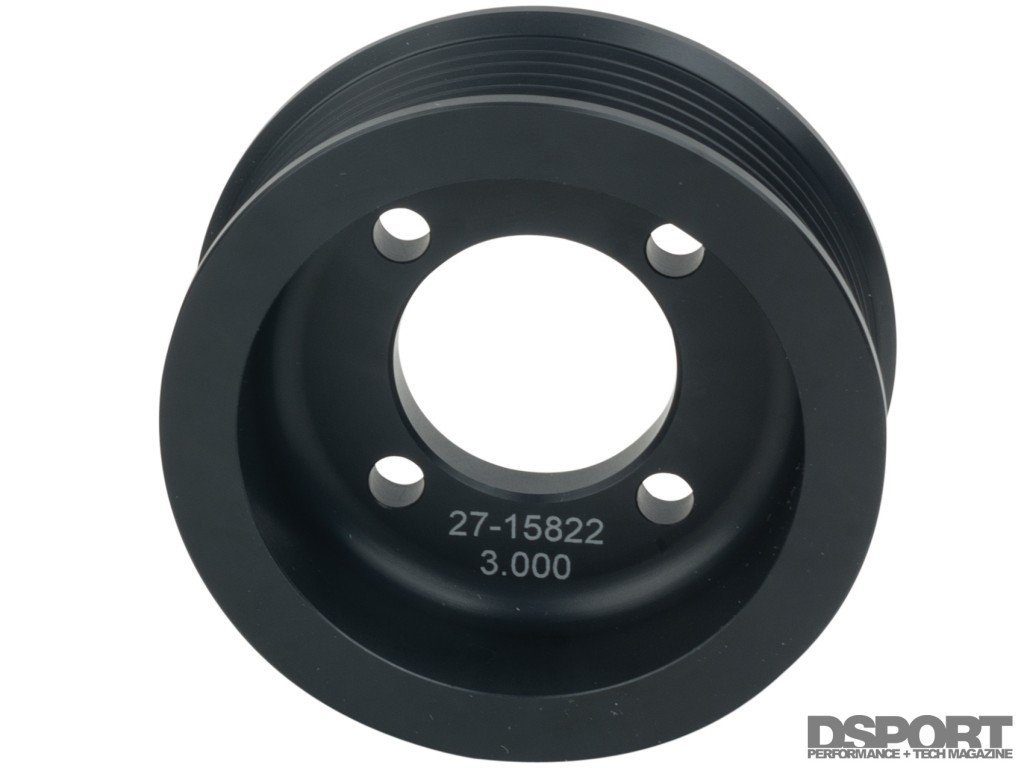 The removal and replacement of the supercharger’s pulleys is easily facilitated by four bolts and a belt tensioner.

Edelbrock went the extra mile with this supercharger system. From the finishing touches of the black powder coated finish with red accents to the E.O. certification that makes the kit 50-state legal, buyers of this supercharger are getting a lot of value packed into this kit. The engineers at Edelbrock even tackled the inherent drawback of parasitic drag common to supercharger systems. This downside is addressed by designing the kit with an integrated bypass valve which assists in eliminating the parasitic loss under light throttle input. This attention to detail is really illustrated during the installation of the kit. The entire installation is a bolt-on affair with no cutting, drilling, trimming or last- second runs to the hardware store. For an experienced mechanic with the right tools (which are listed in the included meticulous 37-page installation manual) the install should take roughly six hours from start to finish. 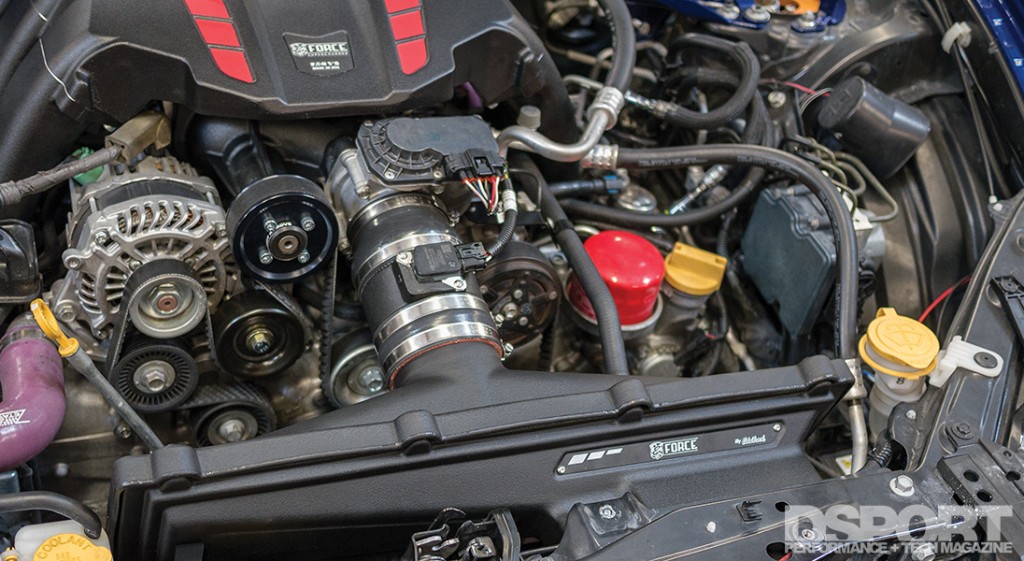 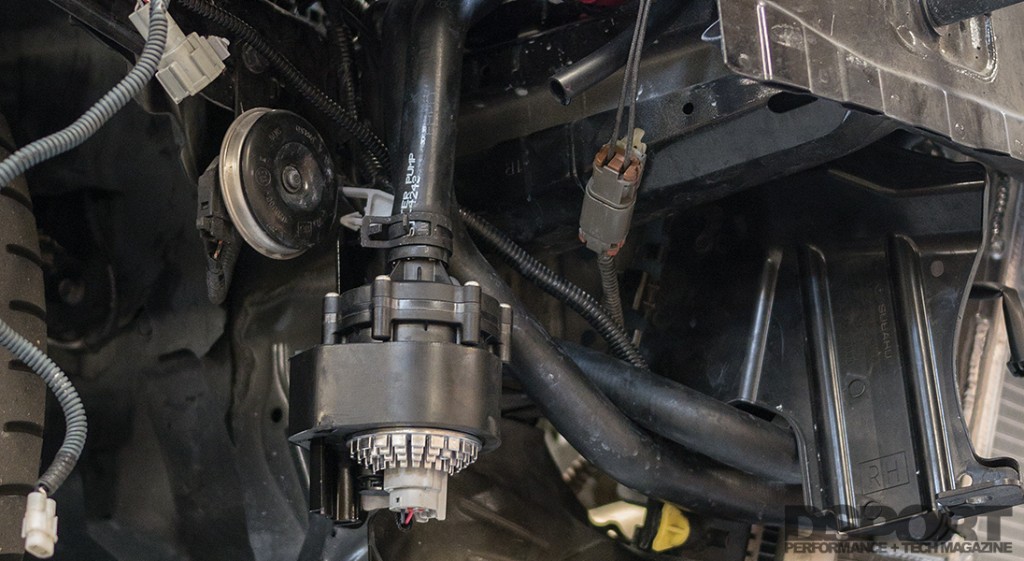 The cooling system’s dedicated water pump is neatly housed behind the front bumper.

With our test FR-S in stock trim and a tank full of 91-octane gas, the car made 169.15 wheel horsepower and 140.75 lb-ft of torque on our Dynojet 424xLC2 Linx dynamometer. These numbers were in line with what we expected from a stock FA20. Even the stereotypical torque dip between 3,250 and 4,500 RPM was present. 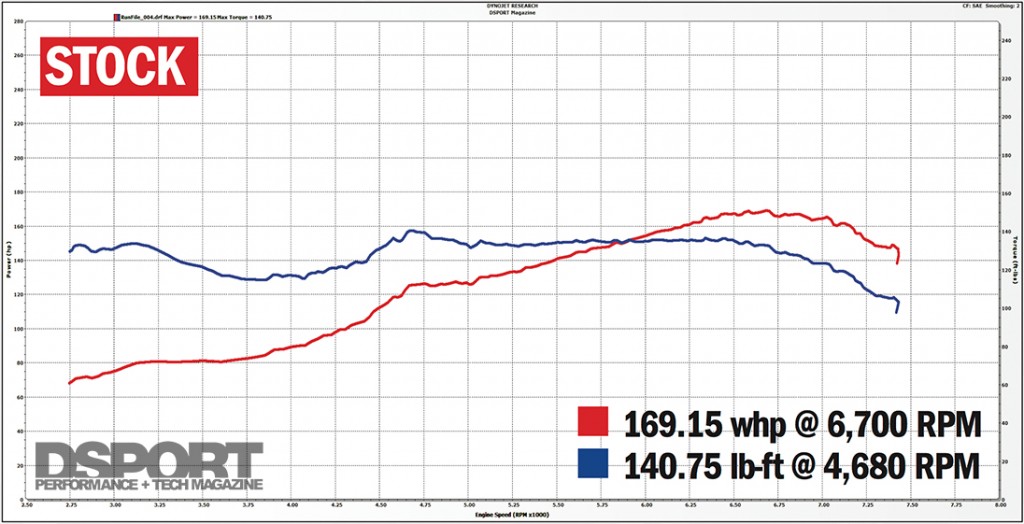 The baseline test indicated that the factory FA20 engine was generating approximately the correct level of power – but could use a boost.

Once the E-Force supercharger was installed and the supplied EcuTek map loaded onto the factory ECU, we strapped the car onto the dyno again to see the gains. The car made 232.99 wheel horsepower and 192.03 lb-ft of torque, a peak gain of 63.84 hp and 51.58 lb-ft of torque. The greatest incremental gains in horsepower occurred at 5,400 RPM with an additional 60.42 horsepower while the greatest incremental gain in torque output checked in at 4,000 RPM with an extra 65.83 lb-ft of torque reaching the rear wheels. With the supercharger, power production was linear and the torque dip was corrected. 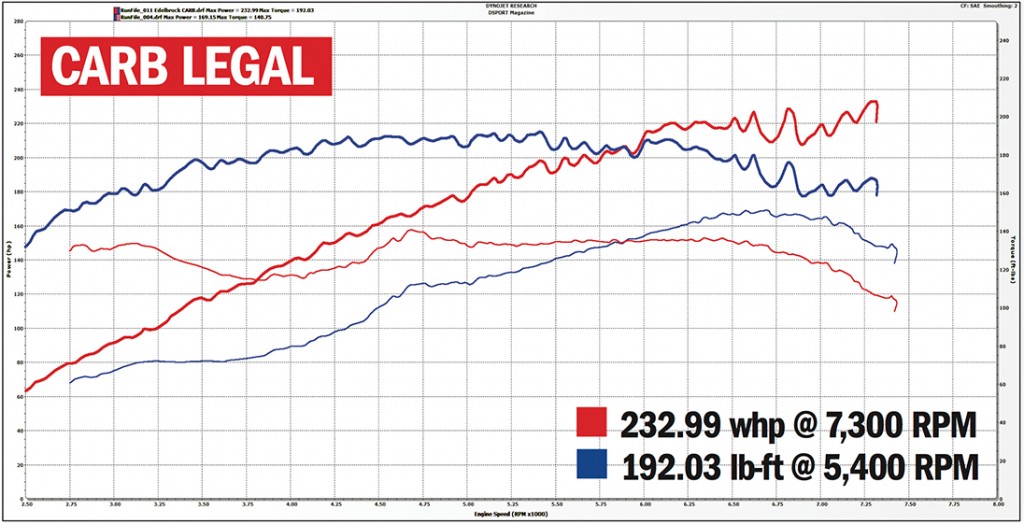 With the E-Force kit set up to the 50-State Legal configuration, horsepower and torque increased by a peak gain of 63.74HP and 51.28 lb-ft of torque.

The supercharger kit ships with a 3.25-inch pulley, the size needed to maintain street legality, but for those wishing to generate a bit more power, other options are available, including switching to a smaller pulley for more boost pressure. Another way to get more power out of the FA20 is to retune the ECU. With our go-to EcuTek tuner, Bill Knose, behind the controls of his laptop, the parameters of ignition timing and fuel tables were refined. Knose was able to extract an additional 21.91 horsepower and 12.64 lb-ft of torque bringing the numbers up to 254.90 hp and 204.67 lb-ft. 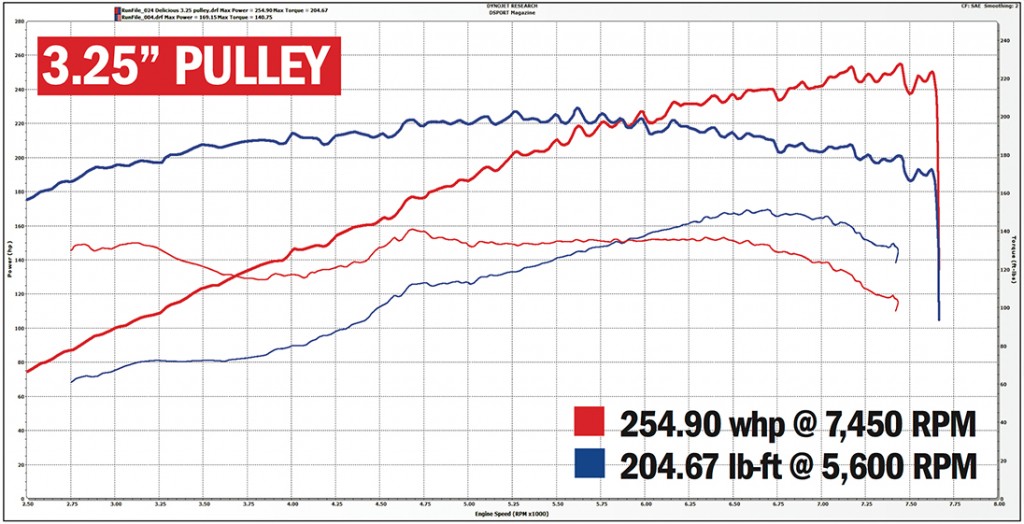 Bill Knose of Delicious Tuning created a custom map to extract more power from the supercharger with the 3.25-inch pulley in place.

Once we were satisfied that the FR-S was producing all it could in that configuration, we moved onto the second option, to pull more performance from the supercharger. To do so, we swapped the standard 3.25-inch pulley to the next size down (3.00-inch). Again, Knose made the necessary corrections to the engine calibrations to land the maximum numbers at 269.38 hp and 217.70 lb-ft of torque. 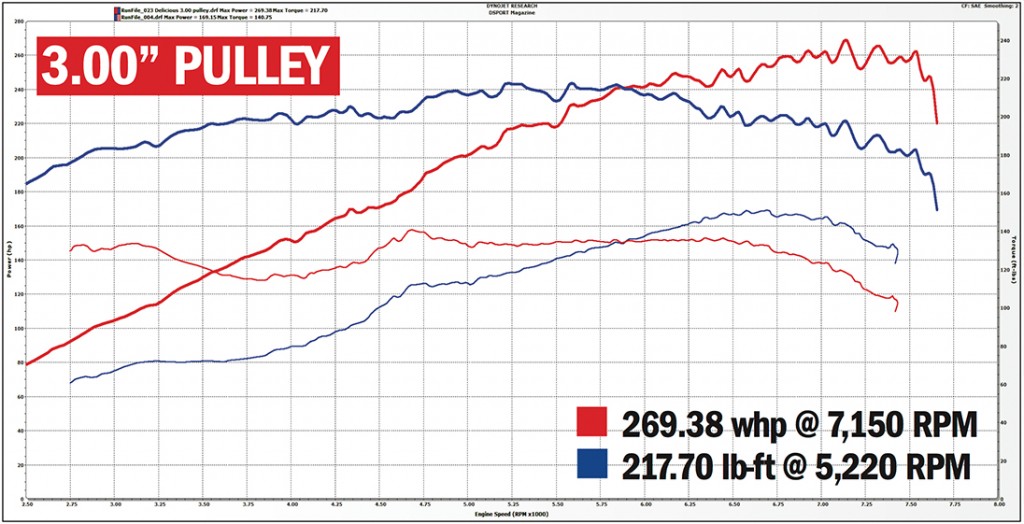 Several pulley sizes are available from Edelbrock. For this test, a 3.00-inch pulley was used to increase boost pressure and produce more power.

With the 50-state legal pulley and tune, the FR-S generated an additional 63.84 hp and 51.28 lb-ft of torque. In the higher power configuration, the FR-S cranked out an additional 100.23 horsepower and 76.95 lb-ft of torque over stock. Even more satisfying was the linear power production that was afforded by the supercharger. The kit corrected any dips or irregularities in the powerband. The E-Force supercharger kit for the BRZ/FR-S really shined in quality, fitment and power, offering a level of performance that matches the needs of the platform perfectly.