The drag strip offers one of the safest forms of competition, welcoming drivers of any skill level with vehicles of any power output to compete in a controlled and safe environment. Often times, days of competition go by without incident, however, that’s not to say that collisions and crashes never happen. Thankfully, safety requirements put in place by tracks and sanctioning bodies do a decent job of ensuring driver safety.

Jason Park is an old school import drag racer, competing at events since the turn of the millennium when import drag racing reigned supreme. After taking a break from racing to pursue real estate, Park returned to the automotive industry, opening Fluid Control Systems (FCS) in 2008. His original purpose was to develop fluid transfer components that improved safety for the drivers. Racing as often as he did, the prototypes were often tested on his favorite import, a DC2 Integra. Hoses and fittings formed the foundation of his business, before he saw a need for a slightly larger capacity fuel cell. He then developed a 5-gallon aluminum fuel cell that replaced the stock fuel tank. The FCS fuel cell soon gained broad adoption by import drag racers across the country. Continuing to pursue his passion for drag racing, that focus soon broadened as his creativity and fabrication skill set led to the development of non-fluid related products. From aerodynamics and camshaft degreeing kits to suspension and brake components, Park’s eclectic product line had become well diversified. But the common thread for each part he developed came back to high performance and racing. 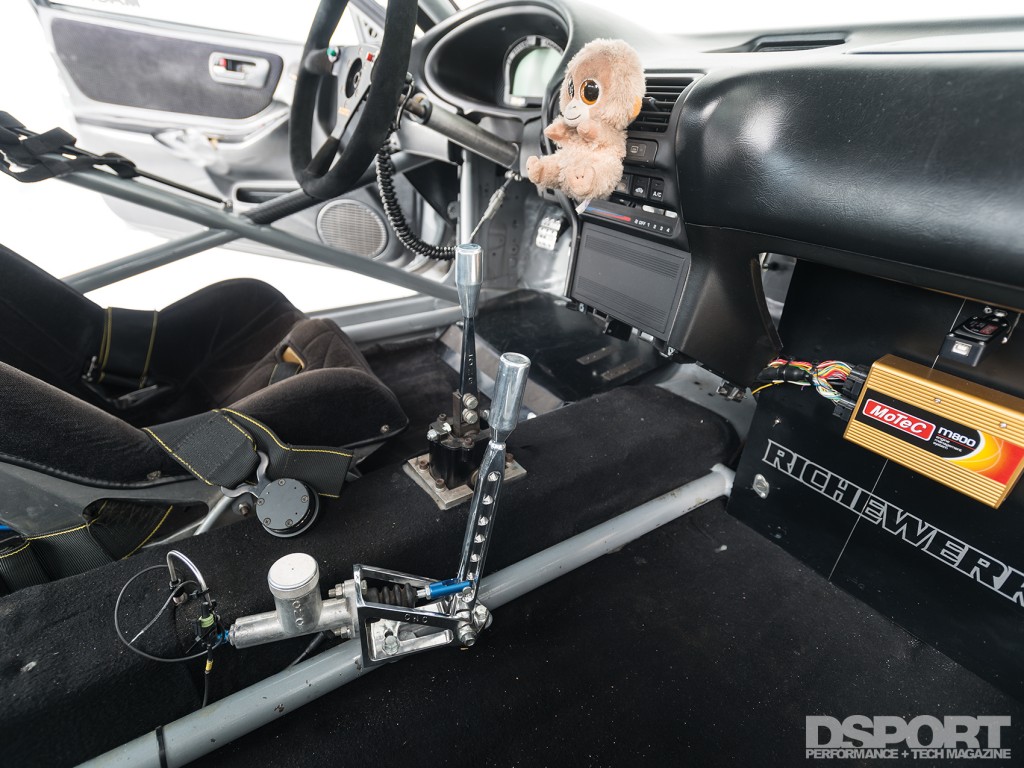 While the interior retained the dash and door panels, it is now home to a MoTeC M800 engine management in the passenger footwell. A hydraulic hand brake is positioned within easy reach of the driver.

For a vehicle to be competitive in the low ten-to-high nine-second range, trap speeds in excess of 130 mph could be expected. Park had accomplished this goal with the Integra, running deep in the nines and trapping over 160 mph. He then began working with driver Chris Cook to push for even quicker times. Unfortunately, one ill-fated day on the track in late 2010 led to a 135 mph crash into a k-rail. Thanks to compliant safety gear, a well- designed cage and proper equipment throughout the vehicle, Cook managed to escape without any terrible injuries. This unfortunate event was also a reminder to the team about the importance of safety equipment. 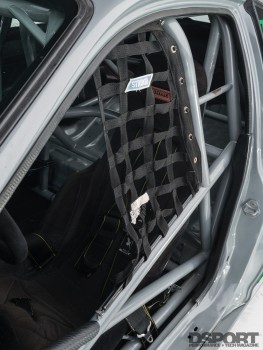 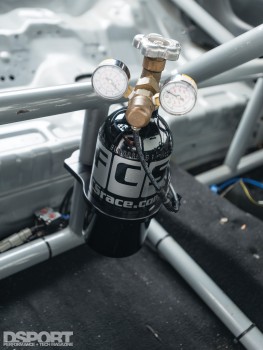 (L) The SFI 25.5 compliant cage includes added fortification to ensure the driver’s safety. A window net keeps the driver’s limbs inside in the case of a crash. (R) FCS installed a CO2 cannister to help maintain wastegate vacuum pressure and ultimately, boost pressure.

Park’s passion for the Integra ran deep, and he was focused on getting another DC2 right away in preparation for the next season. But he wanted to take this opportunity to build up the chassis in greater detail than before. He explained, “The first Integra had already been pushed to advanced stages of development, running deep into the nines and trapping over 167 mph. Prior to the crash, I didn’t really see a practical way to justify disassembling a functional and competitive racecar to build up the chassis. After the crash, we inspected the chassis and came to the realization that the build could have been stronger and safer. All I could think of was how to make the next car even better. We had so many years of development into the car that another DC2 made the most sense.” A friend happened to have a 2001 Integra RS chassis that was offered to Park. He accepted immediately and brought his truck and trailer to pick up the shell. After bringing it back to the shop, Park and his team got straight to work. 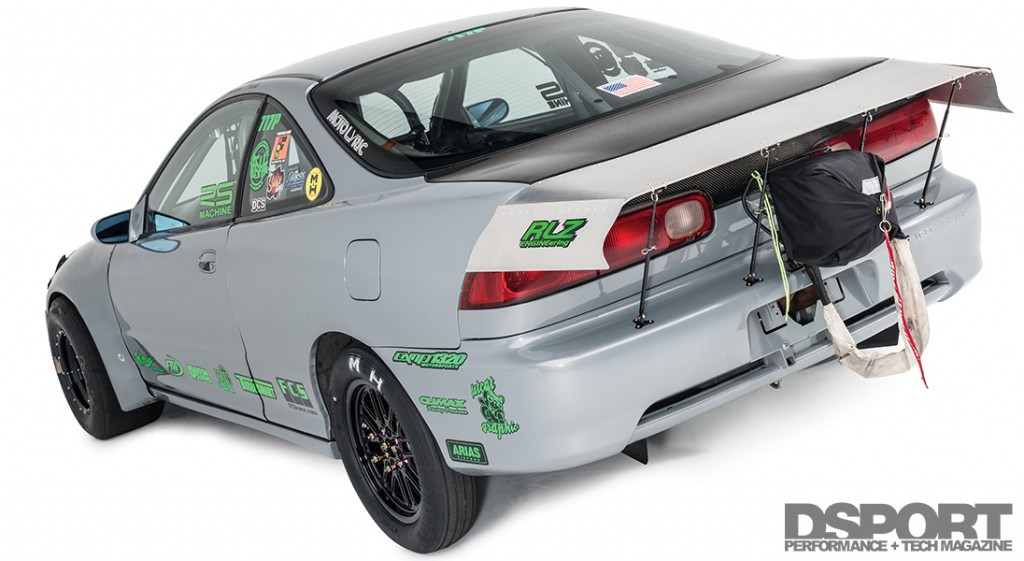 Unlike the previous car, which made numerous trips down the strip while putting in street time on the weekends, this car would be built as a true racecar from the ground up. The RS shell was stripped down and then acid dipped. Acid dipping the chassis not only removed seam sealer and helped to reduce some weight from the chassis, it also left behind a clean and fabrication-ready surface. When the chassis returned to the shop, it was stitch welded to improve chassis rigidity before fabricating an SFI 25.5 Spec cage to further stiffen and fortify the chassis in anticipation of a high-output engine and quick, single-digit time slips. 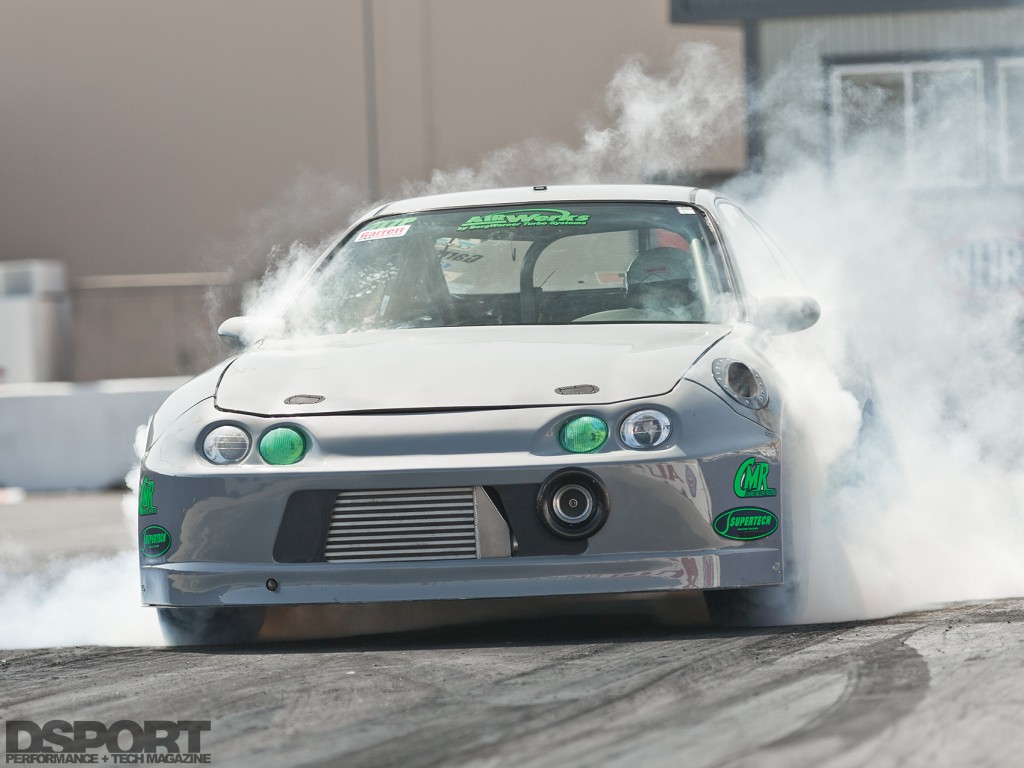 Now that the chassis was prepared, it was time to begin the driveline reconstruction. The B18C engine has propelled each of Park’s previous Integras, and he saw no good purpose for changing things now. The block features Darton M.I.D. iron sleeves bored to 85mm. Arias 11.7:1 compression pistons, manufactured to FCS Race specifications, fill the cylinders while custom GRP aluminum connecting rods make the connection between the pistons and the 89mm factory B20 crankshaft. Together, the rotating assembly increases the displacement of the engine to 2,020cc, a displacement increase of 12 percent. Up top, the cylinder head was put through RLZ Engineering’s 5-axis CNC cylinder head port program before being equipped with a new Supertech valvetrain. The VTEC rocker arms and lost motion assemblies were replaced by a set of Web Cam rockers that lift the valves by way of Web 595 Spec VTEC killer camshafts. 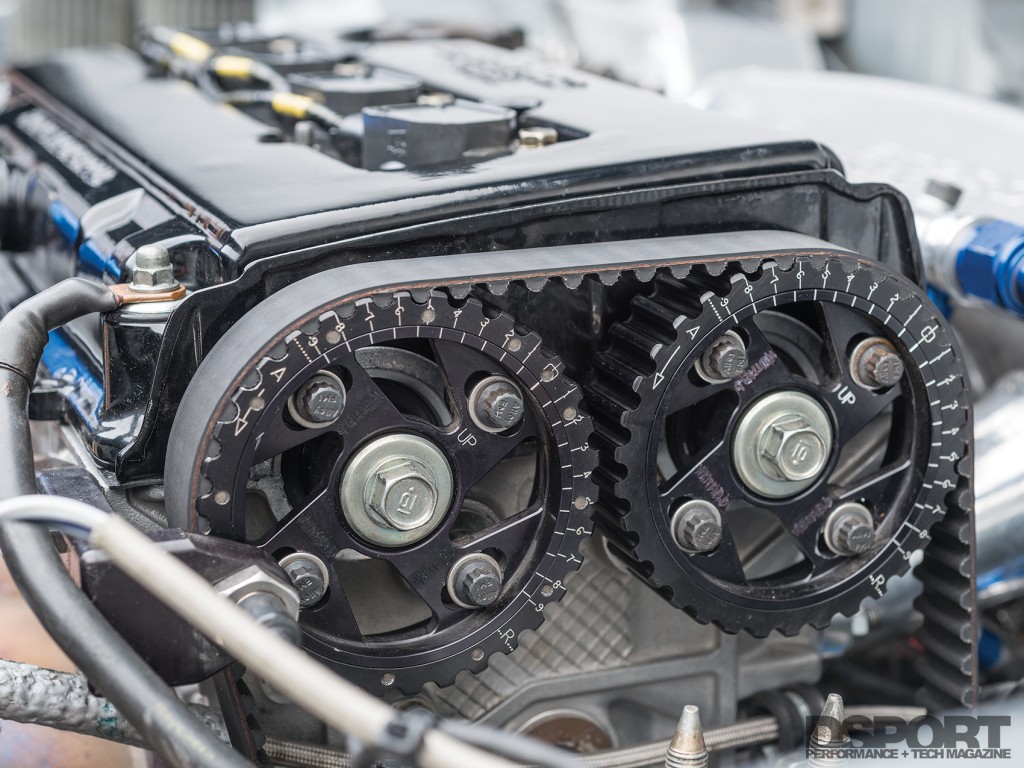 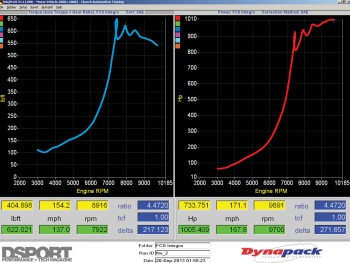 To generate the volume of air needed to fill the cylinders and produce the power needed to reach single digit time slips, Park chose BorgWarner’s Airwerks S400SX turbocharger for the duty. FCS Race fabricated an equal-length manifold that positions the forward-facing turbocharger adjacent to the custom Garrett intercooler, with the compressor discharge feeding directly into the end tank. Once cooled, the now denser air charge is distributed to the intake ports by way of a BMC Billet Pro Modular intake manifold. Dual 220 lb/min Fuel Injector Clinic injectors at each runner atomize FTW Purple race fuel into the air stream. With 42 psi boost pressure cramming the mixture into cylinders, Nate Tasukon refined the fuel and ignition tables. The Integra spun the rollers of a Dynapack dynamometer to a peak output of 1,005 horsepower and 622 lb-ft torque. 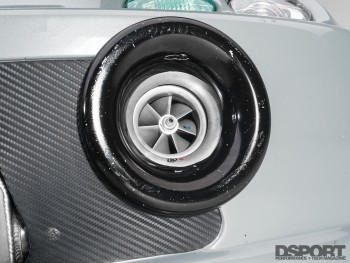 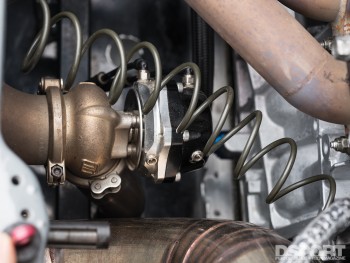 A 50mm Turbosmart Progate50 external wastegate works with a MoTeC boost control solenoid and the M800 Engine Management to keep the manifold pressurized at 42 psi.

Getting Rid of Gremlins

Park and his crew finished the Integra in only eight weeks and were out on the track in the pursuit of quicker time slips by the spring of 2011. Unfortunately, they suffered from an inconsistent misfire and ignition break up at the top end. Troubleshooting intermittent problems has to be one of the most frustrating experiences and this problem hampered the team for nearly three years. While some passes went off without a hitch, others would see problems reoccur, almost always during eliminations when the run counted the most. After changing out numerous parts from ignition components to the engine management system, Park happened to notice an irregular fluctuation in his fuel pressure during one of many test sessions on the dyno. He discovered that the problem was the base fuel pressure. It was set at about 65 psi instead of the 50 psi it was supposed to be at. This caused an abnormal fuel pressure drop under boost, which would in turn cause a lean condition and the characteristic misfires. Once resolved, the Integra ran flawlessly. 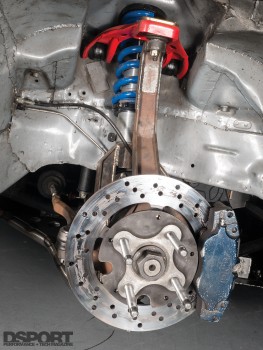 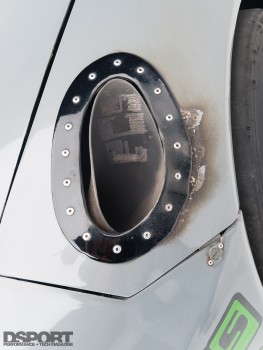 (1)CNC worked with FCS to develop a small diameter brake system with stout four-piston calipers to fit the barrels of small diameter drag wheels. (2) An exhaust dump tube directs the exhaust gasses from the turbocharger out through the fender. (3) A drag chute assists the brakes with speed reduction at the top end of the track.

Honda’s Variable valve timing technology revolutionized the import market. This sophisticated mechanism was made attainable to the masses back in 1989 with a VTEC engine debuting in the JDM Honda Integra XSi. Not only did this valvetrain enable the engine to benefit from two different camshaft profiles, it also led to a higher flowing and more efficient cylinder head design. Subsequently, these engines had a greater output-per-liter than most exotic car engines at that time. 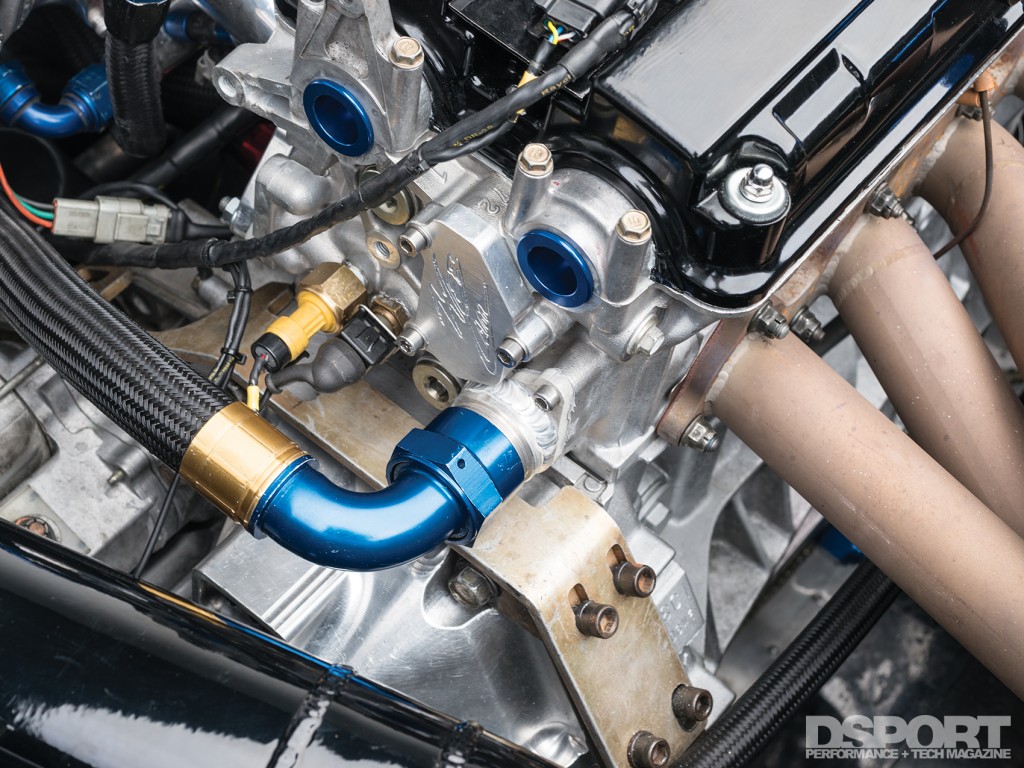 So why kill the VTEC? VTEC offers the best balance of bottom end torque (low cam profile) and top end power (high cam profile) in most applications. In the case of forced induction drag racing, where the engine will spend the majority of its time at the top end of the RPM range under boost, the low profile camshaft is not as beneficial. Eliminating the VTEC feature by switching to a non-VTEC rocker configuration reduces the complexity and mass of the valvetrain. Furthermore, eliminating the need for a third cam lobe reduces the mass of the camshafts. Together with higher lift, longer duration cam profiles, a rocker conversion would make a high boost, high horsepower VTEC engine thrive at the top end, where it would spend all of its time in a drag race.

On June 30, 2014, the team reached another milestone, breaking into the eight-second realm with an 8.990-second pass at 167 mph. Park recalled, “Throughout the last three years, we established a solid camaraderie within the team. After the crash, many privately funded teams would have thrown in the towel. Instead, we dove right back in, solidifying our relationship and trust together during a challenging time. Now we function like a well-oiled machine. Finally going eights, well, that was another goal, a personal one for me.” Park now plans to lead his team into the new year with a second racecar, based on another Honda chassis. With knowledge and experience on their side, the FCS team plans to take on the drag strip once again in 2015. 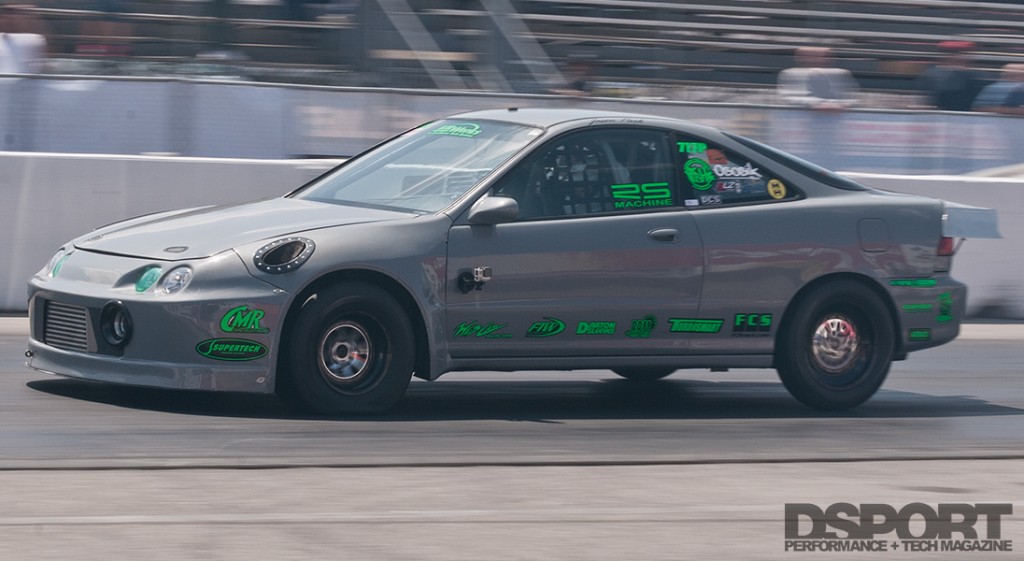