It has been four months since the Supra A90 went on sale. We’re already seeing tuners modifying the Supra to run nines and tens in the quarter-mile. The Supra is not a car that you leave stock. While some enthusiasts criticize the collaboration with BMW for the 2020 Supra, the upside is BMW’s B58 engine. The B58 has been in production for a few years, which means aftermarket support is already available. DTE Systems out of Germany is one company with massive amounts of BMW tuning experience. Since we experienced great results with DTE Systems’ Power Control X system on our 2017 Ford Mustang, we were excited to learn about its offering for the 2020 Supra. 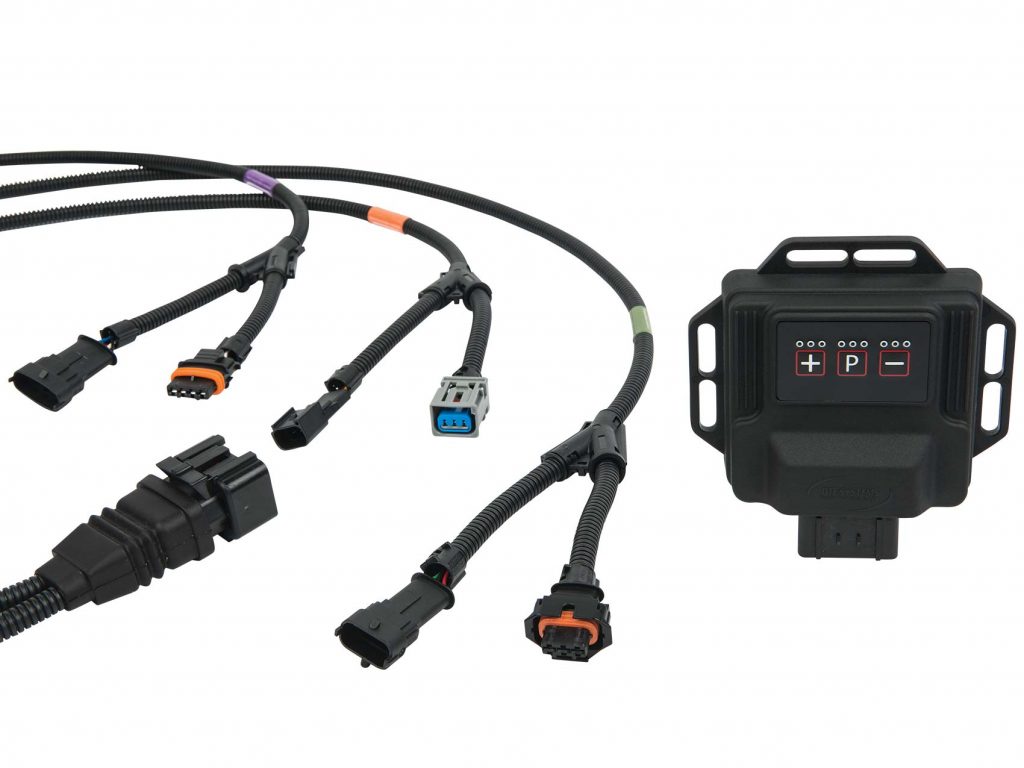 On the 2020 Supra, accessing the three sensors needed is a breeze. All sensors sit right on top of the engine. 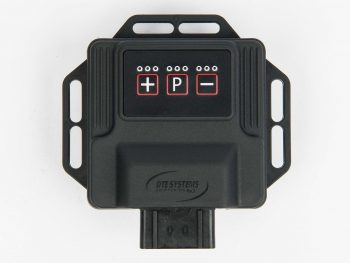 In issue 208 of DSPORT Magazine, we provided a thorough explanation of how the Power Control X works. To summarize , DTE Systems’ Power Control X is an engine tuning solution popular in Europe. Unlike a standard ECU reflash, the Power Control X does not alter any of the information stored in the factory ECU. There is no reflash that takes place. Instead, the Power Control X plugs into the camshaft sensor, intake manifold pressure sensor, and boost sensor. The Power Control X computer alters the sensor signals before they are sent to the ECU. As a result, the ECU cranks up the boost, resulting in an increase in boost and more power and torque. For instance, if the ECU’s target boost is 20 psi, the signal going into the ECU will be intercepted and changed to reflect a boost pressure of 15 psi, when it is actually 20psi. The ECU will increase the boost to meet its original target, therefore increasing the actual boost to 25 psi.

As one of the most anticipated sports car in decades, the 2020 Toyota Supra A90 rocks an inline-six 3.0-liter turbocharged engine. The turbocharged engine works alongside an eight-speed automatic transmission to send power to the rear-wheels. Toyota rated the all-new Supra at 335 horsepower and 365 lb-ft of torque, with a 3,397-pound weight and a top speed of 155 mph. The A90 is capable of reaching the 60 mph mark from a standing position in just 4.1-seconds, and a quarter-mile time can be achieved in 12.3-seconds at 113 mph. We drove the Supra on the track multiple times, and we see great tuning potential. 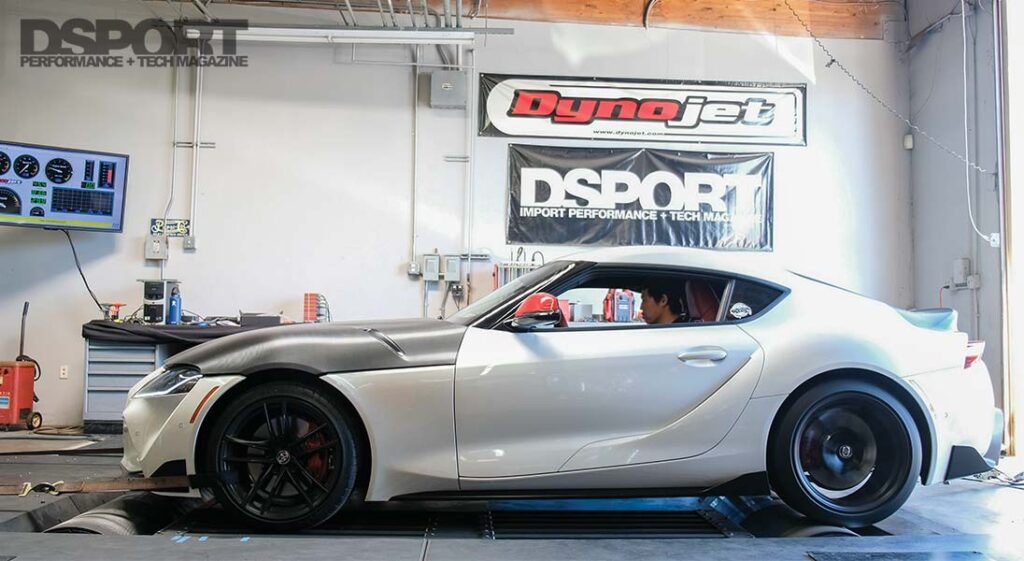 We strapped the 2020 Supra to our Dynojet 224x Linx chassis dyno. In its completely stock form, the Supra put down 315.04whp and 349.68 lb-ft of torque. Peak torque comes on early as promised by Toyota and power continues climbing until redline. Installing the DTE Systems Power Control RX on the Supra is a breeze. All three sensors sit on top of the engine. Installing the system is simple with the engine cover being the only part removed. After installation, we set the Power Control RX to the Sport + mode and ran the car on the dyno again.

In the Power Control RX Sport + mode, the 2020 Toyota Supra A90 put down a peak 339.23 horsepower and 434.82 lb-ft of torque to the rear wheels. This is a gain of 24.19whp (7.7%) in peak power and a gain of 85 lb-ft  (24.2%) in peak torque. The massive peak torque gain is still available early in the RPM band. By simply plugging these numbers into a calculator, the Supra with a Power Control RX should run 12-seconds flat or 11.9-seconds at 116 mph. Although you could even see lower numbers with this massive torque gain. On the street, the Power Control RX completely changed the behavior of the Supra, and without quality tires, you can expect the rear to dance around upon launch. So, who is this system right for? 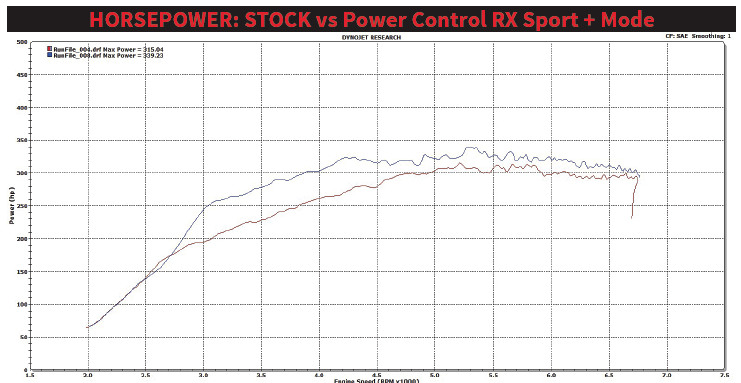 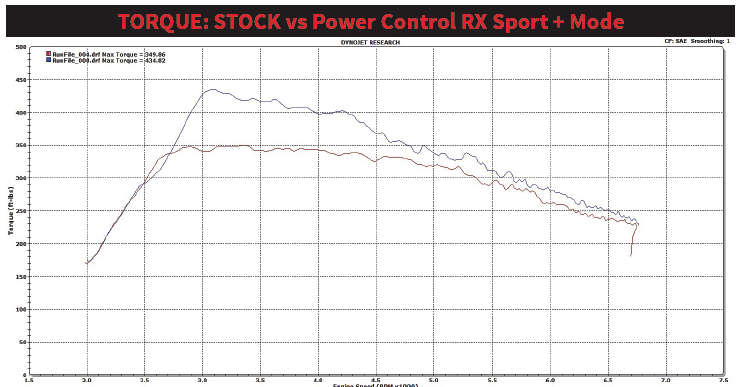 The Power Control RX increased the torque by 85 lb-ft, while still peaking early in the RPM band.

Not everyone buying the all-new Supra will want to start replacing major components right off the bat. The Power Control RX serves everyone looking for a light-tuning solution. It leaves no fingerprints in the ECU, and it’s a true plug-n-play solution. If you live in another state with better fuel quality than California, you should expect better horsepower and torque numbers than what our Supra put down. The higher octane will also allow you to go to the more aggressive power modes in the Power Control RX. In our case, poor fuel quality prevented us from seeing better numbers. Why? As the boost increases, the ECU detects knock, so it pulls timing, and it ends up costing us power and torque. DTE Systems’ Power Control RX for the 2020 Toyota Supra has undergone vigorous testing in Germany, meeting the TUV safety standards. The DTE Systems Power Control RX for the 2020 Supra retails at $799 ($719 without the phone app and just two power levels). While the Power Control RX has some advantages over reflashing (as nothing is disturbed on the factory ECU), we hope to see the pricing become more compeitive to reflashes in the near future. If you just bought a new Supra and you just want a little more excitement, DTE Systems’ Power Control RX can deliver.