For every action, there is going to be a reaction. Over the past few years, automakers have taken action to develop turbocharged gasoline direct-injection (TGDI) engines to deliver a previously unachievable balance of specific output (horsepower-per-liter) and fuel economy. Today, a 2.0-liter, 4-cylinder TGDI engine can put out the horsepower and torque of an engine more than twice its displacement when the pedal meets the metal. During cruise, the same engine can sip only a fraction of the fuel a non-direct-injection (port fuel injection) larger-displacement engine would require. Unfortunately, direct-injection does have some drawbacks that weren’t known about or considered when the technology came to market. The formation of massive intake valve deposits on direct-injection-only engines (problem doesn’t occur on engines that use both port and direct-injection) leads to massive restrictions in airflow to the cylinders. The result is a progressive loss of horsepower as the deposits build. You may have heard about this or know someone that had to have a direct-injection vehicle serviced for this issue. In the short run, all you can do is do whatever needs to be done to clean the deposits once they form. The best long-term solution is to employ some type of system (water-injection or water-meth injection) that regularly cleans the intake valves. While this issue is annoying and power robbing, Low Speed Pre-Ignition, or LSPI, is a more serious issue that can cause catastrophic engine damage. 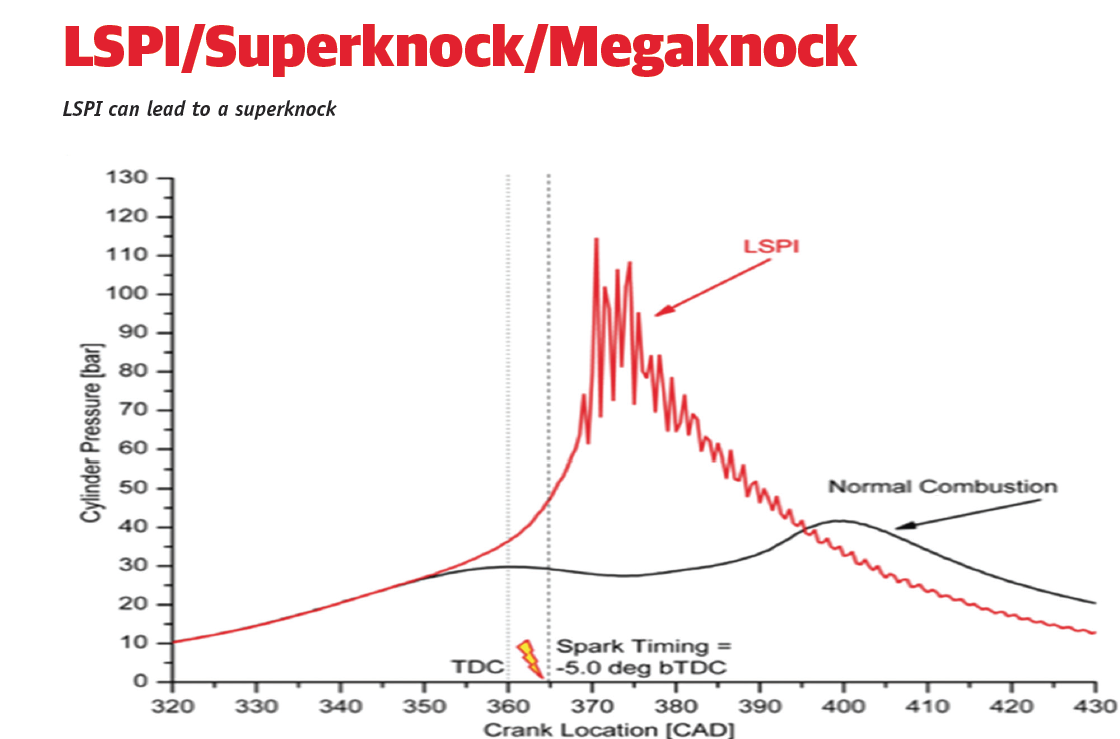 When TGDI engines are subjected to conditions where they are under considerable load at low engine speeds, they are more susceptible to pre-ignition than a non-direct-injection engine. Current theory says this is most likely due to the limited time that the liquid fuel has to change to a gaseous state in a direct injection engine. With direct injection, fuel can only be injected into the cylinder during the intake stroke and compression stroke before ignition occurs. At best, you have 50% of the time for the fuel to vaporize. In comparison, a port-fuel injection engine can be injecting fuel at the back of the intake valve during all four strokes. Fuel sitting at the back of the valve can use the heat of the intake port to begin the vaporization process even before it makes its way into the cylinder. So what is so bad with non-vaporized fuel? Liquid fuel can combine with emulsified motor oil to form a mixture that has a high-propensity to auto-ignite. What does that mean? It’s easiest to explain with either the low-octane or diesel analogy. We are all aware that low octane fuels are more likely to knock/detonate. The mixing of emulsifier engine oil and gasoline creates a lower-octane mixture more likely to detonate. For those more familiar with the functions of a diesel engine, you can think of the emulsified oil and gasoline turning into a diesel fuel that ignites due to the heat and compression in the cylinder, rather than the spark. 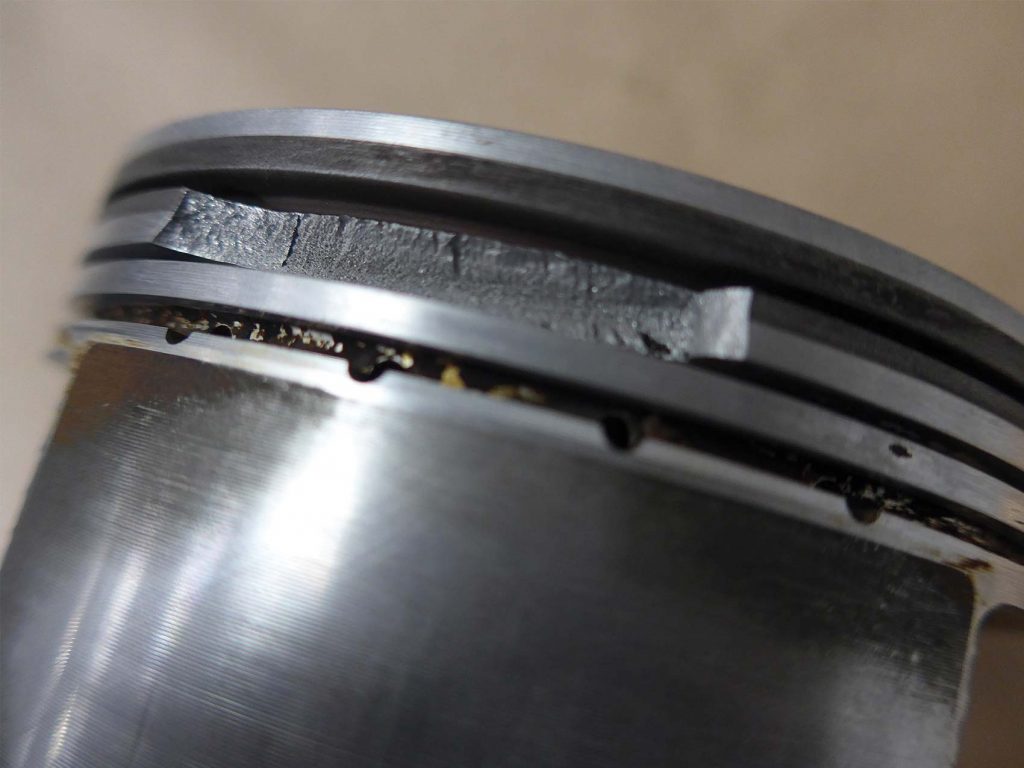 When pre-ignition leads to a detonation or knock event, piston ring lands can become the victims. Even if you are lucky enough to avoid this damage, smaller preignition knock events can lead to accelerated rod bearing wear.

Although the majority of pre-ignition events initiate detonation, these are two separate phenomena. While all attempts should be made to avoid both pre-ignition and detonation, a better understanding of the differences leads to more effective solutions.

As its name implies, pre-ignition refers to the ignition of the air-fuel mixture in the cylinder before the spark plug is fired. Instead of the spark igniting the air-fuel mixture, ignition occurs due to the temperature and pressure in the cylinder (much like in a diesel engine, hence the nickname dieseling). There are many potential culprits that contribute to the conditions that allow for pre-ignition to occur. Traditionally, excessive carbon buildup in the combustion chamber and piston crown can limit the transfer of combustion heat to the cooling system. As a result, the in-cylinder temperatures during the intake and compression strokes can be elevated to the point where pre-ignition can occur. Hot spots in the combustion chamber caused by sharp edges or a high-hear-range spark plug can also be the culprit as well as a cooling system with reduced efficiency (clogged radiator, insufficient fans). With turbocharged-direct-injection engines, the limited time for fuel vaporization makes these engines even more susceptible to pre-ignition. When the liquid fuel droplets combine with emulsified oil, a mixture ripe for pre-ignition is born. Pre-ignition of the air-fuel mixture has the same effect as an unplanned and unexpected advance of the ignition timing. If pre-ignition occurs very close to when the spark plug would have been fired, the amount of “ignition advance” is small and normal combustion will take place. When pre-ignition occurs even earlier, it will lead to an undesirable detonation event. 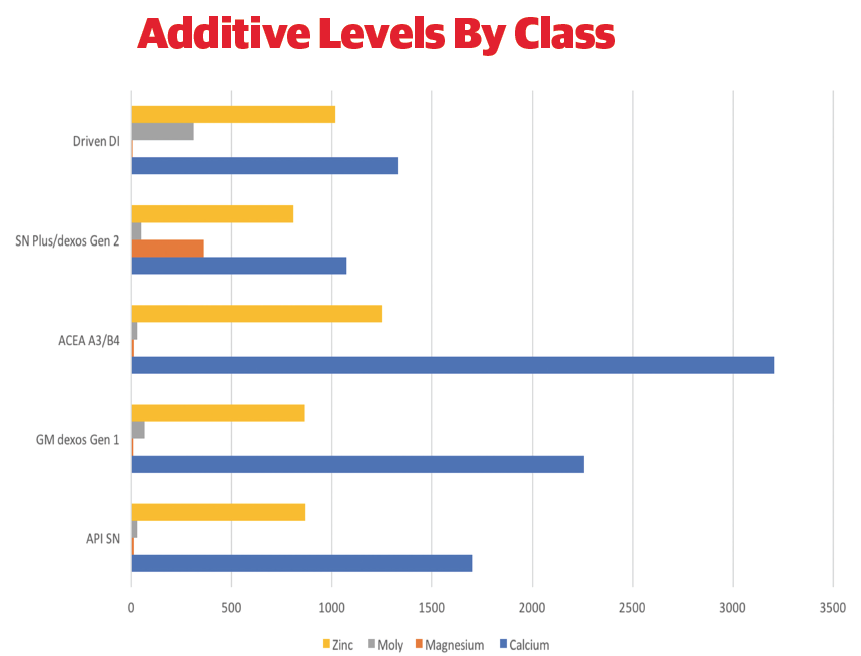 Detonation, also known as knock, is the process where the air-fuel mixture explodes in a fast and violent event. To fully understand the undesirable and damaging consequences of detonation, it’s best to have an understanding of the ideal combustion process in a spark-ignited, internal combustion engine. When the spark plug is “fired,” the spark should initiate a flame kernel at the spark plug gap. This flame grows outward usually at a rate somewhere between 350-450 ft/sec. The better the turbulence in the cylinder, the higher the burn speed. Ideally, the burn speed is as fast as possible to ensure that combustion is complete and that all of the air-fuel mixture is converted to energy. In about 2 thousandths of a second (2ms), all of the air-fuel mixture is burned. When detonation occurs, the burn speed is supersonic (faster than 1000ft/sec and typically on the order of 2500 ft/sec). The breaking of the sound barrier causes an audible knock and a violent pressure spike in the combustion chamber that can be more than three times the standard cylinder pressures. With detonation, this pressure spike is also occurring before the piston, rod and crankshaft are in position to transfer this pressure into positive energy. As a result, the top shell of the rod bearings is usually the first engine part to be affected with small detonation events. Larger detonation events, can bend connecting rods, crack pistons and blow head gaskets. 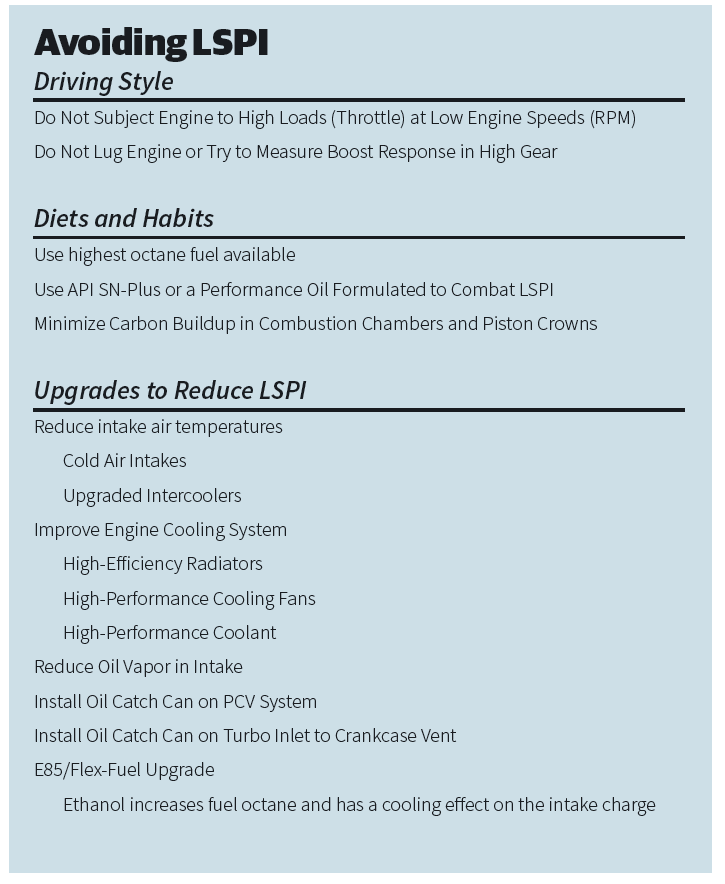 So how do you avoid LSPI in your TGDI? There are many actions that can be taken to reduce the likelihood of LSPI. These include driving style, fuel selection, engine oil selection and aftermarket parts upgrades. As for driving style, a clue can be found just looking at the name of the ailment. Low-speed means low engine speeds or low RPMs. When your engine is at low-speeds be sure to limit the load on the engine. Full-throttle and load should only be applied to your engine at RPMs where the engine is making appreciable torque. The worst thing you can do is try to be the forum hero that shows that your T-too-big turbo spools at 2,500RPM by starting your testing at 1,500RPM in 6th gear and flooring it for 10 seconds while your engine lugs and struggles. While we often joke that this is how Aidan blew up his turbocharged stock block FA20 engine, the truth is he was lugging the engine to check boost response when it detonated to pieces. Before that happens, the engine was running without incident on the chassis dyno. Once you are driving right, selecting the highest octane fuel available reduces the likelihood of LSPI. Converting to a flex fuel also greatly reduces the chances of LSPI. Additionally, using an engine oil formulated specifically to reduce the likelihood of LSPI in TGDI engines is highly recommended. As for aftermarket parts upgrades, anything that reduces the temperatures in the cylinder at the time before the spark-plug fires reduces the chances of LSPI. This can include intercooler upgrades, cold-air intakes, and engine cooling system upgrades. Unfortunately, not all of these aftermarket upgrades are legal in every state due to emission requirements.

API SN-PLUS oils and high-performance non-API oils specifically formulated to reduce LSPI (like the DI-series from Driven Racing Oil) have a different additive package than standard API SN formulations. Up through the API SN designation, it was common to use Calcium and Sodium compounds for the detergents in the additive package of the engine oil. The European-spec ACEA A3/B4 provision called for exceptionally high Calcium levels (double the levels in SN). Unfortunately, calcium and sodium compounds increase the likelihood of LSPI while ZDDP (zinc) and “moly” additives reduce the likelihood. That doesn’t mean there can be zero calcium compounds in a formulation for LSPI to be avoided, but rather that there is a threshold where it begins to be an issue. The LSPI-preventative formulation is less likely to emulsify the oil to the point that it can mix with fuel droplets to form the low-octane/diesel fuel that is prone to LSPI. 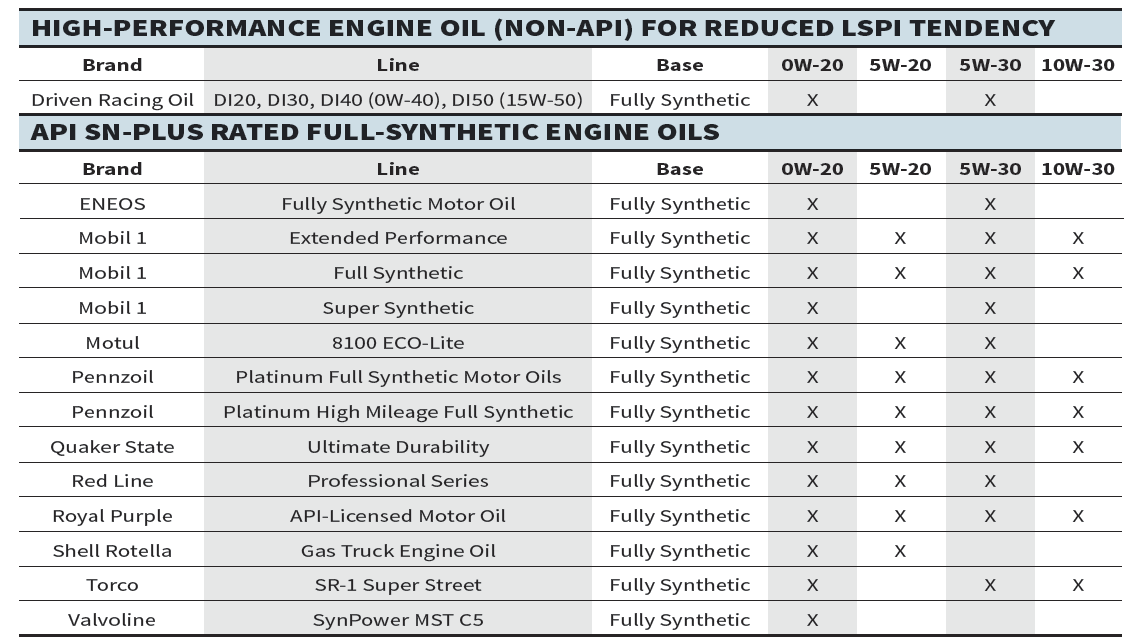 *These are some of the popular high-performance (Non-API) and SN-Plus engine oils specifically formulated to reduce LSPI tendency. Be sure to check with your preferred engine oil company to see if they offer an SN-Plus engine oil for your TGDI engine.

Turbocharged direct-injection engines offer levels of performance and efficiency never before achievable with port fuel injection. However, there are considerations that were not fully addressed with direct-injection until this technology hit the roads. While more and more people are learning about the issue of excessive intake valve deposit formation on DI engines, fewer people are aware of the LSPI danger that exists. Selecting an engine that is factory equipped with both port- and direct-injection eliminates the intake valve deposit issue. This can also be addressed by adding a water-meth system or additional port fuel injection to the engine. A far more serious problem with TGDI engines is LSPI. Using the right oil, highest octane fuel and the right mix of aftermarket performance upgrades can virtually eliminate any chance of LSPI ruining your day.