Prudence demands that you protect your investments. When that investment is your vehicle’s paint, it’s easy to see how difficult it is to defend. Rock chips, oxidation, ultraviolet light, bird droppings, sap, tar, brake dust…the list is long and harrowing. Fortunately, paint-protection technology has come a long way. Prior to the 1990s, defending your paint job was limited to washing/waxing, a car bra, a car cover or parking in a garage. While these methods do a reasonable job, there are obvious limitations: Waxes need to be reapplied periodically, a car bra is as attractive as a thick and bulky case for your smart phone, a car cover is really only viable right after a car had been washed, and covered parking is not always an affordable option for every enthusiast. Text by Richard Fong // Photos by Richard Fong and CCL Design

Originally pioneered by the military in the late 1960s and early 1970s, clear adhesive film technology started being used on racecars in the 1980s. In the 1990s, consumer-grade paint protection film (PPF) technology began to catch on, offering a clear, adhesive, protective layer over the paint. However, these early films were far from perfect. They were difficult to install and, over time, shrinking, yellowing and excessive “orange peel” could be observed. Subsequent removal and reapplication of new film was an additional expense and inconvenience to the owner. 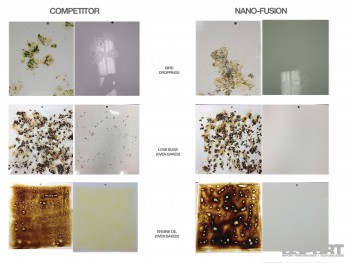 Paint protection film consists of a urethane layer with a protective outer coating. Some of the earlier paint protection film products featured a “stiff” topcoat layer above the urethane film. This topcoat provided protection from the elements and chemicals, but often became brittle and would turn yellow over time. In addition, these films would be difficult to apply, and some had surface texture that made them easily visible. Fast forward a decade and products inevitably improved. The latest in paint protection technology comes from CCL Design. It’s paint protection development, Nano-Fusion PPF, features “nano” technology, where a pliable, protective layer is infused into the urethane film. According to Nano-Fusion films, impregnation of the urethane film offers improved strength and longevity, while easing the process of installation. The result is a product that is easier to apply, chemical resistant and feels smooth as a Teflon® finish. 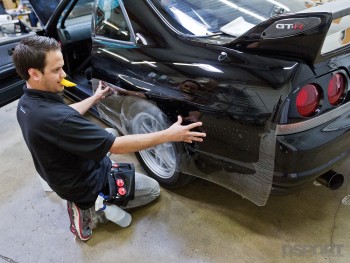 The process began with cleaning each panel just before applying the film to the surface. Nano-Fusion offers its films in a variety of widths up to 60- inches, making it possible to cover even the largest of panels with a single piece of film. There are no ugly seams to be concerned about. Once a panel was cleaned and measured, a piece of film was cut to the approximate size. With the film backing removed, a solution of baby shampoo and water was sprayed generously over the panel, and the film was placed and aligned. Next, an anchor point (starting point) was chosen, and an alcohol solution was sprayed under the film to activate the adhesive. With the excess soap solution and alcohol solutions squeezed out from under one portion the film, more alcohol was sprayed onto the panel and all of the soapy water squeezed out from under another portion. With all of the bubbles and creases smoothed flat, the excess film was trimmed. 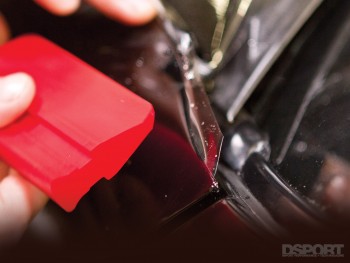 Harriman carefully left some extra material, so that he could wrap the edges for a more refined finish. With the help of a heat gun and the alcohol solution, the adhesive around the edges was activated. While the process of applying the film took little less than a day to complete, the adhesive requires at least one to two days curing time in the sun before it was considered ready for use. After baking in the California sun, the D’Garage RH8 Skyline GT-R’s new protective layer was ready for its first car wash. The film is smooth to the touch and complements the R33’s mirror-finish paint job. Backed by the confidence of a lifetime guarantee (when installed by an authorized dealer), the RH8 GT-R is ready to hit the track with the confidence that the paint won’t be compromised by track debris. 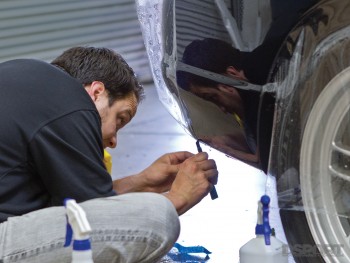 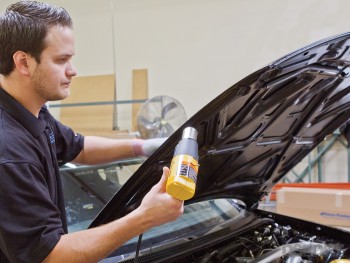